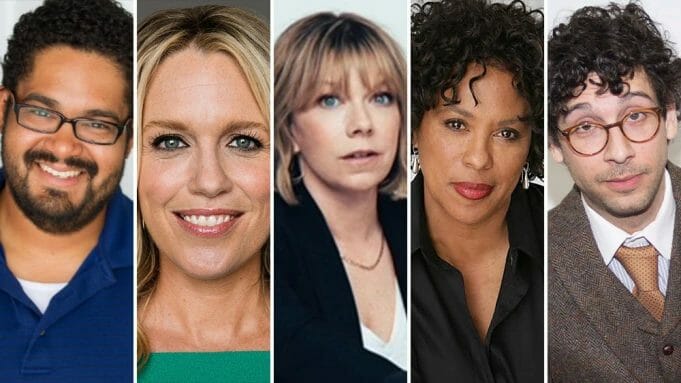 Josh Banday (Upload), Jessica St. Clair (Avenue 5), Mary Elizabeth Ellis (It’s Always Sunny in Philadelphia), Angela Gibbs (This Is Us), and Rick Glassman (As We See It) have joined the cast as series regulars for the ABC single-camera comedy pilot “Not Dead Yet.”  They will star opposite Gina Rodriguez (Jane the Virgin). The project hails from writing duo Casey Johnson and David Windsor (Greek, Don’t Trust the B—- In Apartment 23) and is executive produced by McG (Charlie’s Angels, Turner & Hooch).

“Not Dead Yet “follows 40-something Nell Stevens (Rodriguez), who is down on her luck, low on cash, and newly single. When she lands the only job she can find, writing obituaries, she starts receiving life advice from an unlikely source.

Banday will play Dennis, Nell’s old friend, former roommate and now current boss. Dennis used to be a nerd, but now is cool. He hired Nell because she is overqualified, desperate and introduced him to his husband.

St. Clair portrays Annabel, an earthy, beautiful yoga studio owner and mom friend of Fiona (Ellis). She is into mindfulness and healing but sometimes doesn’t take her own centering advice. Nell’s return makes her jealous, although she’d never admit it.

Ellis’ Fiona is Nell’s BFF since childhood and into their partying 20’s. Yin to each other’s yang, Fiona always centered Nell while Nell brought out Fiona’s fun side. Now that Nell’s back, their lives are very different. Fiona has a seemingly perfect life with a husband and family that Nell envies. But Fiona’s truth is she feels a little trapped in that life – something Nell can hopefully help shake up.

Glassman plays Edward. An uptight, smart environmental lawyer, Edward is Nell’s landlord and roommate. A Stanford graduate, he is married and has a son who lives outside of the city. He spends weekends with them, but during the week is a thorn in Nell’s side due to his inflexible house rules and commitment to recycling and the environment. But there is something sweet underneath Edward’s slightly superior exterior and he and Nell will come to realize they’re more alike than they thought.

The pilot is based on Alexandra Potter’s romantic comedy novel Confessions of a Forty-Something F—k Up which was published in 2020.

Gibbs’ credits include This Is Us, Hacks, S.W.A.T. Bosch, NCIS, On My Block and films such as Love Jacked, Straight Outta Compton, Stone Cold Christmas, Think Like A Man.

Glassman is a writer, comedian, and actor who can currently be seen in Jason Katims’ Amazon series, As We See It.