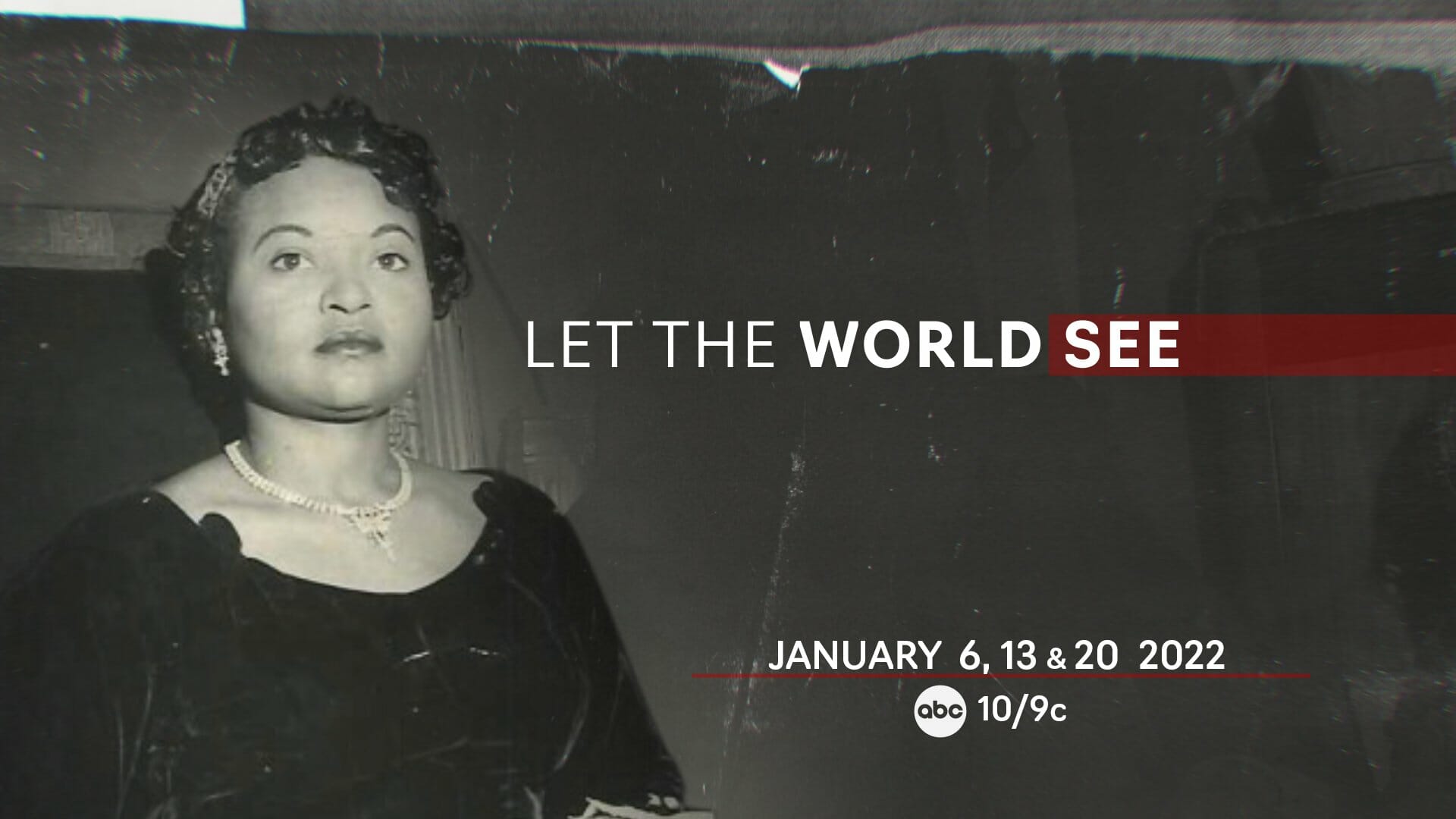 ABC News announced today the special limited docuseries “Let The World See,” produced in association with Shawn Carter and Roc Nation, Will Smith and Westbrook Studios, and Aaron Kaplan and Kapital Entertainment. The series will chronicle Ms. Mamie Till-Mobley’s fierce quest for justice that sparked the civil rights movement after her son Emmett Till’s brutal murder, inspiring heroes like Ms. Rosa Parks and others to stand up boldly for their rights. “Let The World See” premieres Thursday, Jan. 6 (10:01-11:00 p.m. EST), on ABC and will air for three consecutive Thursday nights following each new episode of ABC’s upcoming limited series “Women of the Movement,” also produced by Roc Nation, Westbrook Studios and Kapital Entertainment. “Women of the Movement” is based on the true story of Ms. Mamie Till-Mobley’s journey from reserved mother to outspoken activist in the wake of her son Emmett Till’s brutal murder in the Jim Crow South. Watch episodes of both limited series on demand and on Hulu the day following their premieres.

“Let The World See” is a fresh and deep examination of Ms. Mamie Till-Mobley’s fight to bring her son’s body home to Chicago and her pivotal yet heartbreaking decision to have an open-casket funeral for the public to see, which ultimately served as a turning point for the civil rights movement. The docuseries also traces Ms. Mamie Till-Mobley’s journey back to the Jim Crow South to face her son’s murderers in court. The program will illustrate how the Till family has continued her legacy since her death in 2003, remaining active in the movement as the deaths of Trayvon Martin, George Floyd, Ms. Breonna Taylor and others sparked protests around the country.

Weaving together first-hand accounts from Emmett Till’s family, “Let The World See” includes interviews with Emmett Till’s cousins Rev. Wheeler Parker, who was a witness to the abduction, Ms. Ollie Gordon and Amos Smith, and Ms. Thelma Wright, Ms. Mamie Till-Mobley’s cousin. The docuseries also features interviews with Rev. Jesse Jackson, activist and friend of Ms. Mamie Till-Mobley; FBI agent Lent Rice, who was a part of the team that opened a new investigation into Emmett Till’s case more than 50 years after his death; journalist Dan Wakefield, who covered the Emmet Till murder trial; and Ms. Betty Pearson, who watched the Emmett Till murder trial in the courtroom more than 60 years ago. The special programming also highlights deeply personal insights from contemporary authors, including Ms. Angie Thomas (“The Hate U Give”), Christopher Benson (“Death of Innocence”), John Edgar Wideman (“Writing to Save a Life”) and Michael Eric Dyson (“Long Time Coming”), who visits the scene of the crime for a special reading of his “Letter to Emmett Till.”

You can watch a sneak peek of “Let The World See” below: