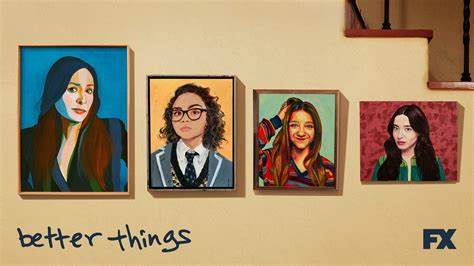 Disney+ has announced the full list of everything coming to Canada in May 2022 including premieres of new Disney+ Original Series, additional episodes of fan-favorite series, and new library title additions.  One of the library titles that will be added to the service next month is Season 5 of “Better Things” which arrives on Wednesday, May 4, 2022.

“Better Thing”s is the story of Sam Fox, a single mother and working actor with no filter, raising her three daughters in Los Angeles. She also looks after her mother, an English expat who lives across the street. Whether she’s earning a living, navigating her daughters’ changing lives, or trying to have one of her own, Sam approaches every challenge with fierce love, raw honesty and humor.

The award-winning comedy series is directed by, produced by and stars Pamela Adlon.

“Better Things” is produced by FX Productions.
Seasons 1-4 are available to stream on Hulu in the United States and on Disney+ internationally in several countries including Canada and the UK.