Cathy Bui (All I Ever Wanted), Lynn Kim Do (FBI: Most Wanted), and Jazelle Villanueva are set to lead in Freeform’s Asian coming of age story “AZNBBGRL.” The hourlong drama comes from Natalie Chaidez (The Flight Attendant), Dinh Thai (Wu-Tang: An American Saga), and producer Melvin Mar (Fresh Off the Boat).

Set in the vibrant Vietnamese community of Little Saigon in Southern California’s Orange County, “AZNBBGRL” is a coming-of-age story about three Asian American teenagers driven by a desire to break free from generational expectations and carve out their own place in the world. Together, these three very different women find escape and form a bond deeper than family when they become entangled with a street gang that offers them a way out.

Bui will play Anh, a hard-working girl focused on getting into a top college. However, her dream is derailed when she and her best friend Jenny are forced into a scheme that leads them to a street gang.

Do stars as outspoken Jenny, born to a well-off family, but constricted by her parent’s expectations. When a traumatic event leaves her emotionally scarred, Jenny enlists her best friend Anh in a dangerous plan.

Villanueva portrays Dang-Dang, a ferocious young woman who can’t seem to escape her troubled past. Dang-Dang is initially at odds with Jenny but forms a surprising and deep friendship with Jenny and Ahn. 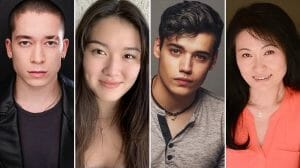 Nguyen-Duy will star as Richie, a rising member of a local street gang with musical aspirations. Anh and Jenny are surprised to learn Richie is their former classmate, who has transformed from a nerdy kid to a charming young man.

Akara plays Gabriel, Anh’s ex-boyfriend who’s still in love with her, but his parents’ overly conservative views pose complications. Huynh will portray Bella, Jenny’s younger sister who presents a perfect front for her parents but relaxes into the snarky teen she really is away from their eyes. Ly portrays Ah-Yee (Anh’s aunt), a strong-willed Chinese Vietnamese American restaurant owner who’s blindsided by an extortionist.

The project is written by Chaidez and Thai, who executive produce along with Kai Yu Wu (The Ghost Bride) and The Detective Agency’s Mar and Jake Kasdan.