Skip to content
Home » Blog » ‘Diary Of A Wimpy Kid: Rodrick Rules’ New Song “Can You Smell Us Now” Released 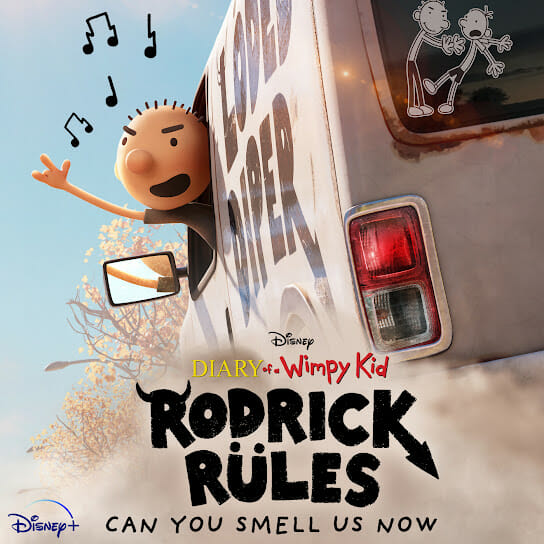 The new song “Can You Smell Us Now” has been released from the new animated adventure from the Diary of a Wimpy Kid franchise, “Diary Of A Wimpy Kid: Rodrick Rules” which will premiere on Disney+ on Friday, December 2, 2022.

The news was shared by Hollywood Records on social media.  The song is available on a variety of platforms including Spotify and YouTube.  Check out the tweet below:

It’s time for NEW rules! 🤘🎸 Listen to the new song “Can You Smell Us Now” from Diary of a Wimpy Kid: Rodrick Rules now: https://t.co/q2Wg2o7Vxt

Diary of a #WimpyKid: Rodrick Rules, an all-new Original movie, is streaming December 2 on @DisneyPlus. pic.twitter.com/IPjmBF2XN3

In the first “Diary of a Wimpy Kid” movie, Greg Heffley is a scrawny but ambitious kid with an active imagination and big plans to be rich and famous – he just has to survive middle school first. To make matters worse, Greg’s lovable best friend Rowley seems to coast through life and succeed at everything without even trying! As details of his hilarious – and often disastrous – attempts to fit in fill the pages of his journal, Greg learns to appreciate true friends and the satisfaction that comes from standing up for what is right.

“Diary Of A Wimpy Kid: Rodrick Rules” is based on the second book in Jeff Kinney’s bestselling book series and focuses on Greg Heffley’s complicated relationship with older brother Rodrick, a lazy and undisciplined high school student who spends way too much time practicing with his rock band.