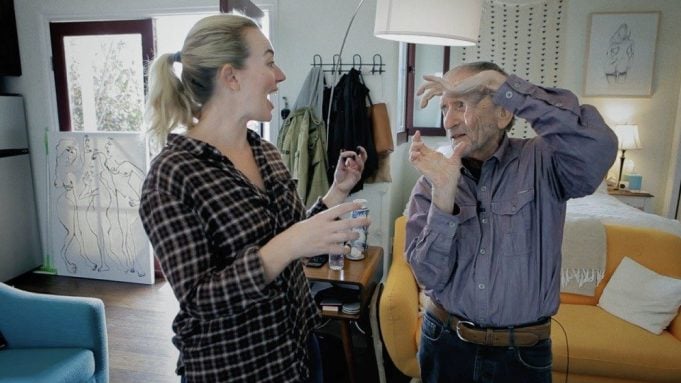 Disney Branded Television has acquired the rights to the documentary short Sophie & the Baron, under the newly formed Disney Original Documentary banner.

According to Deadline, Sophie & the Baron tells the story of the unlikely friendship between iconic Rolling Stone magazine photographer Baron Wolman and artist Sophie Kipner, which blossomed as the former’s career was winding down, and the latter’s was just beginning. It takes viewers on an uplifting journey into an artistic collaboration that transcends eras and mediums.

Wolman served as Rolling Stone magazine’s first chief photographer between 1967 and 1970, capturing images of music icons including Janis Joplin, Jimi Hendrix and Mick Jagger, among others. He also captured some of the most iconic images from 1969’s Woodstock.

Kipner’s lifelong passion for art wasn’t fully unlocked until she discovered a unique talent for blind contouring—the technique of not lifting the pen or looking at the canvas to draw her subjects. A chance meeting with Wolman in London led to a collaboration neither expected as she endeavored to reinterpret some of his most iconic images of artists including Joni Mitchell, Johnny Cash and Jimi Hendrix, in her own trademark style.

“Baron reminds us that assuming success is often a substantial step in eventually achieving it. Baron not only trusted Sophie but empowered her to make wonderful new art inspired by his iconic photographs,” said Jackson. “They, in turn, trusted and empowered me to tell their story. Their friendship and collaboration transcends eras and mediums and, to me, represents the magic and fun that can come from lifting each other up.”

“I really believe that incredible things can happen when you’re open, not only to opportunities but also to people. You never know who’s going to redirect the course of your life or when that moment will be — and it’s usually when you’d least expect it,” said Kipner. “Being open widens those possibilities. This film is about finding mentorship in the most unlikely place and how it can change your life. And it all starts with saying yes.”

“I could not be more thrilled to launch our new documentary banner within Disney Branded Television with the acquisition of ‘Sophie & The Baron,’” added Disney Original Documentary Vice President Marjon Javadi. “This film captures what we want to stand for at Disney Original Documentaries — hopeful, charming stories with real-world lessons that will inspire audiences of all ages.”