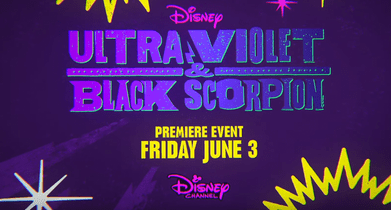 “Ultra Violet & Black Scorpion,” following Mexican American teen Violet Rodriguez who is chosen by a magical luchador mask that transforms her into the superhero Ultra Violet, will follow with two back-to-back episodes at 9:00 p.m. EDT/PDT on Disney Channel. The series will stream shortly thereafter on Disney+.