Skip to content
Home » Blog » Review: Disney+ Original Docuseries ‘Sketchbook’ Brings Out the Artist in All of Us 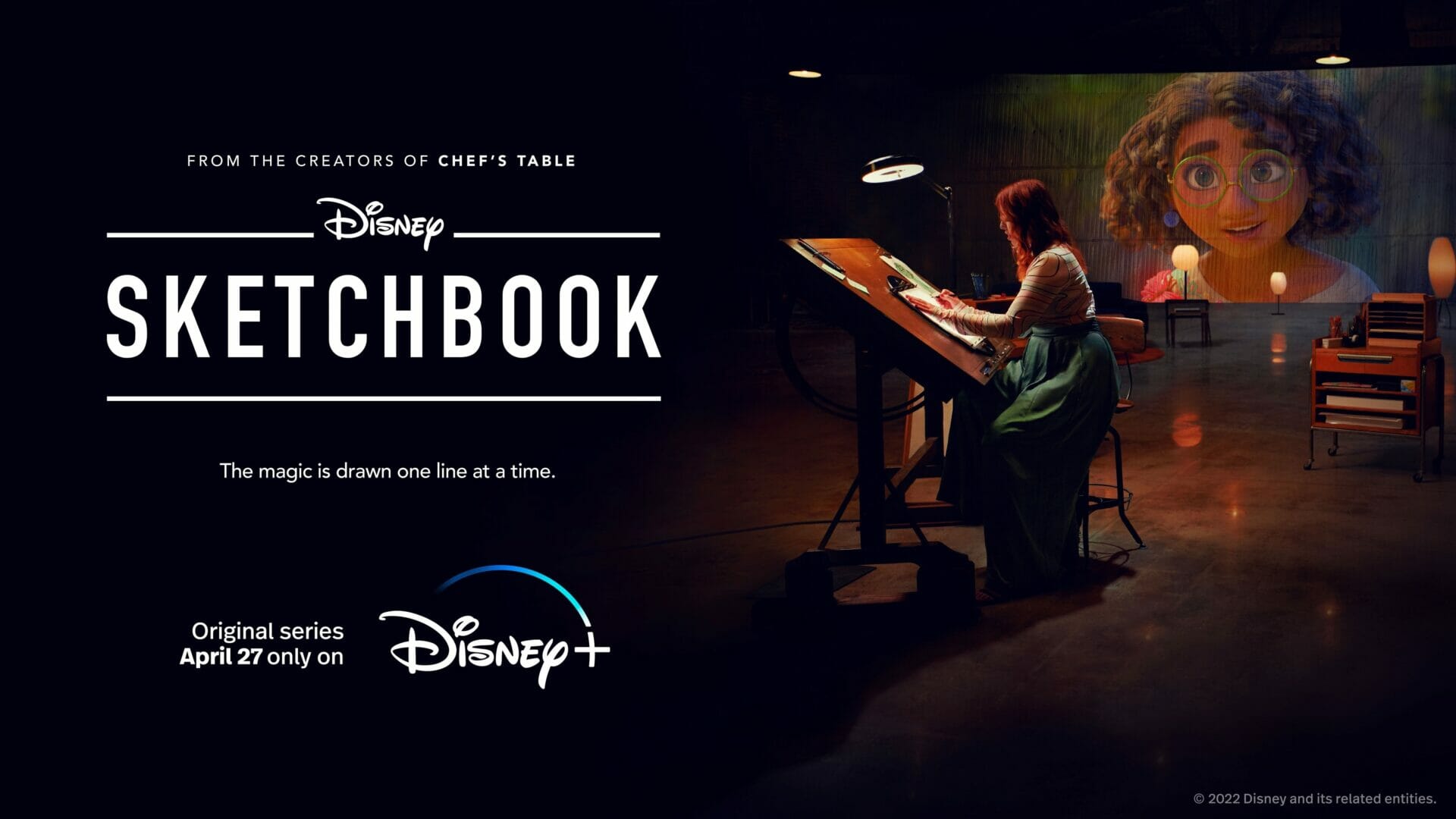 Disney+ invites you to a one-of-a-kind drawing experience in the all-new, six-part Original Series “Sketchbook” with Walt Disney Animation Studios streaming April 27. From Supper Club and in partnership with Walt Disney Animation Studios, audiences will be given an insider’s look into the animation process as some of the Studios’ talented artists teach them how to draw beloved Disney characters, including Kuzco from “Emperor’s New Groove,” Olaf from “Frozen,” Genie from “Aladdin,” Captain Hook from “Peter Pan,” Mirabel from “Encanto” and young Simba from “The Lion King.”

An intimate instructional documentary series, “Sketchbook” takes us onto the desks and into the lives of talented artists and animators. Each episode focuses on a single artist teaching us how to draw a single iconic character from a Walt Disney Animation Studios film. As we learn the steps to drawing these characters, we also discover that the artists themselves each have a unique story to tell about how they made their way to Disney and their chosen character. From the creators of Chef’s Table, this exclusive experience will give viewers of all ages a new understanding of how these beloved characters come to life on screen while introducing them to a new cast of real-life characters along the way.

You can view the episode descriptions below: 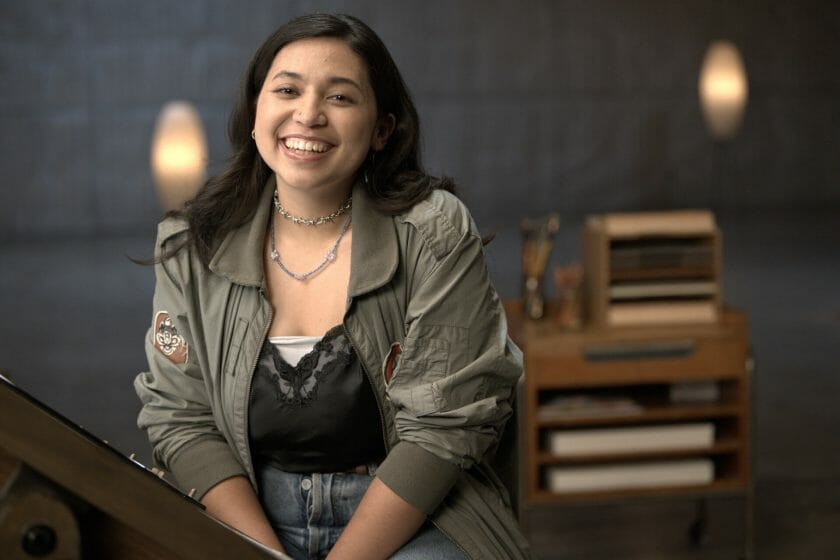 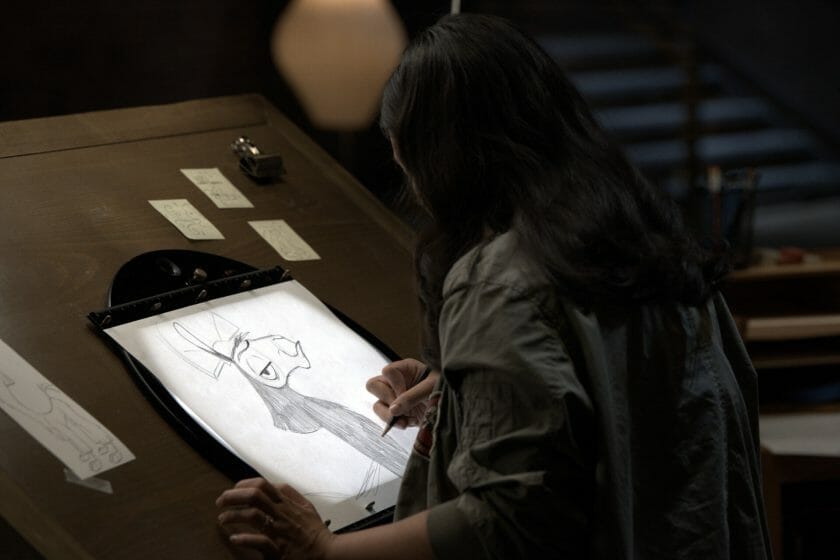 Gabby Capili’s path to Disney Animation began at a young age when she saw her first Disney film in a theater with her father, “The Emperor’s New Groove.” As Gabby teaches us how to draw her favorite character from the film, “Kuzco,” she also shares the importance of following your instincts and being free to let life guide you where you belong.

Gabby tells us that you can do anything that you want to do while drawing and it doesn’t have to be perfect.  Gabby’s tip for drawing a straight line is to use your elbow and not your wrist. 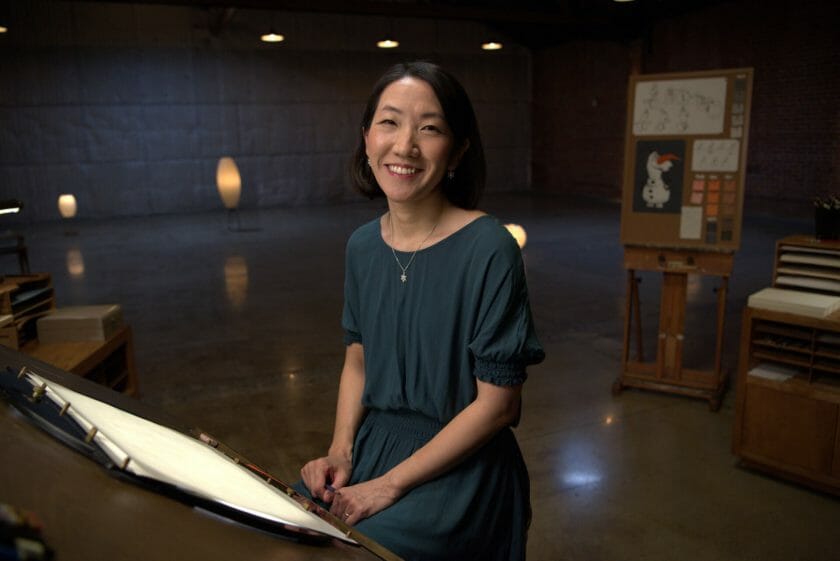 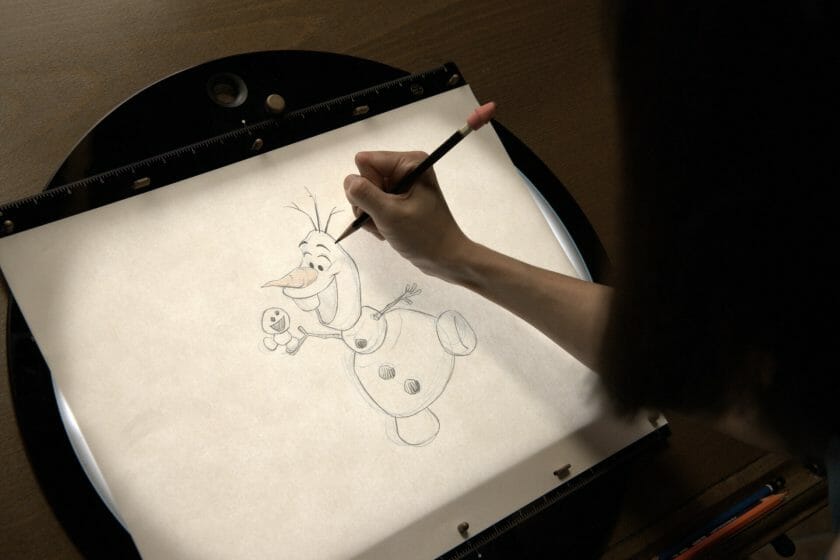 While teaching us to draw one of Disney Animation’s most beloved characters, “Olaf” from the worldwide hit “Frozen” films, Hyun Min Lee shares the joyful wonder of the character and how she channeled personal loss into being a guiding light in her career in animation.

Hyun Min tells us that when developing Olaf’s character, the animators decided that his arms don’t bend unless he’s in his dream world sequence.  Lee’s tip is that you don’t have to draw clean, you just have to draw clear. 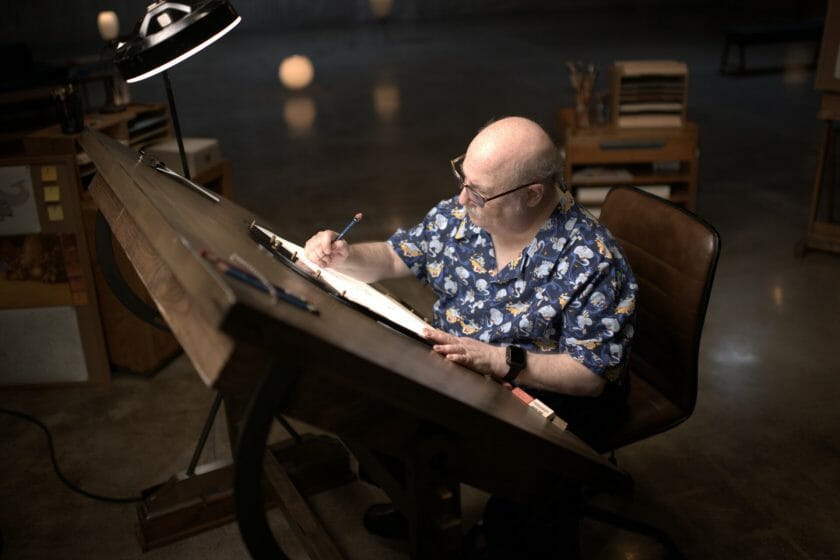 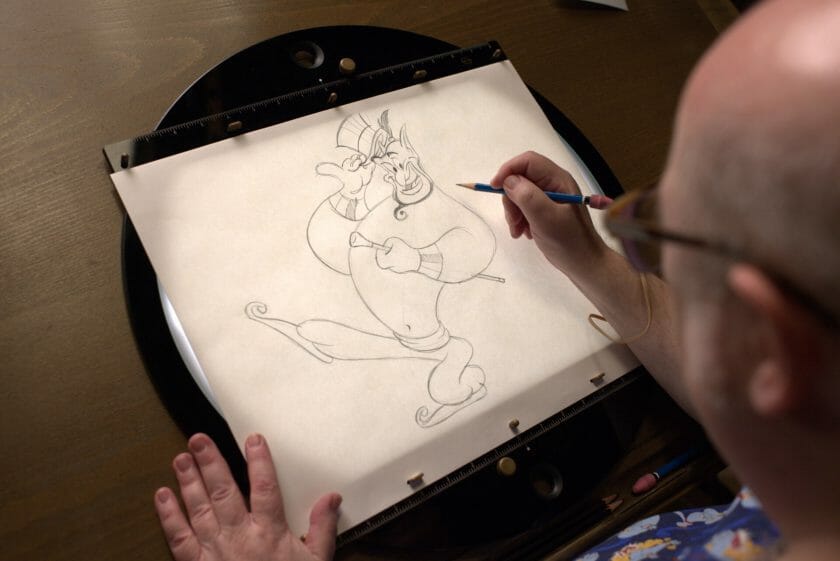 Legendary Disney animator Eric Goldberg guides us through the steps of drawing his most iconic character creation, “The Genie” from “Aladdin” while learning along the way the levels to which Robin Williams impacted the character and its animation.

Goldberg tells us that we can use any kind of paper, pencils or crayons and then you’re basically just drawing lines and connecting them.  Goldberg loves to draw characters that are alive and enjoying themselves by focusing on the character’s attitude and posture. 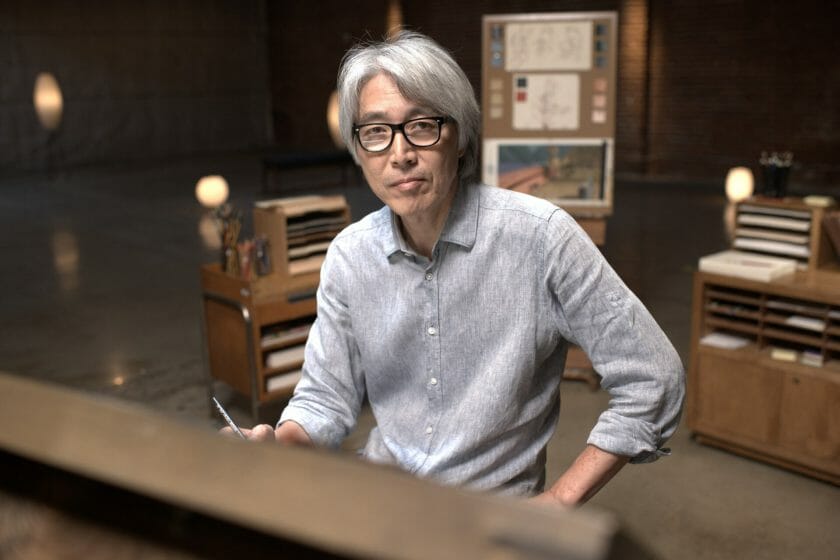 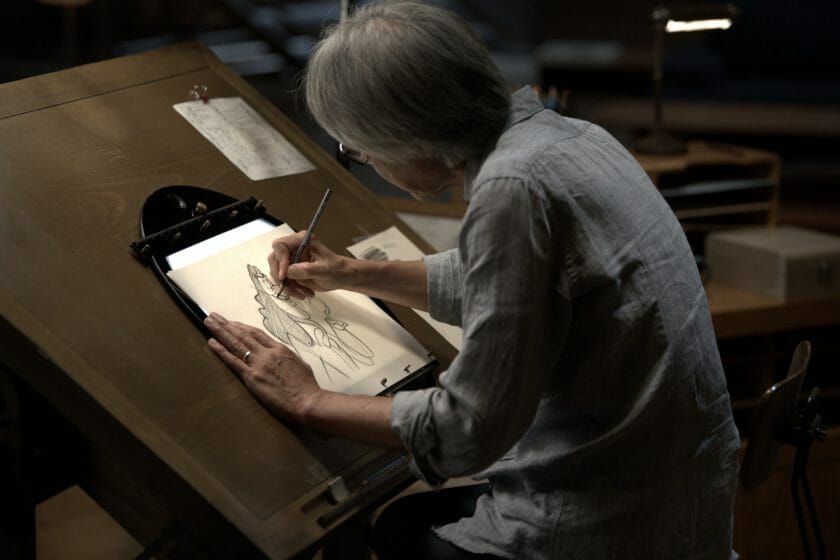 Growing up in South Korea, Disney animator and character designer Jin Kim was always fascinated by the villains of Disney’s films. As Jin teaches us to draw “Peter Pan’s” “Captain Hook” we learn that his journey to America and working at Disney almost didn’t happen because of his colorblindness.

Kim tells us to draw characters based on what they think and not what they do.  He encourages us to save our first sketch and keep practicing and then compare the later sketches to the first one to see how you’re improving. 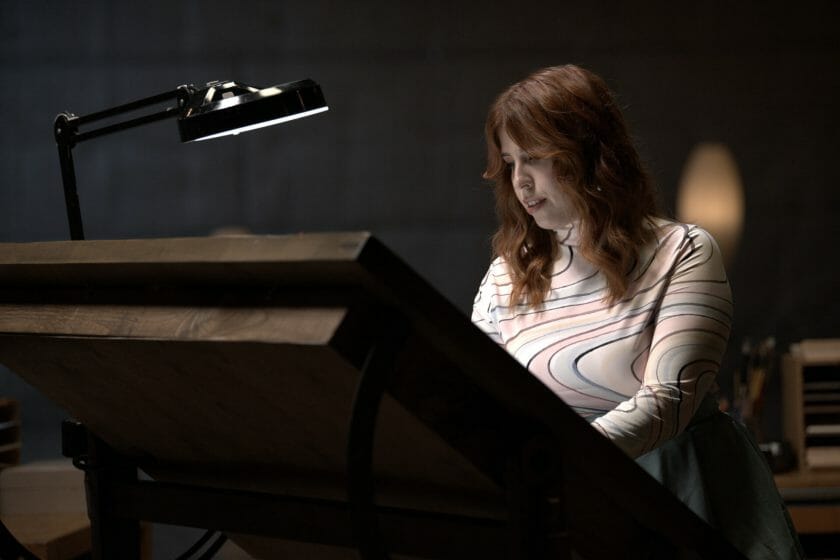 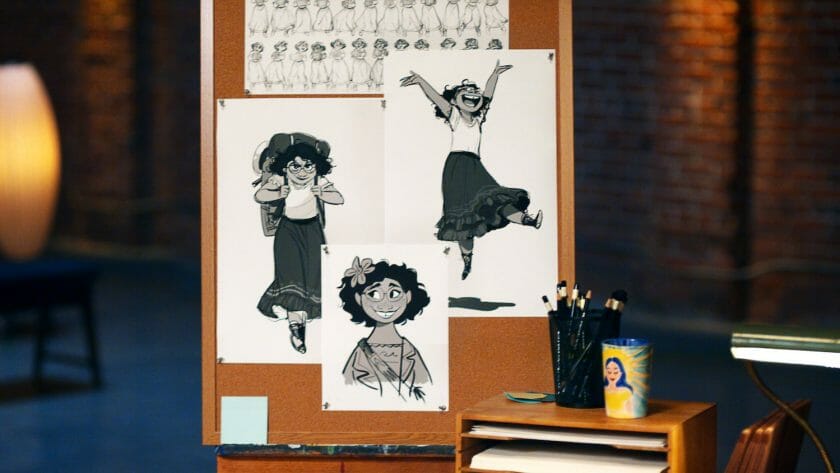 Disney Animation story artist Samantha Vilfort teaches us how to draw one of the Studio’s newest characters, “Mirabel Madrigal,” from the award-winning hit film “Encanto.” Through her story we learn that her connection to Mirabel’s struggle of being different from everyone else in her family hits close to home.

Samantha tells us that drawing is a learnable skill and is a way to take life experiences from your heart and mind to paper.  She tells us it’s ok to make mistakes and that there’s always a second chance. 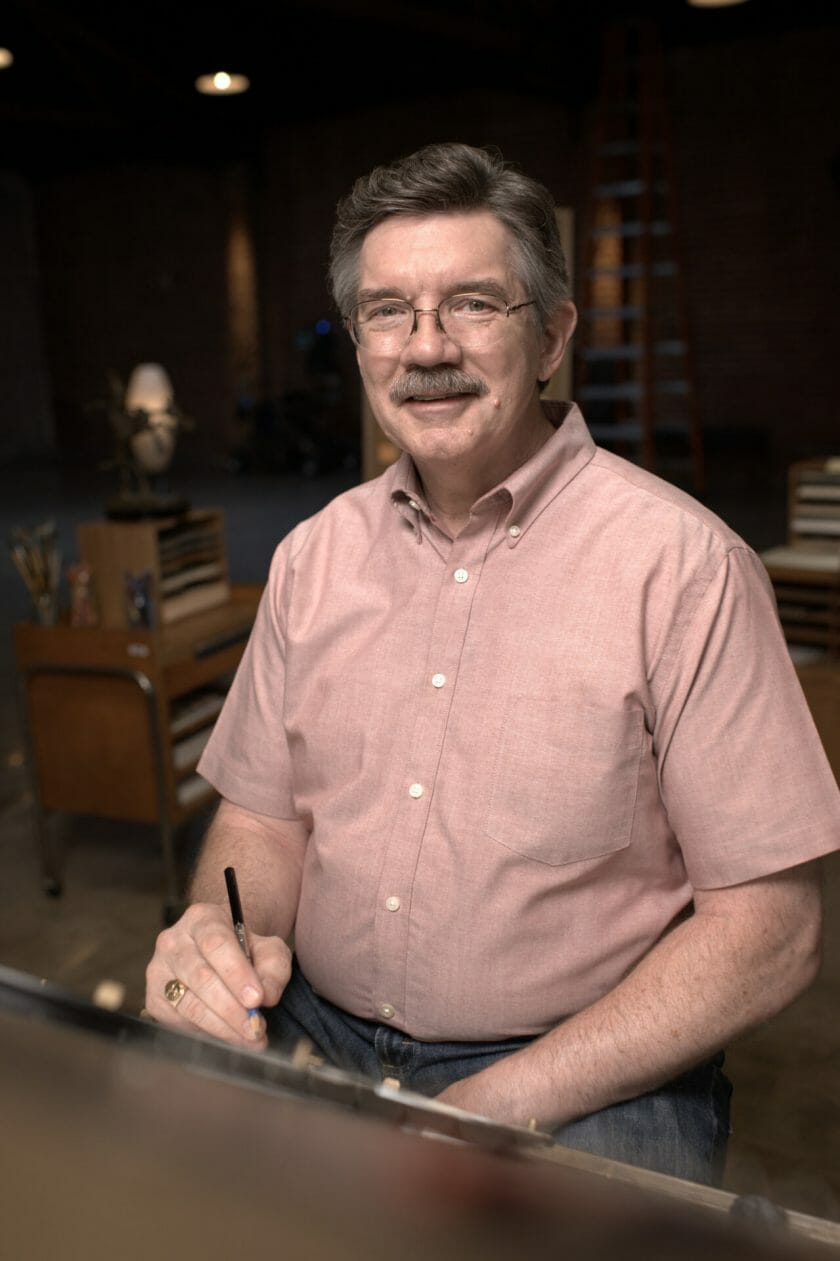 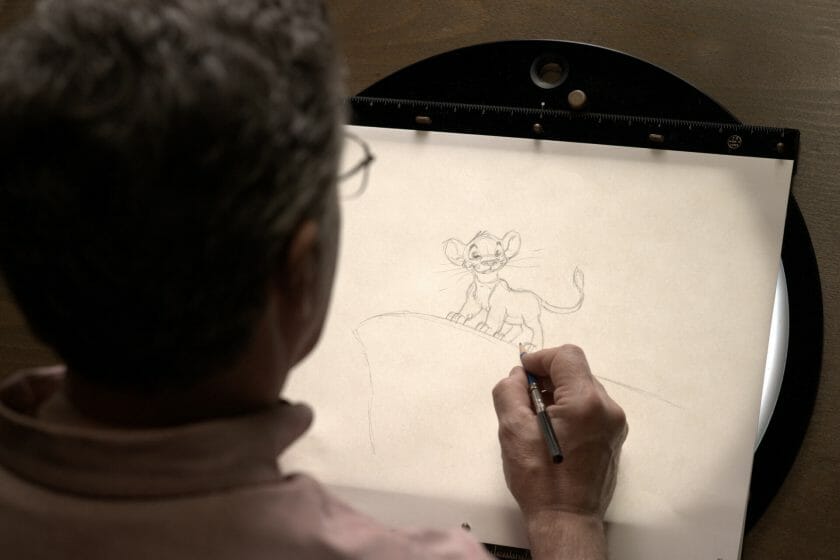 Storied Disney animator Mark Henn teaches us how to draw one of his favorite character designs, “Young Simba” from “The Lion King.” Through Mark’s story, we learn the importance of never giving up on your dreams, even in the face of rejection.

Henn tells us that our characters should be believable and his biggest tip is erasers are your friend, don’t leave home without them!

When we watch our favorite animated movies, we don’t see what happens behind the scenes and the amazing team of people that spend hours of hard work to bring these characters to life.  And then most of their hard work ends up in the trash bin as they go through the process of perfecting every little detail.  “Sketchbook” takes a deep-dive not only into the animated characters but the animators responsible for creating them

“Sketchbook” is reminiscent of an attraction that was at Disney’s Hollywood Studios years ago.  The Animation Academy was located in the now-defunct Magic of Disney Animation pavilion.  Guests were able to sit at back-lit Mickey desks with stools and follow step by step instructions from a Disney animator on how to draw a beloved Disney character.  The 20-minute class was fun, informative, and guests were able to bring their hand-drawn attempts home with them as a souvenir.  “Sketchbook” is a more intimate version of this experience with fascinating stories from the animator woven in between the drawing tutorial.  What’s great about this, is viewers are able to go at their own pace and pause or rewind as needed.  You can also skip to the end of each episode for an uninterrupted look at the step by step process at a faster pace.

You don’t have to be an artist or budding artist to enjoy your hand at drawing these characters.  They all start off with basic shapes which then take on a more detailed appearance.  Practice of course makes perfect, but the beauty is you can rewatch as many times as you want.  Along the way, you also learn more about these fan-favorite characters and what steps the animators took to make their personalities shine and come to life.

“Sketchbook” would be a great activity to watch individually or with a group of friends or the family where everyone could join in and then have fun comparing their sketch with one another.  Just be sure to bring some patience and an eraser.

You can watch the trailer for “Sketchbook” below:

1 thought on “Review: Disney+ Original Docuseries ‘Sketchbook’ Brings Out the Artist in All of Us”