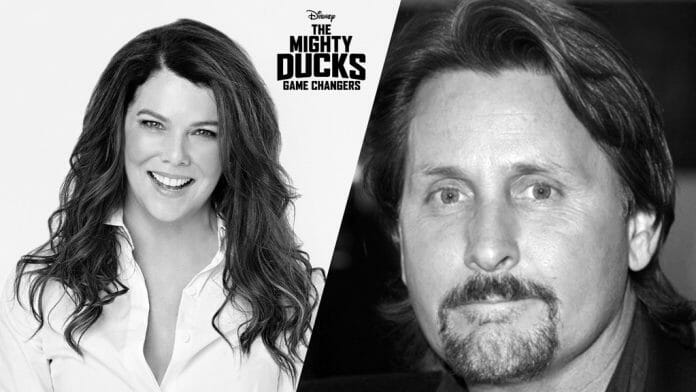 During Disney’s Investor Day presentation, Disney+ shared new details on the new Mighty Ducks series coming to the streaming service.  First off, the title has been set as The Mighty Ducks: Game Changers.

The new series will pick up right where the film left off.  Emilio Estevez is set to reprise his role as Coach Gordon Bombay in the show and he will also serve as an executive producer. The veteran actor will join previously announced series regulars Lauren Graham and Brady Noon. Also joining the cast are Swayam Bhatia, Taegen Burns, Julee Cerda, Bella Higginbotham, Luke Islam, Kiefer O’Reilly, Maxwell Simkins and De’Jon Watts.

Anya Adams has signed on to direct multiple episodes of the upcoming reboot series. Adams is an award-winning Canadian-American director best known for directing “Black-ish,” “Fresh Off the Boat,” “GLOW,” and “The Good Place.”  Emilio Estevez is slated to direct an episode of the show as well.

The Mighty Ducks: Game Changers will feature 10 episodes and is based on the hit ‘90s Disney movie franchise.  Here is the official synopsis from Disney:

Filming for the new The Mighty Ducks series is currently underway in Vancouver, Canada and is scheduled to wrap in December. The series is expected to drop on Disney+ sometime in 2021.

You can watch all 3 Mighty Ducks movies now on Disney+.