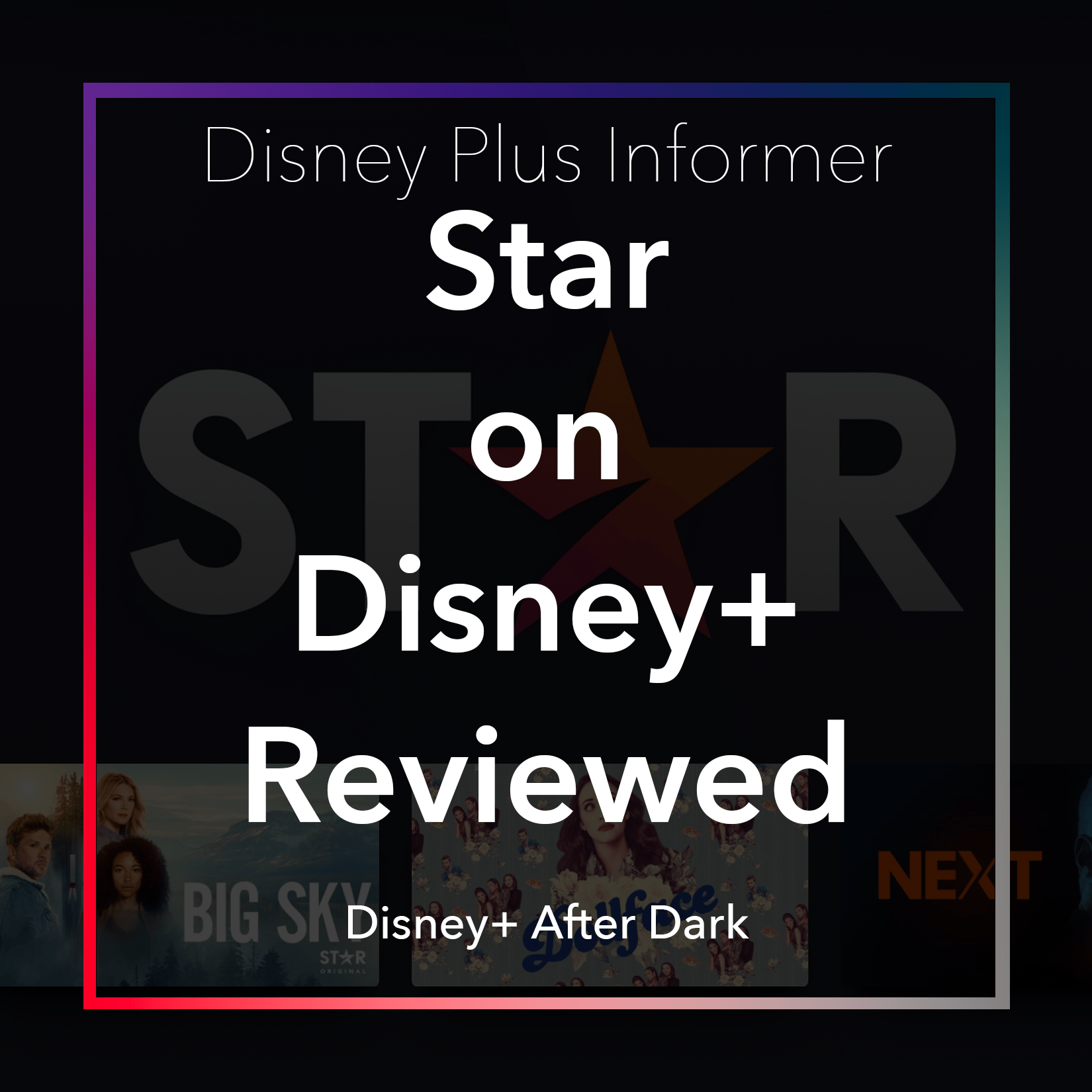 We’ve had a lot of time to go through the new adult-oriented platform on Disney+, Star, and I have some thoughts about it.

Star is the general-entertainment brand developed by Disney to cover all of its mature content.  It is available in every location where Disney+ is, except for the following:

It also isn’t available in any Disney+Hotstar locations because that platform already fully integrates mature content.

Latin America will be getting a separate platform, Star+, which will be very similar to Disney+ except for the mature content.  It will also have live sports and capable of being bundled with Disney+ for a lower monthly fee.

The US doesn’t get Star on their Disney+ app because they have Hulu.  Hulu is partially owned by Comcast and Disney intends on getting full ownership by 2024, meaning it could be at least 3 years before the US could get something like this on Disney+.

As with all content on Disney+, Star content differs from region-to-region.  There are some titles that are available everywhere, such as Love, Victor and Solar Opposites which are marketed as Star Originals.  Star also offers a great library that continually expands week over week with content from Disney’s television and film studios.  Recently, the Oscar-nominated film Nomadland was announced to debut on streaming outside the US through Star.

How Does Star Stack Up?

Having used the service for the past month, I can say that Star exceeds my expectations and then some.  Though it isn’t without its faults, the idea, promise and execution of Star on Disney+ has continued to surprise me.  I’ll go through a few of the things I like, some of the things I dislike, and how I think the service could be improved and expanded upon.

For starters, the interface is familiar.  Because it’s fully integrated into Disney+, there isn’t much to say about it more than I don’t have a learning curve.  Though initial setup was slightly repetitive; entering the password for every single profile on my account was frustrating; I understand why they did it.

Another great thing about Star is its content library.  I’m talking, in particular, about Family Guy, American Dad and Futurama.  The first two out of those shows never had a permanent streaming home in the UK and I think it’s fantastic that they do as they’re all part of my “easy-watch” series.  It’s not just the adult-animation section that makes Star great; there are many huge landmark series that the service can house forever once those pesky co-licensing agreements end with the likes of Netflix and Amazon.  I’m talking shows like Grey’s Anatomy, Glee and (in April) Criminal Minds.

As an extension to that last part, I’m happy to report that Star also doesn’t start you off in the middle of a show.  While it may not contain all of the latest seasons of Disney’s huge series, in the UK Star doesn’t have any titles that begin from the second season.

Whilst Disney+’s biggest draw was its back catalogue, I think Star’s biggest draw is its slate of Originals.  These, unlike Disney+, aren’t beholden to prior franchises in order to hook people.  We’re seeing Disney take a lot of their shows from Hulu and linear US networks and positioning them as “Star Originals”, such as Dollface (Hulu), Grown-ish (ABC), and neXt (Fox).  This is something that I’d love to see more of, but there’s a bad side to it — more on that in a bit.

To sum up the good parts about Star, and there are quite a lot, I think it’s fantastic that we’ve finally got a legitimate competitor to Netflix and Amazon in the UK.

With that said, there are some things I do not like about the service that make me question Disney’s overall strategy here.  First off, some of their Star Originals have already been frustratingly cancelled in the US.  nExt, Helstrom, Filthy Rich (April) are just the first ones. I can understand their reasoning for being branded as Star Originals (they haven’t had an airer outside the US), but I’ll tell you why it’s frustrating.  Disney has stated that they want to have 35 Star Originals by the end of Year 1.  Going through the ones available and announced:

Of those 9 released/announced Star Originals, 3 are cancelled and 1 is a mini-series.  That means that 4 out of the 35 promised Star Originals in Year 1 aren’t worth your long-term investment because they’re never going to come back.  What I don’t like here is the fact that Disney seems to be using Star as a dumping ground for its cancelled shows just to boost its Originals quota.

Another thing I take issue with: Solar Opposites and Love, Victor both have second seasons scheduled to debut all at once on Hulu this year.  With Star, we’re getting them weekly (well, we only know for certain that we’re getting Solar Opposites weekly).  I could buy them releasing the first seasons of these originals weekly when Star launched in order to keep subscribers for longer than a month following the price increase, but it’s frustrating me because we’re getting Grown-ish Season 3 as a Star Original and the other two seasons are dropping as library titles.

Finally, and I think perhaps most importantly, Star has an age-restriction problem.  I’ve written in depth about this over on my site but it’s something that needs to change.  I’m chalking it up to mis-categorisation because there is no way that the BBFC 15 film Can You Ever Forgive Me is rated as a 6+ on Disney+.  This is bad for a number of reasons: whilst a parent may not want their child watching Family Guy but doesn’t care if they watch The Simpsons, there is no way of restricting that profile because both titles are rated at 12+.  It’s also confusing that, if Disney was going to rate these titles at such weird ones, why didn’t they just put them on the service before the launch of Star?

It’s very clear that this is a mistake but the longer it goes on, the harder it’s going to be to fix.

No service is without fault and I think there are some things that Star can improve on.  First off, there has got to be a “New to Star” row on the Disney+ homepage.  At the moment, it’s just the “Star Highlights” row which does nothing to promote when there are new episodes of already released originals.

There also has to be better organisation within the Star tile itself.  The editorialised lists are nice but I don’t think there’s any way to just see everything that’s there without heading over to the Search tab and filtering by every genre.

Disney has stated that when Disney+ (not Disney+Hotstar) launches in new markets, it will come with Star.  I think there are some huge regions that don’t even appear to be on Disney’s roadmap where the service would go down well, like all of sub-Saharan Africa.

What I would like to see from the service is Disney slowly ceasing the distribution of its shows to linear networks and rebranding them as Star Originals with them debuting on the first Friday after their US airing.  That, or Disney could get experimental with release days and do multiple drops each week.  They could even reserve Wednesdays for Star content and Fridays for Disney+ content, that would be nice.

I think Star as a whole is a fantastic offering to the Disney+ platform internationally.  For too long, people outside the US have been treated as virtually non-existent for entertainment/streaming purposes so it’s great to see some preferential treatment thrown our way.  Though Star has its flaws, I can’t fault Disney’s objective here and can’t wait to see how they maximise the utility of the platform for years to come.

If you’d like to see more of these types of articles or want to know the low-down on all your other favourite streaming services, come over to Streamr where we give you just that!  You can also find me on Twitter (@StreamrMo); you can let me know what you think about this article, or do that by leaving a comment!

Huge thanks to Disney Plus Informer for letting me join on today!

The views expressed in this article are the personal opinions of the writer only and should not be construed as the official position of Disney Plus Informer.