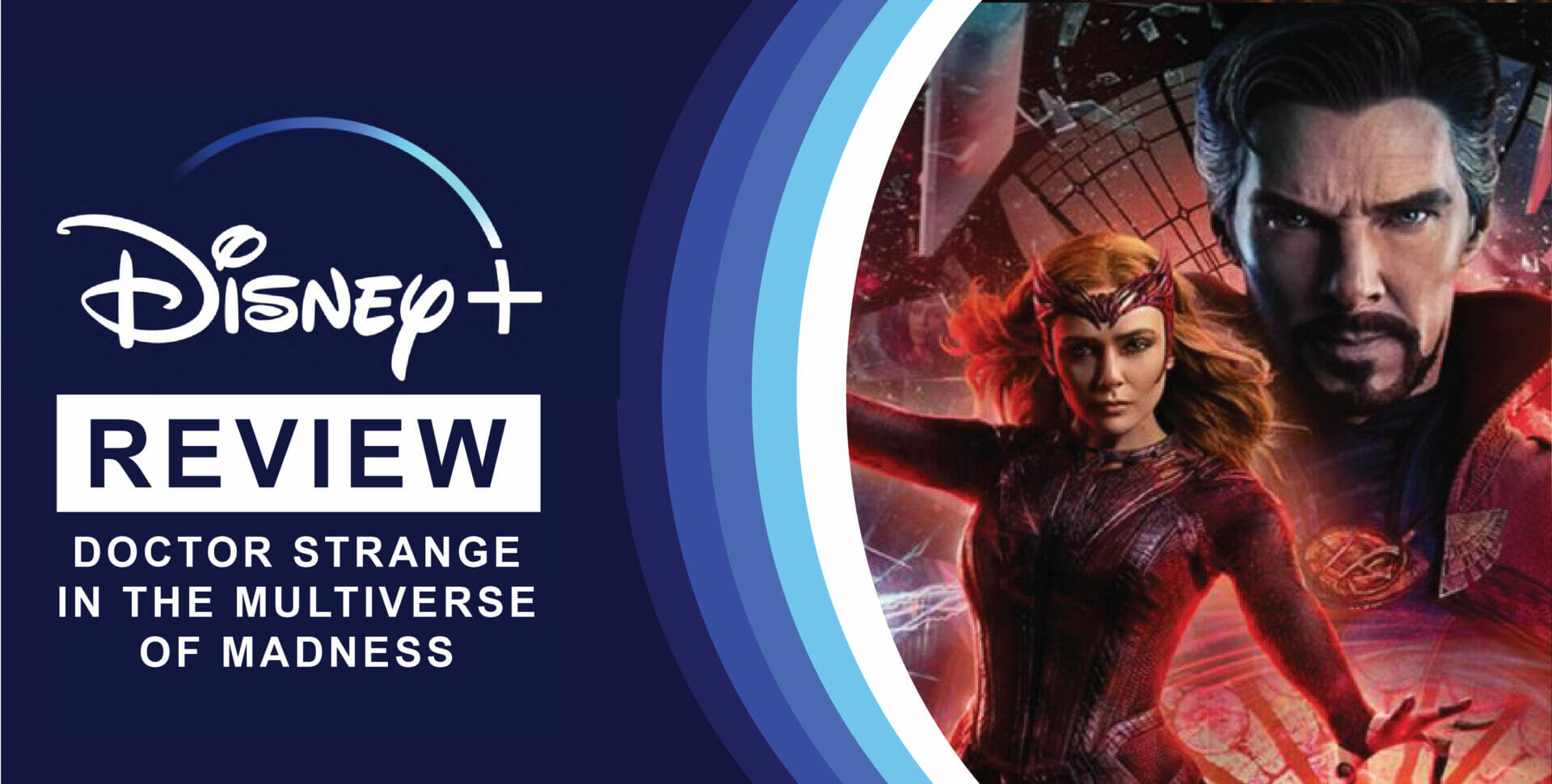 The following review has minor plot spoilers for Dr Strange in the Multiverse of Madness.

Madness is everywhere in Marvel’s latest big-screen blockbuster. If the H.P. Lovecraft-inspired title doesn’t tell you everything you need to know, then the fact it has Sam Raimi directing should more than convince you of just how weird Doctor Strange’s second solo movie will get.

Doctor Strange in the Multiverse of Madness is Marvel’s strangest and darkest film to date – not only is it a blockbuster horror about fractured minds and broken heroes, but it’s also a prog-wizard epic that takes you on a journey through rifts in space and time. Also, don’t forget the 27 other films’ worth of crossover backstory. You’ll not want to blink during the whole 2 hours, because if you do you really will miss something. Smashing a hole straight through the MCU’s phase four, the sequel to 2016’s Doctor Strange follows directly from Spider-Man No Way Home, WandaVision, Loki, and What If…? Casual fans might want to spend a weekend binging what’s come before to enjoy all of the deep cuts this movie offers.

The best thing about the moderately entertaining and highly excessive Doctor Strange in the Multiverse of Madness is that it is a Sam Raimi movie, and it IS a Sam Raimi movie. With a script by Michael Waldron, the writer-producer behind the Loki Disney+ series and Rick and Morty, everything feels like it’s moving at a break-neck pace, and it doesn’t slow down, which the movie suffers for, particularly during its first half.

The story centres around America Chavez (Xochitl Gomez), a scrappy, gifted young hero who cannot yet control her powers, which makes her a target for darker forces that might seek to take and exploit those powers. The plot is typically convoluted, par for the course with Marvel movies, but the real focus of ‘Multiverse of Madness’ is its characters, whose stories are told through a Raimi-like sense of bleak humour.

Doctor Stephen Strange, a flawed hero who often does the wrong thing for the right reason, is played again with one eyebrow permanently raised by Benedict Cumberbatch. This time the surgeon-come-sorcerer learns from an early encounter with America Chavez that there is more than one universe, not just the one that he lives in, but many. More so, each different universe has its own version of Doctor Strange, each one decked out in the trademark red cloak, but not all of them are good. In the universe we know and love, which we find out later, is called Earth-616, a nod to the primary setting of the Marvel comics universe; Stephen Strange must watch his on-off girlfriend, Christine Palmer (Rachel McAdams), marry someone else. With his sharp temperament and big ambitions, Strange lost her. Perhaps there’s another universe in which he can get her back?

That’s not the main focus of Doctor Strange in The Multiverse of Madness, but it sets the stage for some of the movie’s more grounded scenes. Cumberbatch and McAdams give charming performances, interacting on a more human level. Phase four of the MCU has so far been heavily focused on emotion, looking at how these heroes connect and deal with global threats and real-world issues and experiences, like grief and trauma. This movie tries to do that but often, some of its more intimate moments feel lost amongst the madness. One of these moments occurs late in the film, a moment of bittersweet romantic reckoning for both former lovers; it’s intimate and heartwrenching but quickly overshadowed by other goings-on.

Whilst all of this is going on; there is much trouble caused by a grim tiny object called The Dark Hold, also known as The Book of The Damned. Scarlet Witch (Elizabeth Olsen), the semi-villainous alter ego of mum and homemaker Wanda Maximoff, has gotten hold of said book and is trying to use it to control every possible universe to preserve the one in which her young twins are still alive. Her motto through all this is “I’m not a monster; I’m a mother.” But, as I’m sure you can guess by now, she is a monster.

Scarlet Witch – which is the first time we’ve heard her called that name in the movies, partly down to licencing and partly down to how her powers have been written into the MCU, is in full villain mode. She spends a large portion of the movie trance-floating in the lotus position, using a forbidden technique known as dream-walking to further her cause, and she must be stopped. Olsen’s flawless performance aside, this movie lets her down in its pursuit of the concept of a multiverse rather than telling an engaging story. Both Wanda and America Chavez, unfortunately, end up falling victim to the tiresome trope of magical women who are just too powerful for their own good.

Although she is currently tormented with grief for her kids, who she created using magic in WandaVision, what’s seen here is nowhere near as emotionally resonant as what was created with her husband, Vision (Paul Bettany). He’s barely even mentioned and the character arc created for her in WandaVision isn’t built upon. Instead, it’s repeated but in a much less engaging way. She is still an all-powerful witch whose only desire is to live in peace with her family, but this time she’s willing to tear the world apart to achieve it. Rather than feeling sorry for Wanda, caught up in her grief and trauma, her arc here leaves you feeling she can’t be trusted with her powers.

Meanwhile, Doctor Strange comes face to face with the Illuminati, led by his old nemesis Mordo (Chiwetel Ejiofor); this brings a host of cameos who shall remain nameless in the interest of protecting spoilers. The action during this segment is top-notch, as you’d expect from the MCU and signals a shift in tone, geared much towards the darker side of things. It’s pure Sam Raimi and certainly the darkest tone the MCU has ever taken.

What Doctor Strange in the Multiverse of Madness lacks in character-depth, it more than makes up for in style and visuals; sequences like the one in which musical notes are plucked from the air and hurled around are exquisite, as are those involving chases across the multiverse. One of the movie’s most significant selling points is that it is the first film in 9 years directed by Raimi, creator of the Evil Dead trilogy and whose cinematic vision for Spider-Man did so much to set Hollywood onto the superhero path. The film is on-brand for a Raimi outing; candle-lit sequences, reanimated corpses, intense demonic wailing and plenty of the director’s signature “fade and whip cuts.”

There is much to love about Multiverse of Madness, not least the solid performances from everyone involved. Marvel fans will get a real kick out of the cameos, although casual fans may be left wondering whether their appearance was necessary or just idle fan service; perhaps that doesn’t matter, though, as just like the multiverse, things don’t always have to be necessary. An ambitious journey across the multiverse that suffers from its scale, if break-neck action and fan-serve moments made way for more intimacy and emotional connection, we could be discussing one of the best comic-book movies of all time. As it stands, Doctor Strange and the Multiverse of Madness is mid-tier MCU, not quite up there with the likes of Avengers: Infinity War, Winter Soldier or Thor Ragnarok. 6/10.