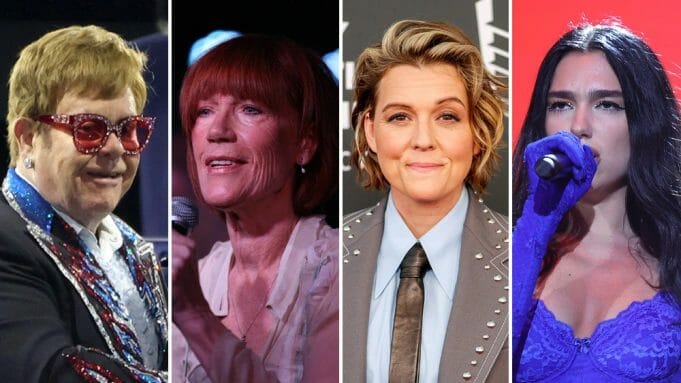 Elton John has announced his surprise guests for “Elton John Live: Farewell from Dodger Stadium” which will live stream on Disney+ on Sunday, Nov. 20, 2022. The final evening of his three stops in Los Angeles as part of his farewell tour will include performances with Dua Lipa, Brandi Carlile and Kiki Dee.

“Elton John Live: Farewell from Dodger Stadium” is a once-in-a-lifetime live, global original concert event that offers fans from around the world a front-row seat to witness the groundbreaking magic of the Rocket Man back at Dodger Stadium.

“Elton John Live: Farewell from Dodger Stadium” will commemorate a watershed evening in music history as it unfolds in real-time at Dodger Stadium, giving fans 50,000+ fans in person and countless admirers worldwide, the rare chance to experience his biggest hits from the past 50 years.

This spectacular evening will serve as a prelude to the highly anticipated 2023 Disney Original Documentary “Goodbye Yellow Brick Road: The Final Elton John Performances and the Years That Made His Legend,” from Academy Award® nominee R.J. Cutler and filmmaker David Furnish. As the official feature on Elton John, “Goodbye Yellow Brick Road” will unveil unseen rehearsal and concert footage over the last 50 years, along with exclusive personal archives and interviews. The definitive portrait of Elton John also will spotlight his final months on the road and a look back at the extraordinary first five years of his career between 1970 and 1975, when he released 10 iconic albums, seven of which went to No. 1 on the Billboard charts to become a global phenomenon. The film will play festivals and have a theatrical run before it streams on Disney+.

You can watch a trailer for the special event below: