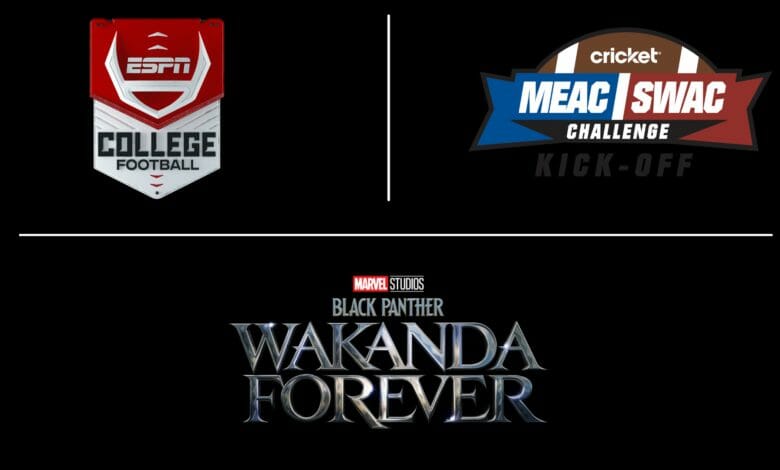 ESPN Events is joining forces with Marvel Studios and The Walt Disney Company on a “Black Panther: Wakanda Forever” collaboration this weekend at the 2022 Cricket MEAC/SWAC Challenge Kickoff, the season-opening college football game between Historically Black Colleges and Universities (HBCU). Elements of the highly anticipated film will be incorporated into the game presentation at the stadium and during ESPN’s national primetime telecast (7 p.m. ET on ESPN) when Howard University faces Alabama State University on Saturday, Aug. 27, at Center Parc Stadium in Atlanta.

With “Black Panther: Wakanda Forever” opening in U.S. theaters November 11, fans will be treated to preview clips of the film both inside the stadium on video boards and within the national ESPN telecast.

The game presentation will begin with a special tease open written and narrated by award-winning journalist William C. Rhoden of ESPN’s Andscape, connecting the spirit of Black Panther’s fictional country of Wakanda to the real-life reflection of the city of Atlanta and the importance of HBCUs within the Black community.

Inside the stadium, fans will be able to pose for pictures at a special Black Panther photo booth, and 15,000 promotional posters will be distributed at the game.

“The upcoming release of ‘Black Panther: Wakanda Forever’ provides a unique and very meaningful opportunity to work with Marvel Studios to bring this first-look engagement moment to our fans,” said John T. Grant, executive director of the Cricket MEAC/SWAC Challenge Kickoff. “There is no better place than Atlanta, which we call Wakanda, and this game platform to integrate such an episodic moment with HBCUs.”

Annually featuring programs from the Mid-Eastern Athletic Conference (MEAC) and the Southwestern Athletic Conference (SWAC), the MEAC/SWAC Challenge Kickoff is one of the marquee events of the HBCU football season. In addition to the game, a variety of special events will take place over the three-day weekend in Atlanta celebrating the tradition, legacy and values of Historically Black Colleges and Universities.