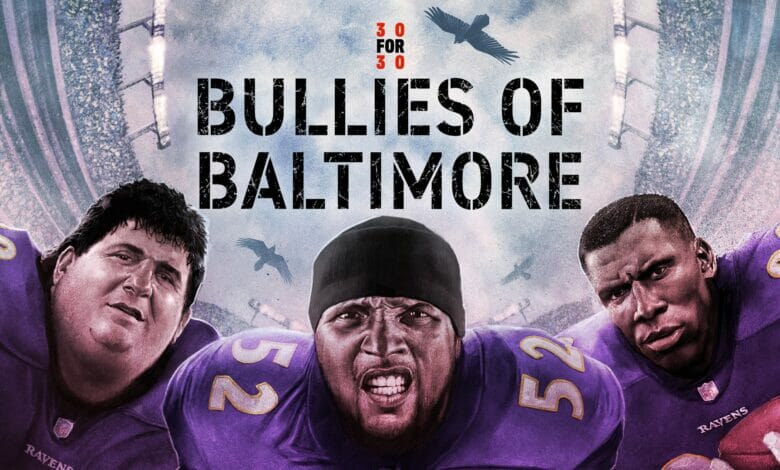 ESPN has released the trailer for the next installment in the Peabody and Emmy award-winning 30 for 30 series, “Bullies of Baltimore,” which will premiere on February 5 at 8:30 p.m. ET.  The film will be available on ESPN+ immediately after its debut.

Directed by Ken Rodgers (“The Tuck Rule,” “The Two Bills,” “Four Falls of Buffalo”) and Jason Weber (“NFL 100,” “The Way Up: Chris Long & The Waterboys”), the documentary is a lively and colorful look back at the team’s magical season framed by a reunion of its key figures filmed in front of a live audience in Baltimore in May 2022. The film will be made available on ESPN+ immediately after its premiere, along with the rest of the 30 for 30 library.

They were arguably the most dominating defensive team in NFL history – and perhaps the most entertaining club that pro football has ever seen. A behemoth on the field that turned into, literally, one of the classic shows of the reality television era. Now, a little more than two decades after one extraordinary season etched their legacy for all time, the documentary tells the story of a Super Bowl champion for the ages.

“We’ll never see another team like the 2000 Ravens,” said co-director and NFL Films VP Ken Rodgers. “If they played in today’s NFL, given the social media landscape, their braggadocious personalities and physical style of play would constantly spawn memes, talk-show controversies and Twitter wars.  No team dominated the sports world, on and off the field, quite like this one.”

Added co-director and NFL Films Senior Producer Jason Weber: “In making this film, we decided the best way to highlight these incredible personalities was to bring them together for a reunion. Being on stage together, just a month before Tony Siragusa passed away, gave them an opportunity to celebrate their glory days in the perfect setting. There was a reason these Ravens were the first team selected for Hard Knocks – they’re a team made for the screen and the stage.”