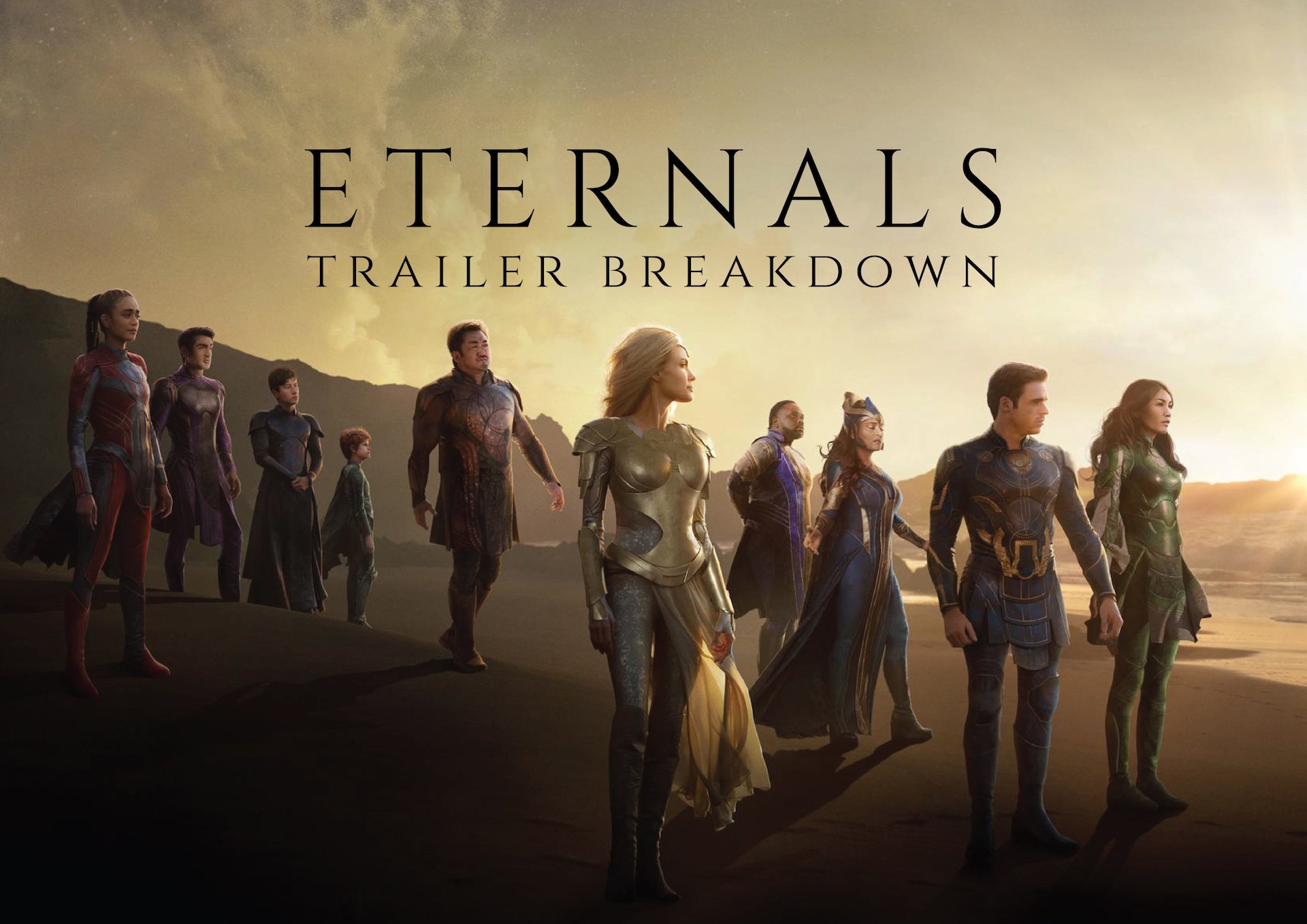 Marvel Studio’s Eternals dropped its final trailer early this morning, giving us a better idea of the film’s plot and where it fits into the wider MCU. That being said, not much is given away in the two and a half minute clip, thankfully though we’ve watched it a bunch of times and here’s our breakdown of everything seen.

If you’re unsure of who the Eternals are, you can check out our guide HERE, as well as a breakdown of the first trailer HERE. Be warned, though, as there are potential spoilers ahead.

The new footage begins with Salma Hayek’s Ajak riding a horse across vast countryside. It’s an extension of a scene from the first trailer, but this time she’s on her way to meet Ikaris (Richard Madden). Ajak informs Ikaris of a considerable threat and the need to reunite their people against it. Ajak is the Eternals’ leader and as well as the power to heal people; she has a deeper understanding of the Celestials. The Celestials are the beings who tasked the Eternals with protecting Earth from predators known as Deviants.

The trailer suggests that it falls to Ikaris to bring his fellow Eternals back together after they were separated many years prior; later footage shows Madden’s character explaining the need for the reunion to an unseen character, possibly Sersi, since she is seen at his side throughout the rest of the footage.

It’s explained by Ajak that when all of the life that Thanos snapped out of existence suddenly came back, the energy surge caused by such a huge event was enough to start something that she refers to as “the emergence” Obviously, this isn’t good, and the Eternals only have seven days in which to save the Earth. So in the first few seconds of the new trailer, we already know that the plot involves bringing the old team back together to fight a threat more significant than anything Earth has ever faced. Wow…

After the Marvel Studios logo, we see what appears to be a brief glimpse at the Eternal’s origin. Narrated by Sersi (Gemma Chan), we also see the team sitting around the image of a Celestial. This could be on board the ship we saw in the first trailer, and I’d bet that it’s a scene where the Eternals communicate with the Celestials.

We get a shot of Ajak receiving a glowing, golden sphere in her body, making her eyes glow as if she’s in some way activated. This could be present-day MCU or could be from the past when the Eternals were given their mission to protect the Earth. A shot of the Eternals triangular ship flying past the sun, presumably on its way to Earth for the first time follows. Likely from the start of the film, this sequence could explain who the Eternals are and why they’re here.

Back on Earth, we get another beautiful wide shot in which we see the Eternals floating down to Earth to join other members of the team. Eternals may be the MCU’s most cosmic adventure yet, but footage seen so far shows lots of very organic, practical shots of stunning landscapes. The look and feel of these shots are director Chloe Zhao’s influence. This kind of cinematography feels very refreshing, especially from the VFX heavy stuff the MCU is known for.

As Sersi explained the Eternals’ arrival on Earth 7,000 years ago, a terrifying creature emerges from the sea. One of the Deviants, it would appear that this footage is from a flashback rather than part of the emergence that follows the undoing of Thanos’ snap.

We then see Ikaris blasting the Deviant with a bolt of energy from his eyes, similar to Cyclops’. He’s wearing his full Eternals cosmic costume, rather than the modern-day clothes we’ve previously seen him wearing. He’s also seen flying towards the creature as it goes into full attack mode. We also see a shot of a boy wearing what looks like ancient clothes, showing us that the scene isn’t from modern times.

We’re then taken to the modern-day MCU, where we see who Sersi has been explaining everything too. It’s Kit Harington, as Dane Whitman, a human who Sersi is dating as she currently lives on Earth as a museum curator. This relationship would likely be frowned upon by the Celestials and possibly the other Eternals. It appears that Dane has just learned of who Sersi is, and he asks the question all Marvel fans asked after the first trailer was released “where were the Eternals when Thanos snapped?” After the question is asked, we see what looks like an Eternal watching as pyramids burn, presumably the result of war. We also see a soldier on horseback attacking civilians and an explosion from a nuclear bomb. These are all tragic events from history where the Eternals didn’t intervene.

A shot of Ajak embracing Brian Tyree Henry’s Phastos, who is seen crying, follows and in the background is an environment that has been destroyed. This shows that the Eternals have witnessed tragedies and are carrying the burden of not helping. This emotional trauma seems like it will be a theme throughout the story.

Sersi explains that they were instructed to avoid interference with human conflicts unless it involved Deviants. Whitman asks who gave the Eternals that mandate. She doesn’t answer, but we see a vast, red Celestial in space, and we know that they tasked the Eternals with protecting the Earth from Deviants.

We then see a brief run-through of the team, separated for hundreds of years, scattered across the Earth as Ikaris sets about reuniting them.

First up is Druig (Barry Keoghan). He’s lost faith in humanity and is rumoured to be the secret villain, although this seems like a misdirect, with the true villain being someone else.

Sprite (Lia McHugh) appears to be a child but is the same age as the rest of the Eternals. She has been a villain in the comics and is mischievous, so she is another possible candidate for the film’s villain.

Angelina Jolie appears as Thena, who we were introduced to in the first trailer. She seems to have isolated herself and isn’t best pleased when the rest of the team find her.

In the same scene, we see that Ikaris has also managed to round up Sersi (Gemma Chan) and Kingo (Kumail Nanjiani).

We see a volcano erupting on an island, yet more devastation witnessed by the Eternals, in which they were unable to interfere. These events seem to add up to the fact that the Eternals might not be best pleased with the Celestials for stopping them from assisting humans. Alongside footage of the Eternals fitting into life on Earth, and the narration talking about saving that which you love, it appears that perhaps the Celestials are what the Earth needs protecting from.

Phaistos is seen summoning the Eternal’s ship from the desert; his powers look like the mystical powers displayed by Doctor Strange. As narration duty is switched to Thena, we hear her talk about loving people and creating a bond with them, which might make watching them perish and destroy each other hard to endure. Sprite is seen putting on a display of fireworks while Sersi braids a child’s hair. During the same speech, we see Sersi stopping a flying double-decker bus from hitting her and Dane, possibly where she has to reveal who she really is.

We see inside the Eternals ship, which features many cosmic spirals, also present in the Eternal’s powers. Kingo is seen blasting away a deviant with energy shooting from his fingers. There is another shot of a different Celestial, green this time, who appears to be creating something from cosmic dust. Back on Earth, Thena is seen unleashing a spear and shield, fighting alongside Gilgamesh (Don Lee), who is barely seen in the trailer.

Up next is a shot of Ikaris dramatically screaming as he blasts energy from his eyes off-screen. This looks like it is from the same sequence where Ajak tells him of the Deviants returning. What is causing this reaction? A possible theory is that Ikaris is the villain who ends up betraying the Eternals; could it be that he kills Ajkak here? She’s one character that isn’t seen in any modern setting beyond this scene.

Thena is seen being held by a giant humanoid Deviant, which matches the concept art already seen. He says that the Eternals cannot protect humans. Could this be the primary Deviant villain? We also see more footage of Ikaris blasting a flying Deviant, struggling to overpower it.

Finally, the trailer closes with some familiar MCU humour and a reference to Black Panther, as Ikaris breaks a table thinking it is made of Vibranium but it is, in fact, from Ikea’s fall collection.

So that’s what we can make out from the final trailer of the Eternals. Did we miss anything important? What are your thoughts? We don’t have long to wait to find out more as Eternals arrives in cinemas on November 5th.