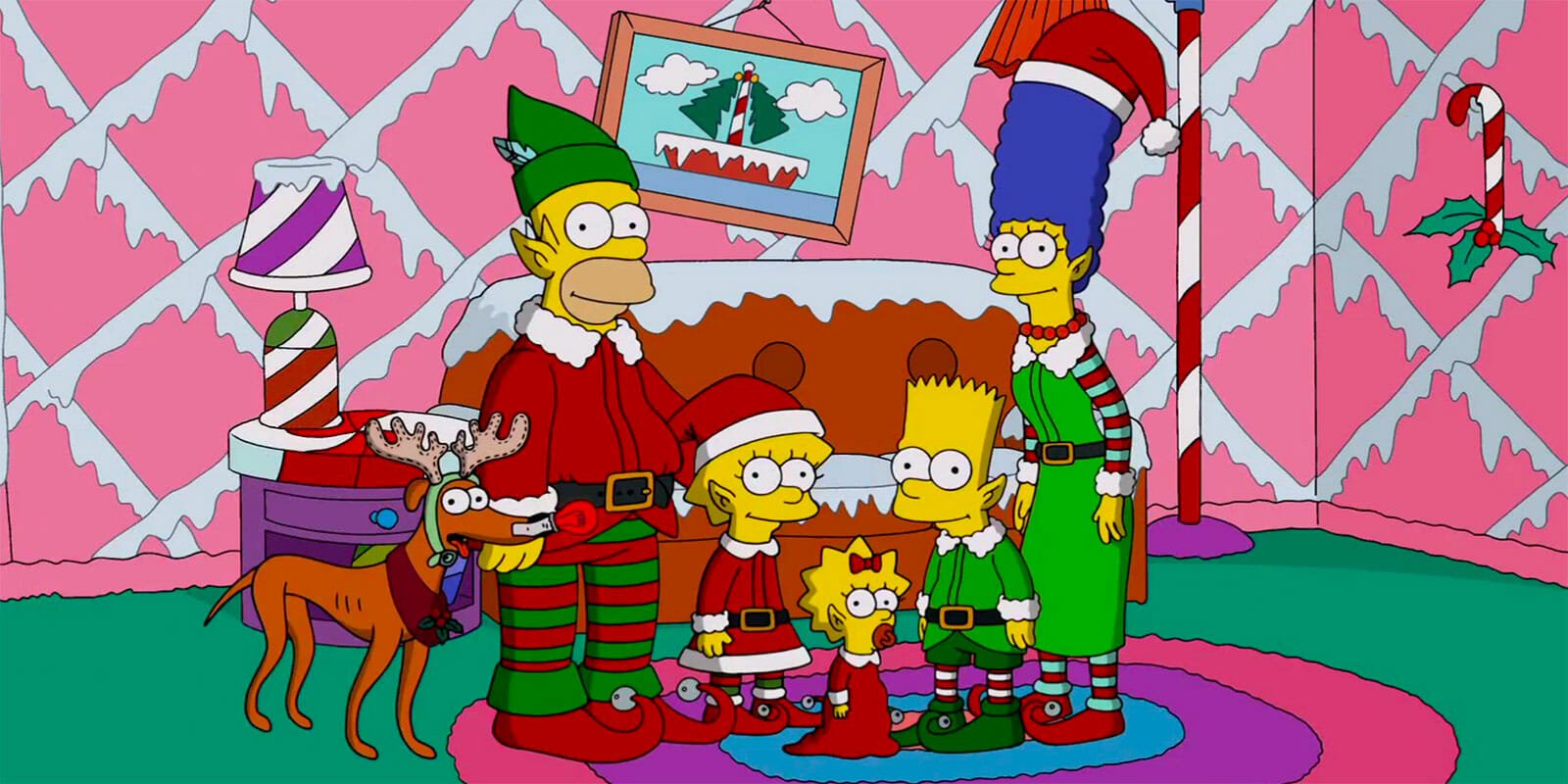 Christmas is quickly approaching, but there’s still time to celebrate the most wonderful time of year with everyone’s favorite animated family….The Simpsons!  Below, you’ll find 17 Simpsons Christmas episodes that are available to stream now on Disney+.  Merry Streaming! 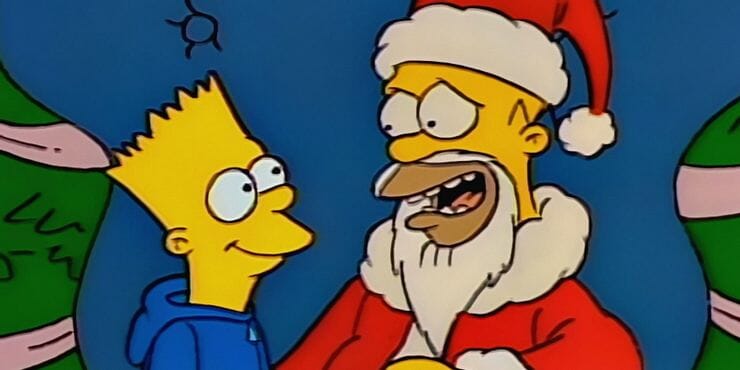 The Simpsons prepare for the holidays, but it’s rough sledding for household-head Homer, who’s forced to resort to desperate measures when his Christmas bonus is canceled and Marge’s family money goes to erase the tattoo son Bart thought would be a perfect gift. 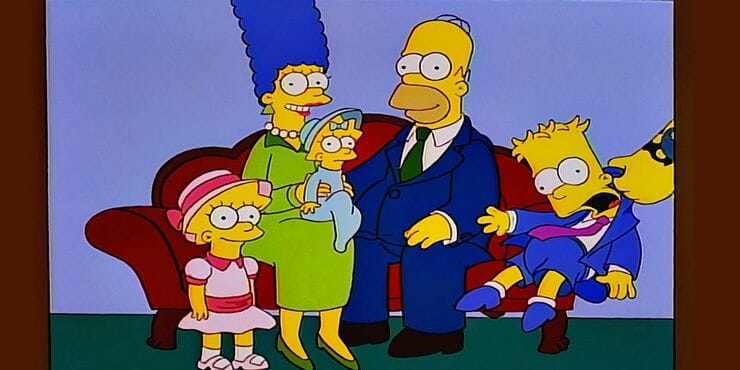 When Bart is arrested for shoplifting, his mother’s disppointment in him is extreme – so a dismayed Bart desperately tries to win back her respect. 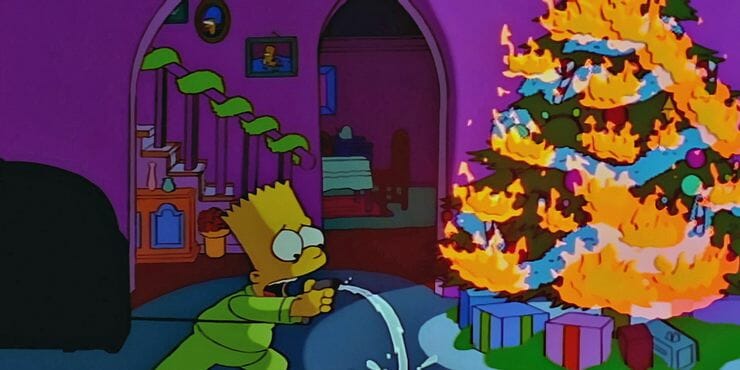 When Bart accidentally burns down his family’s Christmas tree and presents, the whole town chips in to give them a worthwhile Christmas. But his conscience begins to eat at him. 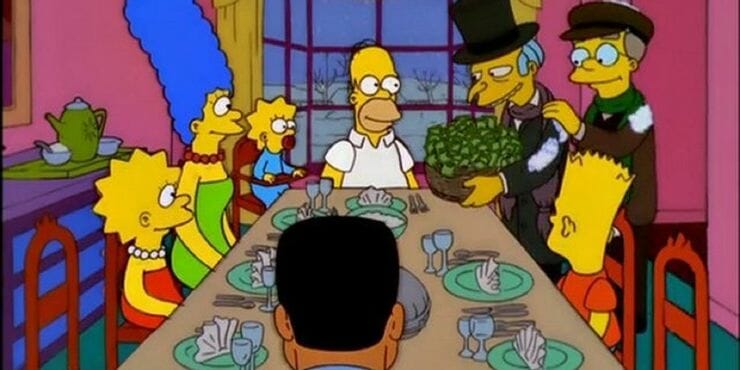 “Tim Robbins and Gary Coleman provide guest voices in a riotous episode spoofing the annual ‘must have’ Christmas toy. When construction costs owed to Fat Tony (Joe  Mantegna) bankrupt Springfield Elementary, a private company called the Child Development Group takes over. Its leader, Jim Hope (Robbins) promises a curriculum of ‘less ‘ick’ and more ‘yum”, but his real hope is to mine the kids’ minds for ideas to create the perfect toy. When Lisa realizes the truth, she and Bart sneak past a security guard (Coleman) and obtain a sample product, a doll that seems to do everything — and that includes destroying the other toys.” 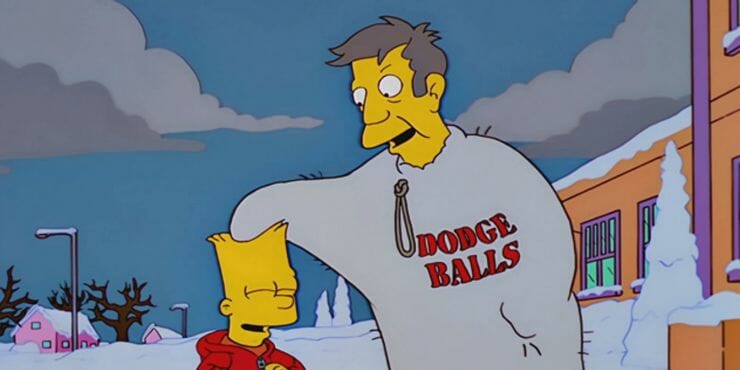 A blizzard traps Skinner and Groundskeeper Willie with an assortment of students at Springfield Elementary. 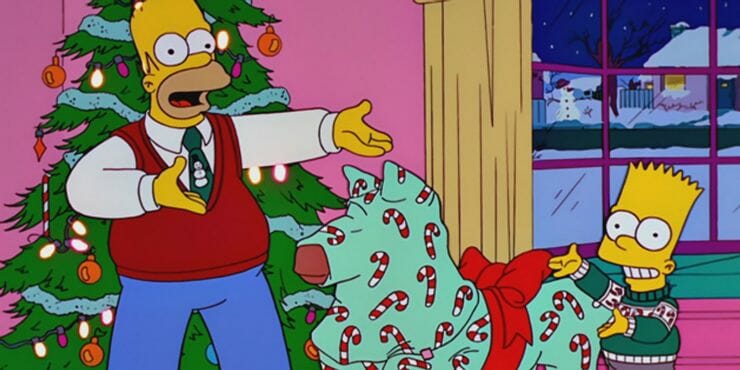 Richard Gere guest stars in a Christmas episode that spawns a crisis of religious conscience in Lisa. The trouble starts when congregants of the First Church of Springfield, faced with a sudden need for funds, turn for help to Mr. Burns (Harry Shearer), who turns the church
into a business (“The old church was skewing pious,” says his advisor).  Enter podium-placed advertising and in-sermon commercials; and exit an outraged Lisa. Her disenchantment leads her to the Springfield Buddhist Temple and to Gere, who introduces her to teachings she finds easy to embrace. All of which has Rev. Lovejoy (also Shearer) wondering what to do about “Marge Simpson’s devil daughter.” 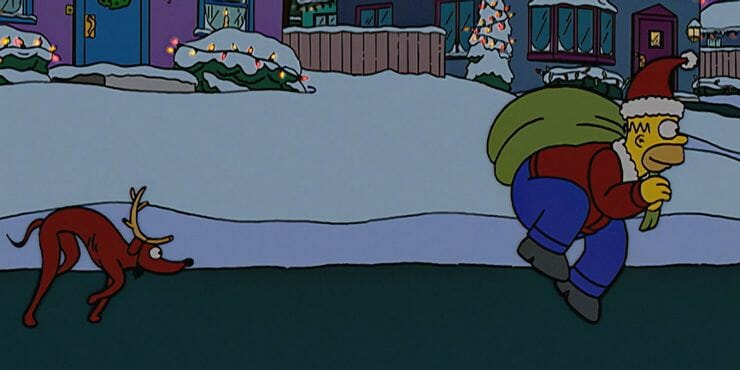 A version of “A Christmas Carol” causes Home to go become giving, prompting jealousy in Flanders. 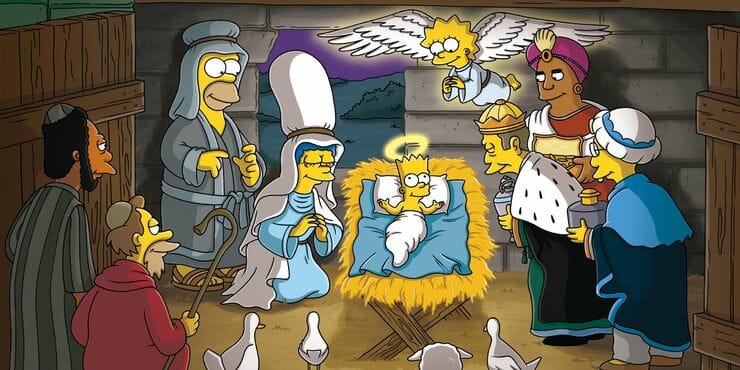 The Simpsons appear in 3 tales: the story of Jesus’ birth; a WWlll tale and a Christmas musical. 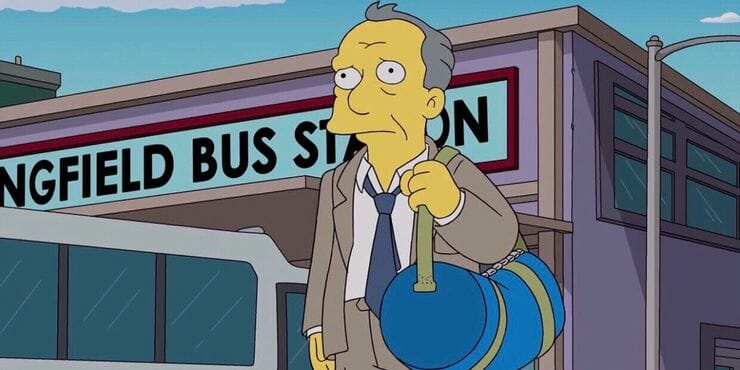 Gil moves in with the Simpsons and Marge decides she needs to tell him off, ruining his life. 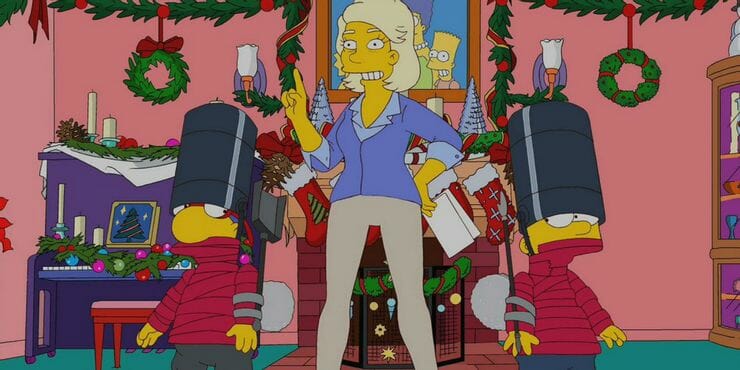 Season 22: Episode 8 – “The Fight Before Christmas”

An edgy Christmas with the Simpsons.  Katy Perry appears in a segment with puppets of the family. 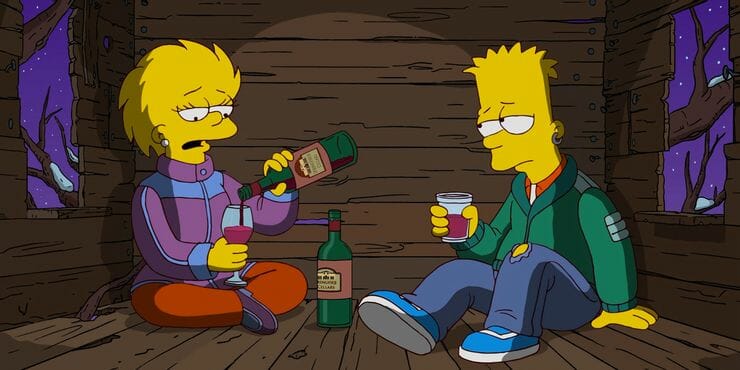 30 years in the future, Bart and Lisa discover the perils of parenthood in a post-apocalyptic world. 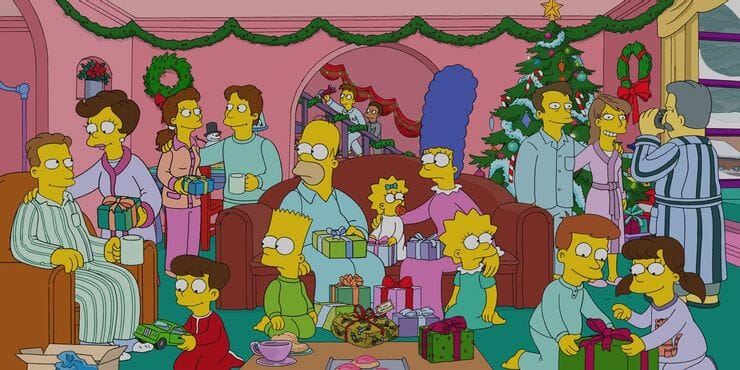 When Springfield is the only town with snow at Christmas, Marge turns the Simpson home into a B&B. 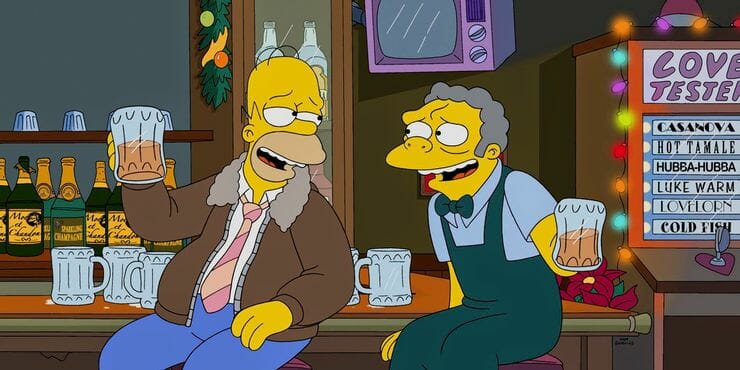 Homer leave his family alone for Christmas as he’s convinced his presence is a burden. 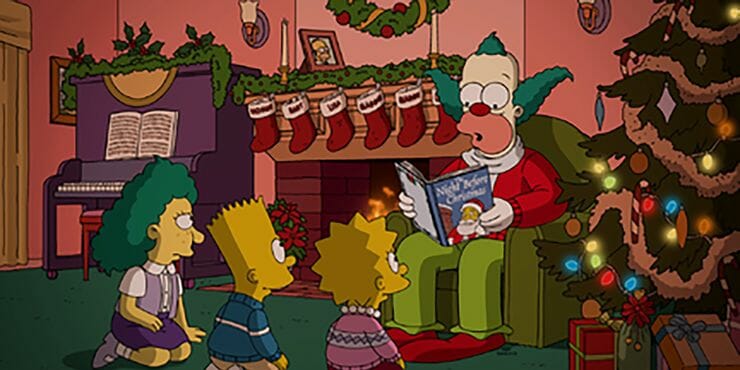 Season 28: Episode 10 – “The Nightmare After Krustmas”

Krusty and his daughter spend Christmas with the Simpsons. 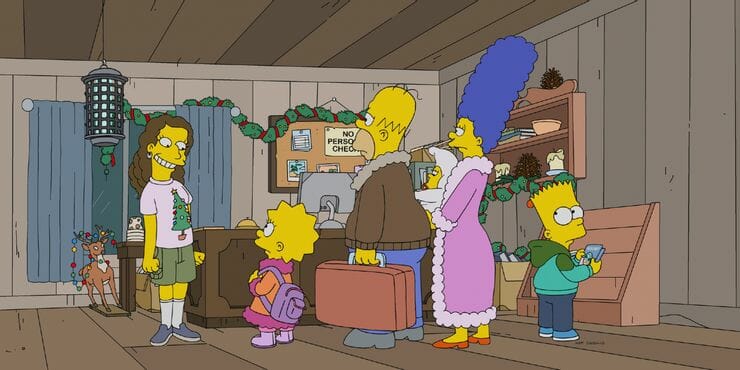 The Simpsons try to spend a relaxing Florida Christmas. 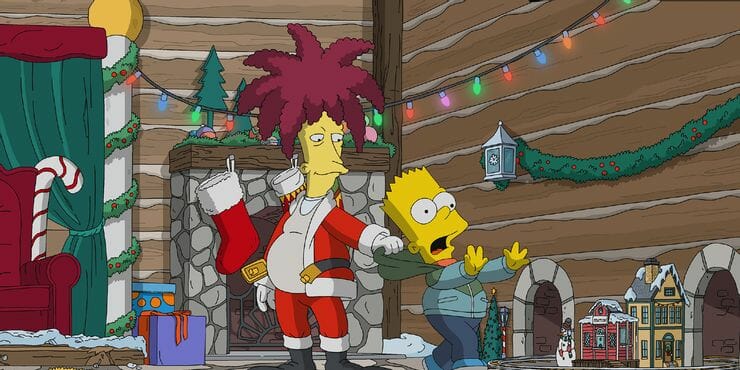 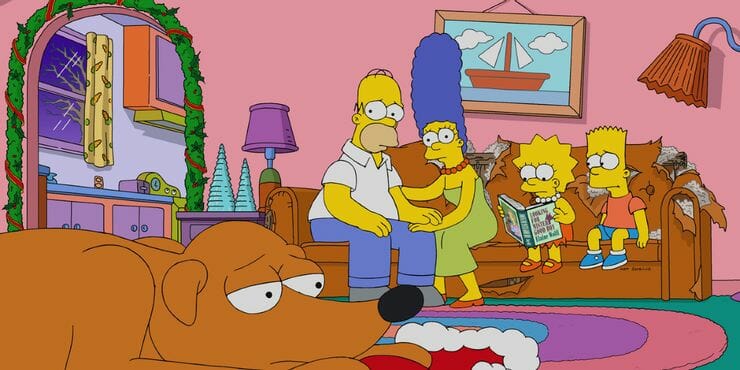 The Simpsons explore the tragic past of Santa’s Little Helper.