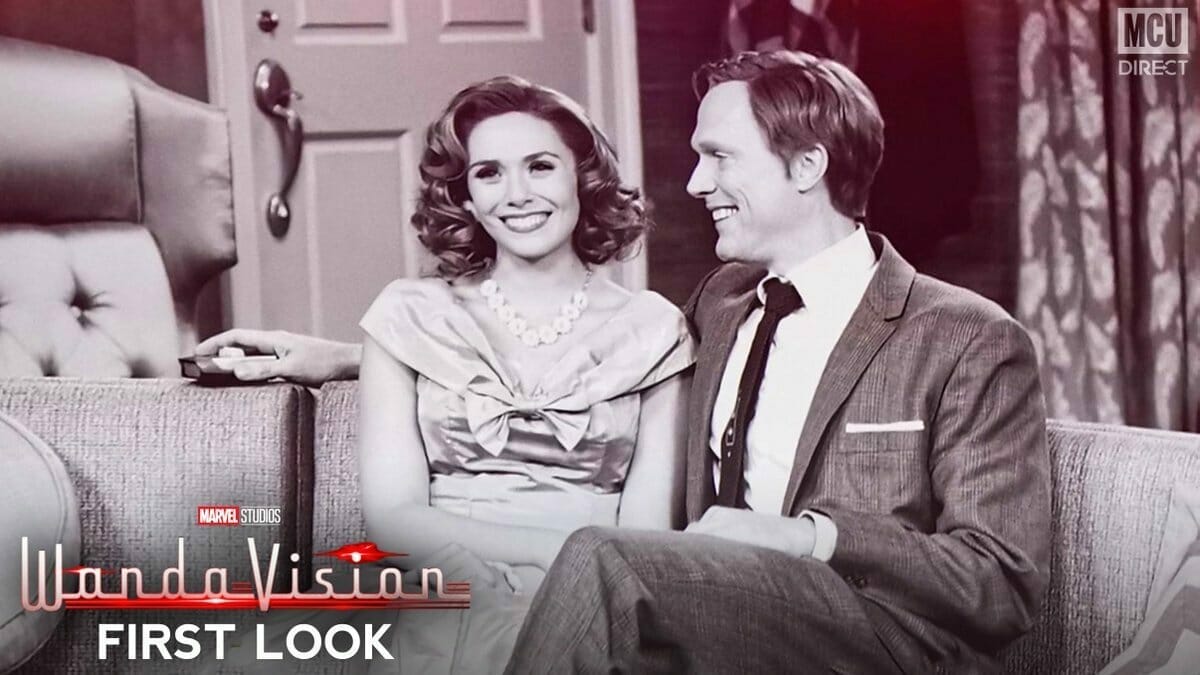 Fans got their first tangible glimpse of the new series WandaVision at CCXP in Brazil.

Set to come out in 2021, the still from the upcoming six-part miniseries shows Wanda Maximoff (played by Elizabeth Olsen), living a traditional life inside a nuclear family with love interest Vision (played by Paul Bettany).

Based on the photo, the show will be taking on a black-and-white, golden age of television vibe, not unlike such classics as Bewitched or I Love Lucy; however, it is heavily implied that things are not as rosy as they appear (though perhaps they will be substantially more…Scarlet?)

WandaVision is one of many original series slated for rollout on Disney+ in the coming months. Some of the other promising additions into Phase 4 include She-Hulk, Moon Knight, and Ms. Marvel, but the hype is particularly high for WandaVision for three main reasons:

Benedict Cumberbatch’s character is slated to have a sequel with Dr. Strange Into the Multiverse of Madness, which will tie in with the events that are to take place in WandaVision. Perhaps Strange’s journey will be the crux that holds Phase 4 together, not unlike how the Infinity Stones were the glue that held together all the movies from Phases 1-3 before culminating with the Infinity War trilogy.

Wanda Maximoff has a codename in the comic books: Scarlet Witch. Scarlet Witch is a character from X-Men, a franchise FOX stubbornly held onto along with The Fantastic Four (with middling results) until finally becoming absorbed into Disney in 2019. As a result, Wanda’s affiliation with the mutant superheroes has been intentionally and essentially downplayed, citing her powers as a by-product from prolonged exposure to the Mind Stone.

Now that X-Men is finally part of the MCU, Disney has the opportunity to formally introduce popular characters from the series. What better way to get the ball rolling than with one of the most powerful, influential X-Men that may have been flying under the radar the entire time?

A Whole New Vision for the MCU

With Phase 3 done and the Infinity War Saga complete, many fans were curious what the new direction, or story arc, would be for Phases 4 and beyond.

The concept of the multiverse was formerly introduced in Spider-Man’s 2019 film Far From Home, and that will likely be the impetus that drives many of the movies during the current phase.

With the multiverse as a viable setpiece, that gives Disney free rein to come up with innovative, experimental, subversive storylines that wouldn’t have been possible in the initial Marvel phases.

X-Men’s Scarlet Witch has always been a favourite of mine, and I think she has the coolest powers of all the characters in the MCU. Combine that with the sensibilities of another nostalgic favourite of mine, I Love Lucy, and it seems like an unlikely but AWESOME match made in heaven.

If the new series is as promising as it looks, perhaps that will assuage fans of the other Olsen brood to lay off their campaign for To Grandmother’s House We Go and other movies from the Mary-Kate and Ashley empire. At least for a little while longer….