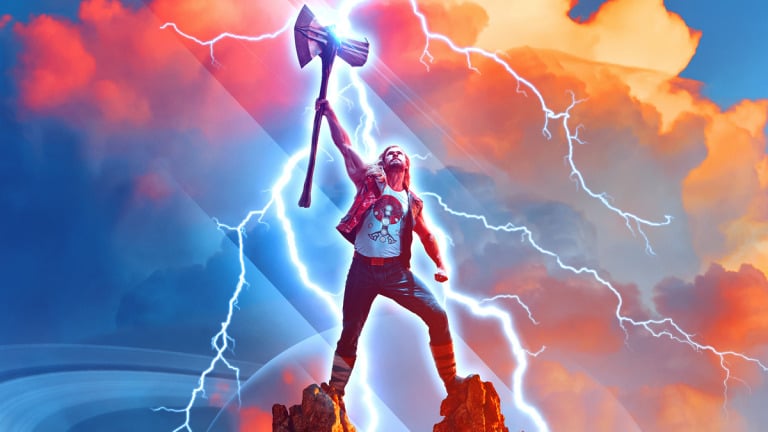 Marvel Studios’ “Thor: Love and Thunder” hits US theaters on July 8, 2022.  The film had its world premiere last night at the El Capitan Theatre in Los Angeles and social media reactions are beginning to drop online.

Most initial reviews are overwhelmingly positive with some saying the film has a great story, stellar cast, over-the-top funny, and Christian Bale’s Gorr is one of the creepiest villains ever.

#ThorLoveAndThunder is a vivid and vibrant blast that delivers. Hemsworth’s Thor remains a jewel in Marvel’s crown. Bale’s Gorr is a killer boogeyman blending the campy and the creepy. Portman’s Foster and Thompson’s Valkyrie are a top notch pairing. Crowe’s Zeus is *chef’s kiss* pic.twitter.com/PDb5SZRWOo

Christian Bale is phenomenally menacing as #ThorLoveandThunder’s villain, Gorr the God Butcher. One of the creepiest Marvel villains we’ve ever seen on screen. Gave me some Dark Knight Ledger Joker vibes at one point. pic.twitter.com/zsg9SNXfqY

Another classic Thor adventure! #ThorLoveAndThunder is everything I wanted it to be. Big, colorful, weird Guns N’ Roses-fueled battles to go w/ a hopelessly romantic story about discovering love in unexpected places. Christian Bale & Russell Crowe are especially great. And Korg! pic.twitter.com/fu0gTUuMRj

#ThorLoveAndThunder is the funniest film in the MCU. The jokes are excellent as is the cast delivering them.

BUT, the plot felt flat and stakeless. Not sure if that’s a #Thor problem or an MCU-without-a-big-bad problem. pic.twitter.com/G6XP9EyL0Y

THOR: LOVE AND THUNDER is a rockin’ great time with electrifying action, lots of laughs (the screaming goats!) & a profound story on absent gods & our desire for love. Natalie Portman makes a mighty return & Christian Bale slays it as the terrifying Gorr. The best Thor film yet! pic.twitter.com/s42SkqxlJj

THOR: LOVE AND THUNDER is the greatest MCU movie, or, for that matter, any movie ever made because it has a direct reference to COCKTAIL (that part not a joke) and in my own pantheon of references, those are the rules I set long ago so I must abide by them

#ThorLoveAndThunder is predictably hilarious yet unexpectedly personal and heartfelt. Christian Bale and Natalie Portman’s performances truly shine while Waititi delivers an emotional story. I think this may be my favorite Thor movie. pic.twitter.com/i7BpmQHvQ1

#ThorLoveAndThunder gets better when it’s not trying to desperately recapture the magic of Ragnarok. Most of the humor doesn’t land as well as it did the first time, but Chris Hemsworth, Natalie Portman, & Christian Bale do the best with it.

#ThorLoveAndThunder is the GREATEST movie Marvel has made so far! I’m not joking. I haven’t laughed that hard since Ragnarok and I feel invested in Marvel again in a way that I haven’t since Endgame. Also, bring tissues. The journey is *chefs kiss* from start to finish!❤️ pic.twitter.com/bJYVxCJoQS

THOR: LOVE & THUNDER is a TOTAL BLAST! Even BETTER than “RAGNAROK,” and one of the BEST MCU MOVIES! #ChrisHemsworth is a friggin’ ROCK STAR & #NataliePortman is a TOTAL BADASS! Director #TaikaWaititi has done it again! #ThorLoveAndThunder IS AWESOME! pic.twitter.com/JTEl6xB2xt