Skip to content
Home » Blog » Here’s All The Details We Noticed In Episode Two of Ms. Marvel 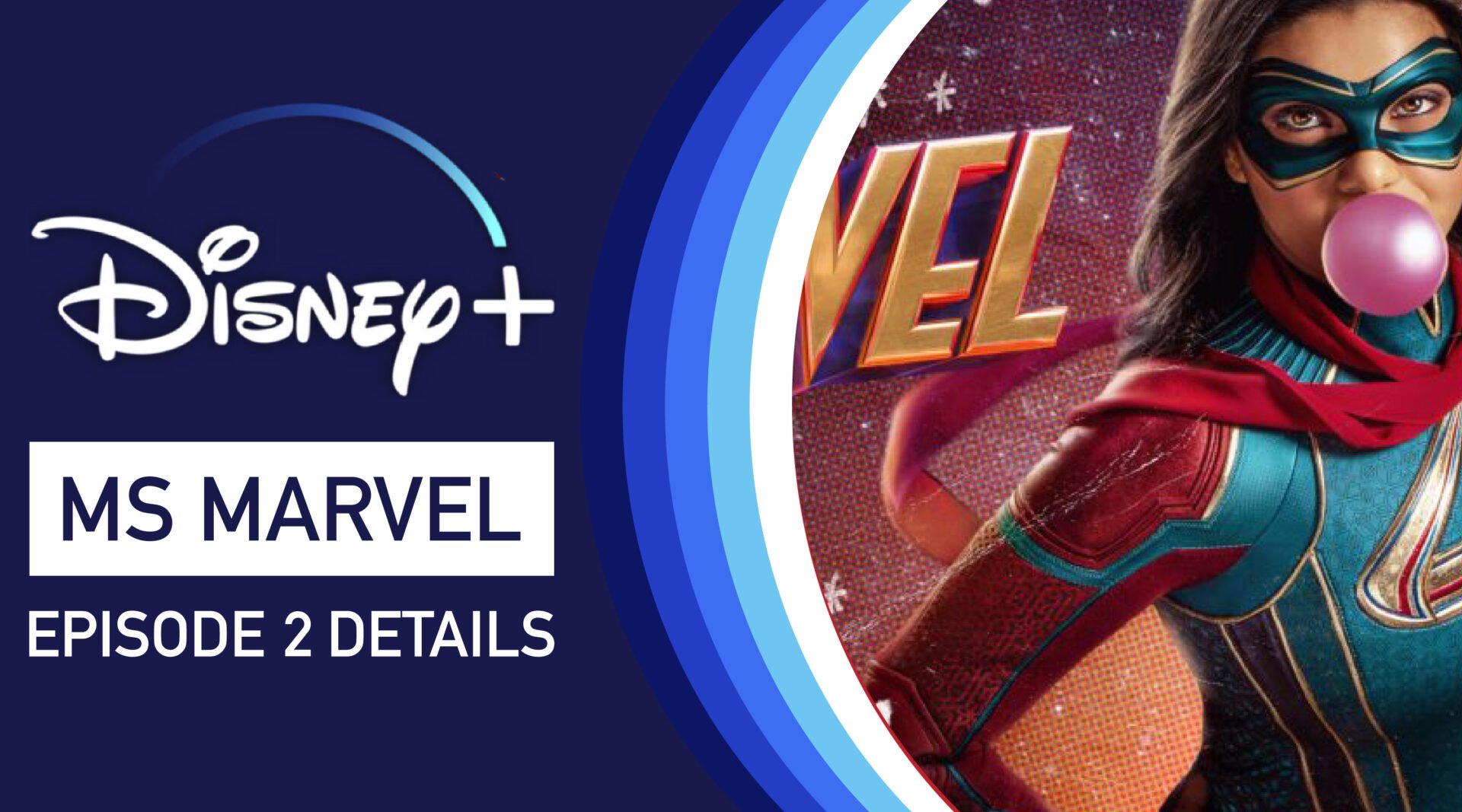 Welcome back to another episode of breaking down the latest episode of Marvel on Disney+. If you’re new here, welcome; we’ve done this for every series, including WandaVision, Falcon and The Winter Soldier, Loki, What If, Hawkeye and Moon Knight. If you’re returning, thank you, it’s good to have you back.

Before we begin, there are spoilers for episode two of Ms Marvel; if you’ve not yet watched the episode, bookmark this post and return to it once you have.

Young forever
When Kamala explains to Bruno that she might have powers like Ant-man, she says that she and Ant-Man both look younger than their years, which is a nod to the fact that Paul Rudd doesn’t seem to age.

QR code
Like Moon Knight, Ms Marvel has QR codes hidden during episodes that take you to a free Kamala Khan / Ms Marvel comic. This week is on a poster as Kamala and Bruno walk through the school. 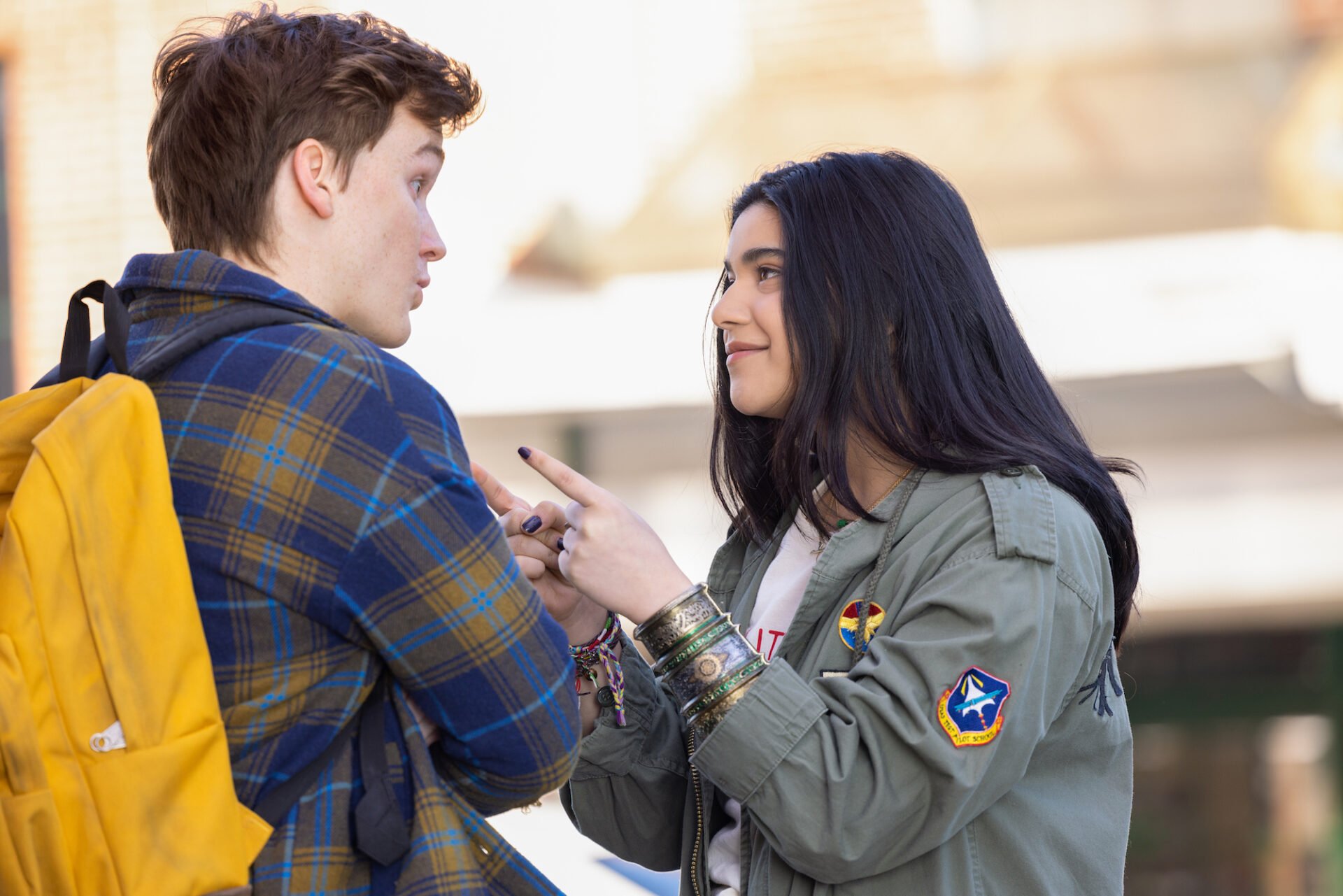 During Kamala’s training montage, Bruno explains that her powers seem to be genetic and are coming from within her. This is similar to the Ms. Marvel comics, where Kamala has an Inhuman gene activated after she is exposed to Terrigen Mist. 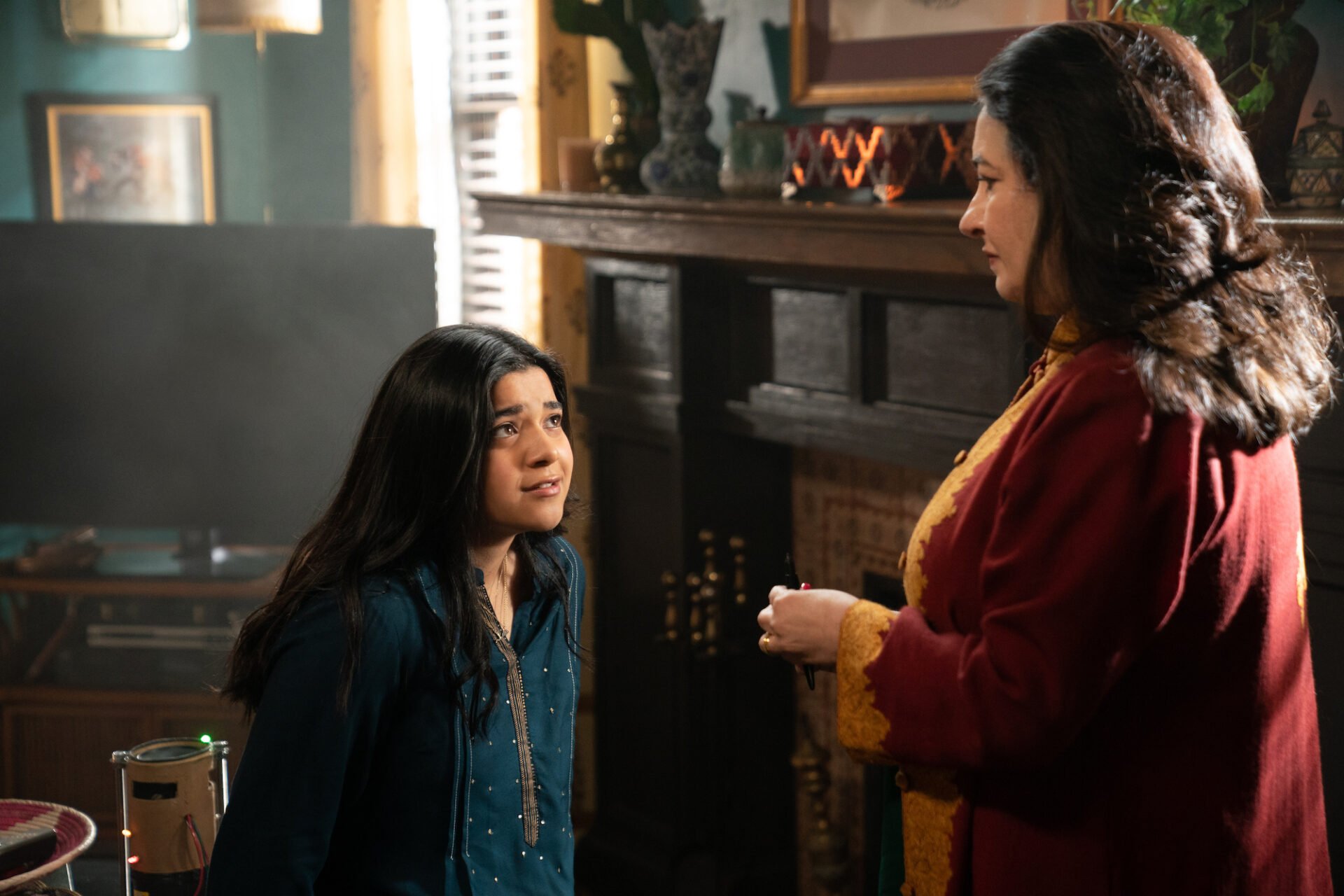 Let me go
While practising her powers on the roof, Kamala falls off a ledge and begs Bruno to let her go. It’s a scene mirrored from the one in Avengers: Endgame where Nat begs Clint to let her go from the cliff on Vormir.

Kamran
Kamran’s entrance at the party is similar to his first appearance in Ms Marvel #3. In the comics, his family is very close to Kamala’s until he moves to Texas, only to return when he’s older. He also has powers in the comics, which come from exposure to Terrigen Mist. 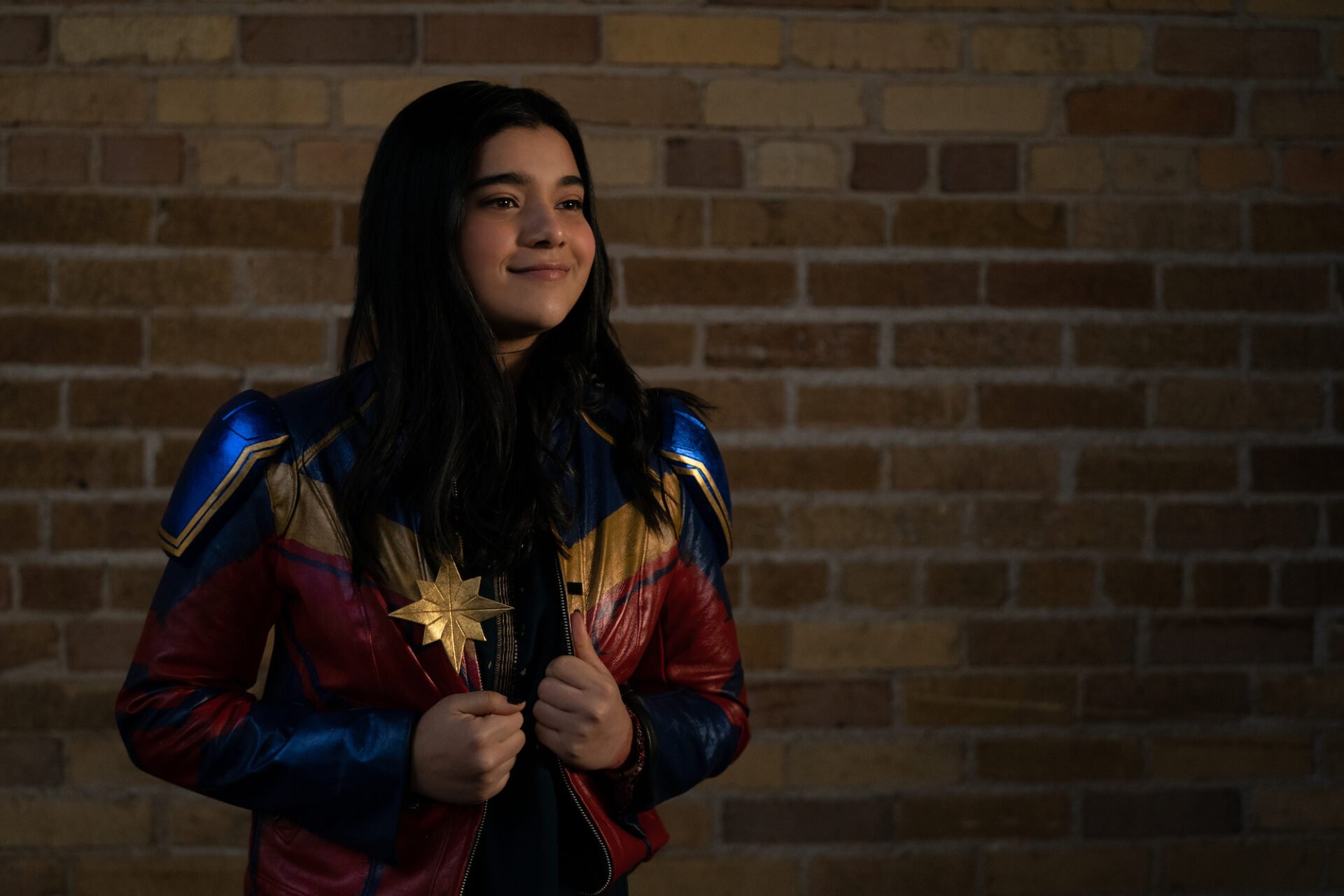 Be My Baby
Kamala dancing to Be My Baby by the Ronnettes is a delightful moment and subtle nod to Dirty Dancing. The song is used in the film’s opening credits during Baby’s internal monologue. Dirty Dancing is a very socially driven movie that explores the idea of a young woman who feels caught between doing the right thing and her family’s expectations. It is also very focused on identity and becoming independent from one’s family.

Grease
Kamala and Bruno hiding behind the menus are a cute moment taken straight from Grease, where Danny and Sandy do the same thing. 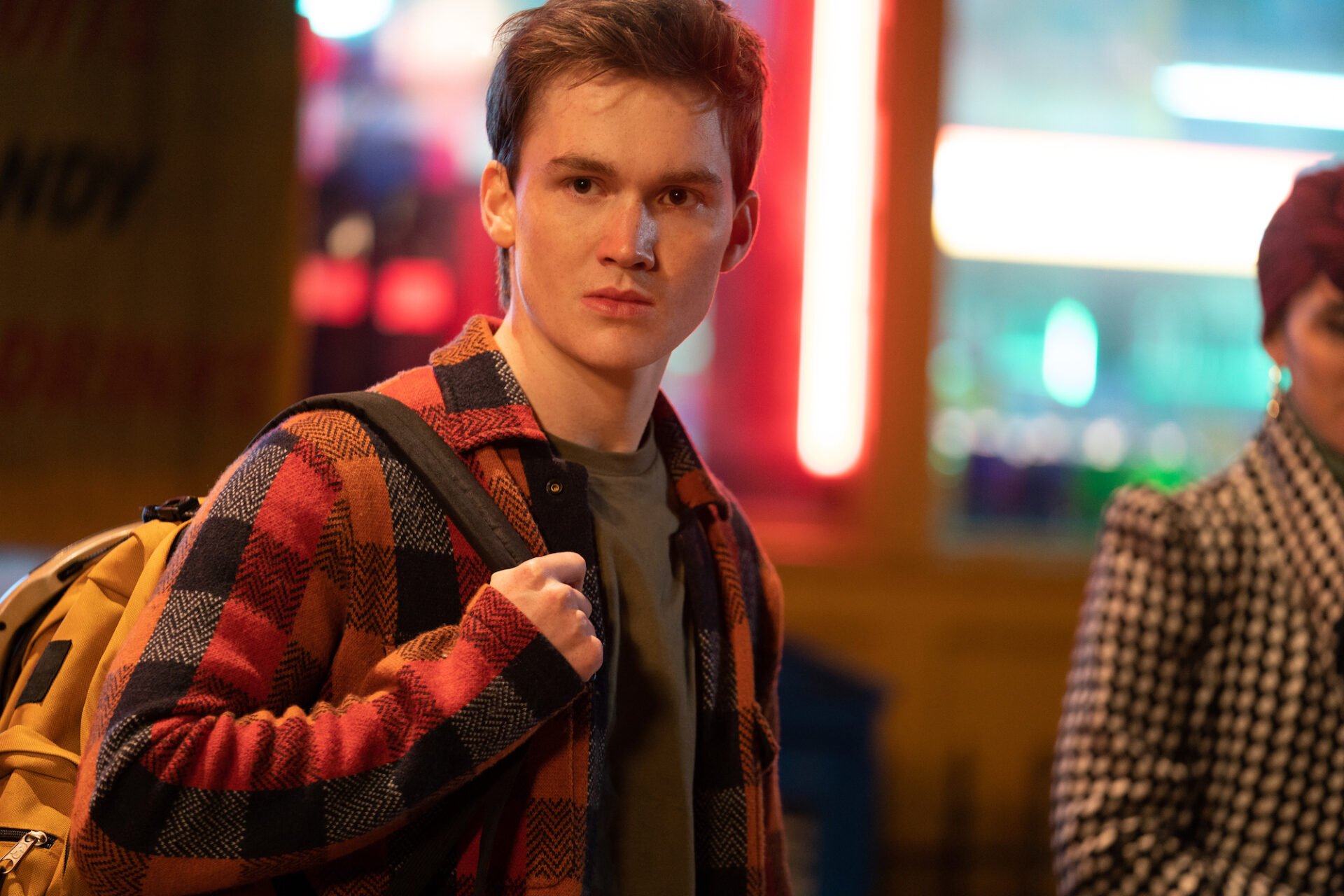 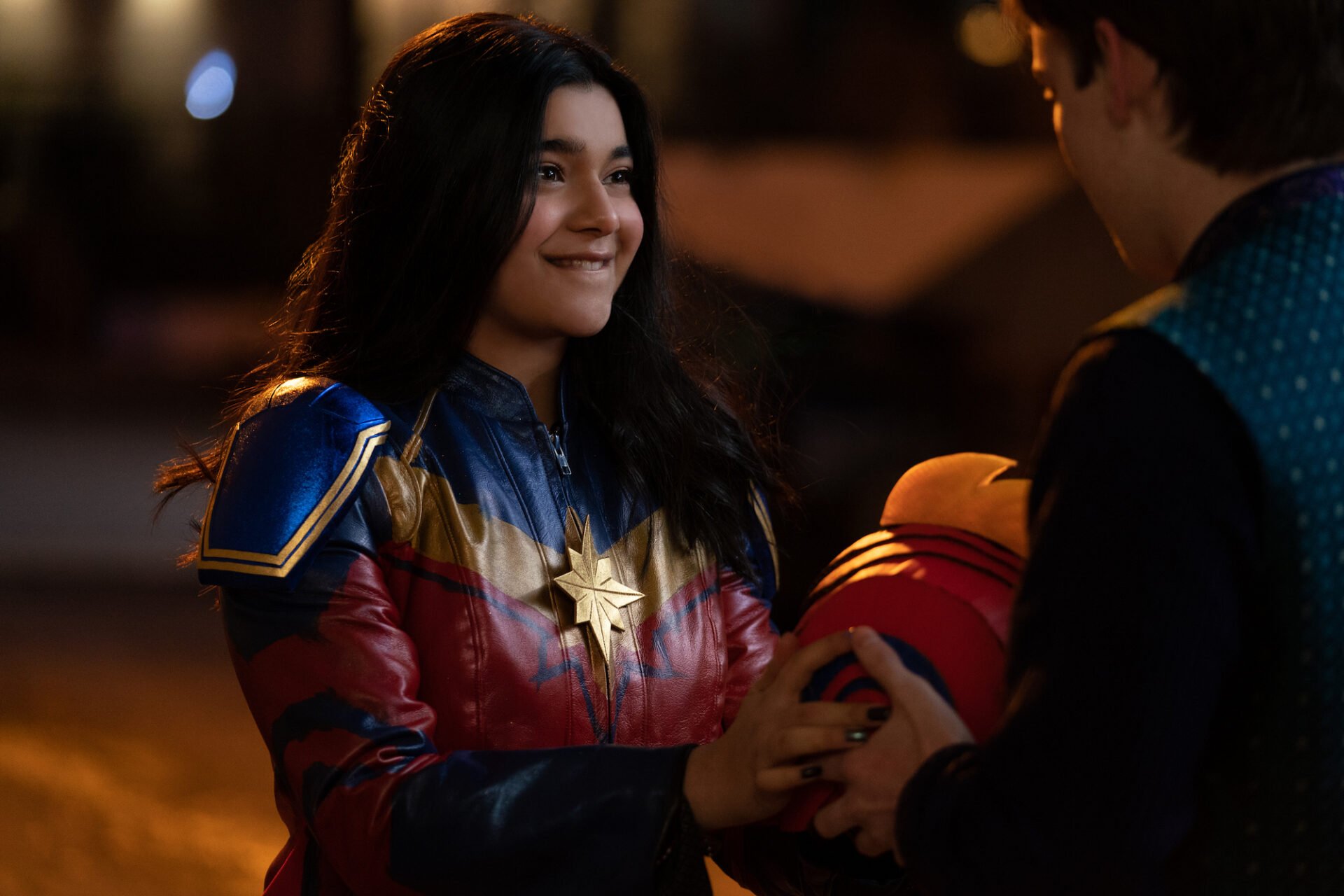 Jedi
When Mr Wilson tells Bruno that he’s been accepted into CalTech, he tells him he’s going to be a Jedi, a reference to the moment in Star Wars: Episode I when Obi-Wan Kenobi tells Anakin the same thing. Let’s hope that Bruno turns out better than Anikin! Mr Wilson then references Miranda Priestly from The Devil Wears Prada when persuading him to accept his place at CalTech. 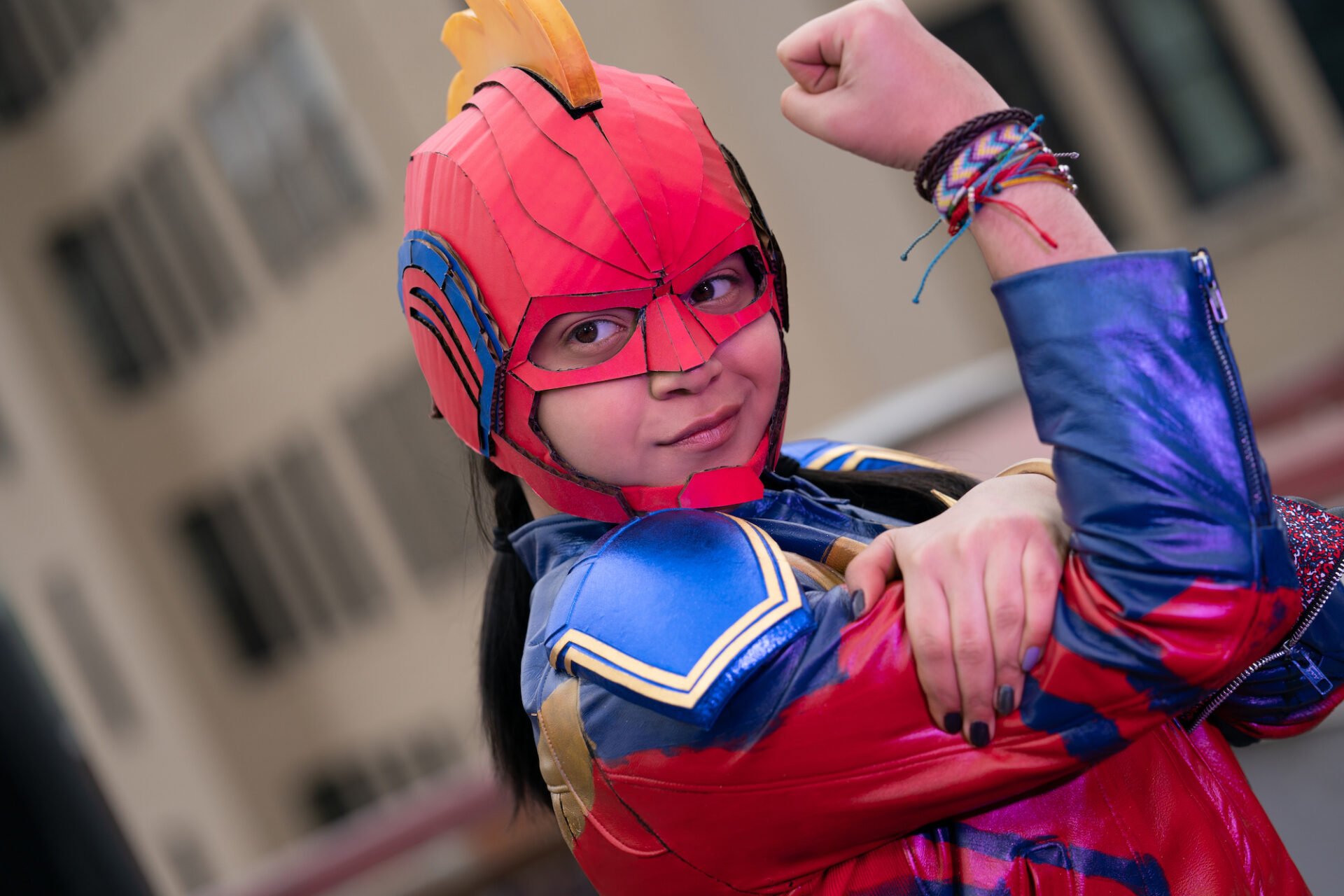 Kingo
Kamala and Kamran talking about Bollywood films is a perfect cultural moment. Still, they mention Kingo, the Eternal, who also leads a life as a Bollywood star, which is a great way to tie Ms. Marvel to the MCU. Kamran mentions that his Mom has a crush on Kingo Senior. In Eternals, Kingo explains that he’s been explaining that he doesn’t age by saying he is part of a great acting dynasty and not the same person. 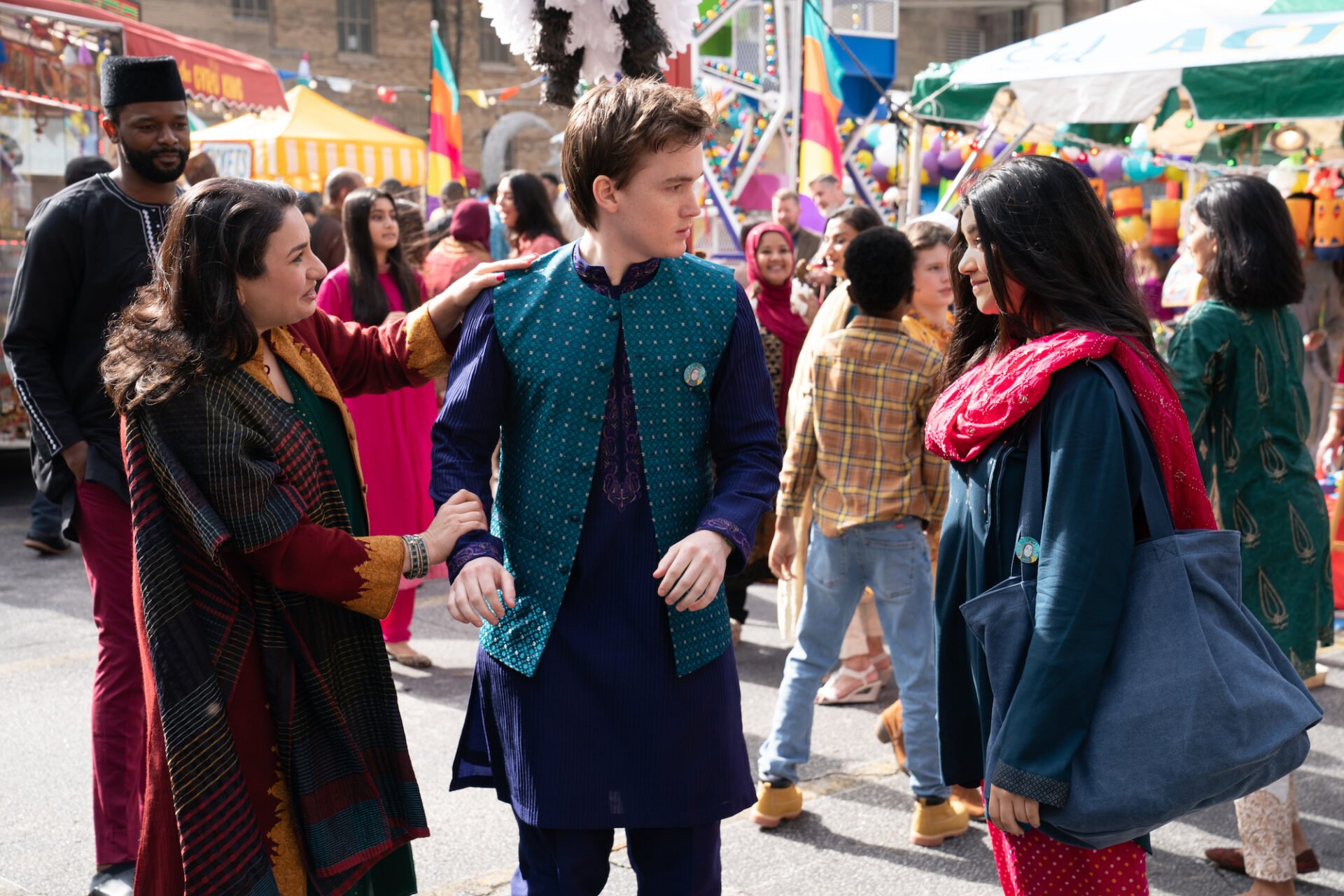 The superhero pose
After Kamala saves the little boy from falling, she lands in the ‘superhero pose’ made famous by Natasha Romanoff, first seen in Ironman 2 and then referenced by Yelena in Balck Widow. 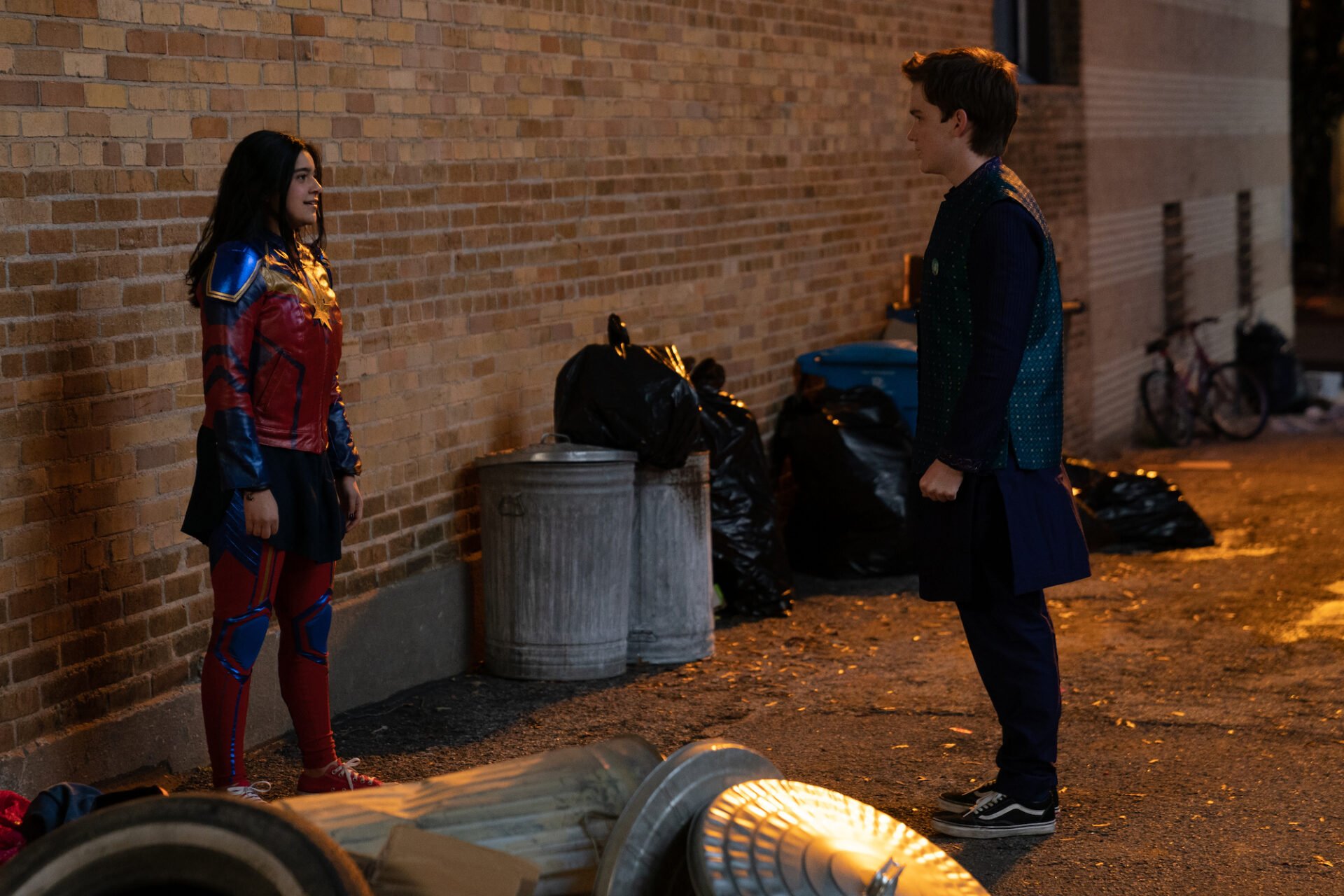 Circle Q
In Episode 2, we’re first introduced to Bruno’s Circle Q convenience store; this is taken directly from the comics and is used as a place to hang out away from her family by Kamala, where Bruno works. 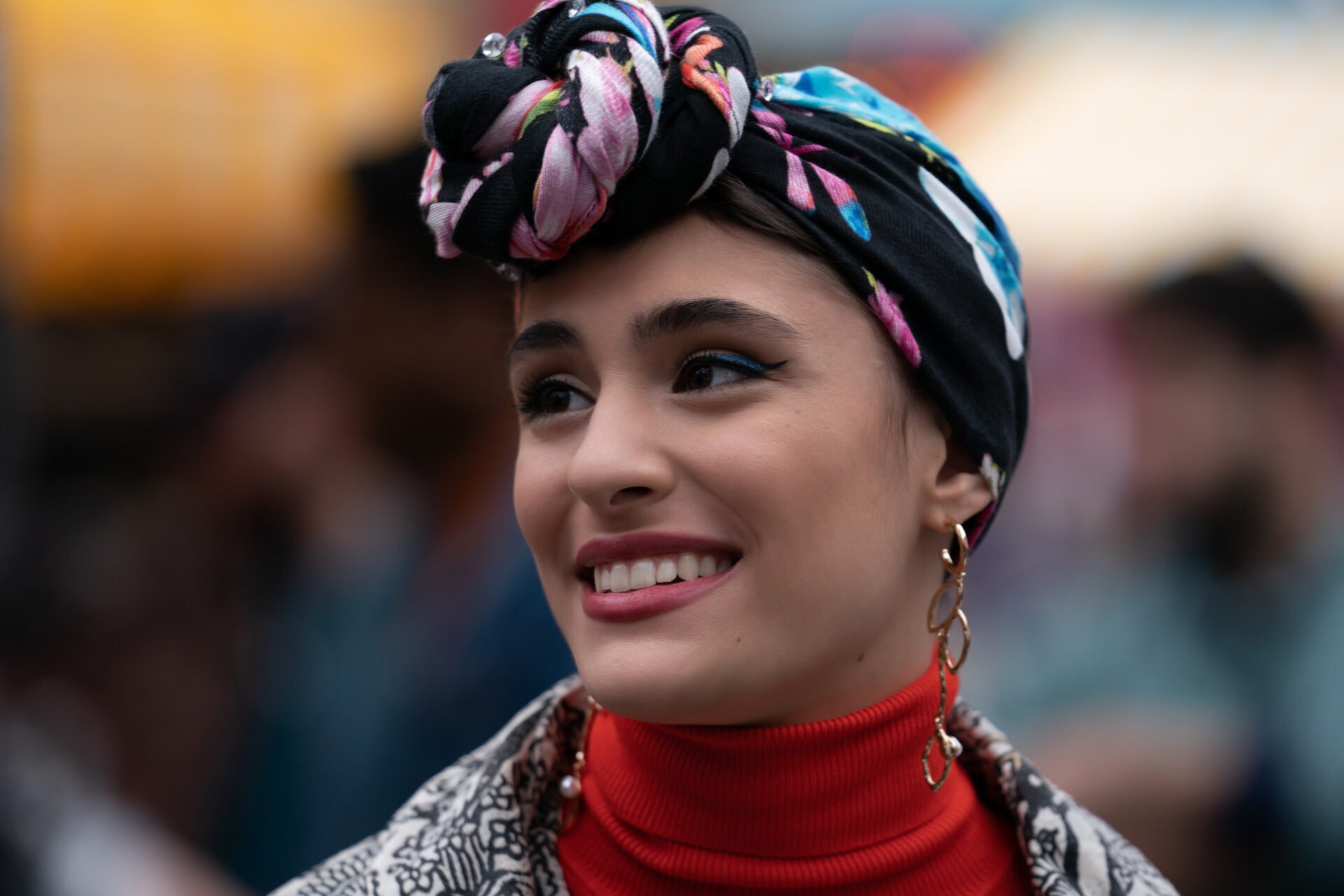 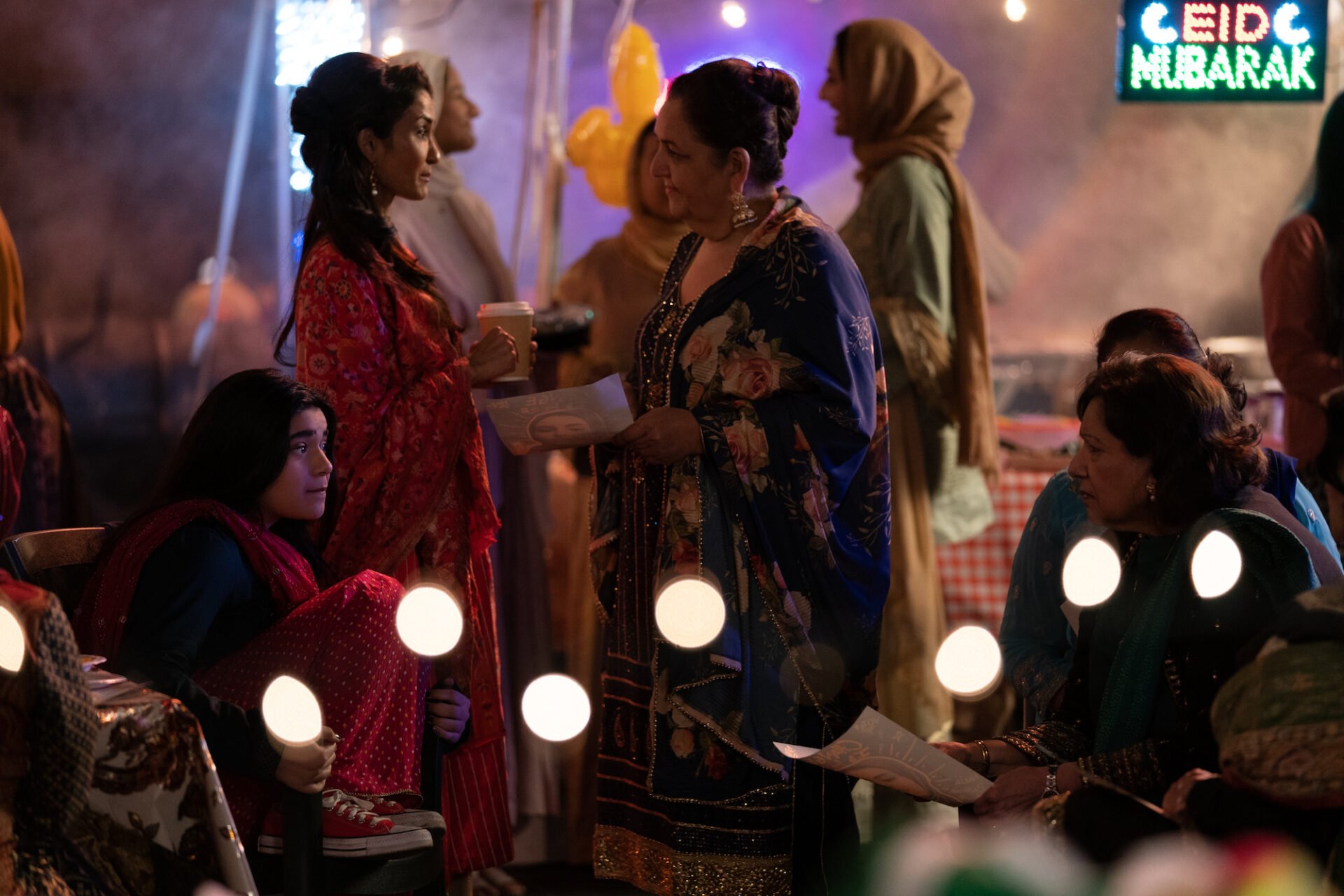 Mural
The mural seen during the training montage is by an artist called Brandon ‘BMIKE’ Odum. He’s a Black artist and activist who creates bold work that crosses over art and resistance.

Trust a Bro
A ‘Trust a Bro’ moving truck from Hawkeye can be seen in the closing credits, another detail that reminds us we’re in the MCU. 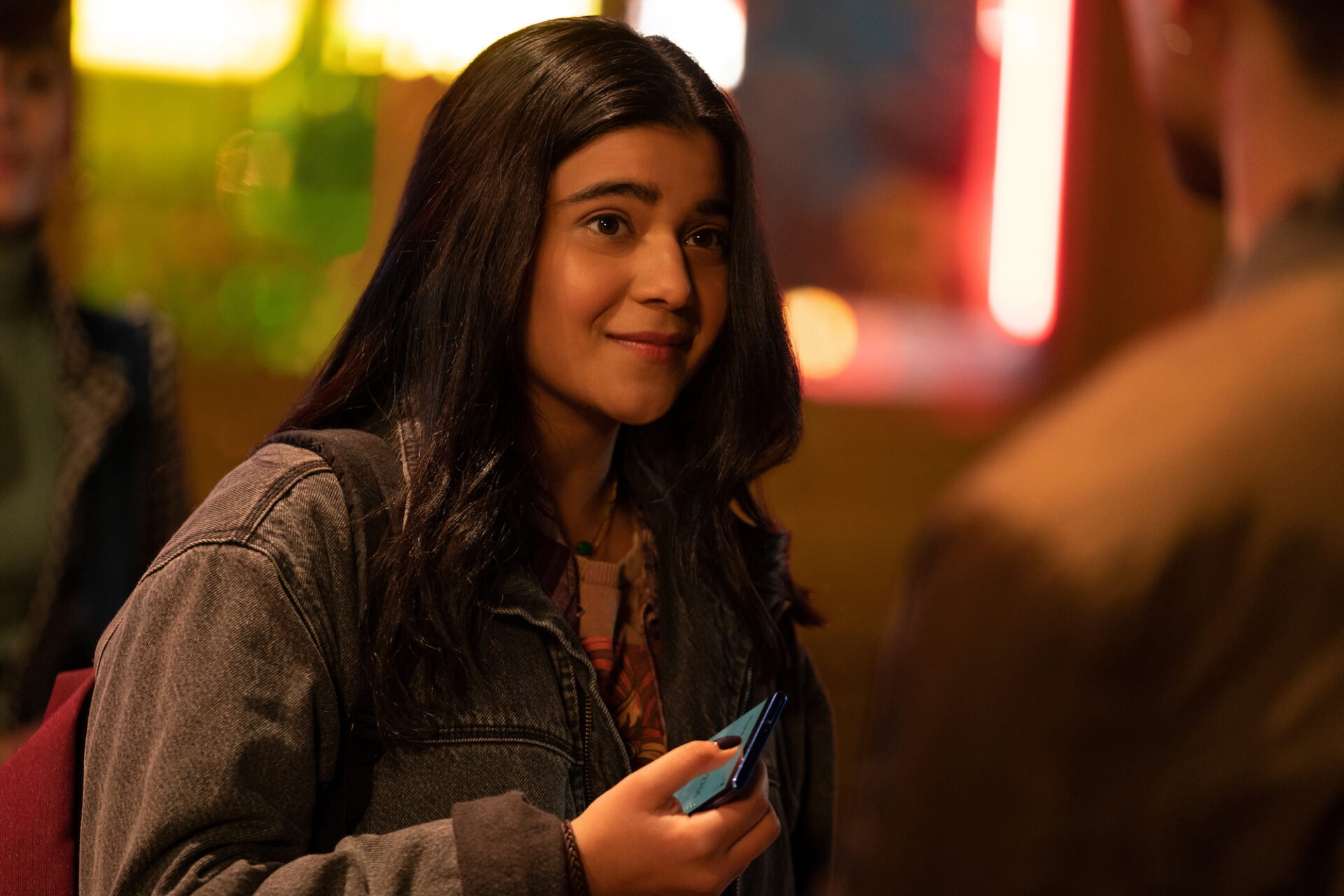 Haram dot Kamran is quite a cute, funny big-brother joke. Haram in Arabic means fobidden, and references anything that is against the rules of Islam.

When Kamala and Nakia are late to Masjid, they’re trying to do their Wudhu (ablutions) fast. Muslims must present themselves freshly clean to God. Masjid is the Arabic word for mosque, and Urdu uses the same word.

Did you notice anything else in Ms Marvel that we missed? Let me know on Twitter – @MattJ_Movies