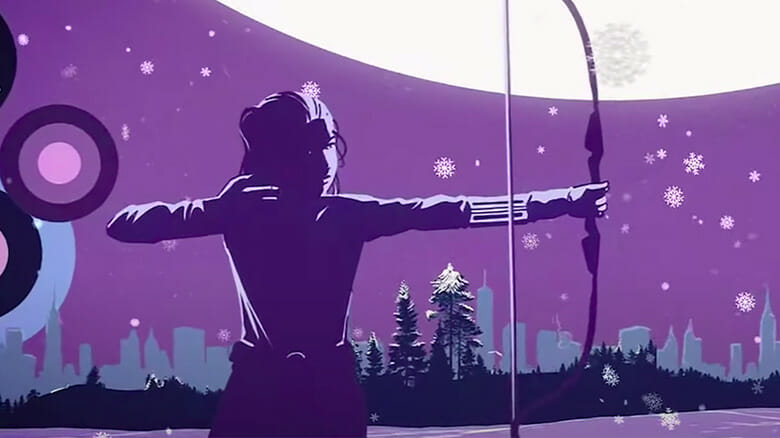 Welcome back to another series of Marvel-related posts where we break down all of the details and comics references we spotted this week. So here is everything we noticed in the first two episodes of Hawkeye.

As always, this post contains spoilers for Hawkeye and the wider MCU. If you’ve not yet watched episodes 1 & 2, bookmark this post and return to it once you have.

The Battle of New York 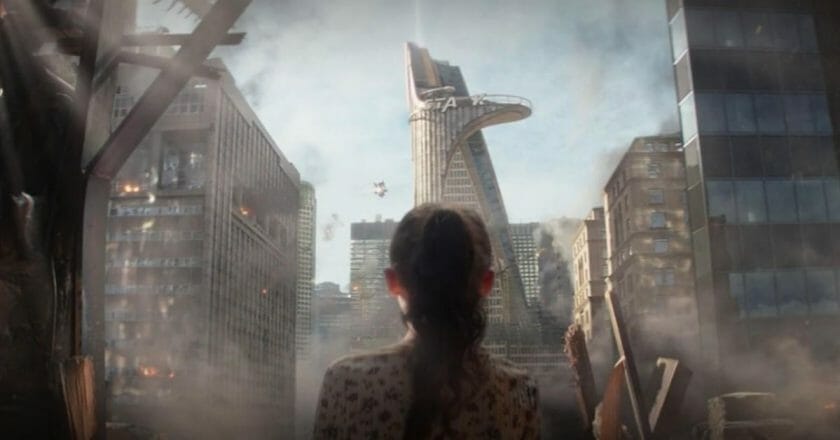 Seeing the Battle of New York from young Kate’s perspective was an epic way to start the series. We get to see Stark Tower, with the R already destroyed. When Kate sees Hawkeye on top of the building for the first time, we’ve seen this sequence before. The shot of him falling and shooting the arrow is reused footage from Avengers, but it’s not the only time Clint has done this. Hawkeye Issue #1 by Matt Fraction and David Aja features the very same shot. 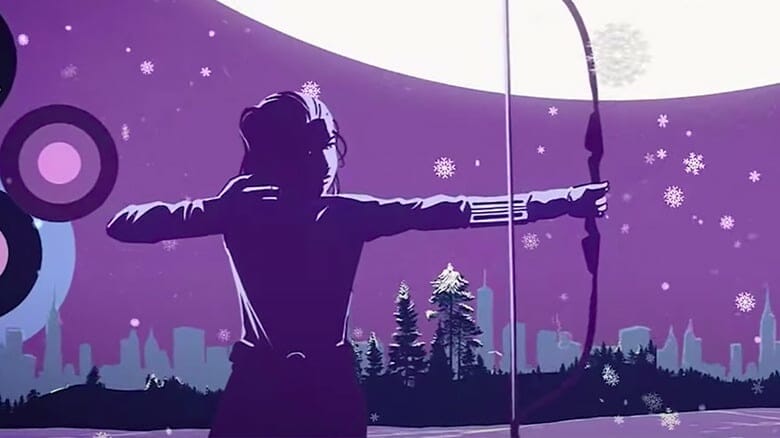 Both sets of credits sequences are nods to the comic series by Matt Fraction and David Aja, which the series is heavily based on. The key-art for the whole series so far has looked like it was taken straight from the books. 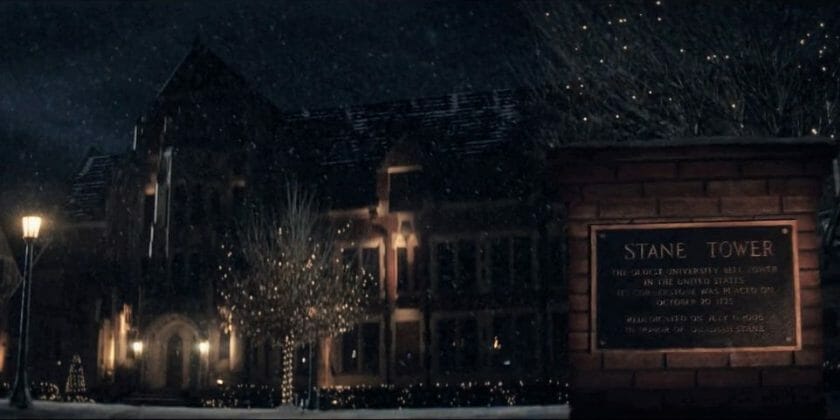 The bell tower that Kate destroys at the beginning of episode 1 is named “Stane Tower”, a nod to Obadiah Stane, the villain in the first Ironman movie. The plaque we see reads:

“The oldest university bell tower in the United States. Its cornerstone was placed on October 20, 1725. Rededicated on July 1st, 2006 in honour of Obadiah Stane.” 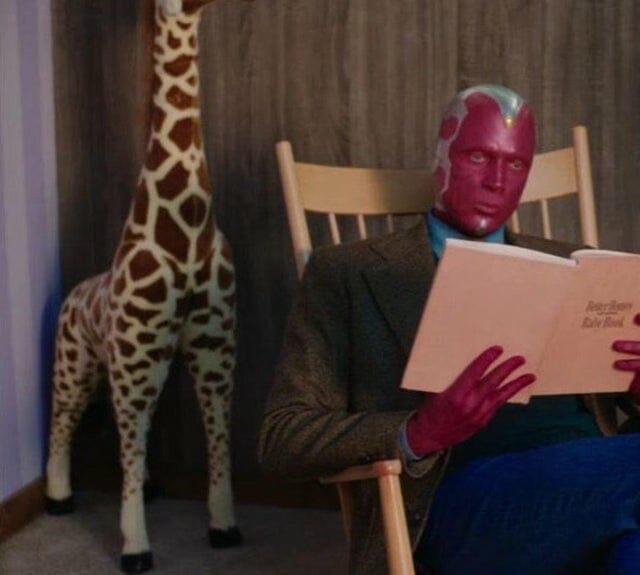 In a scene at the beginning, when we see young Kate’s bedroom, a stuffed giraffe can be seen in the background. It’s the same one that appears in Antman and the Wasp in young Hope’s room and in the twin’s nursery in WandaVision. A possible Young Avengers connection or just coincidence? Or is it Eternal’s Dane Whitman finally getting his wish? 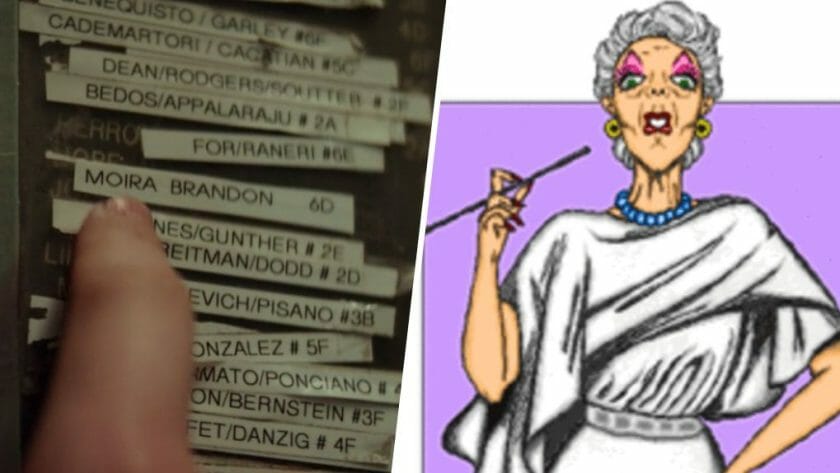 Kate takes Clint to an apartment owned by her Aunt – Moira Brandon, an actress, as seen in the movie posters hanging on the wall. In the comics, Moira is an actress who is made an honorary member of the West Coast Avengers after allowing them to use her home as their headquarters. This is another big hint that we might be seeing the West Coast Avengers in the MCU, given that Kate Bishop and Clint were both prominent members.

During the recreation of The Battle of New York in Rogers The Musical, we see a cut-out of Loki riding a Chitauri craft in the same way he does in Avengers. 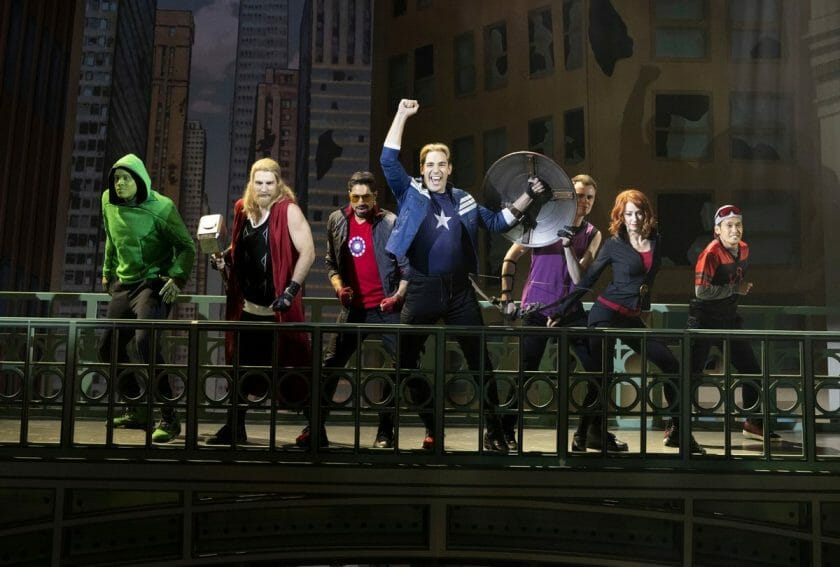 While watching Rogers, the musical, Clint complains that Antman wasn’t even there. Technically, Antman was there, though, after he travelled back in time during the events of Avengers Endgame. 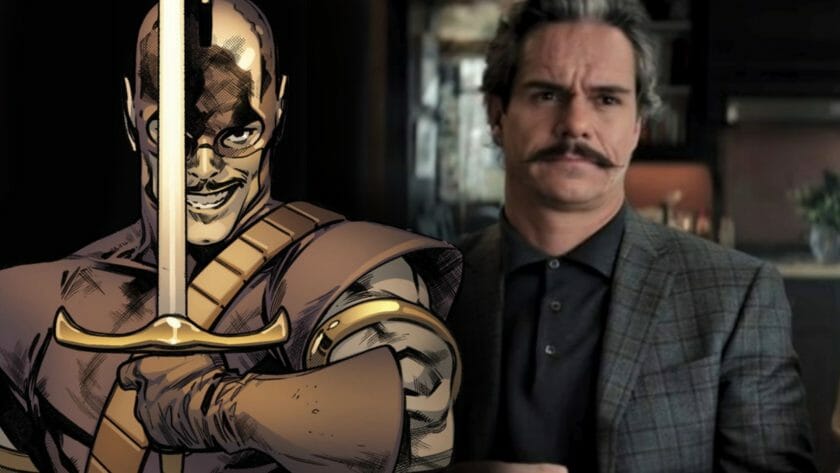 Kate’s soon-to-be Stepdad, Jack, is more sinister than even she realises; he also has an unhealthy obsession with swords, even trying to buy and eventually stealing the Ronin sword. This is a nod to his comic book origins; Jack, AKA Swordsman, is a villain from Clint’s past. Before setting off on a path to villainy, Jack is a circus performer who, along with Trickshot, trains a young Clint Barton. 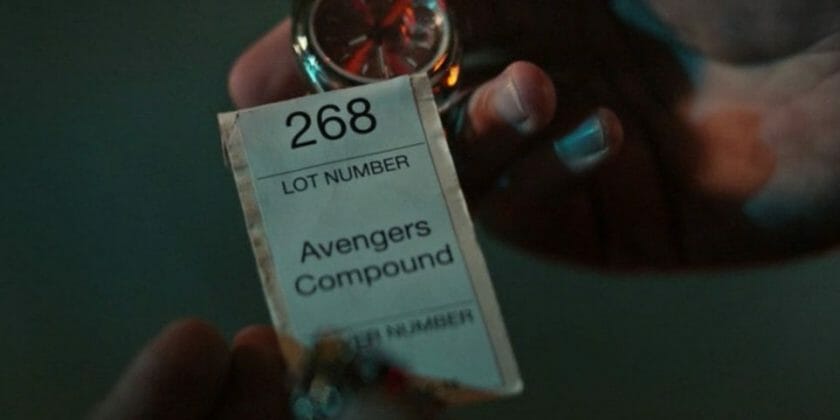 Significance is placed on the watch, which was recovered from the Avengers compound, but so far, it is unclear who it belonged to or what makes it so desirable. It’s more than likely the watch belonged to Tony Stark. The wealthiest of the Avengers and the one responsible for all of the tech it’s possible the watch has more than just time keeping capabilities, it could be the one Stark uses in Civil War that turns into an Ironman Gauntlet. Actor Robert Downey-Junior is also known for his love of watches, so its also possible that it could just be a nice nod to him, since Jeremy Renner has said that RDJ was his mentor in the MCU.

The lot number assigned to the watch is “268” there isn’t any direct reference to Hawkeye in the number, but Avengers issue #268 features Kang in his time palce, very similar to what we saw in Loki’s season finale. 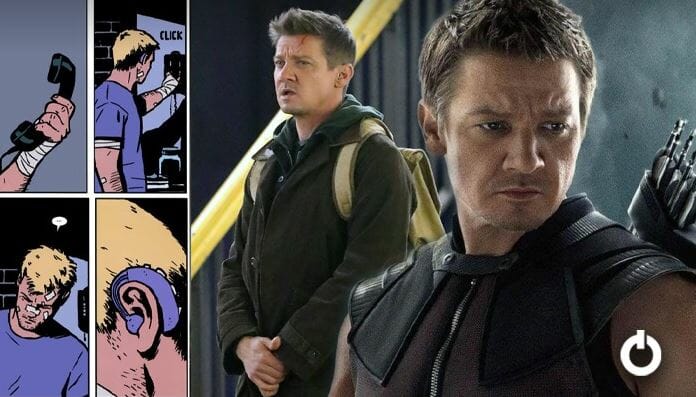 The series finally acknowledges Clint’s hearing loss, taken directly from the comics, although it’s not explicitly revealed which event made Clint lose his hearing. In Hawkeye #4, Clint loses his hearing fighting Crossfire and wears a hearing aid until Franklin Richards restores his hearing. In the iconic comic series by Matt Fraction and David Aja, it’s revealed that Clint lost his hearing as a child due to abuse.

Kate’s username for the Bishop Security app features the number 112012. This is another reference to Matt Fraction and David Aja’s comic, released in 2012. Issue 11 of that series is told entirely from the perspective of Pizza Dog. As weird as that sounds, it is one of the most well-written comics, so I hope there is at least part of the series told through this perspective. 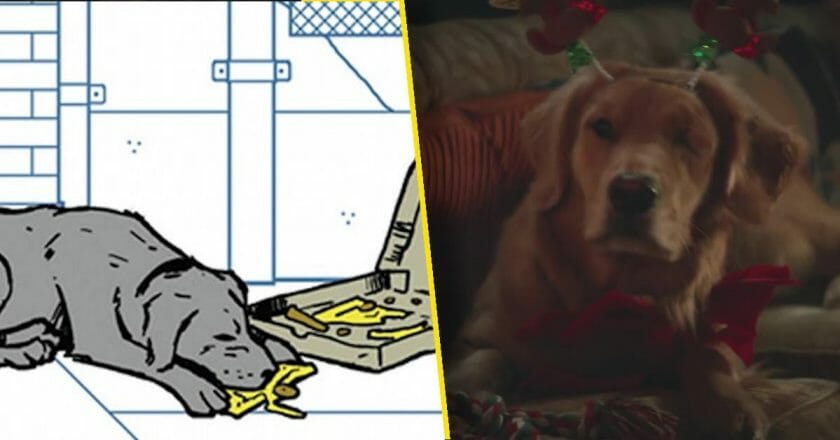 The first time we meet Lucky the Pizza Dog, he helps Kate escape the Tracksuit Mafia. In the Hawkeye comics, he helps Clint helps, but Kate feeding him a slice of pizza is a perfect nod to the same comic. 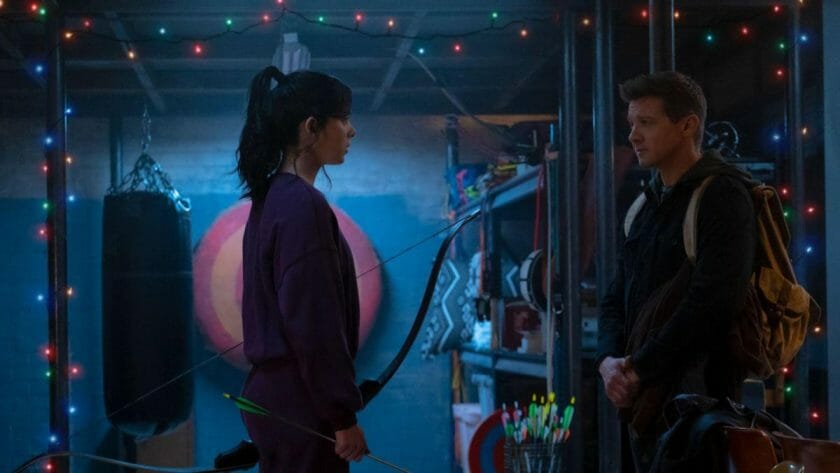 Kate’s apartment is identical to Clint has in the 2012 comic series, even down to the archery practice equipment. Another detail that pays homage to the iconic comic. 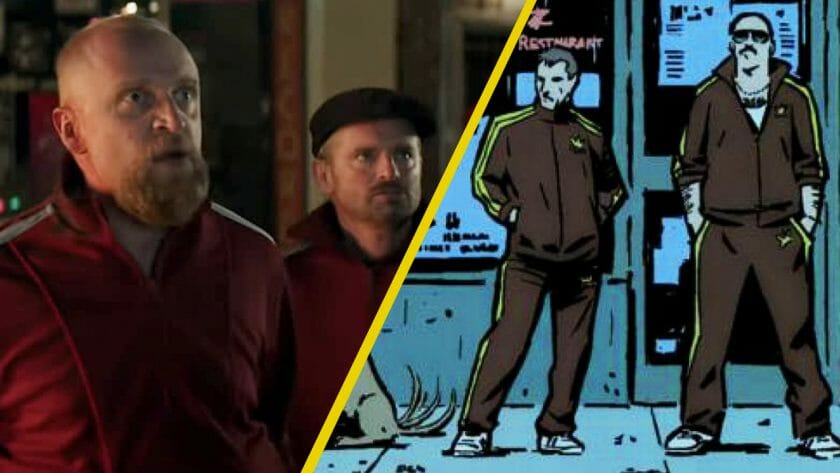 Also known as the Tracksuit Draculas, this is the prominent criminal gang that Clint fights in the comics. The way they look on screen is taken almost exactly from the pages of the comic.

When CLint patches up Kate’s wounds, it’s a lovely mirror to the scene in Black Widow when Natasha does the same to Yelena.

The detective who calls Kate about her apartment fire is another character from the comics. Detective Caudle is someone that Kate goes to for help.

Grills, who Clint has to fight at the LARPing event to win back the Ronin suit, is the name of a character from the comics who is Clint’s best friend and neighbour.

When Kate escapes with Pizza Dog, one of the Tracksuit Mafia takes off his mask, revealing his face. He’s credited as Kazi; Kazimierz Kazimierczak, aka Clown, is a notable villain in the Hawkeye comics. He works alongside Kingpin and runs the Tracksuit Draculas.

Kate’s friend is named Greer, which could be a reference to comics character Greer Grant, AKA Tigra, who, along with Hawkeye, was a founding member of the West Coast Avengers.

Armand Duquesne III is a character taken directly from the comics. While he’s Jack’s uncle in Hawkeye, in the comics, he’s Jack’s dad and the person that gives him his first sword. 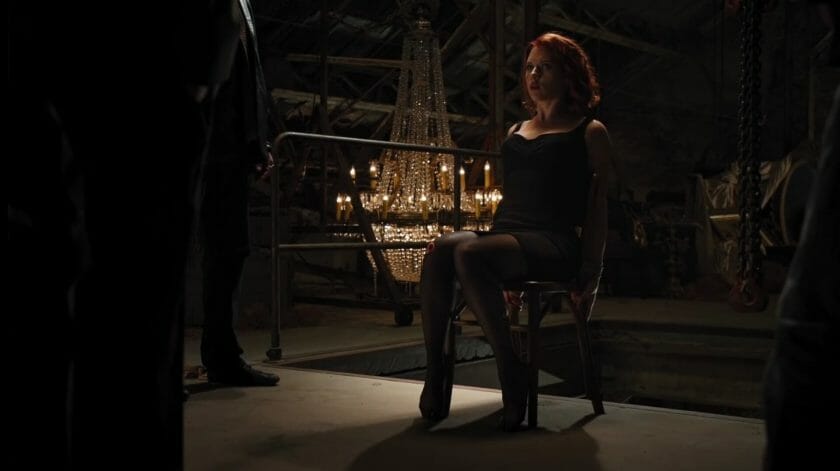 Clint mentions to Laura that he will do a “catch release” with the Tracksuit Mafia, and Laura says it’s one of Nat’s old moves; it’s what she’s doing the first time we meet her in the MCU, at the beginning of The Avengers. 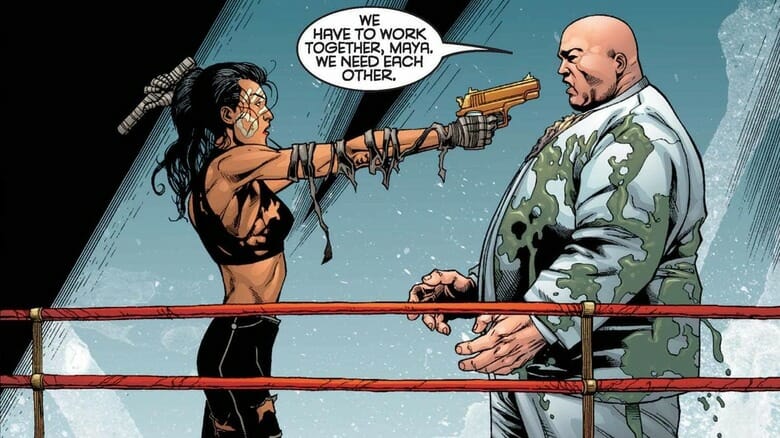 Finally, right at the end of the episode, we’re introduced to Maya Lopez, aka Echo. She appears to be the boss of the Tracksuit Mafia here. In the comics, she’s the adopted daughter of Kingpin, appearing in Daredevil comics, with very close ties to Matt Murdoch. She is also Native American and one of the MCU’s first deaf characters. With speculation that Murdoch and Kingpin could soon be joining the MCU, it’s exciting to see Echo brought to life by Alaqua Cox, who is also set to star in her own Disney+ series.

That is all of the details we noticed in the first two episodes of Hawkeye, were there any we missed? Have you enjoyed the series so far? Let us know in the comments and be sure to check back with us every week where we’ll break down more details that we noticed.