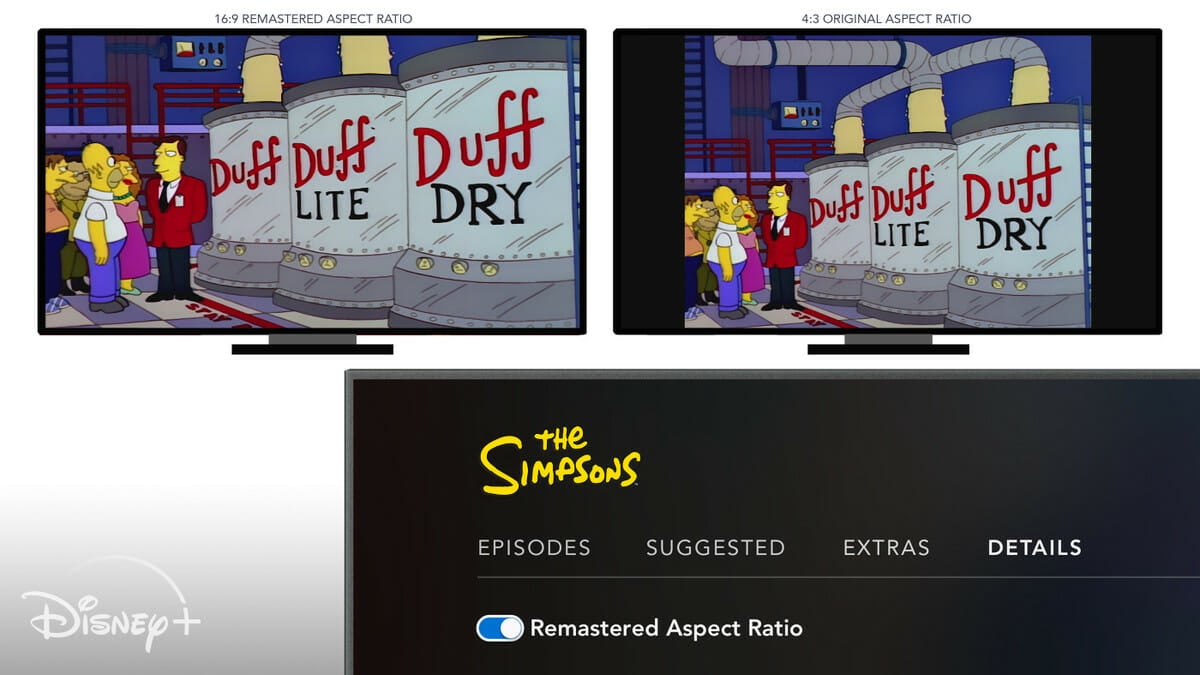 Back when Disney+ launched in November 2019, people were upset that Disney didn’t have the first 19 and a half seasons in their original, 4:3 aspect ratio. It took 6 months until they would introduce a feature that allowed the user, you, to choose whether or not to watch them in the cropped or original aspect ratio by switching a toggle hidden in the Details page. This new delivery system was something that Disney made a huge deal out of, with Joe Rice saying it provides the company with “exciting opportunities for novel ways of presenting content”. In this article, I want to explore some of the ways to which this quote is referring.

In an ideal world, Disney+ would be for family-suitable entertainment, and Hulu would be for the more general viewer. But, we don’t live in an ideal world, and Disney has had to reimagine their strategy regarding international direct-to-consumer products. Based off the news regarding the Star platform, check out the article I wrote, Disney+ could serve as an aggregator for all manners of Disney-owned content. Content that may be unsuitable for kids, however, would be easily findable by those kids if everything was in one app. But, a simple toggle in the Details section of a movie or show could be switched (with PIN protection, maybe) that would bleep out or censor some words/scenes. Switching that toggle off would let you (the adult) watch the movie or show as intended.

Scene selection is a thing of the past, unless you’re a DVD/Blu-Ray collector, but one of the best parts of a DVD was the ability to choose scenes. Some musicals (not sung-through ones) had the ability to just watch the song scenes, and maybe the toggle could function in a similar way. If you switch that toggle, you can watch any of Disney’s vast collection of musical movies with only the songs.

As opposed to the one above, this would actually insert scenes into the movie, lifting the deleted scenes from the Extras section and placing them into the movie if the viewer chooses to do so. A lot of scenes are deleted for brevity’s sake (something I am not known for when it comes to writing articles), but they’re often very fully formed.

Though Disney doesn’t have a “Snyder Cut”, so to speak, what it does have is a series of seemingly pointless edits to a lot of popular movies like Star Wars: A New Hope or Splash. Editing movies in these ways takes the end product further and further away from the product many people grew up watching, which those same people are very vocally against. The toggle could allow the user to see the theatrical cut of a movie, unedited by Disney, and most likely as the filmmaker intended it.

Whilst I admit, I came up a bit short as to how this little toggle could change the landscape of content delivery, I do think it speaks to a broader direction in which Disney+ is heading. Offering this level of granular control over content consumption is how Disney could distinguish its product from the myriad streaming services that exist out there. But, I can’t predict the future so let me know if you’ve come up with any roles that little toggle can undertake.
Thanks for reading! If you like my analyses on Disney+ and the landscape of content consumption now, follow me on Twitter: @BufferOnYT.