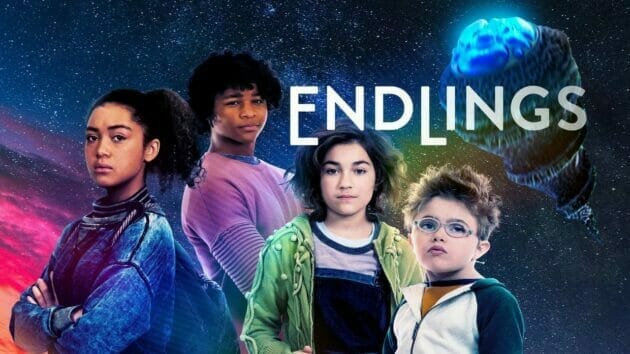 Hulu has released the trailer for Season 2 of the “Endlings” which premieres on the streaming service on Friday, January 15th.

Endlings is a sci-fi action adventure series about four foster kids who come together to save fantastical creatures from across the galaxy who are just like them: alone.

The year is 2041; Julia (Kamaia Fairburn), Johnny (Edison Grant), Tabby (Michela Luci), and Finn (Cale Thomas Ferrin) continue to help their extraterrestrial friend Ling save fantastical endlings. With the aid of their foster father Mr. Leopold (Neil Crone) and animal activist Dr. Abiona Maina (Oyin Oladejo), the group is getting closer to retrieving the remaining ‘last of its kind’ creatures and completing their mission. But when Ling accidentally shows Tabby a vision of their quest failing, the team learns that Ling’s powers don’t just allow the alien access to their pasts but also their futures. This glimpse of what’s to come reveals Infinitum CEO Tresa Hewes (Lisa Ryder), who has been tracking them for her own illusive reasons, capturing Ling and tearing their foster family apart. Together, the group makes the choice to confront the pain of their pasts in order to change their futures and save Ling. This decision to fight fate, kicks off a season of high-octane adventure where four wounded teens must learn to let their hopes, not their hurts, shape the future.