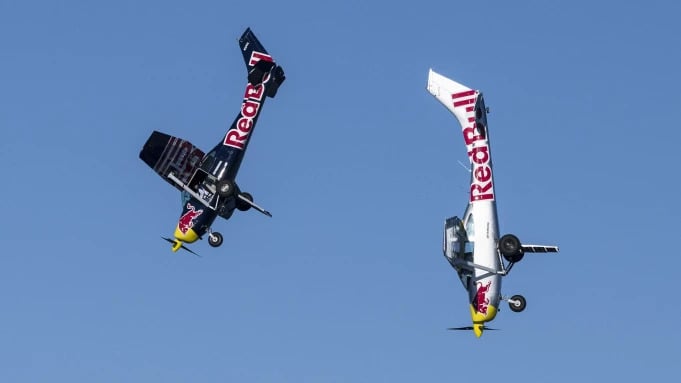 Hulu will livestream a three-hour aerial stunt show exclusively in the United States.

Red Bull’s Plane Swap event will take place on Sunday, April 24, and go live at 7 p.m. ET.  The event will be on YouTube outside the U.S. On Hulu, the event also will be available to watch on-demand starting the next day.

During the plane swap, two members of the Red Bull plane swap will each solo pilot an aircraft, put them into a vertical nosedive, jump out and skydive into each other’s planes over Arizona skies. The companies say the move, happening at 14,000 feet, has never before been attempted.

According to Variety, The Plane Swap stunt required the development of a purpose-built airbrake system installed on the aircrafts’ belly, designed to control aerodynamic stability. Aikins and Farrington worked with aeronautical engineer Dr. Paulo Iscold, who served as lead engineer on the project. Once engaged, the airbrakes will ensure the planes maintain a relatively controlled terminal velocity in nosedive that closely matches the speed of the skydivers’ descent.

The Plane Swap concept is Aikins’ brainchild, inspired by a photo he saw in an aviation magazine in the ’90s. As a professional skydiver, he’s made more than 21,000 jumps and served as the skydiving consultant on the Red Bull Stratos mission (where Felix Baumgartner jumped from a record-setting altitude of 127,852 feet in 2012). Aikins also performed the first-ever skydive without a parachute on live TV (in 2016) and developed Red Bull Aces, the world’s first wingsuit slalom competition that began in 2014. Farrington, meanwhile, boasts more than 27,000 skydives himself. The two are cousins who live together on a 40-acre property in Washington State.

“Plane Swap is the natural progression and culmination of my life’s work as a professional, both in the air as a pilot and skydiver and on the ground as an innovator,” Aikins said in a statement. “It’s the pinnacle of my career, and my goal is to inspire the world and show that anything is possible.”

Watch the Plane Swap trailer at this link.