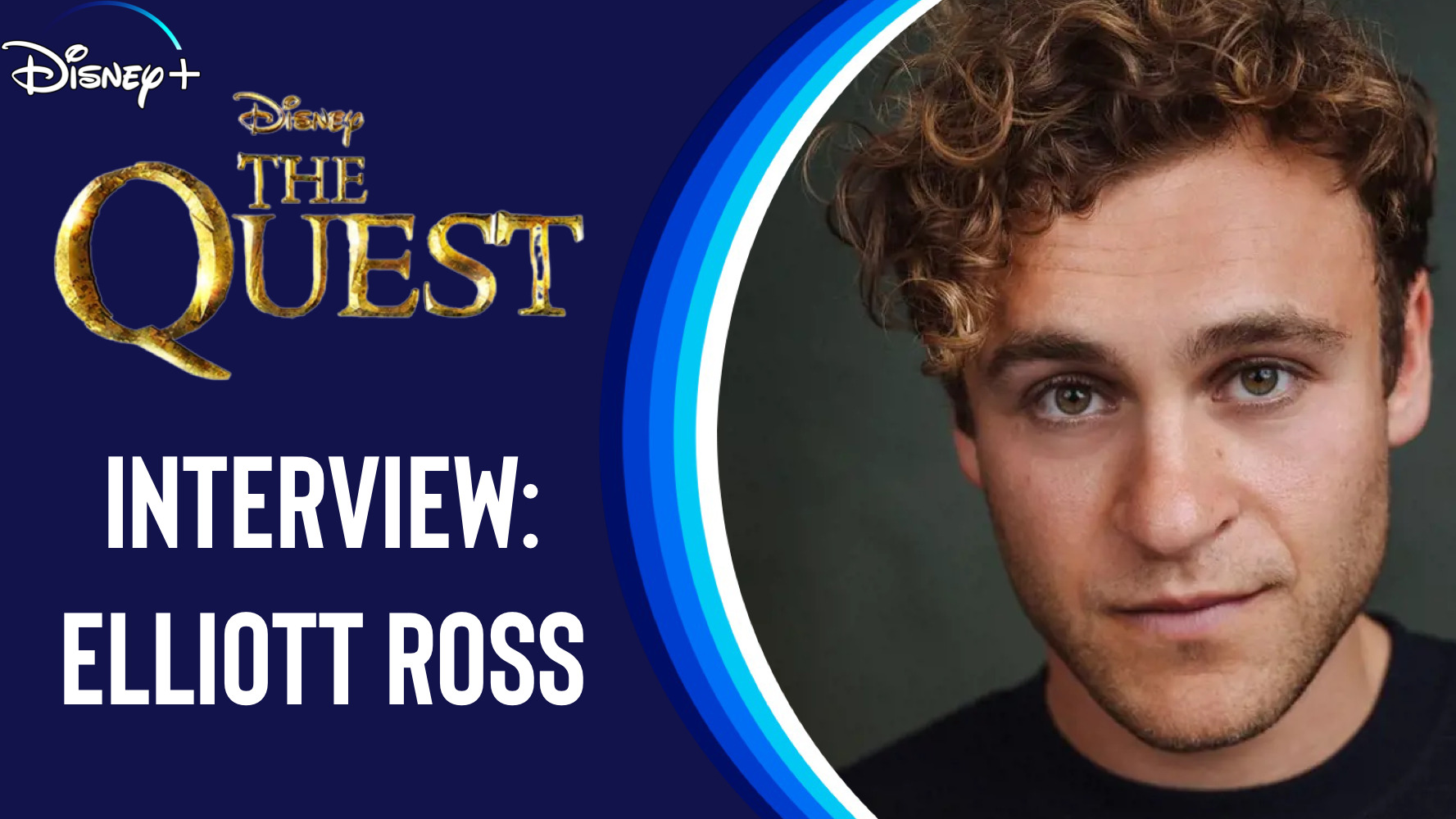 “The Quest,” The new Original series brought to the screen by the Academy Award- and Emmy-winning teams behind “The Lord of the Rings,” “The Amazing Race” and “Queer Eye” starts streaming May 11 only on Disney+.

The show is a ground-breaking, immersive, hybrid competition series that drops eight real-life teenagers (Paladins) into the fantastic, fictional world of Everealm, where they must save a Kingdom by fulfilling an ancient prophecy. Throughout the eight-episode series, these heroes are immersed in a fantasy world come to life complete with a castle, royals, ethereal Fates, all forms of mystical creatures and a Sorceress intent on destruction and power.

For thousands of years, Everealm has been a land of unrivaled beauty and powerful magic. Now, the realm is threatened by a powerful evil Sorceress. As a last hope, the noble Fates summon eight strangers known as Paladins from a world beyond to work together to fulfill an ancient prophecy and vanquish the Sorceress. The Paladins must unlock the hero within through a series of challenges that push their limits to restore balance to Everealm. If they fail, all will be lost. Heroes will rise. Kingdoms will fall.

“The Quest” combines the best elements of scripted and unscripted content to create an immersive competition series where fantasy and reality collide as the teens compete in challenges in a fully-realized world of adventure. Each Paladin’s mind, body, and soul will be put to the test with new surprises around every corner of the unknown land, changing not only the fate of Everealm, but also their own.

Disney Plus Informer recently had the opportunity to chat with Elliott Ross who plays Prince Cederic in the series.

Check out our interview below:

Disney Plus Informer:  First off, I just want to say congratulations on the new Disney+ Original series “The Quest,” and then you’re also starring in the “Band of Brothers” sequel coming up titled “Masters of the Air,” which debuts later this summer on Apple TV+. Thank you so much for taking the time to talk with us today. I want to talk about “The Quest” which is such a unique concept of blending scripted actors with a reality competition in this fantasy realm. And I was wondering if you could tell us a little bit more about the series.

Elliott Ross: Yeah. So, I mean, I guess to elaborate on what you just said a lot is going on. It’s a massive fantasy world of epic proportions where real-life people have dropped into our world and they are helping us complete our quest.  The show is produced by the same producers of “Lord of the Rings,” “The Amazing Race” and “Queer Eye.” It’s just an amazing blend of minds from kind of the top of the game in various fields and kind of got this hybrid fantasy cinematic world with reality element and the competition element and the special effects are amazing. The music is amazing. The costumes, the makeup, and the set design… it’s all kind of extraordinary. I think what they’ve done is they’ve just brought people together for this project and it’s just this amazing pool of talents kind of all working together on creating something really new and unique and it’s exciting.  It’s experimental and, it’s just a lot of fun.

Disney Plus Informer: It’s a fresh idea, but it’s also a reboot of a series that was on ABC in 2014, which had adults competing, and this time you’ve got teenage competitors. Did you watch any of the original series?

Elliott Ross:  I have seen a bit of it, yeah. I kind of made a point of not watching it before I started working on the Disney version just because I wanted to come at it from a totally different thing and from what I’ve seen of the older series… I think our version is very much based on the concept, but it’s a totally new aesthetic and I think what they’ve done is … they’ve taken the best bits from the old series and, brought in a whole bunch of new stuff and just kind of climbs everything by 100.

Disney Plus Informer: You play Prince Cederic, how would you describe your character?

Elliott Ross: Prince Cederic is an awesome character. I really, really enjoyed playing Prince Cederic. He kind of starts out with this kind of brooding, confrontational, combative, aggressive boy, really… he’s a boy at the beginning of the series. And I think for me, the character arc was what I really enjoyed investing in because he goes on this amazing journey of masculinity where he kind of confronts his insecurities and through a series of humbling failures. He kind of knows how to collaborate and to open up his heart and mind to new ideas and other people and he ultimately becomes a man, a better man and I don’t want to give too much away, but really amazing moments in the series where he kind of, you know, he’s learning and it was really cool. It was really exciting.

Disney Plus Informer: Your character is scripted, but because of the format, did you have to improvise any of your lines?

Disney Plus Informer: That has to be hard.

Elliott Ross: Yeah, I mean it was hard. Well, I mean what I would say is that we were very, very well prepared and we just, we did a lot of work getting to know our characters and we knew our characters inside out. So when we were placed in those scenarios where we had to improvise, after a few days of filming, we really kind of slipped into the rhythm of it and we knew what we were doing.

Disney Plus Informer:  In the trailer, we see some archery, were there any special skills or anything you had to learn for your role?

Elliott Ross: Yeah, there were a few things actually and the thing that came to mind was I had to learn how to use a mace, it’s just like one of these… I took a chain with the ball, like a spiky ball on the end.  So, I trained doing stuff like that every day, and I did hand-to-hand combat and I did sword combat and horse riding. I did a lot. So I was up early every morning kind of training and basically any time, any breaks,… we had been filming throughout the day… and I would run off and grab one of the fight directors and practice. So I was really busy learning new skills.

Disney Plus Informer: Wow. And this was filmed at a real castle in Napa Valley. Right?

Elliott Ross: Yeah, yeah, it was, all on location in Napa Valley. The castle was amazing.

Disney Plus Informer:  I saw pictures of the castle it looks like a real magical kingdom right out of a storybook. Did it feel really authentic?

Elliott Ross: It did. It really did. It was very easy to get immersed because it just looked and felt like Everealm. It was, we didn’t really need to do much pretending.

Disney Plus Informer:  And you filmed this during the height of the pandemic? Right?

Elliott Ross: Yeah, yeah, it was last year February to March we filmed. So I was in, Napa Valley from around the end of January to March and I flew over from London, and at the time London was in complete lockdown. All my friends were locked away in their flats. And London is notoriously grey that time of the year. And I was out in Napa Valley in the sunshine dressed like a prince. It was, yeah, it was a very fortunate turn of events for me, particularly at that time of the year.

Disney Plus Informer:  So, I read something, and you can tell me if this is true or not, but it said that you had a crew of over 300 people and you never had to shut down production because of COVID cases.

Elliott Ross: Um actually, no, I know we never ever shut down production. I mean they were, you know, they were brilliant. The Covid department.  But I mean that sounds about right. I don’t know how many people they had to be honest.  Yeah, it was a big machine. It was cool.

Disney Plus Informer: You also have a theater background. So, how does something like this differ from a stage production?

Elliott Ross: I mean, it’s different in lots of ways, I guess in just terms of the style of performance, it’s very different. But I think because this is a hybrid show and it’s not such a straight down the line tv series, there are definitely elements of my theater background that helped. I think, the obvious thing that comes to mind, is the improv.  And I think my theater experience, really helps with that. And what I had already.

Disney Plus Informer:  You’ve been acting for a long time. Do you have any actors that you look up to or admire?

Elliott Ross: Yeah, I mean loads. I think there are loads of different actors that I admire for different films. There were lots of people who were my contemporaries that I admire and people that aren’t in the public eye who I just think are amazing actors. People that I’ve worked within the theater in the UK and I think there are different people across different genres who I think are the best at what they do. I absolutely love Joaquin Phoenix. I think he is an interesting leading man I just think he’s so brilliant, and then I love Hugh Grant. I think he’s the king of romcom and I love watching him play villains now that he’s reached kind of that stage of his career.  I think Ben Whishaw was incredible. I watched him on stage in London and I think everything he does is beautiful as well. Yeah, everyone offers different things.

Disney Plus Informer:  Do you have a favorite tv series?

Elliott Ross:  I’m watching “Ozark” at the moment. That might be my favorite.  I’ve got three episodes left.

Disney Plus Informer:  So finally to wrap things up. Is there anything funny that happened on the set that you can share?

Elliott Ross: There’s like a big banquet sequence in one of the episodes and the food on that table was real and let’s just say well …that Prince Cederic ate a lot of it. And many of my castmates will remember that fondly as well. That was good fun.

Disney Plus Informer: Well Elliott, I really enjoyed talking to you, and thank you so much for your time. I really look forward to watching “The Quest” and we wish you all the best on your journey ahead.

Elliott Ross: Thank you so much for having me. I’m looking forward to everything as well.

“The Quest” streams exclusively on Disney+ starting on May 11th.  You can check out the trailer for the series below: