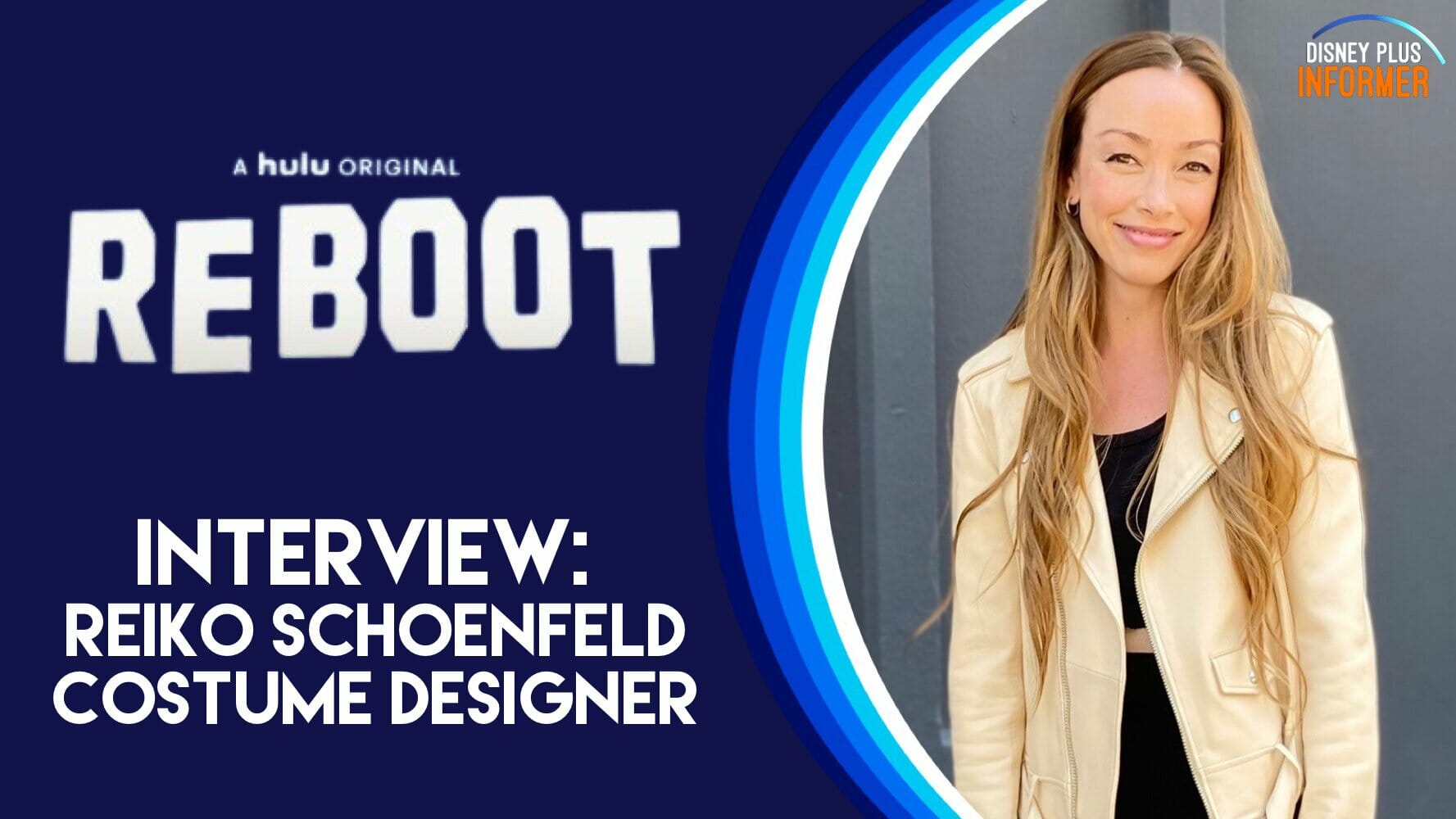 The new comedy series Reboot just premiered on Hulu in the US and on Disney+ in Canada, Australia and New Zealand on September 20th.  The Steven Levitan (Modern Family co-creator) created show is already a hit with audiences. The story begins when Hulu reboots an early 2000’s family sitcom, forcing its dysfunctional cast back together. Now they must deal with their unresolved issues in today’s fast-changing world.

Disney Plus Informer recently had the pleasure to chat with the show’s costume designer, Reiko Schoenfeld.  Reiko filled us in on how she and her team collaborated with the showrunner and actors to create a complete wardrobe for the cast for two different time periods, how she brought authenticity to the table, what a costume designer’s job entails and so much more.  Read on for the complete interview below:

You are the costume designer for the new comedy series Reboot, but I was also wondering if you could tell us some other projects that you’ve worked on in the past.

Sure.  I started doing this when I graduated from college in 2002 and one of the shows I’ve been fortunate to work on is How I Met Your Mother. I did the whole series run of that. I started my job as a P. A on Jag, the old military show on CBS. I worked on a great series for CBS called Life in Pieces a couple of years back. It was on for four seasons and it was a huge wonderful cast of fabulous actors. I did a really great show called Friends With Better Lives that was also on CBS and had such great actors. We were only on for 1 season, but we really, really loved it and had a great time. If you ever wanna dig into into that series, it was a really fun one. It’s just a great cast too. I worked on a sitcom called Dr. Ken with Ken Jeong and that was a really special one and I’ve maintained my relationship with Ken after and keep working with him on that as well. I did American Housewife on ABC and that’s just some of them, some of the exciting group efforts that we accomplished.

Going back to Reboot, I know you worked closely with the showrunner and actors to create a shared vision of each character. What were the early discussions like and how much freedom were you given to come up with your own interpretation of the characters?

You know, I look at my job as a team effort. I really do. I like to be a collaborator. I like to talk to my EP’s and understand their vision from the get go. I like to bring that vision to fruition for them and I like to talk to my actors. So honestly, the team gave me carte blanche to create what I wanted to create, but really what I wanted to create was their vision, and I wanted to make sure that I was able to do that for everybody. So, Steve and Danielle and Jeff Morton and I had a Zoom and I just listened to Steve and what he wanted to accomplish which was authenticity… bringing the real life factors, to be able to show the audience what really happens behind the scenes on sets. So honestly, I’m so happy with with how it came out, but it was a group effort. It really was.

The show encapsulates a time shift from the early 2000s to present day. Were there any shows from that time period that influenced your ideas?

Yes, definitely. When we go back and shoot pops of this Step Right Up show from the early 2000, my team and I kind of brainstormed what our favorite shows were back then. One of the most popular ones was The O. C. That time period was really focused on baggier clothing for men, muted colors for men… but as far as the ladies go, we had the really low cut jeans, Rock and Republic was big in the jeans…and bright colors, t shirts and tops that kind of had that odd stretchy, shimmery material. So, for these quick pops, we just wanted them to be quick reads. So we tried to pick brighter colors for Judy. We tried tried to accessorize with large belts that screamed that time period and really just wanted to maximize what we had on the bodies on our actors for the short amount of time that we did.

What does a costume tell us about a character?  Are there certain traits that you look for that translate into your decision for the character’s wardrobe?

Most definitely. I think when I talked to my actors about their characters in the beginning, I want to hear what their idea is for their back story. I wanna know where they came from, what they like to do on their off time, definitely demographic.  For example, Keegan’s character has been living in New York. So, he’s bringing in the New York feel. He’s bringing in the cool coats, the cool blazers, the layers, the scarves, the cashmere sweaters. He’s bringing in slightly a darker tone in color. Juxtaposing Johnny and Judy where their characters have been here in Los Angeles. Well, Judy’s character, Bree has been  a princess in the frozen tundra for a few years. But we wanted to show different colors, different textures, different tones to really showcase each character. With Bree’s character, we wanted simple, classic jewelry that set a tone for Bree. That’s another way that we can kind of demonstrate character, but it’s a conversation that I have with each actor before we begin and with my showrunner to understand where everybody comes from because that adds to the backstory.

Your work on the project starts even before filming actually begins. How much time are you given? And are you on a strict deadline?

A lot of my work is done before we start shooting. Prep work for us is extensive.  Depending on how many episodes we’re shooting in a season, prep can be a few months, it can be a few weeks, but my prep time with my team is invaluable. We do a ton of shopping. We do a ton of research. I build closets for each of my characters. I like to have at least two racks of clothes at all times on our wardrobe trailer so that they feel like it’s actually their clothing. We want the characters to feel real.  We want them to exude not only chic and current trends, but we want them to feel authentic and so that comes from having closets…reused jeans, having reused a couple pairs of shoes. And so all of that comes from prep work and then when we start shooting, we read each script and their specific design needs that happen within each episode. Then we’ll tackle that each week. But for the most part in prep work we do most of the big shopping.

In regards to Reboot, did you have a favorite character in particular that you had fun picking out the wardrobe for?

I mean everyone is so different. I think we really did a great job delineating each character with specific looks. Paul Reiser has my heart. He is a gem. He is a sweet, sweet man and I just want to hug him all the time. I love dressing Paul. I think we ended up with a great mix of comfortability with his character but also making him look really good. Calum’s character was really fun to dress. Johnny was awesome because he’s so eclectic and we were able to source amazing vintage pieces for him. Judy was amazing because she’s just so naturally gorgeous. You just want to squeeze her all the time. I mean Keegan’s just a wonderful, wonderful person to begin with and just a beautiful person to dress. So his clothing was fun and Krista and I go way back because she was on Dr. Ken, so I’ve known Krista for years and I love dressing her in power suits. We just took it to a new level because we wanted to make them fun and youthful but also make her feel like a young executive at Hulu. So, I don’t have an answer for that because I don’t have a favorite. Really, genuinely loved dressing everybody.

Do you have a dream project that you would love to design costumes for or a certain time period you would like to work on?

You know, this may sound strange, but my dreams have been made already. This is what I love doing. I love working with my team. My team is my work family and we work really hard but we also have fun and we laugh and we choose fun projects and Reboot truly is one of my most favorite projects. I’m proud of it. I think Steve Levitan did an amazing job with his writing staff. I think they’ve brought a show to television that we haven’t seen before and I I’m proud of the authenticity that we’ve brought to the show as a whole. And so, if the fans love it and we’re able to continue on Reboot for years and years, I would be a very happy camper.

Finally, what happens to the costumes after filming? Are they stored in a warehouse or do the actors get to take some of the pieces home with them?

I think my best answer for that is… it does depend on the show. Yes, there are definitely pieces that the actors always request to have and it depends on how long the show is on. For example, for How I Met Your Mother, we had an entire stage full of racks of clothing. They were very kind to the actors. They gave the actors first dibs on whatever they wanted to take. We did auctions for different companies, we donated some of the clothing. We do have to store everything that is worn on camera and catalog it and make sure we have pieces head to toe in case we need to go back and do reshoots, but once the show is aired and once the season’s finished, it’s up to different productions what they want to do. But really, it’s quite amazing to see how much is accumulated after a couple of seasons on the show.

New episodes of Reboot release every Tuesday on Hulu in the US and on Disney+ in Canada, Australia and New Zealand.  We also expect the series to release on Disney+ in the UK however a premiere date has not been announced yet.

You can watch the trailer for Reboot below: