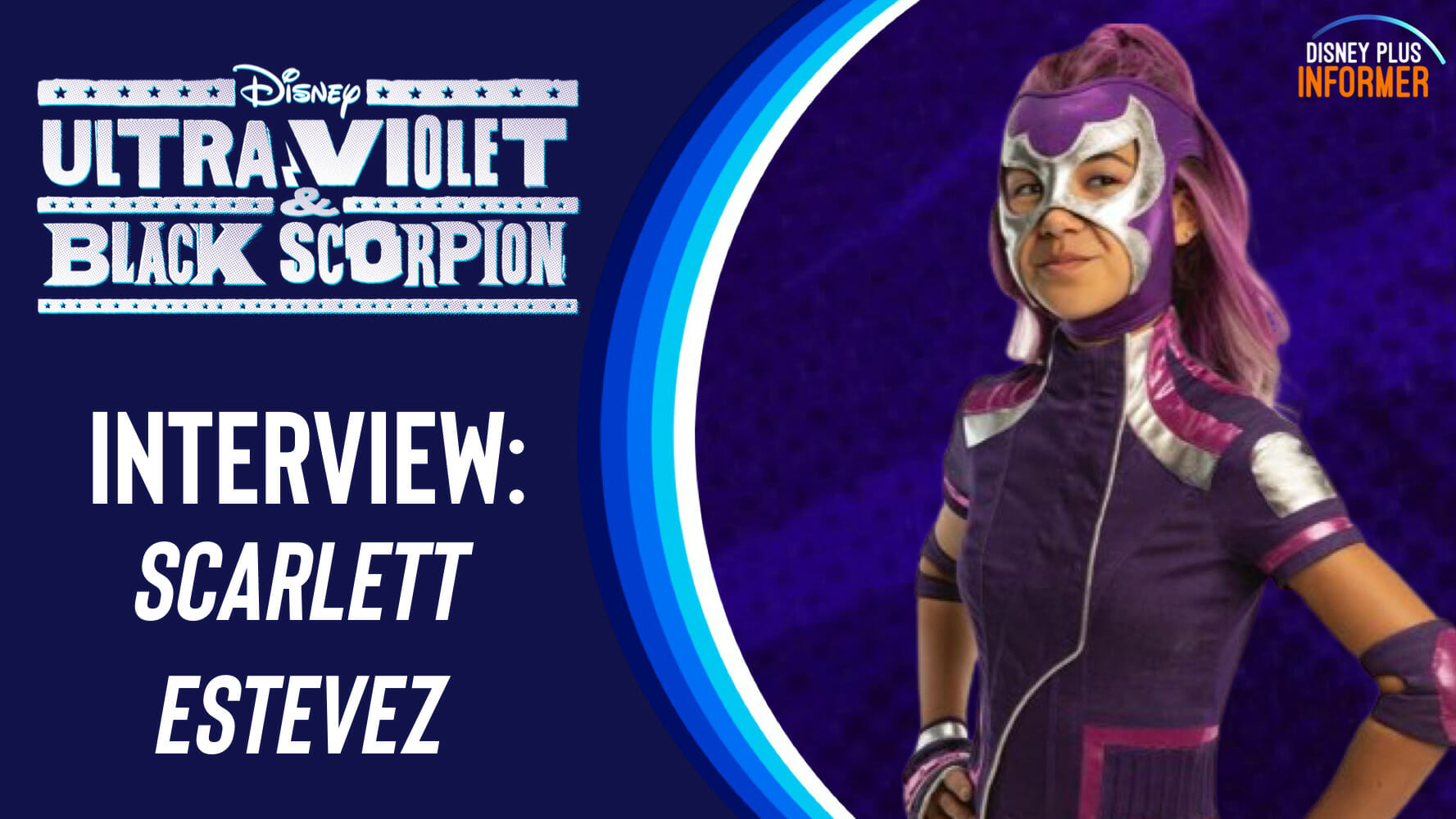 “Ultra Violet & Black Scorpion” premiered on Disney Channel last June and has quickly become a hit with audiences.  In the heart-filled comedy series, a magical luchador mask selects 13-year-old Violet to become Ultra, a superhero like her uncle—Black Scorpion. Ultra begins her own secret superhero training with her uncle, all while navigating the ups and downs of middle school.

Disney Plus Informer recently had the opportunity to chat with Scarlett about “Ultra Violet & Black Scorpion,” her recent partnership with Invisalign, balancing high school, and her career, and more.

Scarlett is really excited for everyone to check out her new series which she says is about Mexican luchador superheroes.  She describes her character Violet, as your average everyday Mexican American teenage girl who is trying to find her way through middle school.  And then she finds this mask that gives her super powers and she has to learn how to balance her new superhero life with her life at home.

Estevez started acting at the early age of 4.  The actress already has an extensive amount of TV and movie credits under her belt including Disney’s “BUNK’D,” the Disney Channel Original Movie “Christmas Again,” “Daddy’s Home,”  the 2017 sequel “Daddy’s Home 2” and “Lucifer” just to name a few.  Scarlett says at first she started acting just to have fun and then became more passionate about it as she got older and knew she wanted to make a career out of it.

Now a freshman in high school, Scarlett has a lot on her plate balancing school, work, and her new partnership with Invisalign, which she says is a priority for her.

Part of Invisalign’s “Smile Squad,” Scarlett loves the “drama-free” use of Invisaligners and their simplicity, “You can take them out whenever you want to eat food and brush your teeth like normal, that’s really awesome and also they’re nearly invisible so you can’t see them on screen and something that’s so amazing and really works for me and my schedule.”

You can watch one of Scarlett’s TikTok videos about using Invisalign below:

@scarlye07 Get unready with me with the help of @invisalign! Link in bio to learn more #invisalignpartner #InvisIsDramaFree #smile ♬ original sound – Scarlett Estevez

We know Scarlett, cares about her smile, and when asked if she follows any beauty regimen, she says she’s trying to figure out the perfect routine for her skin but for now, she makes sure to wash her face and use a little moisturizer and is good to go.

It’s hard to imagine Estevez has any downtime with her busy schedule, but Scarlett says she loves to go roller skating in her free time – something she discovered during Covid- and of course hanging out with friends.

Because Scarlett plays a superhero on TV, I was interested if she had a favorite superhero of her own.  She has recently taken on the task of bingeing all of the Marvel movies and claims Captain Marvel as a favorite.

You can find Scarlett on all social media platforms including TikTok @Scarlye07 and Instagram @Scarlye07!

New episodes of “Ultra Violet & Black Scorpion” return to Disney Channel on October 7th.  Episodes from the first season are also available to stream now on Disney+ in the US.