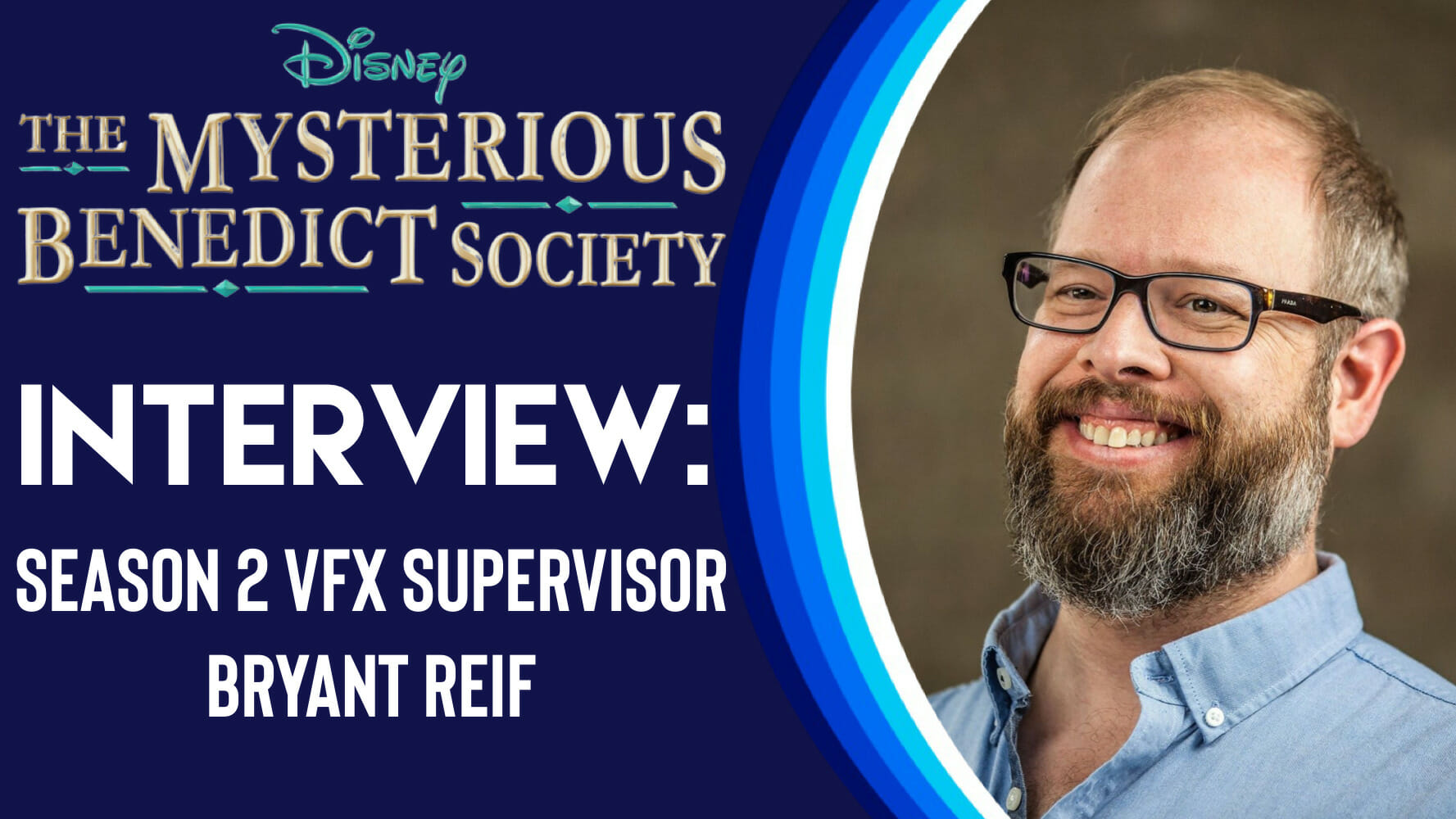 The Disney+ Original series “The Mysterious Benedict Society” follows four gifted orphans who are recruited by the peculiar Mr. Benedict for a dangerous mission to save the world from a global crisis known as The Emergency.  The Season 2 finale episode just debuted on Disney+ on December 7, 2022.

This season, Reynie, Sticky, Kate and Constance, the four gifted orphans who were recruited by the eccentric Mr. Benedict (Tony Hale), embark on another mission to save the world from the nefarious plans of his twin brother Dr. L.D. Curtain (also Hale).

Disney Plus Informer recently had the chance to chat with FuseFX’s Bryant Reif who is the DFX supervisor for the show who offered insight on how the smallest details and the computer generated ship The Shortcut were digitally created.

Read on for the full interview below:

You are the FuseFX CG supervisor for Season 2 of “The Mysterious Benedict Society” which is streaming now on Disney Plus. I’m so excited to talk to you about your work on the series, but first I was wondering if you could tell us some of the projects you’ve worked on in the past and a little bit about what your job entails.

Sure. My name is Bryant Reif and I’ve been doing this for quite a while. Interestingly enough, one of the first projects I ever worked on was another Disney show, it was a movie called Flubber back in the late nineties. I’ve worked on some other movies including The Aviator and Memoirs of a Geisha, but lately, it’s been mostly television shows. I’ve been working on 911 a show on Fox and then I’m currently working on the second season of the Shining Vale.

Can you describe your job for us?

What I do, is I basically manage the team of 3D artists who are doing the computer-generated parts of the show. So, basically creating on a computer things that don’t exist. For instance, we have a boat called The Shortcut in the second season that is completely made up.  We had to create that from and based it off of The Queen Mary, but the actual boat itself was a unique boat.  We had to build that in the computer so that we could put it on screen in these situations that couldn’t be filmed. We couldn’t go out in the middle of the ocean and shoot a boat like this because these boats don’t really exist anymore. We had to create it all on the computer. So it’s basically managing that and managing the team for the show.

Going back to “The Mysterious Benedict Society, “the second season takes place in a fictional European town in the 1950s and 60s. What research did you have to do beforehand? And were there any inspirations that you used to accurately create this time period?

Yeah, we were given an extensive art book by the production, by Disney. They had a team of artists coming up with a lot of styles and fashions to kind of represent this place in time that they had invented for the show. It’s based very much off of Europe in the fifties and sixties, but it’s definitely its own thing. Borrowed from fashion and architecture and all these things from those eras, but then blended it together into a completely unique sort of style that we see throughout the show. In our research, we relied a lot on what Disney provided to us. But then also we embellished upon that by doing our own kind of deep dive into 1950s and 60s, the clothes people would wear and the cars they would drive and the trains that they would travel on and all of our designs were very much based on all that research.

So let’s talk about The Shortcut and as you said, this is a computer-generated ship designed to look like The Queen Mary. The Queen Mary is the famous ocean liner from the 1930s. It’s now stationed in Long Beach. I’ve seen this ship and it has a massive commanding presence in person, which actually translates on screen as well. I was wondering how you and your team accomplished that.

Yeah. First, we visited The Queen Mary because we’re based in Los Angeles. So, it was an easy trip for us and took some tourist photos of the boat that we could get some reference for how it was built and play with that. A little bit of the first, second and third episodes was filmed on The Queen Mary. They closed it down for filming. So all that stuff that you see when the kids were on the boat, that is the real boat. They’re actually on The Queen Mary, but we had to embellish a lot, do a lot of cleanup, because The Queen Mary is a great old boat, built in the 1920s, I believe, or 30s. It’s showing its age. So we had to clean everything up and make it look as if it were a brand new state of the art boat for the time period of the show. Based on that footage, we had a lot of reference to what the boat should look like in close and then the far away stuff, we had a lot of our own reference images that we used to construct the boat as a whole.

Were there certain details that you were looking for?

Oh yeah, we went down to the bolts on the banisters, the exact type of wood that they would use on the handrails, and the color of the metal they had on there. The bolts, we went down to pretty fine detail because the audience has eagle eyes for this sort of stuff. We wanted to make sure that we made it as authentic as possible.

So, The Queen Mary is kind of known for being haunted. Was there an eerie feel to the ship? And was that something you wanted to carry over for The Shortcut?

No, it’s funny because I do know that. But it’s interesting because I proposed to my wife on The Queen Mary. So to me, it has a very romantic feel. I mean, much less eerie in the nature of the show. The Society isn’t so much eerie, it is a little more fantastical. So, for me, I think of The Queen Mary was right in line with the show, kind of this grand majestic boat with kind of a romantic, fantastical feel to it.

One of my favorite scenes of The Shortcut is we see the ship sailing off into the sunset and it looks so realistic, even the sky and the waves.  Was that all digitally recreated?

Everything except for the actors in the foreground. We filmed those against the giant green screen. But then everything else you see behind them all, the ocean and the sun and the clouds and the boat and the wake and the smoke coming out of the Smokestacks were all done on the computer.  All the ocean had to be computer generated. Just thousands of gigabytes of data had to be generated to do all that.

What was the most challenging element for you and your team during the process?

The water that I just mentioned. The water simulations to make it really feel like an ocean and behave like water and react the way that you expect it would behave. And when a ship plows through it makes waves and splashes and all those little fine bits of detail in this huge wide open ocean, all had to be done over weeks and weeks of computing to get all that ocean water to behave correctly. So by far, the biggest challenge was doing all that. Getting the ocean to look like an ocean and behave like an ocean.

You can view some of Bryant’s and his team’s work in the before and after shots below: 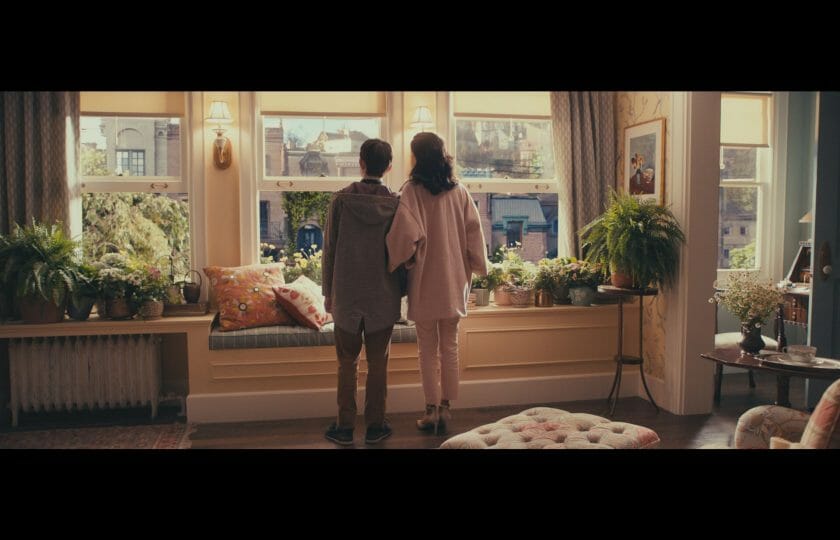 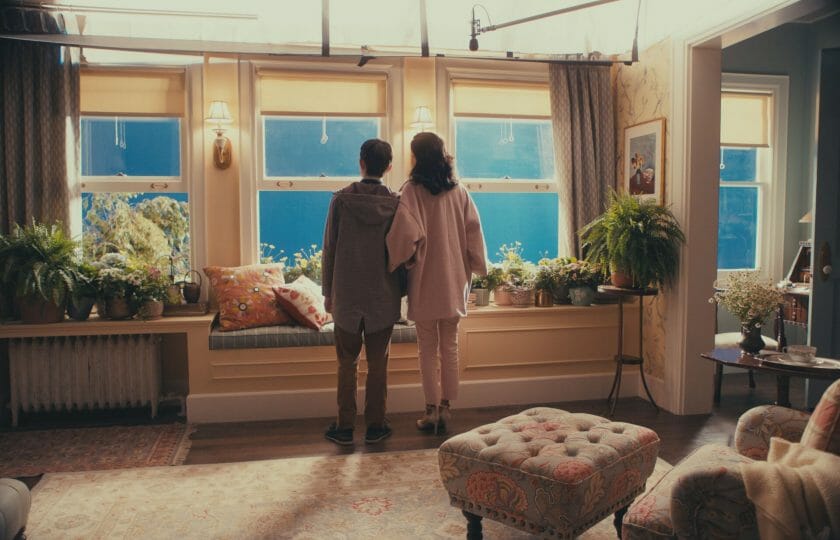 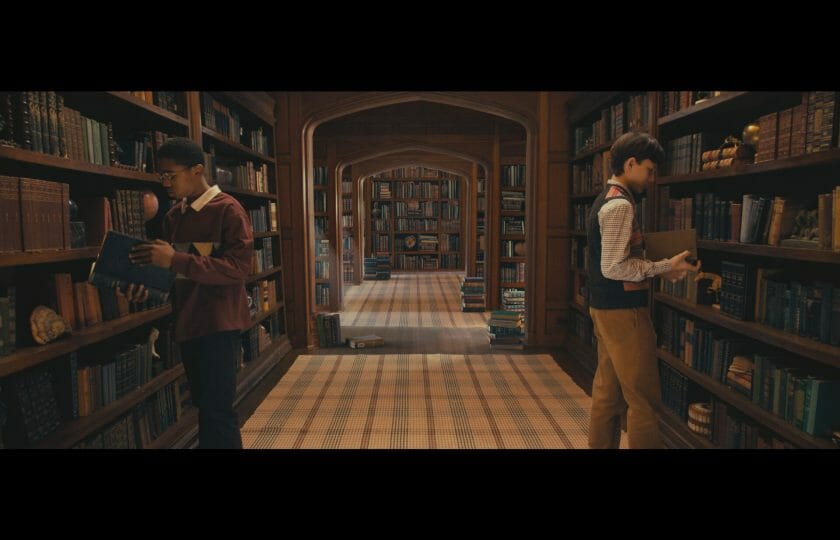 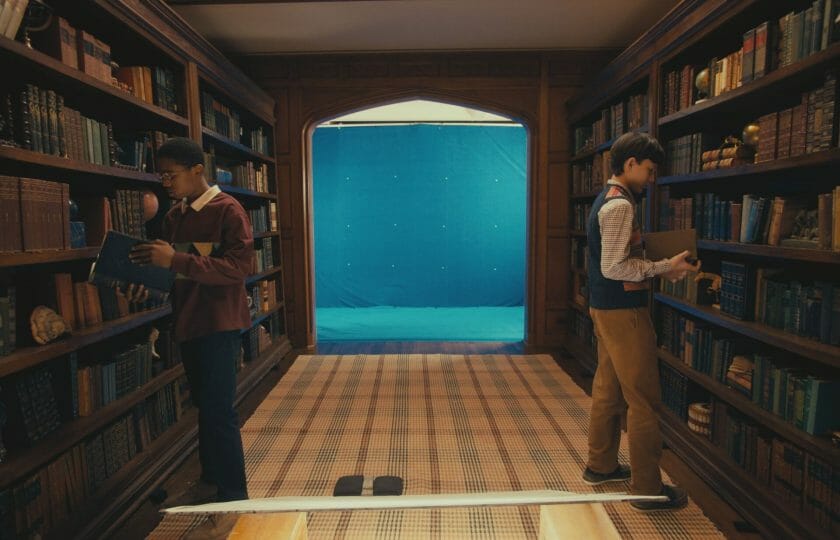 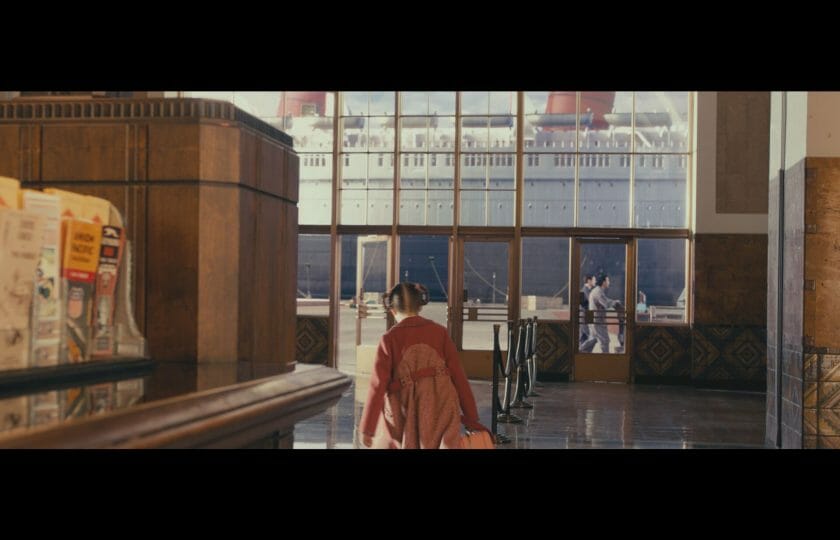 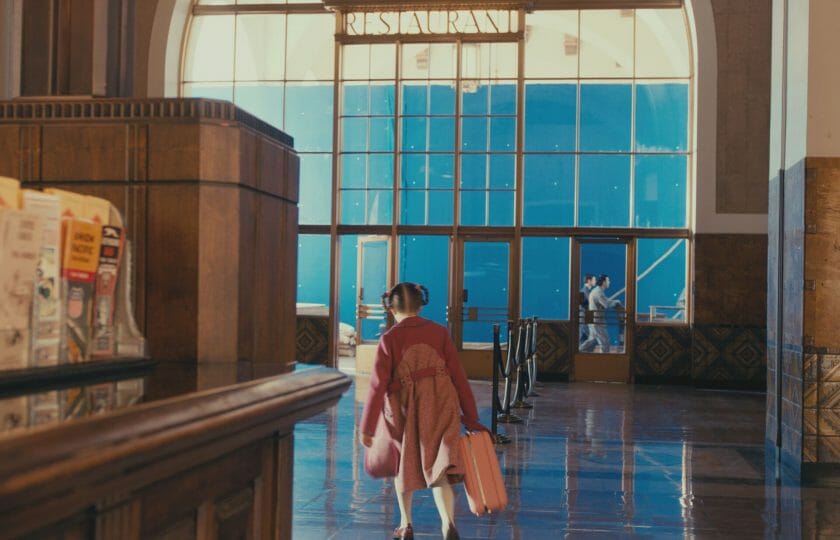 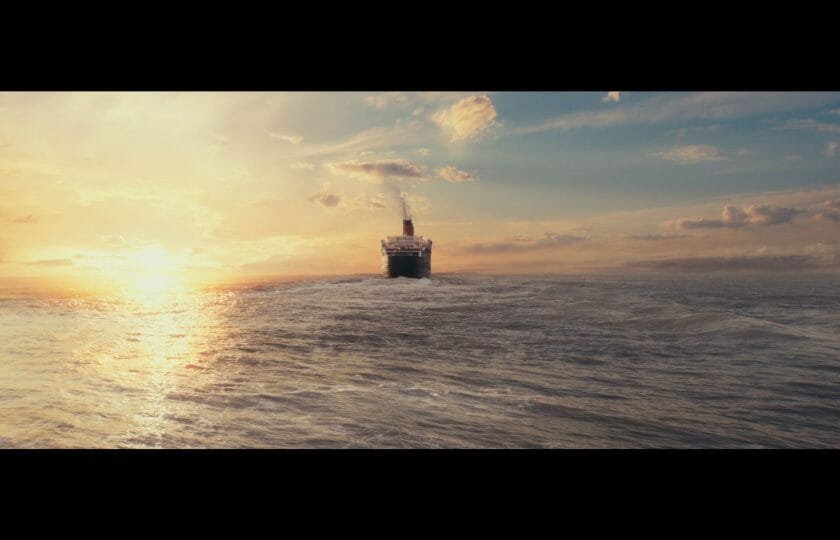 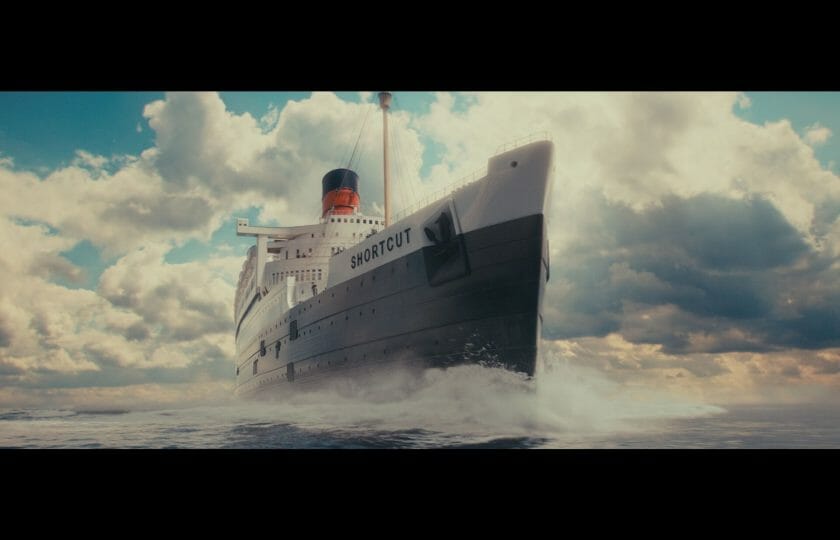 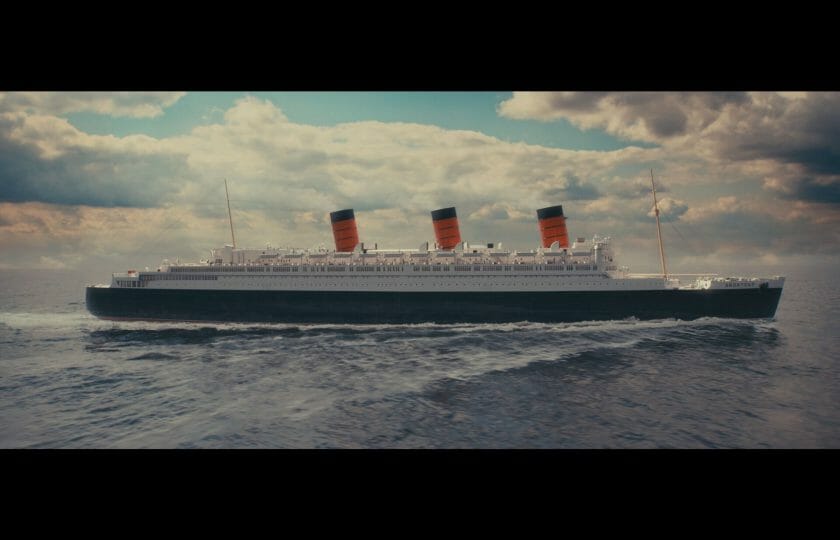 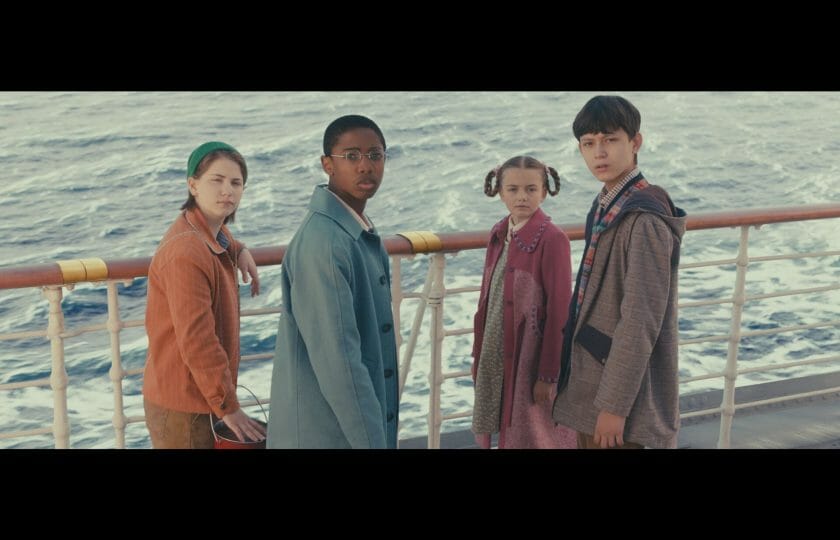 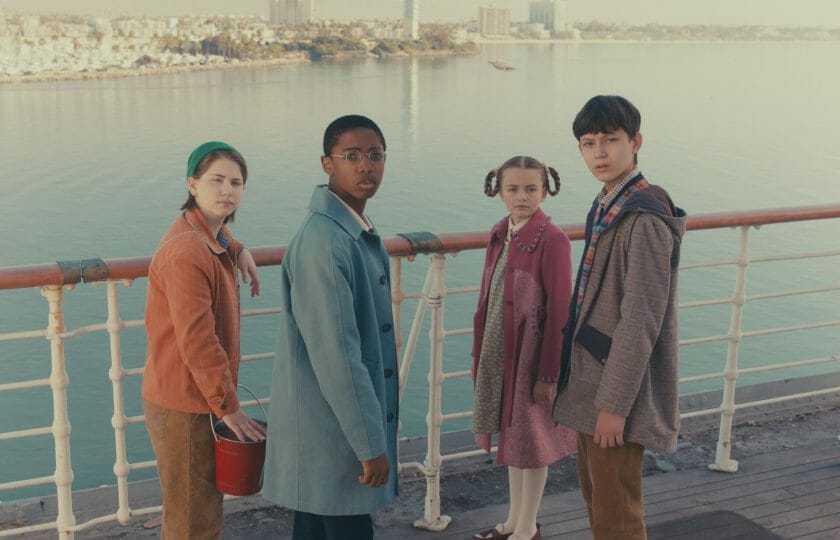 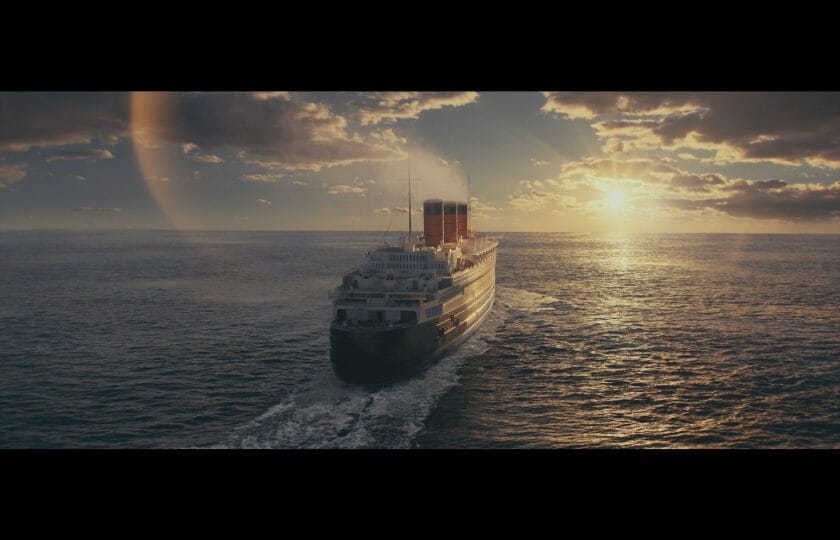 Seasons 1 and 2 of “The Mysterious Benedict Society” are available to stream now on Disney+.