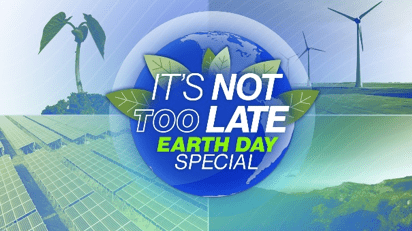 Zee, along with ABC News Correspondents Matt Gutman, Gio Benitez and Maggie Rulli, will take viewers on a global journey of discovery to showcase the planet’s rich biodiversity that’s at stake, the scientific link between extreme weather and climate change, and the auto industry’s bold plans to become carbon neutral within the next 20 years.

Zee will bring viewers inside the only commercially operating lithium mine—the rare metal that could be key to reducing fossil fuel consumption—but can enough of it be made, and what impacts will it have on the environment?

The special also features interviews with the first White House climate advisor Gina McCarthy, former EPA head Lisa Jackson, the first Middle Eastern female astronaut to travel to space, Anousheh Ansari, and some of the youth activists around the world aiming to make a difference. “It’s Not Too Late: Earth Day Special” will stream Thursday, April 22, at 8 p.m. EDT on ABC News Live.