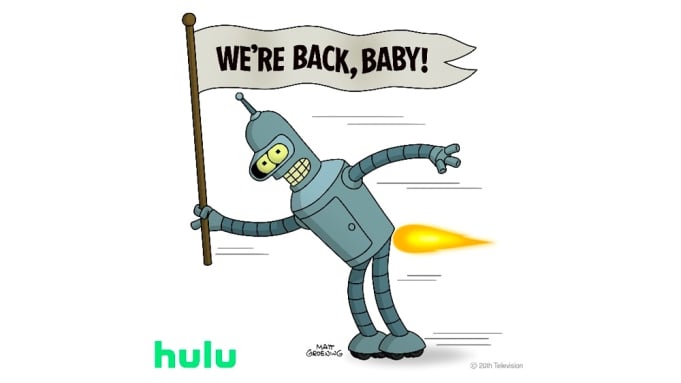 Last month, it was announced that the animated sci-fi comedy hit “Futurama” had been revived for a 20-episode run on Hulu which will premiere in 2023.

The series first aired on Fox for five seasons before moving to Comedy Central for 3 more seasons.  “Futurama” centers around pizza delivery guy Fry who accidentally freezes himself in 1999 and wakes up a thousand years later.

At the time of the announcement, it wasn’t clear if John DiMaggio, who provided the voice for robot Bender, would return for the new series.  Today, Deadline has confirmed that DiMaggio has closed a deal to reprise his role as the beloved robot.

“I’M BACK, BABY! So damn grateful for the love and support of fans and colleagues alike during this whole time (especially my wife, Kate), and I cannot wait to get back to work with my Futurama family,” DiMaggio said. “#Bendergate is officially over, so put it on the back of a shelf behind Xmas decorations, or maybe in that kitchen drawer with all of the other crap you put in there like old unusable crazy glue, or maybe even put it in a jar you save farts in. Whatever floats your boat, I don’t care, you get the picture. I’M BACK, BABY! BITE MY SHINY METAL ASS!”

“Futurama” will also release on Disney+ internationally including the UK and Ireland.