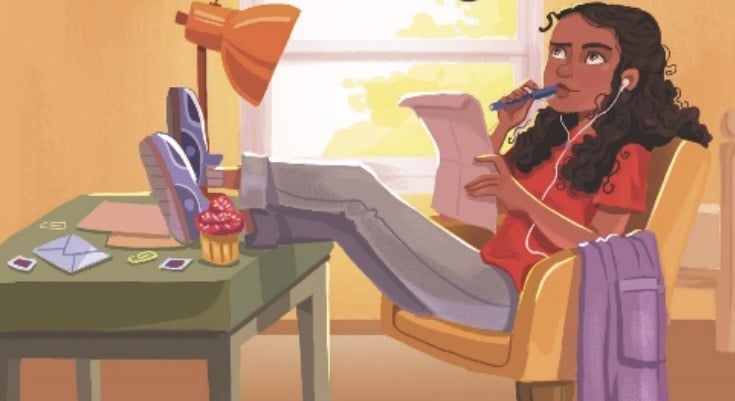 “From the Desk of Zoe Washington” centers around middle-schooler and aspiring pastry chef Zoe, who sets her sights auditioning as a contestant on Food Network’s “Kids Bake Challenge” the summer before seventh grade. One day, Zoe receives a letter from her father, Marcus, who was sent to prison right before she was born. Because Zoe’s mom has never wanted her to have a relationship with Marcus, Zoe keeps the letter a secret. Zoe and her father soon begin corresponding regularly and Marcus shares his favorite songs with her and is supportive of her baking-competition dreams. When Marcus proclaims his innocence, Zoe is shocked: How could someone innocent end up in prison? With the help of her grandmother and her friend Trevor, Zoe begins to learn about systemic racism and how Marcus may have found himself unjustly imprisoned and embarks on a quest to set her biological father free.

“Marks’ book does a beautiful job of delicately weaving together the challenges and triumphs of life and the enormity of social injustice and systemic racism through the lens of an almost-seventh grader,” said Ayo Davis, executive vice president, Creative Development and Strategy, Disney Branded Television. “This is a perfect example of the type of premium storytelling that will not only entertain but will touch our audience on many levels as they see these topical issues reflected on the screen.”

Published in 2020, “From the Desk of Zoe Washington” has already garnered much praise. Among the recognition, notoriety includes 2020 Cybils Award winner, 2021 Edgar Award nominee, named a “Best Book of the Year” by Parents magazine, Book Riot, Kirkus Reviews, Booklist, and Chicago Public Library as well as the Boston Globe and NPR’s “100 Favorite Books for Young Readers.”