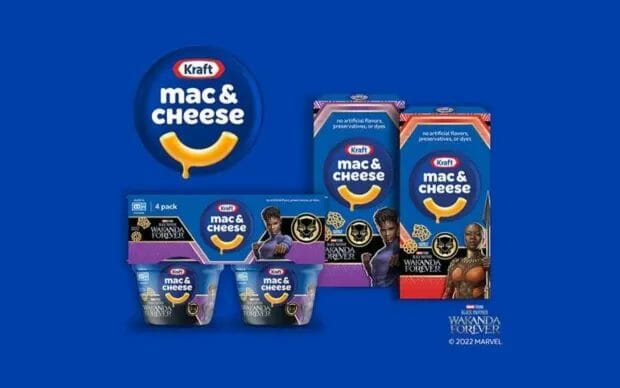 Kraft is launching a brand new mac & cheese to coincide with the theatrical release of Marvel’s “Black Panther: Wakanda Forever.”  The film will release in theaters on November 11, 2022, and to celebrate, Kraft Mac & Cheese is set to launch a limited-edition Black Panther-inspired version of its beloved boxed (and microwave-ready) meals.

The macaroni will feature Wakanda-inspired noodle shapes including the iconic Wakanda shield, and the Kimoyo Blue Bead bracelet worn by various characters.

The new limited-edition Kraft Mac & Cheese Black Panther boxes are set to be available on grocery shelves nationwide this fall with a suggested retail price of $1.49 and will be available while supplies last.

Queen Ramonda (Angela Bassett), Shuri (Letitia Wright), M’Baku (Winston Duke), Okoye (Danai Gurira) and the Dora Milaje (including Florence Kasumba), fight to protect their nation from intervening world powers in the wake of King T’Challa’s death. As the Wakandans strive to embrace their next chapter, the heroes must band together with the help of War Dog Nakia (Lupita Nyong’o) and Everett Ross (Martin Freeman) and forge a new path for the kingdom of Wakanda.

You can watch the first trailer for “Black Panther: Wakanda Forever” below:

“Black Panther: Wakanda Forever” is scheduled to release in theaters on November 11, 2022.