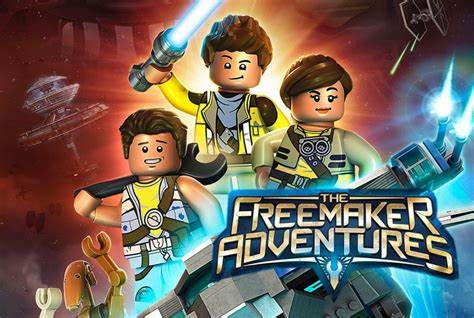 Both seasons of “LEGO Star Wars: The Freemaker Adventures” have returned to Disney+ in the United States and Canada.  The show was removed from Disney+ globally last month for unknown reasons.  The removal came as a bit of a surprise since Disney+ does not announce which titles will be leaving every month.

It is currently unknown when and if the series will return to Disney+ in other countries including the UK, Ireland, Australia and New Zealand.

The Freemakers are sibling scavengers operating a salvage and repair shop on a space station at the distant edge of the Empire. When Force-sensitive 12-year old Rowan Freemaker discovers the Kyber Saber, an ancient artifact with a powerful connection to the Jedi, his world is turned upside down. Along with his quick-witted older sister Kordi, ace pilot brother Zander, and a refurbished battle droid named Roger, Rowan is thrown into an epic struggle against the Empire to restore peace to the galaxy.

“LEGO Star Wars: The Freemaker Adventures” is a TV show produced by Wil Film, Lucasfilm, LEGO and Lucasfilm Animation. The show was originally broadcast on Disney XD in the United States in 2016.