Skip to content
Home » Blog » Loki Episode 6: All The Easter Eggs and References We Noticed In The Season 1 Finale 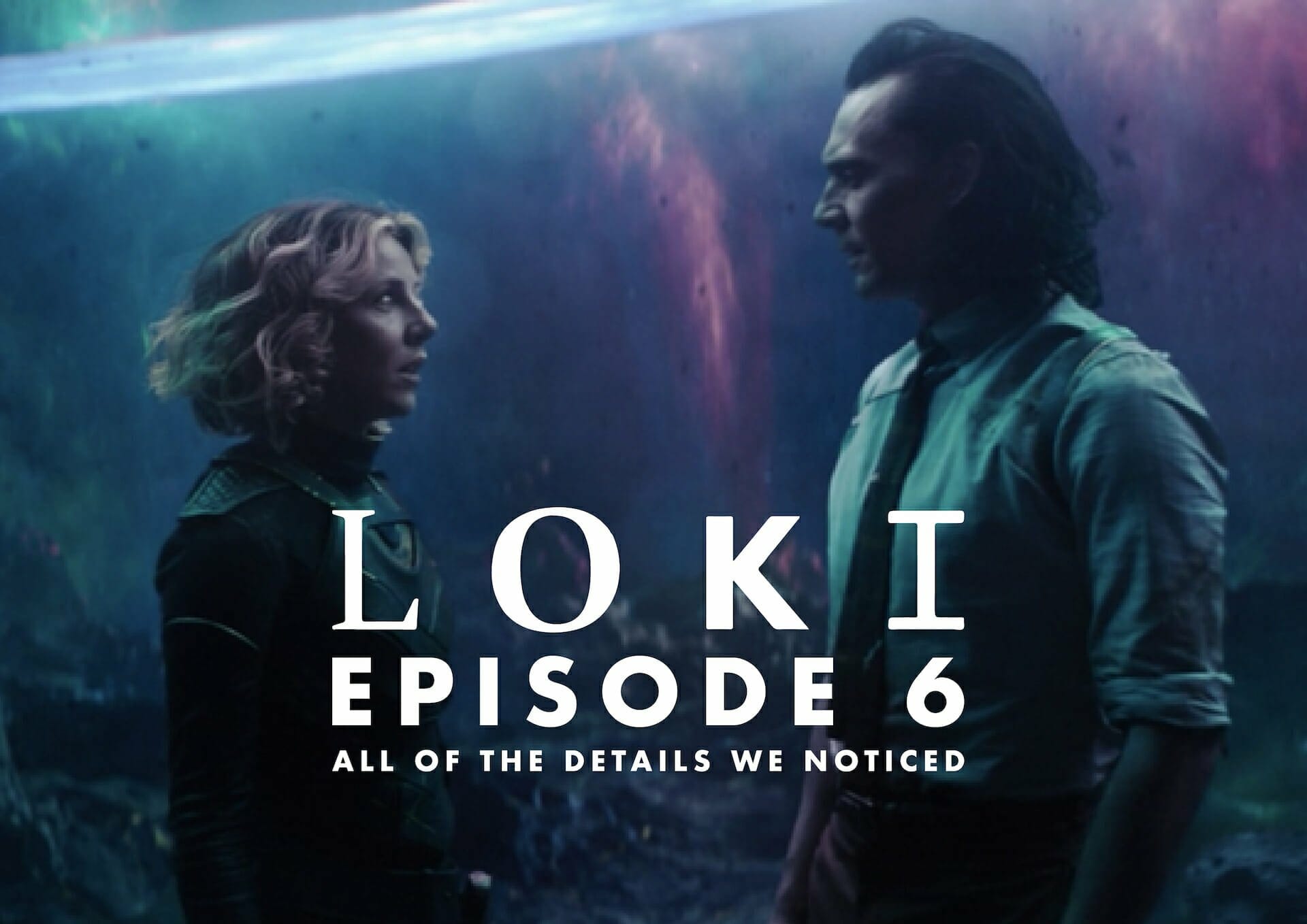 Loki has been a series rich in detail, packed full of comics and real-world references, but it managed to save some of its very best for last. The series finale, titled “For All Time. Always,” brings Loki and Sylvie face-to-face with the puppet-master behind the TVA; there’s a lot to take in right from the very first second, but don’t worry if you didn’t catch them all, we got you.

As always, and for the final time, this is your spoiler warning for episode 6 of Loki and the broader MCU. If you haven’t yet seen the episode, bookmark this post and return to it once you have.

It’s been a long, long time.

The very first second of the episode features an incredible little Easter egg. The familiar ‘Marvel Studios’ title sequence has been updated to feature new audio, starting with the Harry James & Helen Forrest song “Its Been a Long, Long Time.” You’ll know the song, most famous for being the song Steve Rogers and Peggy Carter danced to in the final scene of Avengers: Endgame, fitting that the finale of a show about time would feature the song most associated with the MCU’s favourite time criminal. 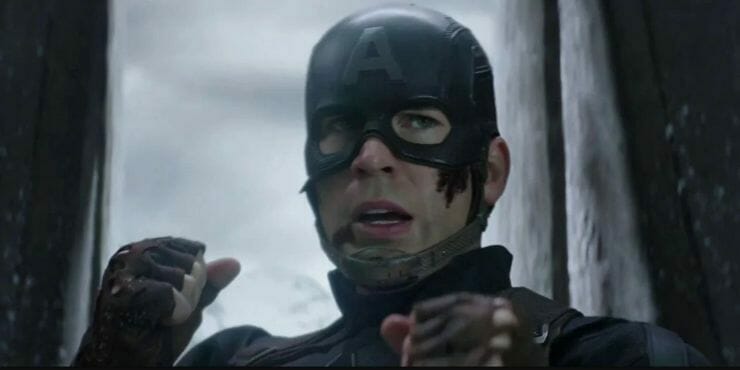 During the same Marvel Studios opening, iconic lines from MCU movies and shows can be heard. Cues such as T’Challa’s famous battle cry: ‘Wakanda Forever!” And Vision’s line about grief and love from WandaVision. There are so many more lines from every corner of the MCU, and it’s worth rewatching to see what you can pick out.

Along with the MCU lines, the opening also features famous quotes from some real-world heroes. I managed to pick out some: philosopher Alan Watts, Neil Armstrong, Greta Thunberg, Malala Yousafzai, Nelson Mandela and Maya Angelou. An excellent way to mix real-life heroes with MCU heroes.

In the opening (yes, I’m going to milk it), during Neil Armstrong’s quote, if you look closely, you can see the Quinjet that Natasha, Clint and the rest of the team travelled into space on at the start of Avengers: Endgame.

While Loki and Sylvie climb the steps to the door of the Citadel, there are two hourglasses on either side of the door. I’m not entirely sure if or what they mean, but they look pretty significant.

The Lokis are welcomed by Miss Minutes, who calls the place beyond The Void “the Citadel at the End of Time,” taken directly from the comics. It first appeared in Thor Issue #245 when Thor and Jane travel there. As we mentioned last week, Kang also has a citadel called Chronoplois located at the end of time.

In the same Thor comic, Jane talks to He Who Remains – that’s who Miss Minutes says lives in the Citadel. In the comics, the TVA was created by He Who Remains, an all-powerful being who hoped not to repeat his past mistakes. 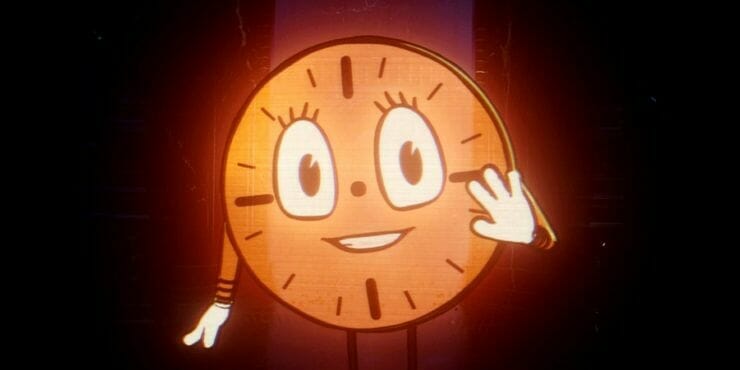 Miss Minutes tries to entice Loki by mentioning some of his failed plans that he could be successful at with the help of He Who Remains. She says the Battle of New York from The Avengers and even mentions Loki becoming the King of Asgard, which he tried to accomplish is Thor. She goes on to offer him the ability to kill Thanos and take the Infinity Gauntlet. Miss Minutes reminds me of Hall 9000 from Stanley Kubrick’s 2001: A Space Odyssey.

As the Lokis walk through the Citadel, the camera tilts as they walk down the hallway. This camera work is similar to shots in Thor, as we pointed out last week. It also feels like a shot from Doctor Strange, when Stephen Strange and Mordo fight Kaecilius. 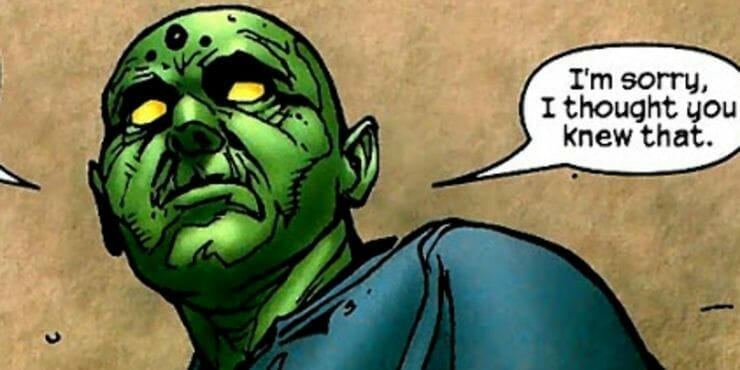 There are four statues in the room that the Lokis end up in; three represent the Time Keepers, the fourth statue is broken. In the comics, He Who Remains created four Time Keepers, but he exiled one of them, the Oracle of Siwa. 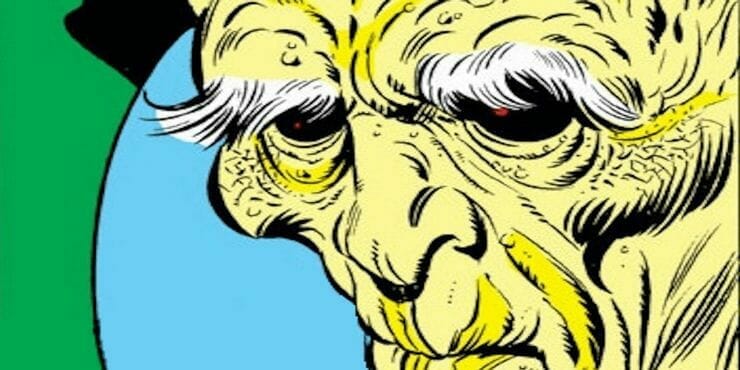 As the lift opens, we see Jonathan Majors; he appears here as He Who Remains, who happens to be a variant of Kang the Conqueror, the Avengers villain that Majors has been cast to play in the upcoming third Ant-Man film. Confused? Well, it seems that Marvel Studios have just combined two characters by making He Who Remains a Kang variant. This makes sense, given that in the comics, Kang has several different identities throughout various timelines. 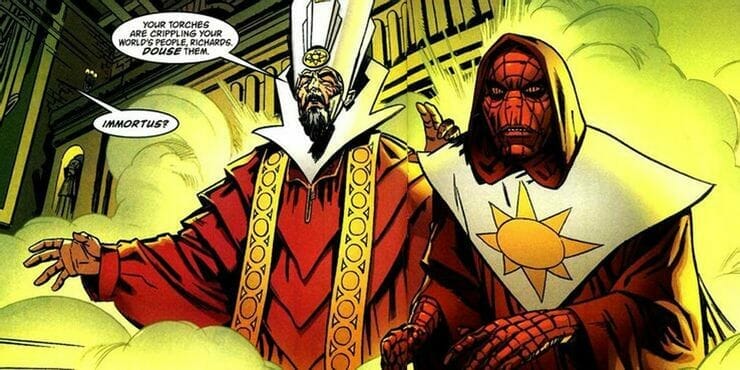 In the comics, Kang is more fearful than Thanos. He comprises dozens of identities from various timelines, including Nathaniel Richards, Immortus, Rama-Tut and Iron Lad. Get used to him because he will be heavily featured in Phases 4, 5 and beyond. 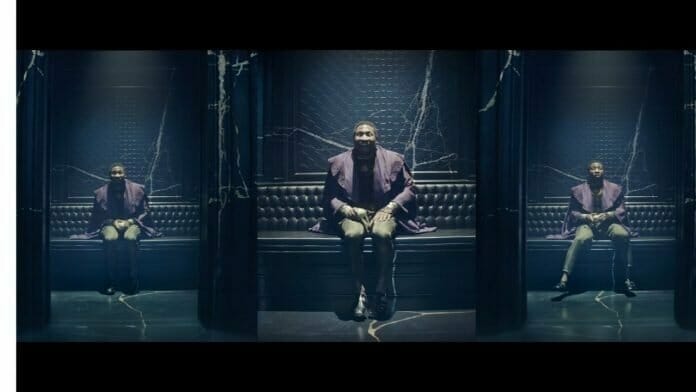 The outfit He Who Remains is seen wearing is similar to many Kang variants in the comic books. Purple and green are his signature colours, and Immortus, one of his many identities, wears a similar gold symbol on his chest.

We finally get closure on Mobius’s pen, which is good because I’ve been talking about it for weeks, not knowing its significance. We find out that Ravonna is a variant from Ohio in 2018 and teaches at Franklin D. Roosevelt High School. She has a whole pot of pens on her desk, and a portrait of the American President can be seen on the corridor wall. Could it be that Ravonna knew where she’d come from all along and kept popping back to stock up her stationery cupboard? 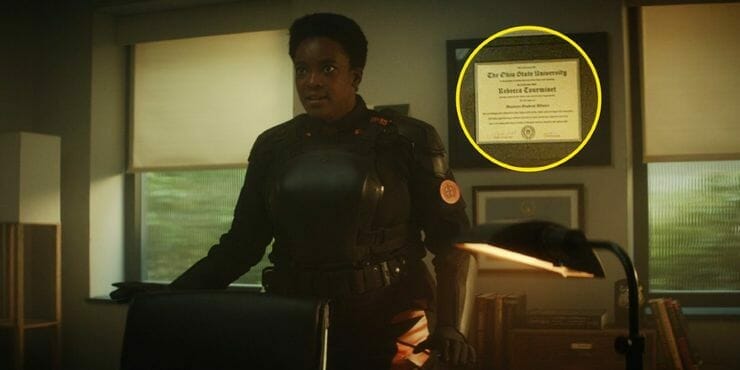 Ravonna’s real name can be spotted on her University diploma. Her real name is Rebecca Tourminet, which is the name that Ravonna used in the comics while trying to hide from Kang.

When He Who Remains shows the Lokis all of their printed dialogue, you can see that He Who Remains’ lines are listed as “Me,” while Loki’s list his as his Variant Identification number “L1130.”

He Who Remains tells the Lokis that he has been “dubbed many names by many people, A ruler, a conquerer.” This is a subtle way to hint that he is Kang the Conqueror, who also has many different names. 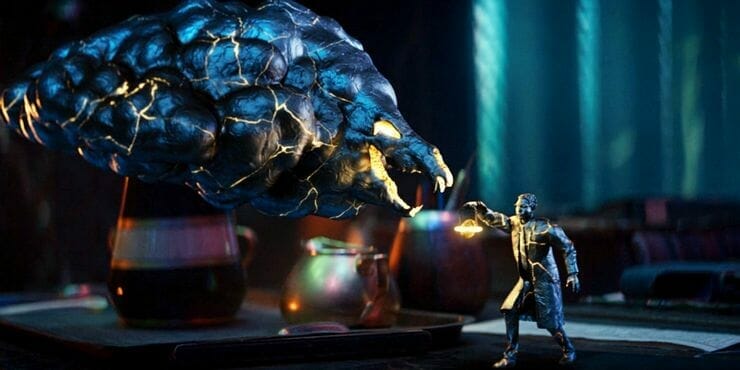 He Who Remains tells a story about how his variants helped each other before they started a multiversal war. This is a reference to the comics, where the Council of Kangs was a group made up of Kangs who looked to eliminate any Kangs that diverged from the right path.

You two run the thing.

He Who Remains tries to entice the Lokis into taking overruling the timeline; throughout the conversation, he’s seen eating an apple. This is biblical symbolism, with Adam, Eve, the apple and the snake. Apples often symbolise forbidden fruit in religion and mythology. 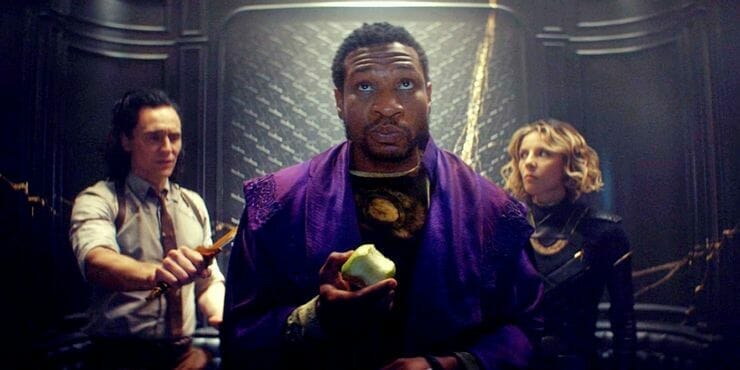 The conversation between the Lokis and He Who Remains parallels the scene in The Matrix Reloaded, where Neo meets The Architect and has many expositions dumped on him.

I can’t hold off any longer, but we have now officially entered the multiverse in the MCU. This will directly influence Spider-Man: No Way Home and Doctor Strange in the Multiverse of Madness. Strange will have a busy old time, what with Loki creating the multiverse and Wanda warping reality. There are, of course, comics that feature Doctor Strange, Wanda and Loki fighting side-by-side. It’s fascinating stuff.

As Sylvie kills He Who Remains, we see the sacred timeline splitting. He Who Remains warns of this happening, along with an infinite amount of his variants appearing, we can assume that it will be an evil variant that we get as the villain of Ant-Man 3. 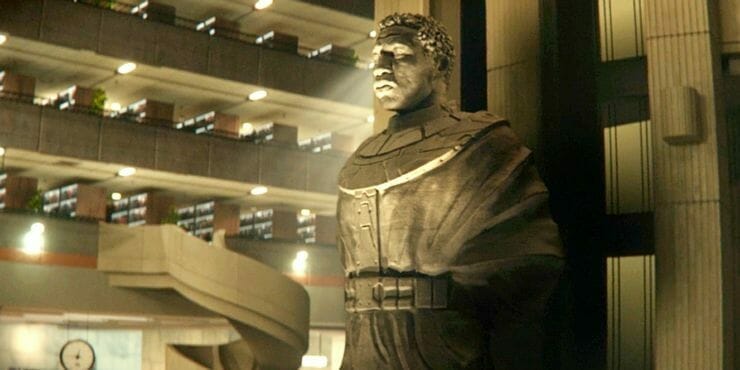 When Loki returns to the TVA, Mobius and Hunter B-15, don’t remember who he is. We can assume that is because he has landed on another timeline, one where he never met Mobius.

Planet of the Apes vibes 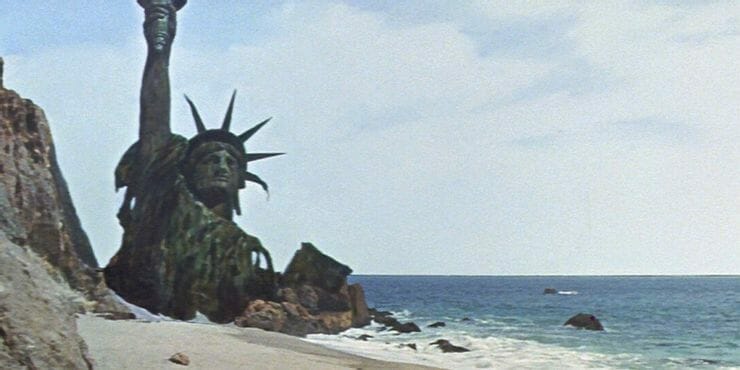 As Loki looks out at the TVA, instead of three statues of the Time Keepers, there is just one statue that looks just like Kang’s comic book look, minus the mask. This whole sequence is lifted straight from the ending of Planet of the Apes. When Charlton Heston’s character finds half of a rundown Statue of Liberty on the beach, he realises that he isn’t on a planet inhabited by intelligent apes but rather a conquered version of Earth in the future. Loki’s ending also has a lot in common with Tim Burton’s remake of Planet of the Apes, ending with Mark Wahlberg travelling back to Earth and stumbling on an ape version of the Lincoln Memorial in Washington DC.

So there you have it, that’s every detail we noticed in the season finale of Loki; if you’re new here, we’ve covered each episode in the same way, and you can catch up on the whole series worth of detail HERE.