Skip to content
Home » Blog » Loki Episode 1: All of the Easter Eggs and References We Noticed 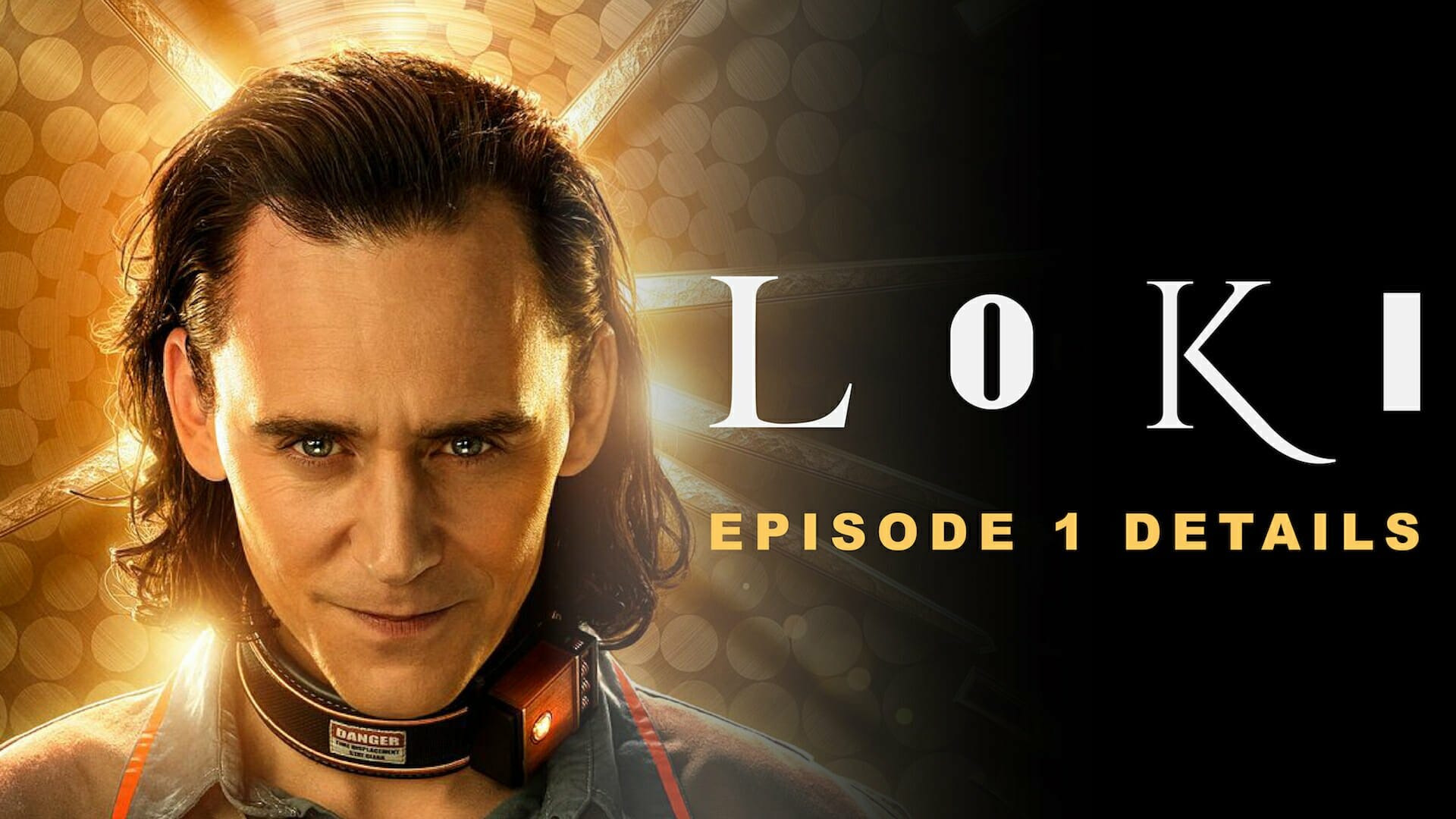 Marvel Studios’ Loki has finally arrived on Disney+ and just like WandaVision and The Falcon and the Winter Soldier that came before; it is packed full of details, Easter eggs and obscure comics references. Don’t worry if you missed anything, though; we’ve got you! As we’ve done previously, we’ll be here every week to bring you all of the details we noticed.

Before we get into it, spoilers ahead for Loki Episode 1 and the wider MCU.

Give Hulk a wave

First up, we get a recap of the events after the battle of New York from Avengers: Assemble / Endgame that leads to Loki escaping with the Tesseract. While most of the scene is the same, the zoomed-in shot on Loki waving goodbye to Hulk is new.

Landing in the desert 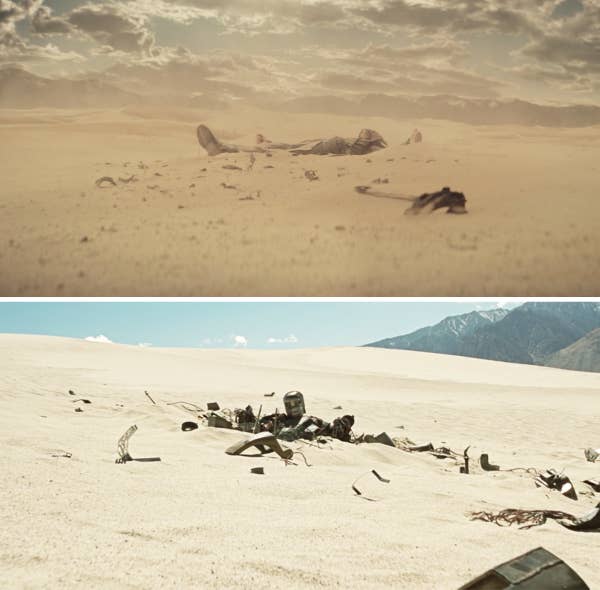 When Loki crashes in the Mongolian desert, it looks just like when Tony Stark crashed in the desert after escaping capture in Ironman. 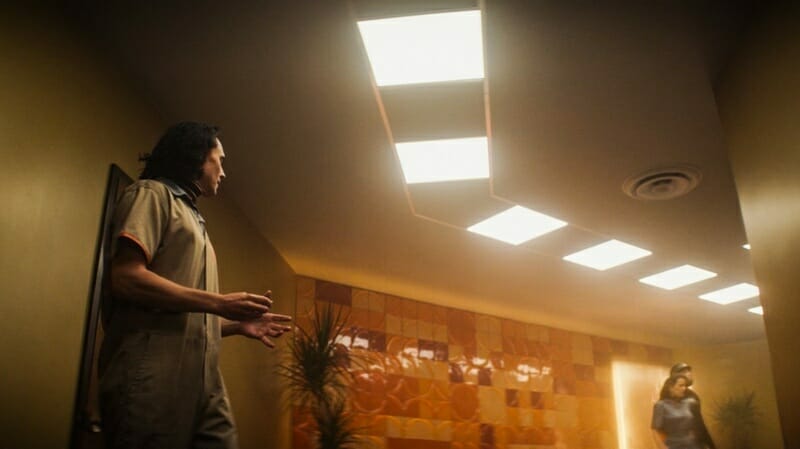 When Loki is brought to the Time Variance Authority, a Skull prisoner is standing at the desk, this was also seen in the trailer. Later on, another prisoner can be seen being walked through the TVA, although appearing very briefly and somewhat blurred, looks suspiciously like Peggy Carter.

If you look closely at the paperwork given to Loki to sign, you can see his Variant identification number is “L1130” Whilst I don’t know of any significance in the number, this Loki being number 1130 could mean that out there somewhere, there’s a lot more Lokis.

Loki’s arrival at the TVA is a fun parallel to Thor arriving on Sakaar in Thor: Ragnarok. Just like Thor, Loki is a confused prisoner in a strange new place, being given an induction via a strange retro voice over. Things then become very real when a fellow prisoner is seen being horribly vaporised. 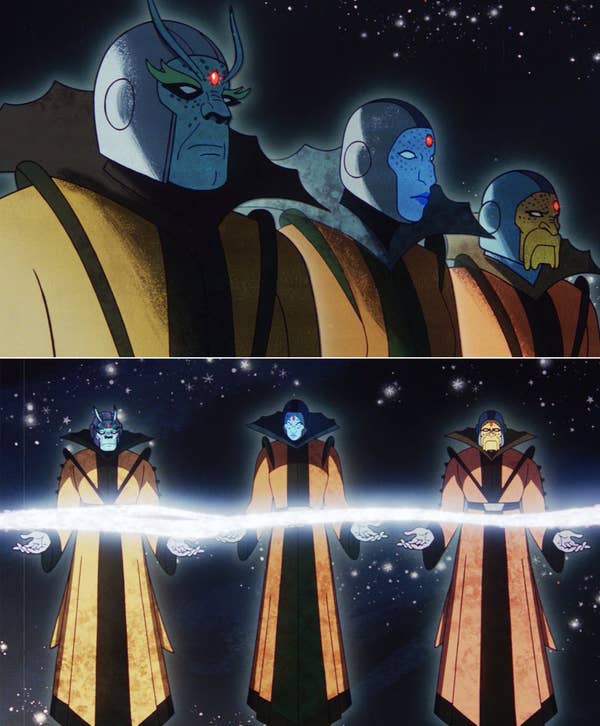 While being processed at the TVA, Loki is shown an animation narrated by Miss Minutes. The video introduces the Time Keepers; the one in the middle clearly looks like Kang the Conquerer, who is confirmed to appear in Antman 3.

The animation also mentions that when you step off your destined time path, it creates a “Nexus Event” Nexus was previously featured during the commercial in WandaVision episode 7. In the comics, the Nexus of all realities is a gateway that can be used to access all possible realities. Wanda is also known as a Nexus Being, something that the TVA watch very closely.

During the same animated sequence, the video mentions that things could branch off into “madness” for the multiverse if a Nexus event is left unchecked. Is it just a coincidence that Doctor Strange 2 is titled “Multiverse of Madness”? Almost definitely not.

In 1549, Agent Mobius was handed a gum packet left behind by the variant he’s chasing. There isn’t a Marvel Easter egg here per se, but the gum does feel like a nod to comic books. Back in the day, comics would always have an advert page for novelty gifts like whoopee cushions, X-ray glasses and gum that turned the unsuspecting recipient’s mouth blue or black. It’s possible that Loki, the god of mischief, gave the poor French kid some novelty gum, leaving his mouth blue.

The fact that the gum is blue and turns the boy’s mouth the same colour could also reference Loki himself, who we know was blue when Odin rescued him. Being the son of a frost giant, we later see Loki turn back to his blue form when Thanos kills him; this was also the first time in the MCU that Loki referred to himself as the “rightful king of jotunheim” Could the bubblegum be a calling card left behind by a variant Loki who ended up claiming his place as the king of the frost giants? Or could it be possible that the child is Loki? There have been rumours that Kid-Loki might appear in the series.

As seen in the most recent trailer, Loki’s sex is listed on his TVA file as ‘fluid’. This goes way back to Norse mythology and is seen throughout Marvel comics, where Loki regularly changes gender. Odin even referred to Loki as both his son and daughter.

Another link to Kang

Gugbu Mbatha-raw makes her MCU debut as Judge Renslayer. In the comics, Ravonna Renslayer falls in love with Kang the Conqueror, who has links to the Timekeepers. Kang is set to be introduced in Ant-Man and the Wasp: Quantumania, played by Jonathan Majors.

As Loki looks out at the TVA, a futuristic, sprawling metropolis, look closely, and you can see “T-282” on one of the buildings. Possible Marvel connection? Well, issue #282 of Thor happens to feature the first appearance of the Time Keepers.

Mobius is seen using holoprojector 35 to show Loki his past exploits. “Journey Into Mystery #35 tells the story of a man who is transported through time. The comic series also laid the groundwork for “The Mighty Thor” comics. The highlight reel shows Loki’s life through various points in time.

The film used to show Loki his ‘greatest hits’ is labelled with “ETH-616” which we can assume is a reference to Earth-616, the main Earth in Marvel comics.

When Loki sits down with Agent Mobius for the first time, Owen Wilson’s character can be seen drinking a can of soft drink. Upon closer look, the drink is “Josta”. One of the first energy drinks, Josta, was only briefly available in the mid to late ’90s. There’s no Marvel reference here, but it’s possibly something that head writer Michael Waldron has added as a fun reference to the past. Waldron, who previously wrote for Rick and Morty, has to form in adding now-defunct products to TV shows. He famously created a frenzy around McDonald’s Szechuan Sauce, another 90’s relic, when he included it in an episode of the show.

Probably one of my favourite details is the D.B. Cooper scene. First seen in the trailer, it appeared that this sequence, which saw Loki jump from a plane with a briefcase full of cash, would be a key moment in the series. But it turned out to be just another one of Loki’s ‘moments for mischief’ shown to him by Mobius and dismissed as nothing more than a bet between him and Thor. It’s cool that Loki is D.B. Cooper in the MCU, and it makes me wonder what other moments in history Loki had a hand in…

If you’re unfamiliar with the story, D.B. Cooper was a well dressed and polite man known as “Dan Cooper” who hijacked a plane flying between Portland and Seattle on Nov 24, 1971. After informing a flight attendant that he was carrying a bomb, his demands of $200,000 (over $1million in today’s money) were met, and he parachuted from the plane, never to be seen again. The case was never solved and still remains a mystery today.

The devise Mobius and the TVA use to move Loki back in time when he tries to make a move on them is called a “Time Twister.” In the comics, the Time Twisters are creatures that the TVA created in order to go forward in time. 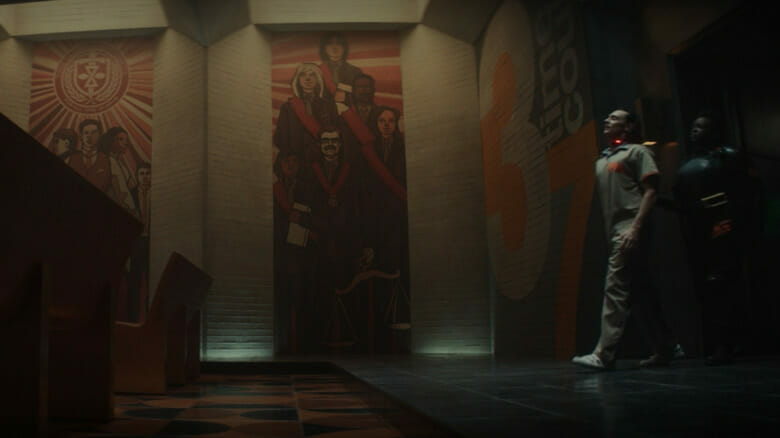 As Loki is taken into the courtroom, we see that the walls feature murals of what looks like TVA employees. One of the portraits appears to be a young Stan Lee, nothing has been confirmed, but it does seem to feature his signature tinted glasses, moustache and smile. 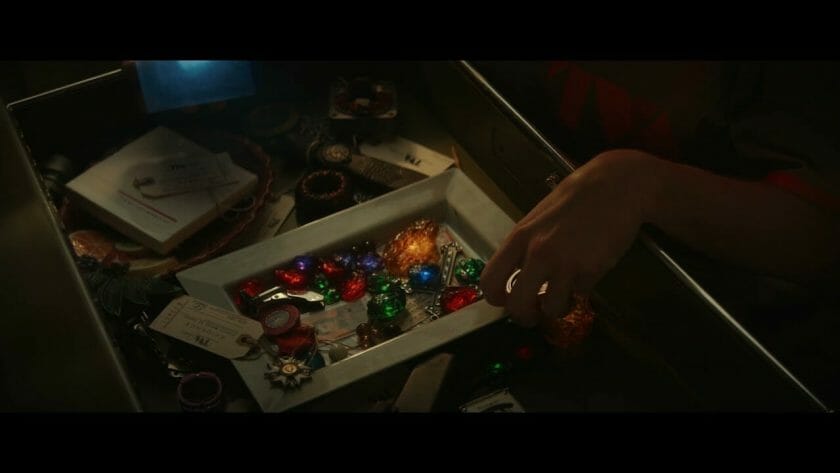 One of the most significant details in the episode is that Casey had a drawer full of Infinity stones. Up until this point, the stones were the most powerful things in the Marvel Cinematic Universe, used by Thanos to ‘snap’ half of the galaxy out of existence. After collecting and using the stones, Thanos reduced them to atoms, and the Avengers had to time travel to collect a set and undo what Thanos had done. The fact that more than one set still exists suggests that the TVA have confiscated them from other people who have misused the timeline. What may also be a significant detail is that multiples of 5 of the stones can be seen except for the soul stone that isn’t there at all…

Having the stones powerless inside the TVA follows the rules of how they work in the comics. In Secret Wars, Dr Strange attempted to use a set of stones that he had collected to take down Dr Doom. However, they only worked inside their home reality, so if you take them out of their reality, their powers stop working at the border.

Seeing the stones just chilling, powerless is a moment that makes Loki realise just how insignificant and futile his life has been in comparison with everything that exists beyond the universe he knows. This also signifies how the MCU is expanding beyond the reality and galaxy we’ve seen so far; BIG things are coming.

There is also some other items of interest in the drawer, a medallion, a cross and what looks like a dagger. A hint that Dracula is coming to the MCU with Blade? Just gonna stretch out for that one…

There is also a T206 Honus Wagner baseball card, which for many years was the most valuable baseball card ever, I can’t think of anything linking it to Marvel, but yes, I am a massive nerd for sports cards.

The TVA track the other Loki Variant to Oklahoma. In the comics, Oklahoma is a big part of Thor’s story as it is where New Asgard is located after Ragnarok.

The TVA Minutemen find a weapon from the “early third millennium”, this is significant because in the comics, Kang the Conqueror comes from that era.

Did you catch any important details or references in episode 1 of Loki? Let us know in the comments!