Skip to content
Home » Blog » Loki Episode 4: All of the Easter Eggs and References We Noticed 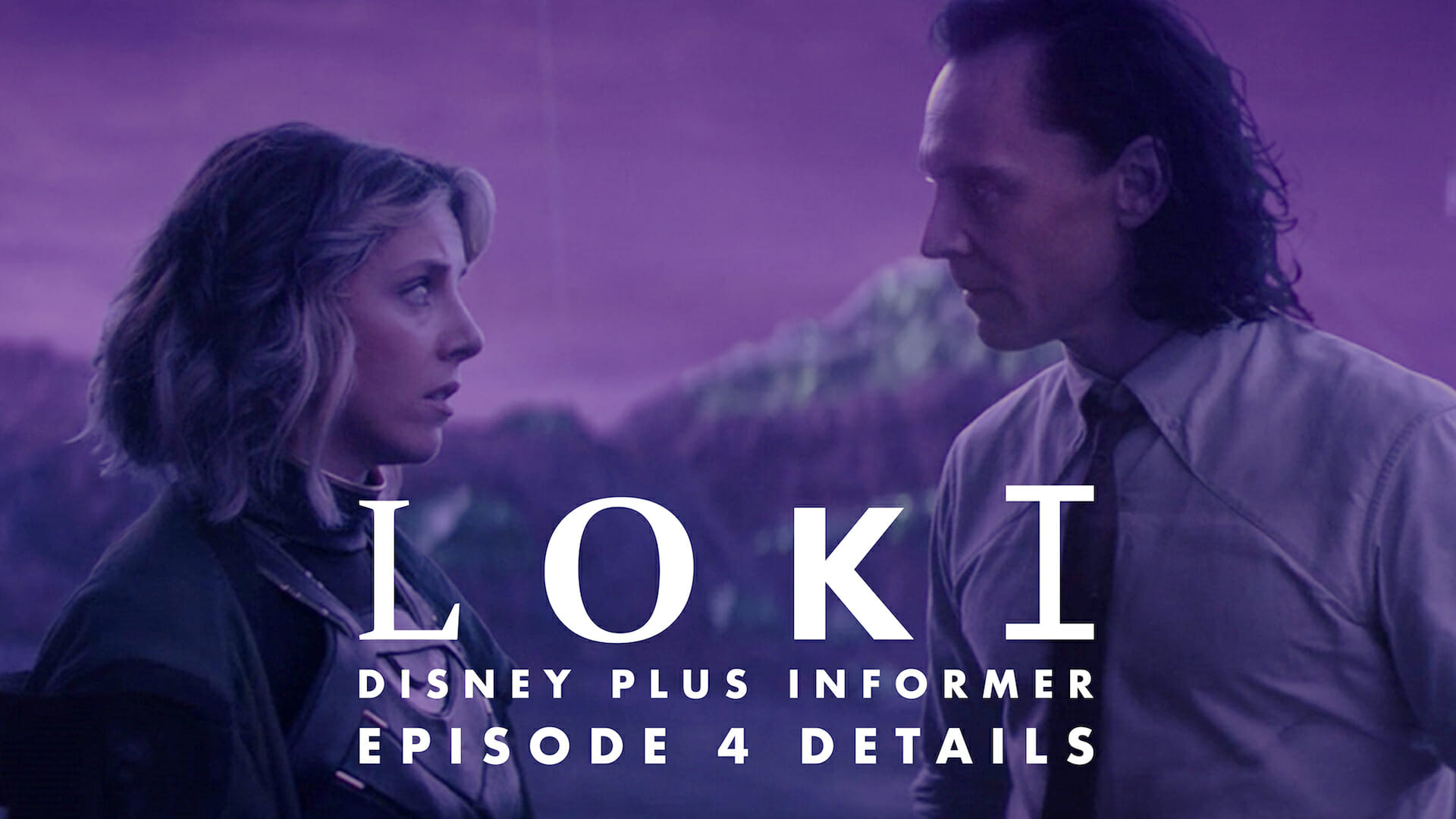 Episode 4 of Loki covered a lot of ground. Questions were answered, revelations made, variants were pruned, and plots were twisted. As we’ve come to expect, there were many details and references, some more obvious than others; here are some of the details we noticed in Episode 4 of Loki.

As always, this is your spoiler warning for episode 4 of Loki and the wider MCU. If you haven’t yet seen the episode, bookmark this post and return once you have..

The episode opens in Asgard, with a wide shot showing Loki & Thor’s home in all its beauty. I noticed, and I went back and checked, that every time we see Asgard for the first time during the 3 Thor movies, it is from the viewpoint of the Rainbow Bridge, moving in towards the palaces and mountains. However, in Loki, this shot is from the opposite perspective, looking towards the Rainbow Bridge behind the mountains. This could be a coincidence, or it could be deliberate in highlighting that this is an alternate version of Asgard.

On Asgard, we find a young Sylvie playing with some toys. She flies a Valkyrie on a pegasus into battle with a dragon just like the one from Thor: Ragnarok. Alongside her is a Viking longboat and a Fenris, the giant wolf Hela rode. Playtime doesn’t last long, though, as the TVA turn up to take her away. Ravonna Renslayer is the one who shows up, back when she was known as Hunter A-23.

While the TVA are searching the Sacred Timeline for the two missing Lokis, we see some interesting dates and locations being monitored. These include Wrightsville, Pennsylvania, 1832. I looked this up, and it turns out that specific location and date was home to the world’s longest bridge, which was destroyed by a storm. Answers on a postcard if you know how that fits into the story. We also see Morag, the place that housed the Power Stone in Guardians of The Galaxy; it seems that it too suffered a climate catastrophe. Also mentioned is Sakar, the junkyard planet from Thor: Ragnarok, Alberta, Canada, the birth palace of Wolverine and home to the Weapon X facility. 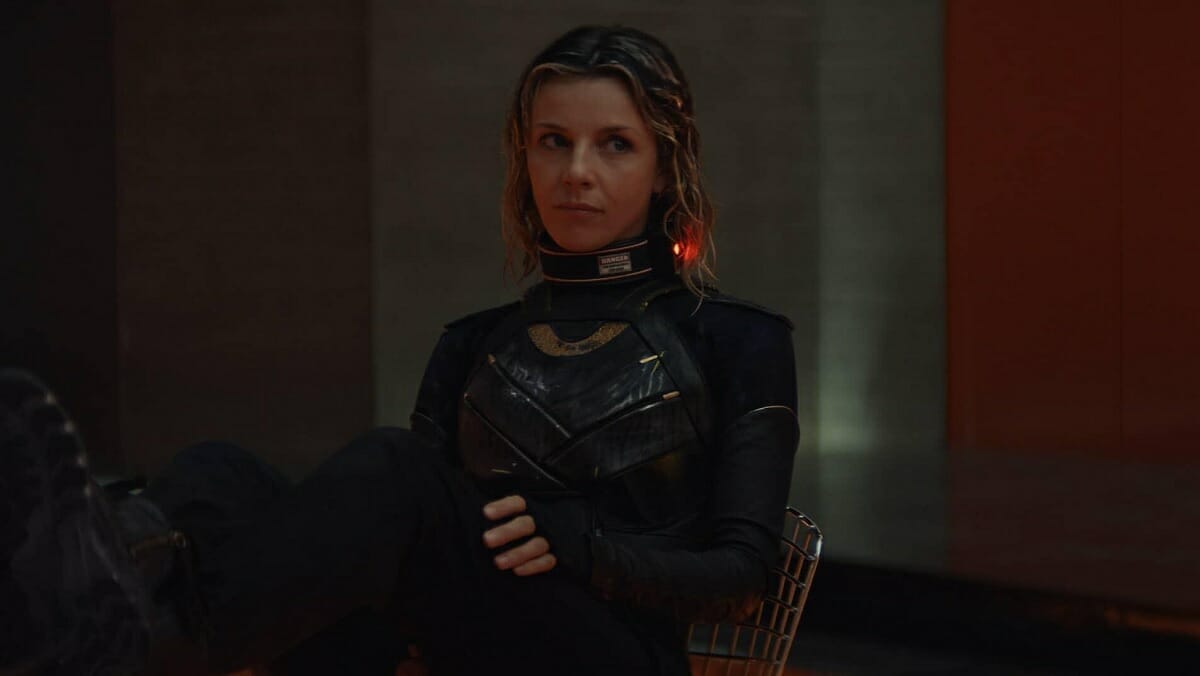 Loki and Sylvie share a tender moment as they both wait for the world to end on Lamentis -1. The moment is massive enough to cause a spike in the timeline that leads the TVA straight to their location. It’s a big Nexus event, and more than likely, the one the episode title refers to. Mobius notices it and points it out to Loki later on, as he laughs at the level of narcissism it would take to fall in love with yourself.

When Loki is returned to the TVA, instead of putting him in a holding cell, Mobius sends him to a time loop. The specific moment is one of great physical pain for Loki and contains a fun cameo from the Thor films. An angry Lady Sif comes storming through the doorway to confront Loki about a cruel prank he played on her; it seems that Loki thought it would be fun to cut off Sif’s hair. She slaps him, then knees him where it hurts, leaving him rolling on the floor in plain. She goes, then enters again and repeats; such is the nature of a time loop.

This detail is directly from the Norse Mythology and Marvel comics. At one point, Sif was married to Thor. As a prank, Loki cut off all of her hair, which eventually led to the creation of Odin’s famous spear, Gungnir and Thor’s hammer, Mjölnir. 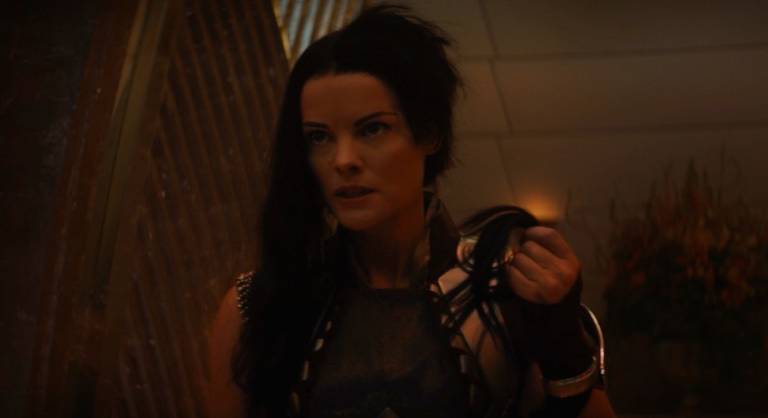 When Mobius signs the paperwork in Ravonna’s office, he glances down at the Franklin D. Roosevelt Hight School pen again. I’ve got nothing on this other than he’s made a thing of it twice now so it could be something to do with his past.

Hunter A-23 is a reference to Ravonna’s first comics appearance in Avengers #23.

Loki is taken to Time Theatre 25. Journey Into Mystery Issue #25 features a storyline about a man having his memory erased by aliens.

Sylvie is held in Time Theatre 47, which could be related to a couple of comics. What If #47 is titled: “What If Loki Had Found Thor’s Hammer First?” And Thor #47 is a story about a variant female Thor with the powers of Enchantress.

Mobius name drops some of the races he has processed, which include Kree, Titans and Vampires. We know that the Kree are the warrior race that included Ronan the Accuser, and Titans are the people of Thanos’ home planet, Titan. Vampires are set to make their first appearance in the MCU in Mahershala Ali’s Blade. In the Marvel Universe, vampires are created by black magic from The Darkhold, the book we saw in WandaVision. 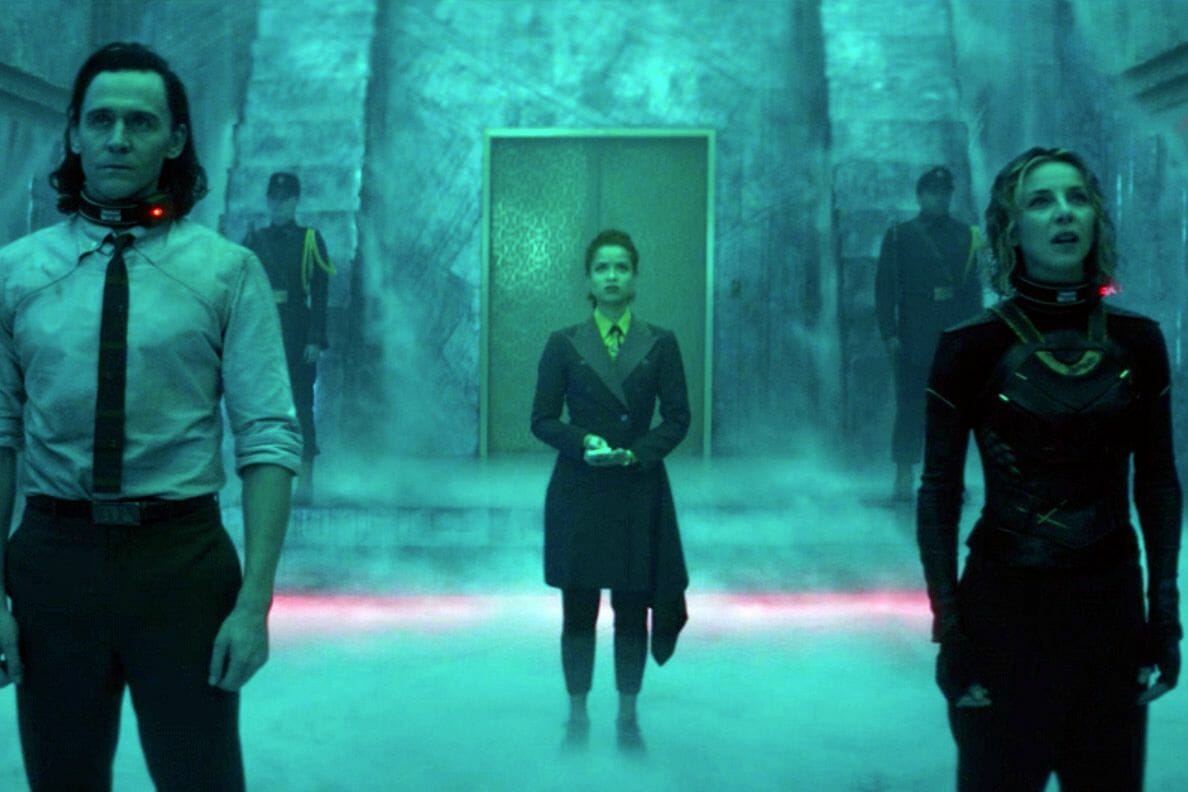 When we finally meet the Time Keepers, their looks are comics accurate, something Marvel seems to be working into each project as much as possible.

The Wizard of Oz

Ravonna stabs Loki in the back, killing him; it is the same way Loki kills Coulson in The Avengers.

Mid credits are back

In the series’ first mid-credits scene, we find Loki waking up wondering if he’s in Hel – The subtitles confirmed hel with one L, so this is a reference to the realm that was ruled by Loki’s older sister, Hela. As Loki asks if he’s dead, the distinctive voice that answers him was that of Richard E Grant. The scene then cuts to reveal that our Loki is being stared down by four new Loki variants. But who or what do they represent?

Grant is seen as ‘Classic Loki,’ wearing his classic yellow and green costume drawn by Jack Kirby. It looks exactly like the one seen in his first appearance in Journey into Mystery #85. We can assume this Loki is from the 616 universe, which is the main universe in the Marvel comics.

Jack Veal appears as Kid Loki, who first appeared in Thor #617, in which Loki died fighting alongside Thor and the Avengers; it was one of his rare moments of heroism. Before his death, Loki tricked Hela into removing his name from the Book of Hel. This meant that after his death, he was reborn as a much younger version of himself. For the most part, this version of Loki was good, and they became a member of the Young Avengers.

Kid Loki is seen holding what looks like an alligator, but look closely, and you can see it is wearing Loki horns, meaning this is another Loki variant. This may seem odd, even for Loki, but he has a history of transforming into animals. He famously became a female horse in Norse Mythology, so perhaps there was a time when Loki transformed into an alligator and got stuck. Gator Loki is could also be a nod to the time he famously turned Thor into a frog.

Finally, on the far left is Deobai Oparei, listed in the credits as “Boastful Loki” He is seen holding what looks like a variant of Thor’s hammer, Mjölnir. Although there is no Boastful Loki in the comics, there is a storyline where Mjölnir ends up in Jotunheim, which is ruled by Loki, who briefly lifts his brother’s hammer.

In the scene’s background with the 4 Loki variants, we can see a derelict Avengers tower.

After the post-credits scene, the song is “I’ll Take That Drink Now” by Alan Silvestri, which is from when the Avengers apprehended Loki in The Avengers. Loki’s POV is also identical to his one during the same scene in The Avengers, with the Loki’s / Avengers staring down at him. 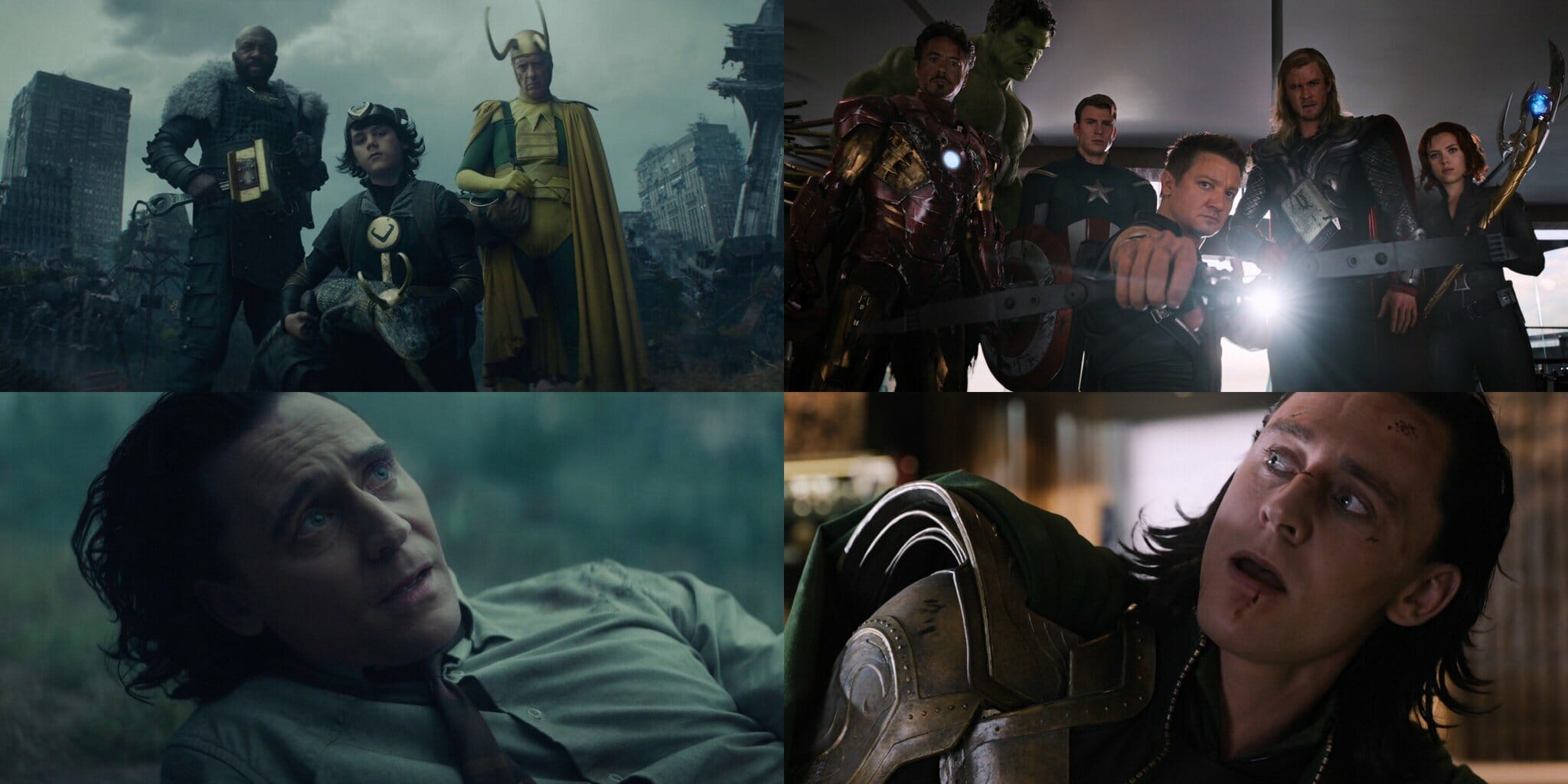 So, thats everything that we spotted in episode 4 of Loki, is there anything we missed?