Skip to content
Home » Blog » Man in the Arena: Tom Brady to Debut on ESPN+ November 16 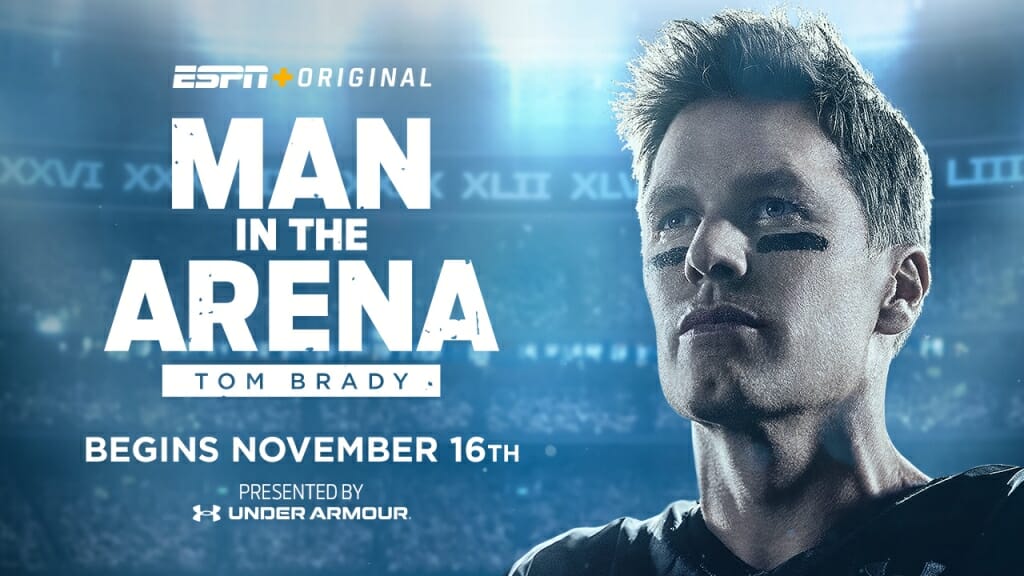 Tom Brady shares a first-hand account of his Super Bowl appearances in the new ESPN+ series Man in the Arena: Tom Brady, debuting on November 16. Directed by Religion of Sports’ Gotham Chopra, the series features Brady and other notable figures deconstructing the milestones of his legendary NFL career, mining the psychological and emotional terrain of each victory and defeat. The first episode will be available to ESPN+ subscribers next Tuesday, with new episodes posting weekly on Tuesdays. Each weekly debut will include a special presentation of the episode at 9 p.m. ET, followed by the post-show Inside the Arena. Trailer: https://youtu.be/DmeH2ZhqUZc

“Man in the Arena is more than a series of career highlights compiled together,” said Brady. “This series shows what an incredible journey it has been for me these past 22 years and the incredible people that have impacted me on this amazing ride. It is an inside look into how this journey has helped shape me into the man I am today.”

Each episode focuses on a single Super Bowl appearance, beginning with Super Bowl XXXVI, the season Brady took over as quarterback for the New England Patriots after star quarterback Drew Bledsoe suffered an injury. The episodes depict not just the pivotal moments, but everything that leads to them, illustrating the series of small steps that seem insignificant at the time, but when reflected upon, show the distance traveled. The docuseries is co-produced by ESPN, 199 Productions, Gotham Chopra for Religion of Sports, and NFL Films.

“Tom Brady has been a dominant force in the NFL, and in the broader culture, for two decades now. No player in recent memory has been more analyzed or debated, more beloved or reviled,” said director Gotham Chopra. “Man in the Arena is an examination of his impact on and off the field, and I’m eager for that discussion to continue around the series.”

Added Brian Lockhart, senior vice president, ESPN+ Original Content and ESPN Films: “Tom Brady went from being selected 199th overall in the 2000 NFL Draft to leading one of the greatest dynasties in sports, and he still isn’t done. That’s just the kind of story we love to tell: one that’s epic and sweeping on one hand, and human and complex on the other. That combination of big stars and teams, new reporting, and nuanced drama is what we do best at ESPN, and we know our fans will appreciate a look inside as Man in the Arena unfolds every week on ESPN+.”

Companion programming for the series will include Inside the Arena, a post-show that will air live on ESPN+ following the playout of each episode of Man in the Arena, hosted by Tedy Bruschi and Field Yates and After the Arena, hosted by Shae Cornette, Jason Fitz, and Skubie Mageza, which will stream to the ESPN App and ESPN’s Facebook, Twitter, and YouTube handles on the Wednesday evenings after each episode is released. Additionally, the “Man in the Arena” podcast series, hosted by Gotham Chopra, looks at Brady’s career and the myriad, universal ways that sports enrich and connect our world. The series, produced by the Emmy Award-winning sports media company Religion of Sports, will debut on Tuesday, November 16 and will be available as an ESPN Podcast on Apple Podcasts, Spotify and wherever podcasts are available.