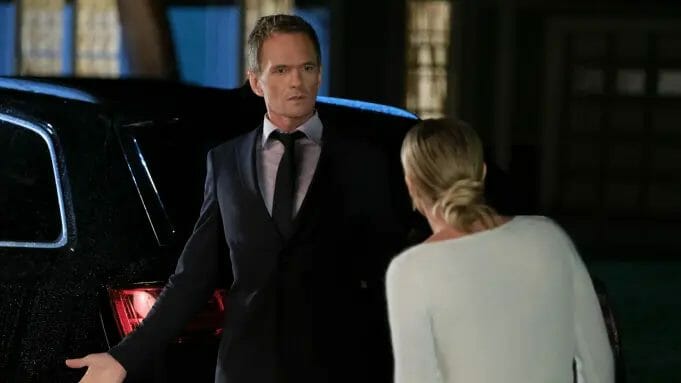 Season 2 of “How I Met Your Father” just launched today on Hulu in the United States and on Disney+ in Canada and Australia.  Fans were treated to a nice surprise as Neil Patrick Harris reprised his role of Barney Stinson from the original series, “How I Met Your Mother.”  Deadline reports that it appears he will play a pivotal role in the spinoff series.

According to Deadline, in the final beats of the episode titled “Cool and Chill,” the timeline shifts to a year after the events earlier in the episode. Sophie leaves her mom Lori (Paget Brewster) a hysterical voicemail saying she thinks she is dating her father before suddenly crashing into a luxury SUV. When the driver’s side door opens, the victim is revealed to be Barney. He shrugs and tells Sophie, “Dude!” just as the bumper falls off the Audi onto the sidewalk.

Harris played Barney for nine seasons of “How I Met Your Mother” and was a fan-favorite character.  In a recent interview with TVLine, series creators Isaac Aptaker and Elizabeth Berger revealed Barney will be back for more episodes however did not provide any details on the extent of his role.  They did confirm he is not Sophie’s father.

In “How I Met Your Father,” Hilary Duff stars as Sophie, who is telling her son the story of how she met his father, much like Josh Radnor (and Bob Saget’s) Ted Mosby did in the original series. The story starts in 2021 where Sophie and her close-knit group of friends are in the midst of figuring out who they are, what they want out of life, and how to fall in love in the age of dating apps and limitless options.

Season 2 will also be coming to Disney+ in the United Kingdom and Ireland however a release date has not been announced yet.

Season 1 of the series which consists of 10 episodes is streaming now on Hulu in the United States and on Disney+ in many countries including Canada, The United Kingdom, Ireland, and more.