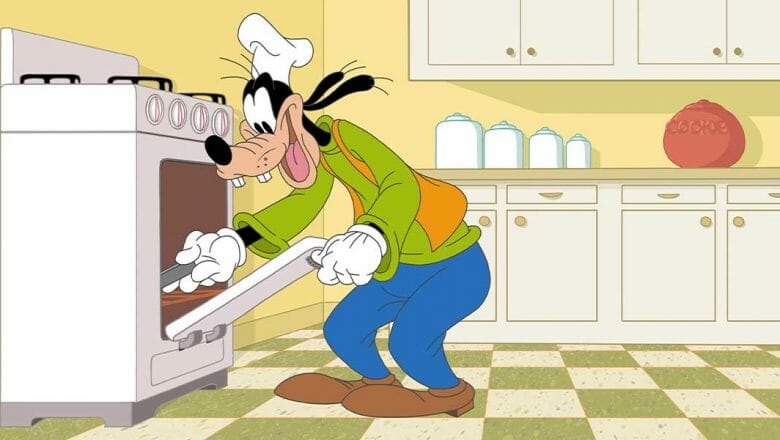 Walt Disney Animation Studios will release three new Goofy How to Stay at Home shorts which will stream exclusively on Disney+ beginning August 11.  The new series will explore topics such as “How to Wear a Mask,” “Learning to Cook,” and “Binge Watching.”

Eric Goldberg (the Genie in Aladdin, co-director Pocahontas) directed all three of the films in the series and is the supervising animator on “How to Wear a Mask,” while fellow Disney Animation veterans Mark Henn and Randy Haycock are the supervising animators of “Binge Watching” and “Learning to Cook,” respectively. The shorts are produced by Emmy Award® winner Dorothy McKim (Prep & Landing, Meet the Robinsons). Disney Legend Bill Farmer, the voice of Goofy since 1987, provides the charismatic and clumsy character’s familiar vocals, while actor Corey Burton is the narrator of each short.

Details on the three shorts are below:

“How to Wear a Mask”

Goofy demonstrates the fine art of putting on a face mask as he prepares to leave the house and venture into the outside world. Despite his earnest efforts, Goofy becomes inextricably tangled in the mask before finally finding the perfect fit. “Goofy is such a great physical character,” says Goldberg. “There are so many great physical cartoons that Goofy was in, like Olympic Champ, Goofy Gymnastics, and The Art of Self-Defense, where the narrator is describing all the things Goofy is supposed to do—but, of course, he can’t.” This short continues that tradition. “Goofy’s having fun with it; we’re not making fun of wearing a mask,” McKim notes. “We can all relate to him, and we can have a little chuckle about it.”

It’s a recipe for comedy and disaster when Goofy uses everything but the kitchen sink—along with any and all ingredients in his understocked pantry and refrigerator—to concoct something original and uniquely Goofy. “Goofy will always do something based on his own cracked logic,” says Goldberg. After the narrator explains that a master chef can make anything taste delicious using whatever they have on hand, Goofy is emboldened to do just that—even if it leads to a “bizarro food tower,” Goldberg says. “One of the great things about Goofy is that he always comes up smiling. It doesn’t matter if he makes a completely ridiculous mistake. It’s like, ‘Yes, I’m eating a piece of tin can with beans in it. Boy, this tastes great!’ So, you can always count on that character to keep smiling, no matter what.”

Goofy sticks his neck out to show viewers what it means to be truly flexible when binge watching takes precedence over… well, just about everything! Goofy is remarkably able to multitask and juggle a variety of household activities simultaneously—in a way that only Goofy can. By the time he sits down to watch his favorite show, his gaze is fixated on the screen. “I thought it would be funny for Goofy to settle down with a slack-jawed expression and keep it there for the entire show,” says Goldberg. “Talking about it with Mark, I said, ‘His bottom half acts like Goofy; you’ve got to animate that part as if it’s Goofy, even though the top remains completely stationary.’’ Clean up and background artist Rachel Bibb had the most technically challenging job, says Goldberg, “because there are all sorts of takeovers to keep his head still and keep his body moving, putting down the glass and putting pizza in his mouth. It was very technically oriented, and Rachel was great at keeping that straight.”