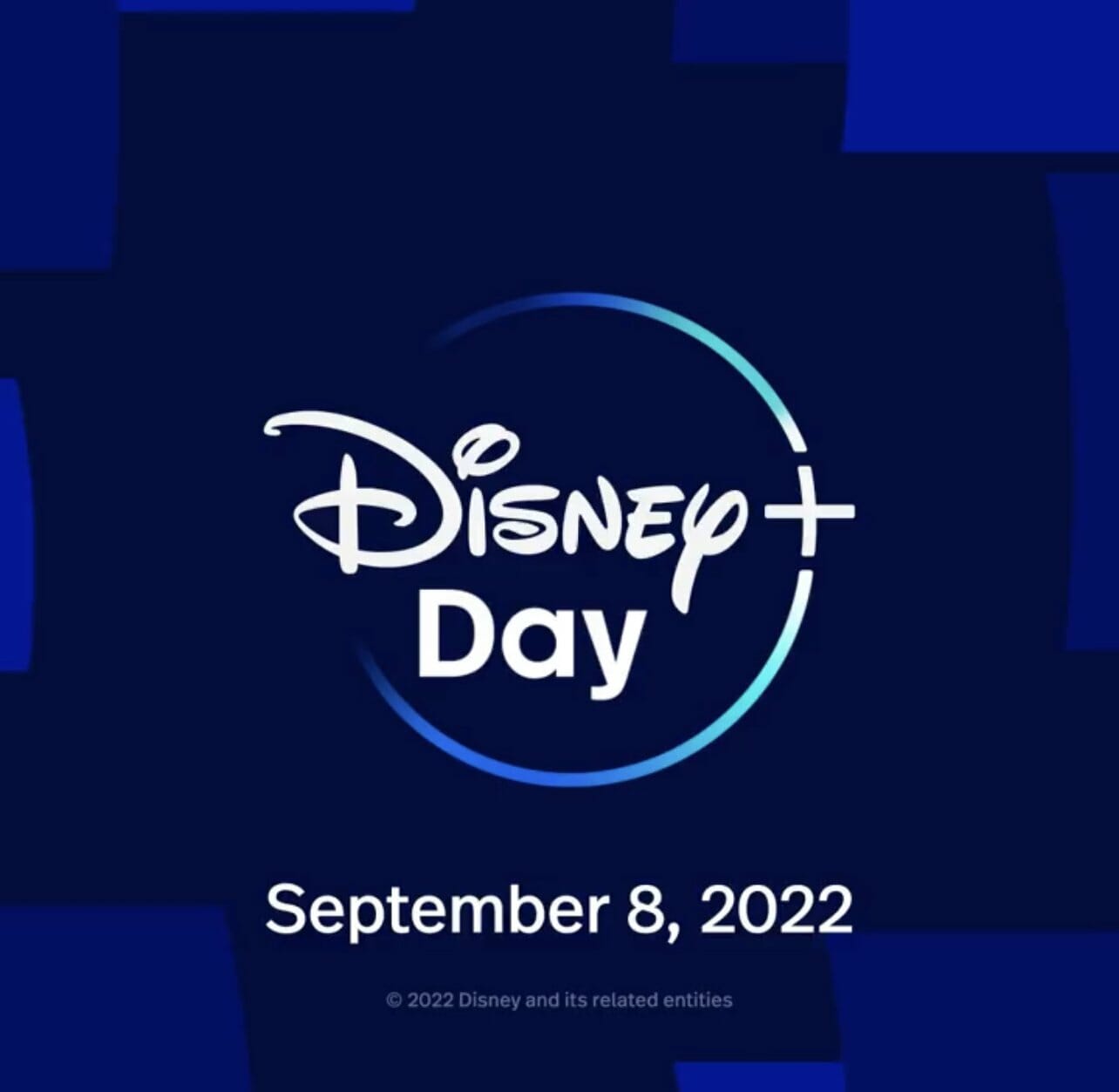 Disney+ Day will deliver even more excitement to subscribers with additional content premiering globally on September 8 as well as celebrations across Disney Parks, Experiences and Products. New titles include Marvel Studios’ “Thor: Love and Thunder” and “Assembled: The Making of Thor: Love and Thunder,” “Obi-Wan Kenobi: A Jedi’s Return,” “Remembering,” “Dancing with the Stars: The Pros’ Most Memorable Dances,” “Tierra Incógnita,” the “Frozen” and “Frozen 2” Sing-Alongs, and “Welcome to the Club,” a new short from The Simpsons. 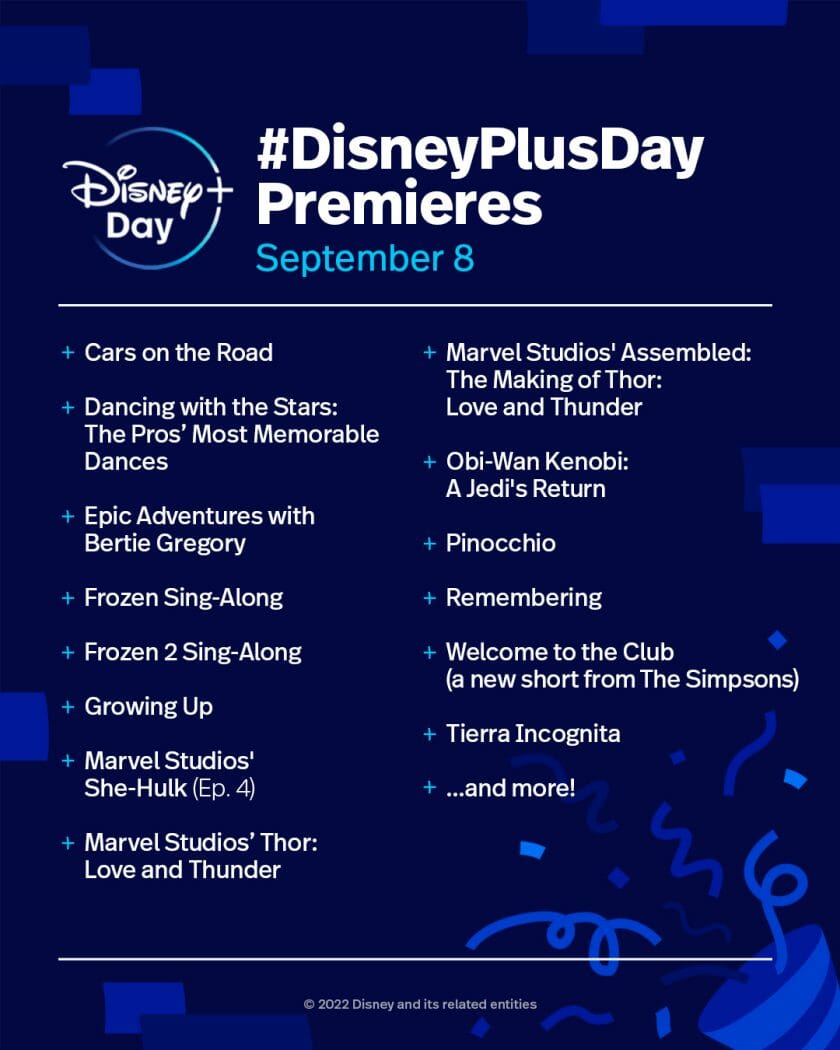 Check out a trailer featuring highlights of what’s coming to Disney+ on Disney+ Day below:

The Disney+ Day lineup will feature anticipated global premieres from Disney, Pixar, Marvel, Star Wars, National Geographic, The Simpsons, and more. In addition to the previously announced “Pinocchio,” a new episode of “She-Hulk: Attorney at Law,” “Cars on the Road,” “Growing Up,” and “”Epic Adventures with Bertie Gregory,” the new content coming to the service will include:

“Marvel Studios Assembled: The Making of Thor: Love and Thunder”

Disney+ will release new Sing-Along versions of Walt Disney Animation Studios’ “Frozen” and “Frozen 2.” As subscribers watch the Sing-Along version of these films, they will be able to fully immerse themselves in the music with on-screen lyrics.

“Welcome to the Club” (a new short from The Simpsons)

“Dancing with the Stars: The Pros’ Most Memorable Dances”

Academy Award® winner Robert Zemeckis directs this live-action retelling of the beloved tale of a wooden puppet who embarks on a thrilling adventure to become a real boy. Tom Hanks stars as Geppetto, the wood-carver who builds and treats Pinocchio (Benjamin Evan Ainsworth) as if he were his own son. Joseph Gordon-Levitt is Jiminy Cricket, who serves as Pinocchio’s guide as well as his “conscience”; Academy Award® nominee Cynthia Erivo is the Blue Fairy; Keegan-Michael Key is “Honest” John; Academy Award® nominee Lorraine Bracco is Sofia the Seagull, a new character, and Luke Evans is The Coachman.

“Cars on the Road”

The series follows Lightning McQueen (voice of Owen Wilson) and his best friend Mater (voice of Larry the Cable Guy) as they head east from Radiator Springs on a cross-country road trip to meet up with Mater’s sister. Along the way, every stop is its own adventure, with outrageous roadside attractions and colorful new characters. “Cars on the Road” is produced by Marc Sondheimer. The series’ episodes are directed by Steve Purcell (Eps 1, 2, 8), Bobby Podesta (Eps 5, 6, 9) and Brian Fee (Eps 3, 4, 7). Composer Jake Monaco created the score for all nine episodes.

Created by Brie Larson and Culture.House, “Growing Up” is an innovative hybrid docu-series that explores the challenges, triumphs, and complexities of adolescence through ten compelling coming of age stories. From Disney Branded Television, the series uses narrative, experimental, and documentary filmmaking to follow one casted individual, ages 18-22, as they tell their story. They represent a wide range of lived experiences, giving audiences emotionally powerful narratives that offer an engaging look at teenage-hood and the diverse social, familial, and internal obstacles young people face on their path to self-discovery and acceptance. Each 30-minute episode features one young person, or “hero,” and their experience growing up. Each episode is anchored by a deeply personal interview that allows our heroes to walk us through their childhood and teenage years. Alongside these interviews, creative cinematic reenactments help bring their major inflection points to life.

The face of a new generation of aspirational adventurers and natural history filmmakers, 29-year-old National Geographic Explorer Bertie Gregory takes viewers on epic and nail-biting journeys that push into the most spectacular and secretive corners of our wild world. Armed with leading-edge film technology, the Disney+ original series “Epic Adventures with Bertie Gregory,” from National Geographic, breaks the mold of the traditional natural history program by telling extraordinary, real-life animal stories and taking viewers with him for every beat of the action. For weeks at a time, the charismatic BAFTA Award-winning cinematographer immerses himself into the animals’ lives to capture the untold stories of iconic creatures living in some of the harshest environments on our planet. This season, we will see Bertie braving the icy worlds of Antarctica in search of the biggest gathering of whales ever filmed and coming face-to-face with specialist buffalo-hunting lions in Zambia. In this multipart adventure series, he will take audiences on an ambitious odyssey across the globe, showcasing the natural world at a time when it faces its greatest challenges.

In celebration of Disney+ Day, guests at Disney theme parks will discover new ways to “plus” up their experience with special offerings and fan-favorite fun. On September 8, Walt Disney World Resort in Florida and Disneyland Resort in California will usher in the festivities with Disney+-inspired character meet-and-greets, photo opportunities and more. Disney+ subscribers and their party with theme park tickets and reservations are once again invited to enter the theme parks at Disneyland Resort and Walt Disney World Resort 30 minutes before regular park open on September 8. Subscribers will also enjoy complimentary Disney PhotoPass digital download(s) at select locations at Disney’s Hollywood Studios and the Disneyland Resort theme parks that day.*

Fans are invited to join the celebrations digitally by stepping up their selfie game with Disney PhotoPass Lenses for Disney+ Day. These new limited-time lenses will be available to those celebrating in the parks or at home in the U.S. through Snapchat and the My Disney Experience app.

Disneyland Paris will delight guests with new surprises including special entertainment, dedicated photo opportunities and a blue-themed dessert on September 8. For more fanfare, Disney+ subscribers* and their party with theme park tickets and reservations are invited for the first time to enter Disneyland Park at Disneyland Paris at 9:00am (30 minutes before regular park opening) only on September 8, 2022. Hong Kong Disneyland will celebrate with guests visiting the park on September 10.

During the Aug. 29-Sept. 5 Disney Vacation Club Member Cruise, Members aboard the Disney Wonder will be treated to special gifts from Disney+ and 9 exclusive shows and experiences supporting current and upcoming Disney+ programming.

Around the world, Consumer Products, Games and Publishing will also be celebrating Disney+ Day. Stay tuned in the coming weeks for more details on how to join in on the fun.

*Guests may be required to verify that they are a Disney+ subscriber by displaying their logged-in home screen on the Disney+ app via their phone to enter early and to receive special benefits at the parks. Please be sure to download the Disney+ app and sign in prior to arrival.

From September 8-19, select AMC Theatres will celebrate Disney+ Day with screenings of fan-favorite movies including Walt Disney Animation Studios’ “Encanto”, “Rogue One: A Star Wars Story”, Marvel Studios’ “Thor: Ragnarok,” Disney and Pixar’s “Cars” and “Newsies.” Tickets are $5 per screening and are available to everyone. Attendees will receive a free Disney+ poster, while supplies last. Plus, a special concessions offer will be available for Disney+ subscribers. Tickets will be on sale on September 1.

Additional special subscriber perks will be announced in the lead-up to September 8.

This year, Disney+ Day will lead into D23 Expo: The Ultimate Disney Fan Event presented by Visa in Anaheim, CA that runs from Friday, September 9 to Sunday, September 11.