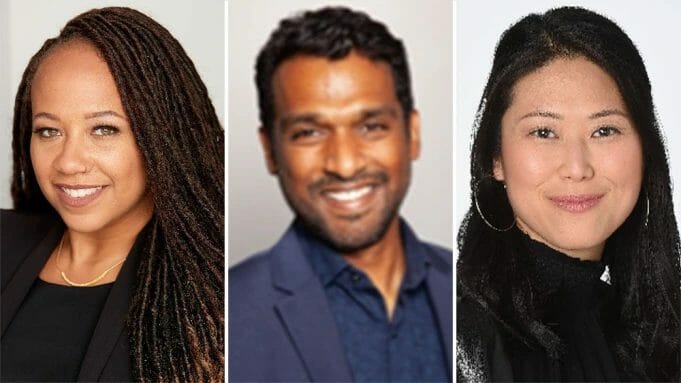 Ashley Holland, Anil Kurian and Janice Park have joined the rapidly expanding Onyx Collective, Disney’s newest content brand designed to curate a slate of premium programming by creators of color and underrepresented voices. Former WME partner Holland is set as senior vice president of Scripted Series, along with seasoned producers Anil Kurian and Janice Park, who will both serve as vice presidents of Scripted Series. All three will report to Tara Duncan, president of Freeform and Onyx Collective.

Holland, Kurian and Park will spearhead the development and production of Onyx’s scripted series and specials across all programming categories and formats. The three executives round out Duncan’s existing leadership team, which includes nonfiction programming executives Jacqueline Glover, head of Documentary and Jihan Robinson, vice president of Alternative.

“Building an entertainment brand from the ground up requires a special skill set and innate love of storytelling,” stated Duncan. “Ashley, Janice and Anil are the perfect fit for Onyx — they’re respected, passionate, creative executives with discerning taste and a reputation for having great relationships with creators. I couldn’t be more excited for them to take the reign of Onyx Collective’s scripted slate and help bring our vision to life.”

Holland stated: “I’ve built a career advocating for stories centered around the lives of people of color. I couldn’t be more honored to join a company where I get to live my values every single day. Tara is an executive I’ve collaborated with on many occasions and long admired. She built a bridge to me that I could not help but walk across, and together, with the rest of the team at Onyx, we hope to grow a brand where the content is first and foremost entertaining and synonymous with excellence to creators and audiences.”

Kurian said: “What Tara is building at Onyx is nothing less than extraordinary, and I am so incredibly excited about the opportunity to contribute to her team at such an essential time in our industry. Their goal, to create premium content with a much-needed point of view, is one that I can certainly get behind and champion.”

Park added: “To join Onyx Collective and this world-class team with a shared vision that is a direct reflection of my own values and taste is a dream come true and the opportunity of a lifetime. Tara is a force to be reckoned with, and no other brand on this level exists for premium, uncompromising storytelling from creators of color. I am humbled and excited by the task at hand and can’t wait for audiences to see what’s next.”

Onyx Collective, which launched just one year ago, has made enormous strides in elevating and empowering artists of color and telling globally entertaining stories from a culturally specific point of view. Most recently, the brand made headlines with back-to-back Oscar® and GRAMMY® wins and a Peabody nomination for Ahmir “Questlove” Thompson’s critically acclaimed documentary “Summer of Soul (…Or, When the Revolution Could Not Be Televised),” currently available to stream on Hulu, Disney+ and Star+. Onyx’s first scripted drama, “Reasonable Doubt,” starring Emayatzy Corinealdi, will launch later this year and is produced by Kerry Washington’s Simpson Street, ABC Signature and Wilmore Films. Washington will also produce and star in Onyx Collective’s first comedy, the recently announced “Unprisoned,” about a messy but perfectionist relationship therapist whose life is turned right-side-up when her dad gets out of prison and moves in with her and her teenage son. Additionally, Onyx landed the highly competitive limited series “The Plot,” starring Oscar, Emmy®, BAFTA and NAACP Image Award-winning actor Mahershala Ali, produced by Endeavor Content, POV Entertainment and Ali’s Know Wonder (Ali also serves as EP). The series is an adaptation of the best-selling novel of the same name by Jean Hanff Korelitz. In addition, the content brand has also secured overall deals with prolific producers Ryan Coogler, Prentice Penny, Natasha Rothwell and Destin Daniel Cretton.

Holland joins Onyx from WME, where she was a partner who represented top-level talent, including Prentice Penny and Ryan Coogler (both with Onyx Collective overall deals), Boots Riley, Riz Ahmed and more. She was intimately involved in the selling of shows like HBO’s “A Black Lady Sketch Show” and Starz’s “P-Valley” and was instrumental to WME’s growth as a company to develop its next generation of leaders and their diversity and inclusion efforts. She serviced such agency clients as Halle Berry and Janelle Monae and worked intimately with independent studio clients like Media Res (“The Morning Show”) and Macro TV Studios (“Raising Dion”). A Stanford graduate, Holland started her career at CAA, where she spent eight years rising through the ranks to agent in the television department and helped spearhead initiatives like CAA Amplify that champion connectivity for high-level diverse executives and influencers.

Kurian joins Onyx from Curtis “50 Cent” Jackson’s G-Unit Film and Television, where he was head of Development, overseeing the company’s expansive slate of current series and development, including the company’s overall deal with STARZ. Prior to his role at G-Unit, Kurian was vice president of Original Programming for (Sony) Crackle, where he spearheaded the production and development of scripted dramas, including “The Art of More” starring Dennis Quaid, “Startup” with Martin Freeman and Adam Brody, and the TV reboot of “Snatch” starring Rupert Grint as well as multiple feature-length films. Kurian joined Sony following a decade in independent film and TV productions, working on features including “Revelations,” written by Hernany Perla, whose scripts have been featured twice on Hollywood’s Black List. As vice president at Intrepid Pictures, he produced films including the psychological thrillers “Oculus,” directed by Mike Flanagan, and “Crush,” directed by Malik Bader. Kurian got his start at Endeavor Entertainment and is a graduate of NYU’s Stern School of Business.

Prior to Onyx, Park was senior vice president of Development and Production at Made Up Stories, Bruna Papandrea’s production banner behind HBO’s “The Undoing,” Hulu’s “Nine Perfect Strangers” and Netflix’s “Pieces of Her.” During her successful tenure at Made Up Stories, she oversaw TV and feature film projects set up at Amazon, Apple, Hulu, HBO, Netflix and Universal. Most recently, she produced Pam Veasey’s original series “Long Slow Exhale” for Spectrum Originals and BET. She is an active supporter of CAPE, NALIP, and Colour Entertainment. Park began her career as an assistant at UTA in the Independent Film Packaging Group and TV Literary Department.