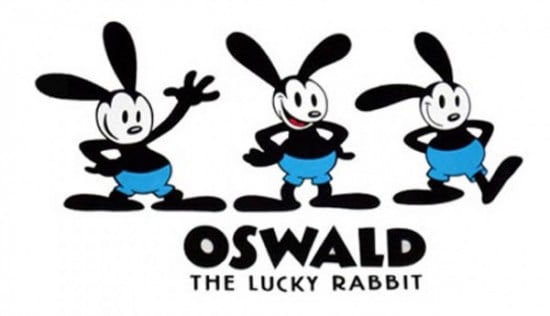 “Oswald: The Lucky Rabbit” was created in 1927 by Walt Disney for Universal Pictures. He starred in several animated short films released to theatres from 1927 to 1938. After the control of Oswald’s character was taken in 1928, Walt created a new character similar in appearance to Oswald as a replacement; Mickey Mouse.

Disney was unable to use the character as Universal owned the full rights to the character. However, In 2006, The Walt Disney Company acquired the trademark of Oswald (with NBCUniversal effectively trading Oswald for the services of Al Michaels as play-by-play announcer on NBC Sunday Night Football).

Oswald returned in Disney’s 2010 video game, Epic Mickey. He has since appeared in Disney Parks and comic books and two follow-up games, Epic Mickey 2: The Power of Two and Epic Mickey: Power of Illusion. Oswald made his first appearance in an animated production in 85 years through his cameo appearance in the 2013 animated short Get a Horse!, which is available on Disney+.

Iger was very serious about it. The Legend of the Three Caballeros team was going to follow up with an Oswald show for steaming. Scripts written, designs done, animation test in hand, and a pilot in production. It was beautiful! Then we got broken up and scattered to the wind.

Hey gang! Don’t be sad about this. Oswald has A LOT of love within Disney. I just wanted to share how serious that love is. I’m sure there will be an Oswald project coming your way in the near future.

While this will be disappointing news to many fans, it’s likely Oswald will make appears in other projects in the future.