“Lightyear” won’t release in theaters until June 17, 2022, but a trailer for the film could be coming sooner than expected.  According to a tweet from a Pixar employee, the trailer is set to be released in November ahead of Disney’s new animated film “Encanto.”  Daniel Gonzales, an animator at Pixar, posted the tweet which was quickly deleted, but not before several followers were able to get a screenshot of the tweet which you can see below: 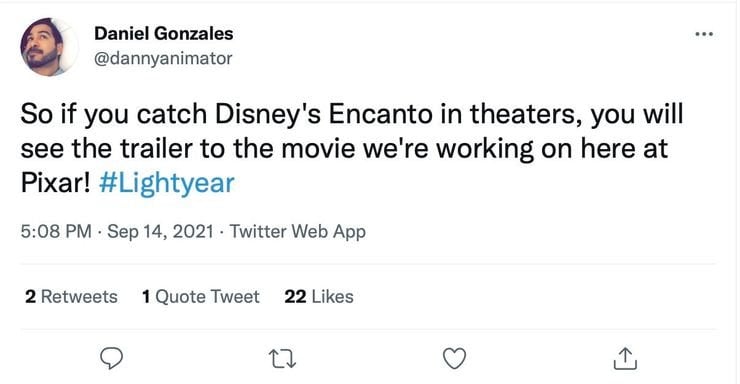 “Lightyear” is the definitive story of the original Buzz Lightyear who will be voiced by Chris Evans.  Angus MacLane is attached to direct.

Pixar’s Pete Docter explained the movie at the Disney Investor Day presentation, “At first glance, you might think, ‘Well, this is a Toy Story film. Well, not so fast. See, back when we created the very first Toy Story, we designed Buzz Lightyear with the idea that he was a toy based on some really cool character from an epic, blockbuster film. Well, all these years later we decided it’s time to make that film.”

No other voice actors have been announced for the series so far, but Disney Plus Informer will keep you updated when that information becomes available.