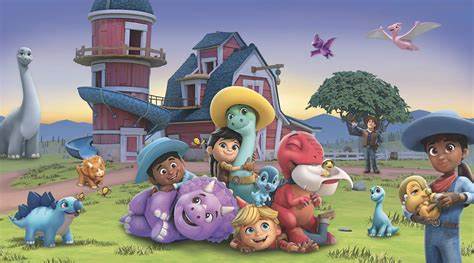 The second season of “Dino Ranch” launched this summer – bigger, brighter and packed with even more ropin’ & riding fun.  In Season 2, join the Cassidy Family on their action-packed adventures in the fantastical “pre-westoric” location, full of roaming dinosaurs and exciting life challenges. As the young ‘rancheroos’ learn the ropes, they discover the thrill of ranch life together with all of the unpredictable challenges of the great outdoors. Problem- solving, life-long friendships, strong family bonds, animal care and many more exciting experiences.

Season 2’s newest episode “Friendship Clashes,” features a prominent theme of acceptance all centered around the dino pals taking part in friendship classes to work on their trust, communication, and corporation skills.  Throughout the episode, the gang learns how to be good friends by listening, working together, and trusting each other, and what the repercussions are when friendship skills are not utilized.  This episode continues “Dino Ranch’s” valuable messages while entertaining kids at the same time.

You can watch a preview clip from the “Friendship Clashes” episode below: