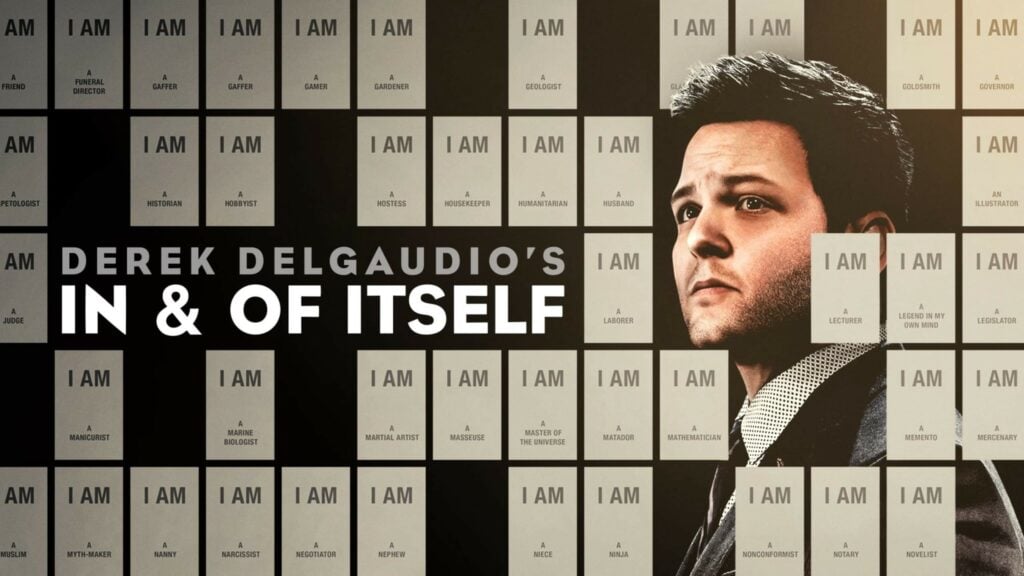 The first thing that happened in Derek DelGaudio’s In & Of Itself in its original incarnation as a live show involved the audience. As they entered the Daryl Roth Theatre, each person passed a wall with cards hanging on it. Each card had “I AM” printed on the top half and then a word or phrase on the bottom half. So you could choose phrases like “I AM the life of the party” or “I AM a father.” The cards were collected and torn in half; you kept the I AM half, they kept the other half. The cards were placed in a pile, which is how the show started.

Available now on Disney+ is a filmed adaptation of the off-Broadway show directed by Frank Oz, who co-produced the original show alongside DelGaudio. This version has managed to do something incredibly hard with filmed live theatre and seemingly impossible with a performance that relies on the audience so heavily: It makes this version feel very, very much like you’re in the same room as what you’re watching on screen.

DelGaudio is a storyteller, performer and magician. Although In & Of Itself is referred to as conceptual magic or interactive theatre, it is more than that. It is presented as a series of scenes, punctuated by slight-of-hand, card tricks, and some extraordinary audience-involved sequences that will leave you questioning how they were done.

I went into watching In & Of Itself without knowing anything about the show itself, or even who Derek DelGaudio was, and I had never even heard of him. I think this was important and informed the way I felt when I watched, so I’m keen not to give too much away here, hoping that you will have the same experience as me. The film is drawn from several live performances, and you’ll even catch a glimpse of a handful of famous faces.

One of the downsides to watching magic is that it can be similar to watching a firework display. At first, you’re startled and amazed at something, an explosion or a card trick, but once you’ve seen that a couple of times, you don’t quite get the same feeling, and in the case of magic, you’re left wondering how it’s done, and if you figure it out, the amazement soon fades away. What is unique about this kind of magic is that it is about something; it is about seeing people and being seen by them, and how the narrative of your life informs who you are. I AM a writer; I AM a father – these stories collide with other stories about you that you didn’t get to write yourself.

The real magic in In & Of Itself is not amazement for amazement’s sake, although I’m sure you’ll be amazed by some of the tricks you see. The real magic is that the unreal is used to create something real; something you know not to take too seriously creates a genuine feeling of connectedness. You’ll get that feeling from the climax of the show, which takes place during the last 15 minutes. The things you see in the show are not as they seem; in the same way, a rabbit does not magically appear in a hat, or a body isn’t being sawn in half. But the way the show makes you feel IS entirely genuine; it makes you identify with yourself and the audience’s emotional reactions in the film.

Occasionally, you get to see quick cuts through the exact moment in the show as it happened in various performances to demonstrate how it looked with different people in the audience. This not only serves to put to rest any theories on how the magic was accomplished but also shows just how important the live element of the show was; every performance offered a different experience for its audience.

As someone who spent a lot of time watching all kinds of magic shows as a kid and wondering just how tricks and illusions were done, this is one show that I am happy to be in the dark over. I prefer to stay quiet in my not-understanding and wonder. I AM amazed; I AM a writer; I AM a critic; I AM satisfied.