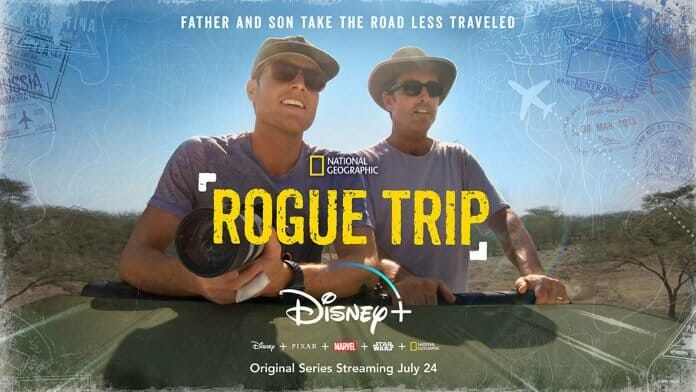 Disney has announced that “Rogue Trip”, a new Disney+ Orginal series will be coming next month.

Taking viewers on a globetrotting adventure with ABC News Correspondent Bob Woodruff and his son Mack, the Disney+ original series “Rogue Trip” will premiere with all episodes available on Friday, July 24. The six-part show from National Geographic follows the two as they embark on an epic journey to some of the world’s most unexpected places – roguish nations and regions mostly known for conflict – and find themselves hiking, rappelling down waterfalls with former rebel fighters and diving and parasailing their way through some of the most gorgeous and surprising places in the planet.

“Rogue Trip” is a story about second chances and the undying bond between a father and son. As a former war correspondent who was severely injured by a roadside bomb while reporting in Iraq in 2006, Bob Woodruff did not want his kids to grow up fearful just because of what happened to him. Bob has seen, and lived, through the worst of what these places have to offer, and now he and Mack explore the best in them.  Along the journey, viewers will share the raw, big-hearted moments when ‘going rogue’ together changes the Woodruffs’ perspective – not just in other people and places, but in their own relationship.

“I couldn’t be more excited to share this series with viewers around the world,” said Bob Woodruff. “This is an adventure of a lifetime to be with Mack discovering together how every place on the planet has the power to surprise, amaze and inspire, despite its past.”

Throughout the six-episodes, Bob and Mack will venture on off-the-guidebook tours in their visits to Colombia, Papua New Guinea, Ethiopia, Pakistan, Lebanon and Ukraine.

Here’s a look at each episode:

COLOMBIA
Colombia’s civil war has ended, opening up swaths of rainforest and savannah to travelers. Bob Woodruff and his son, Mack, tour the country’s off-the-guidebook destinations — rappelling down a waterfall with former rebels, riding the plains with barefoot cowboys, and feasting on grubs deep in the Amazon Rainforest.

PAPUA NEW GUINEA
Bob and Mack start their journey deep in the heart of Papua New Guinea along the banks of the mighty Sepik River where they learn the hunting and healing secrets of a mysterious tribe known as the Crocodile Men. Then they go out to sea to dive with a kaleidoscopic array of exotic marine life and explore mysterious skull caves on a secluded island.

ETHIOPIA
Ethiopia is a time capsule of a nation and a place Bob has always wanted to visit. On their journey through the Rift Valley, Bob and Mack explore traditions both old and new: diving into volcanic hot springs, training with elite marathoners, jamming in a Reggae drum circle and coming face to face with a hungry hyena.

PAKISTAN
The last time Bob visited Pakistan was to report on the war in neighboring Afghanistan. Twenty years later, he’s back with his son Mack to see a different side of the country. Starting in Malala’s hometown, they discover why Queen Elizabeth once called Swat “the Switzerland of the East” before heading towards a Silk Road kingdom along the world’s highest paved road to meet a real prince.

LEBANON
Lebanon is the melting pot of the Arab world, a tiny country exploding with culture. Bob and Mack explore ancient Roman ruins, search for a hermit near a secluded Christian monastery, travel through Hezbollah territory, and visit an artificial reef in the Mediterranean Sea built using tanks and fighter jets.

UKRAINE
For the final leg of “Rogue Trip,” a tired Bob and Mack are getting a much-needed pick-me-up — Mack’s younger sister, Cathryn, is joining the team. Cathryn is ready to shake things up as the family visits Ukraine, one of Europe’s rarely explored gems. The Woodruffs look beyond the headlines and discover Ukraine is a big and beautiful country that has far more than its Soviet past.