Skip to content
Home » Blog » The Falcon and The Winter Soldier Episode 2 Recap: ‘The Star-Spangled Man’ 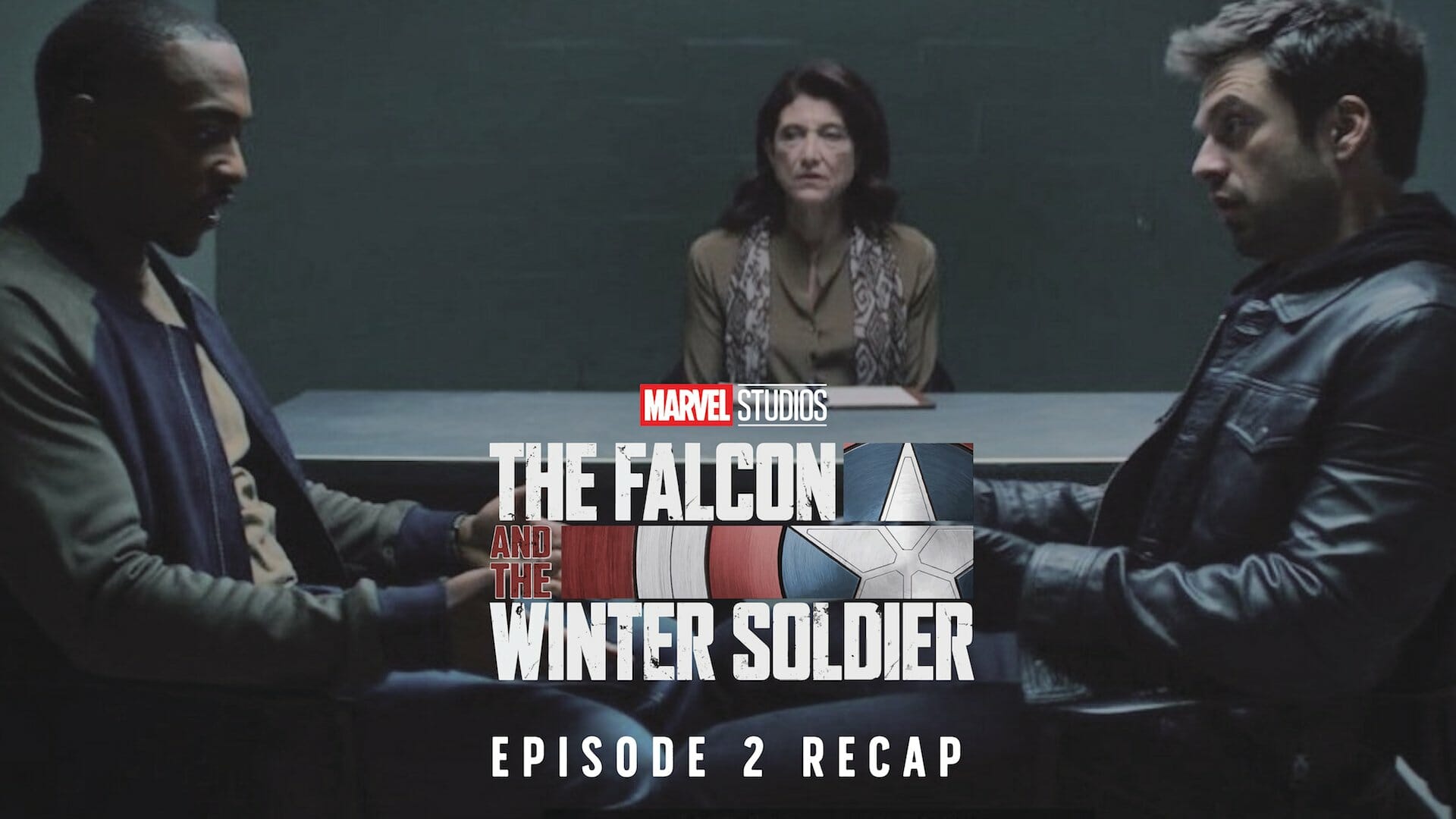 Sam and Bucky finally get together as they deal with terrorists and an encounter with the new Captain America in an action packed episode full of exciting character reveals.

This article contains spoilers for episode 2 of The Falcon and The Winter Soldier. If you haven’t yet seen the episode, bookmark this post and check in with it later. If you have, happy days, lets breakdown some of the details.

Episode 1 showed us a glimpse into Sam and Bucky’s post-blip lives, set 6 months after the events of Avengers: Endgame as the two dealt with their own daily struggles. Right at the end of the episode the new Captain America was revealed, much to Sam’s dismay, after he turned down the role given to him by Steve Rogers and donated the shield to the Smithsonian. It didn’t take a genius to work out that this was going to have major implications on the plot of the series going forward.

Episode 2 takes us straight into an introduction of the new Cap, aka John Walker, a decorated soldier and ex American football player who was chosen to take up the mantle last minute. His introduction at the end of episode 1 set ‘new’ Cap off on the wrong foot, his re-introduction in episode 2 shows him to be actually a decent guy, he comes across as normal and perhaps we all judged him too harshly? 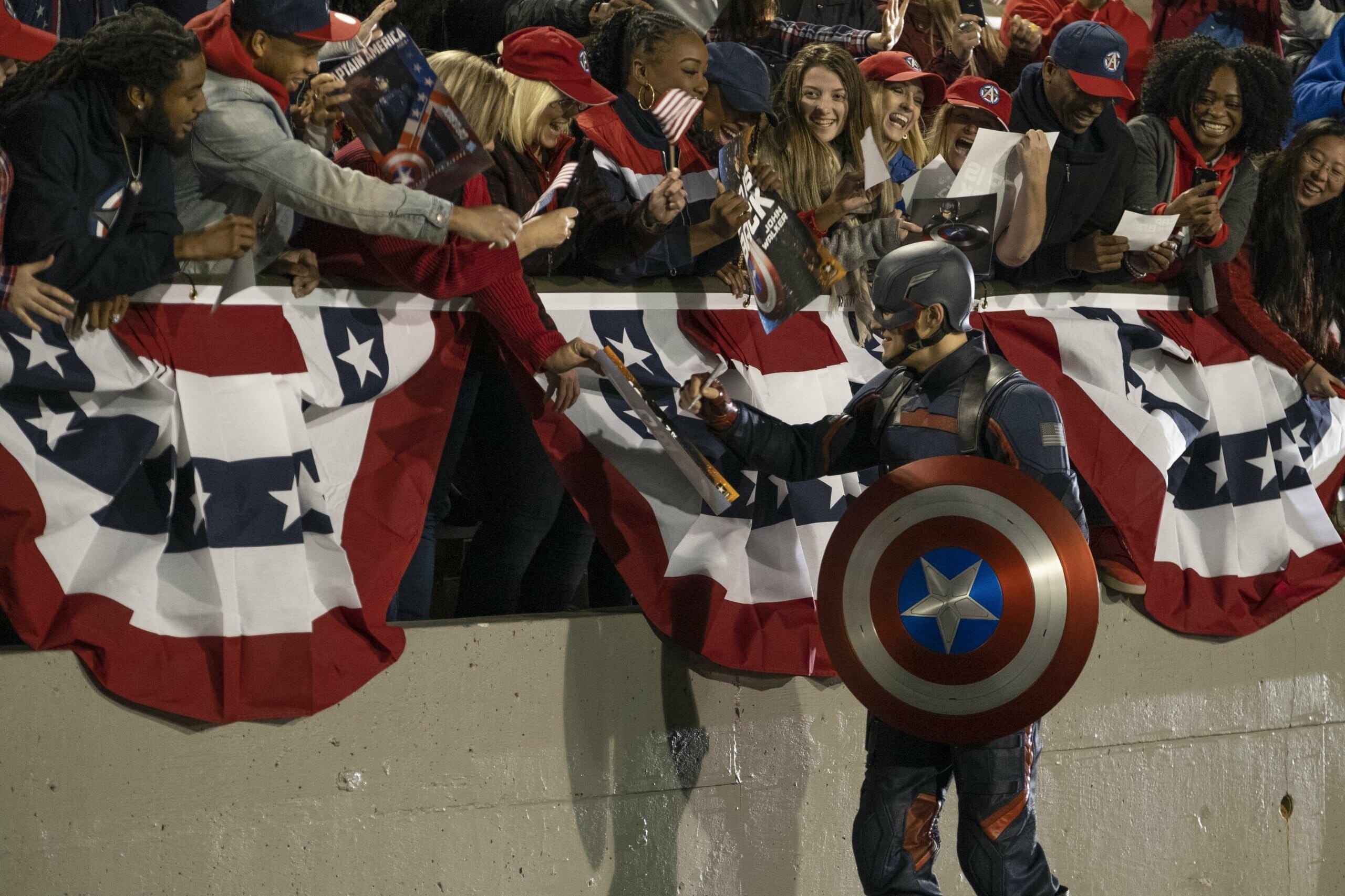 We learn that Walker was hand-picked for the role after his physiology was studied by MIT, we get a glimpse of him practicing with the shield and even meet his girlfriend and best friend, who reinforce the fact that he’s a normal guy. Walker makes an appearance on ‘Good Morning America’, parading around a packed football stadium, signing action figures while a marching band plays a funked-up version of the “Star-Spangled Man” song that was introduced in Captain America: The First Avenger, as the theme for Steve Rogers during his USO shows. The scene itself is a great throwback to the first Captain America movie, the way both Caps are used as a PR exercise. Steve Rogers was originally used to promote America’s war effort, traveling the country and fighting fake enemies to sell war bonds, John Walker, with an updated theme song it seems is being used in the same way, with bonds being replaced by action figures.

Walker gives us a speech that’s full of soundbites, he’s never met Steve Rogers but he “feels like a brother” and like the original Cap, “has the guts to see him through” Cut to Bucky watching the interview on TV, gritting his teeth….

You can’t help but compare John Walker to Steve Rogers, and I feel like that’s the point. There are definite parallels between the two. There’s a throwback to Captain America: Civil War, when Walker’s friend mentions that he “cant punch his way out of problems anymore” A line that Black Widow says to Steve. Going back to seeing him use the shield, he seems very good, especially for someone who hasn’t had the advantage of the Super Soldier Serum Steve was given. 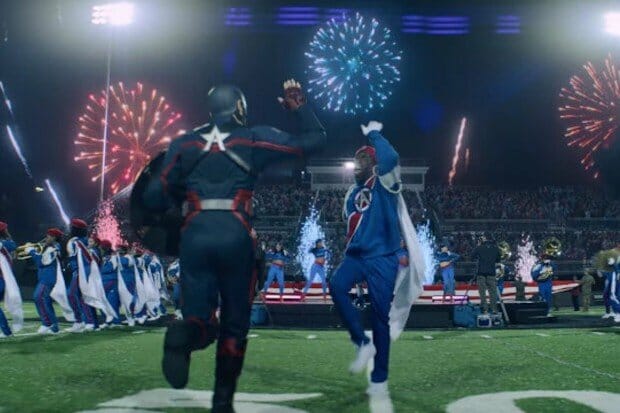 There are obviously differences between the two Caps, and I think we’re going to see that really play out as the series goes on. One of the fundamental parts of Steve Rogers character was the fact that back in The First Avenger, Dr Erskine chose Steve, a small asthmatic man rather than the other, athletic soldiers he was offered. His reason for this was that a strong man who has known power his whole life, will loose respect for that power. But a weak man knows the value of strength, and knows compassion. Walker has known strength and power his whole life, and although we don’t see him as a villain yet, his arrogance and entitlement start to show through during this episode.

So, back to Bucky and Sam, who finally come together after last week’s episode kept them apart. Bucky is clearly incensed at seeing ‘New Cap’ being paraded on the TV (literally) so he shows up at Sam’s work to have it out with him. The two are great onscreen together, so much charisma and charm, very much like Riggs and Murtaugh in Lethal Weapon, which was clearly a source of inspiration for the writer’s room. Without being asked, Bucky joins Sam on his government mission to covertly track the Flag Smashers.

The pair end up in Germany, to intercept a convoy of lorries carrying a stolen vaccine, they’re caught out and overpowered by the Flag Smashers (RIP Redwing) who Sam and Bucky now recognise as “super-soldiers” but Walker and his sidekick Battlestar show up just in time to pull them out. Walker seems handy with the shield, he’s no Steve Rogers and he isn’t a match for Kari, the true leader of The Flag Smashers. Bucky and Sam still aren’t willing to accept ‘New Cap’ and head off on their own to track down another lead.

This is where episode 2 gets interesting, especially if you’re a Marvel Comics fan as Bucky takes Sam to meet someone. They show up in a rundown street and we’re introduced to Isaiah Bradley. Known in the comics as the ‘black Captain America’, Bradley was part of an attempt to recreate the super-soldier serum after Steve Roger’s creation. He briefly took up the shield and costume, but his story didn’t have a happy ending. Bradley wasn’t treated well by the US military, he was experimented on, captured by the Nazis and then put in prison when he returned home. Later in life he suffered mental and physical trauma due to the serum used on him.

It seems like at least part of that storyline is being used in The Falcon and The Winter Soldier, although we don’t fully know what Bradley’s role will be going forward. It’s worth noting the introduction of Bradley’s grandson, Eli who becomes Patriot in the comics, leader of the Young Avengers. Unwilling to trust Bucky after a previous encounter while Bucky was an assassin, Bradley throws Bucky and Sam out of his house. After a meeting with some local police in which Sam is racially profiled, Bucky ends up being taken away in handcuffs, as he’s wanted for missing his court-mandated therapy session.

After a hilarious joint therapy session, in which we find out that Bucky has issues with Sam turning down the Captain America gig, leading to insecurity about his own redemption which is set to be a key theme throughout the series as he comes to terms with his past. A cocky John Walker gets the pair out of being arrested under the assumption that they would agree to work alongside him from now on, which they obviously decline. Walker warns them to “stay out of his way” which really shows his sinister side. Turns out he’s not as nice as we first thought. 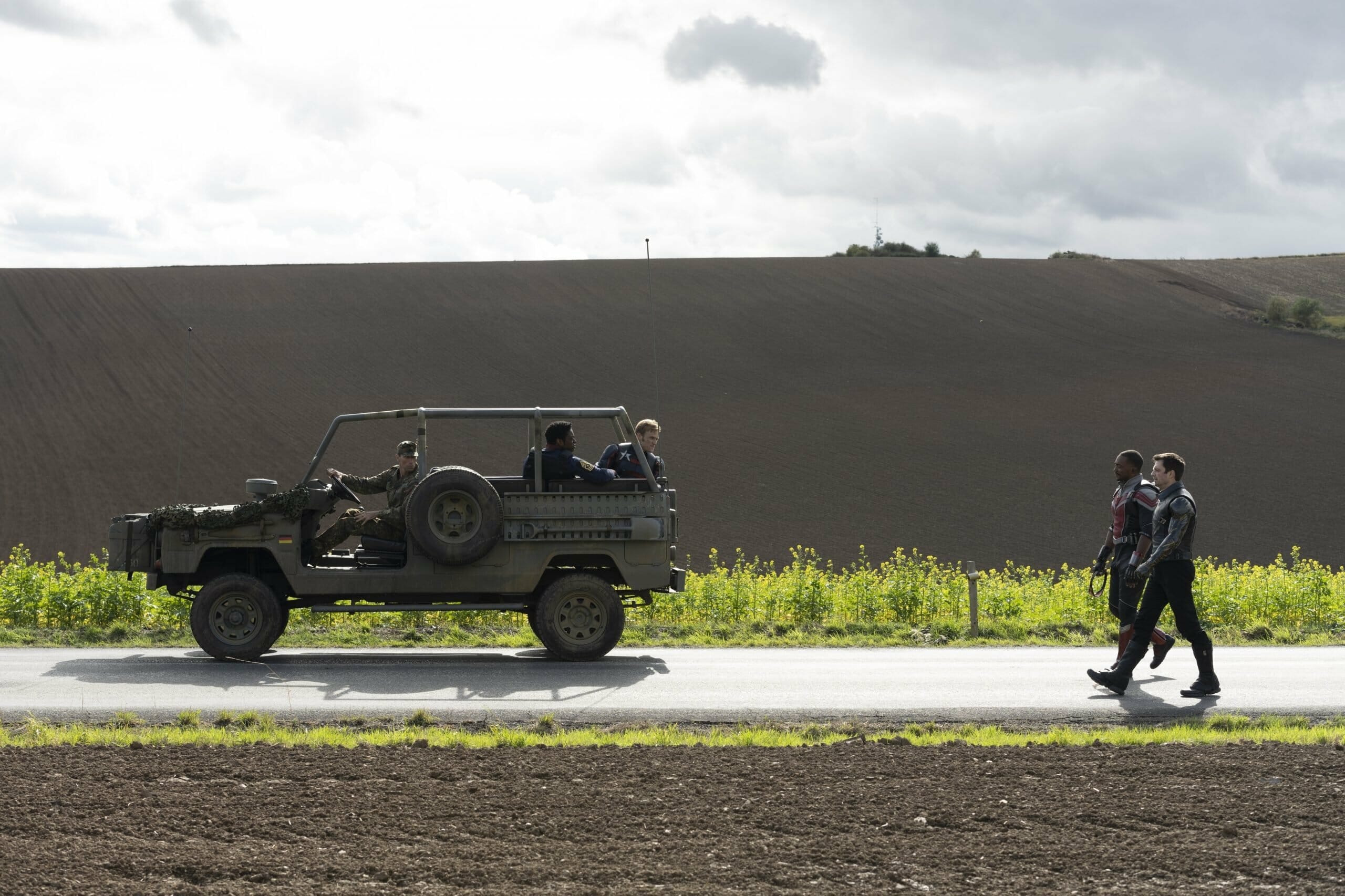 At the end of the episode, Bucky speaks of knowing someone who can help them, someone who “knows all of Hydra’s secrets” a reluctant Sam agrees that they should “go see Zemo” and off they head for a Captain America: Civil War reunion. We get a brief glimpse of Daniel Brühl’s Helmut Zemo who’s living his best life locked up in a secure facility enjoying a game of chess. Expect some kind of break-out in episode 3 as we know from the trailers that Zemo will be headed off on a jolly. 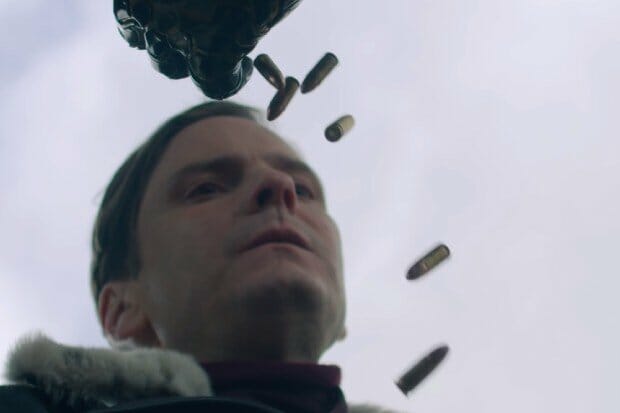 Another solid episode with plenty of action and back story, character reveals a plenty and some great dialogue between Bucky and Sam, who really are good together on screen. I realised that we’re now a third of the way through this series, and although the longer episodes suit this kind of story more, I cant help but feel I’ll be disappointed when it’s over in just a few short weeks.