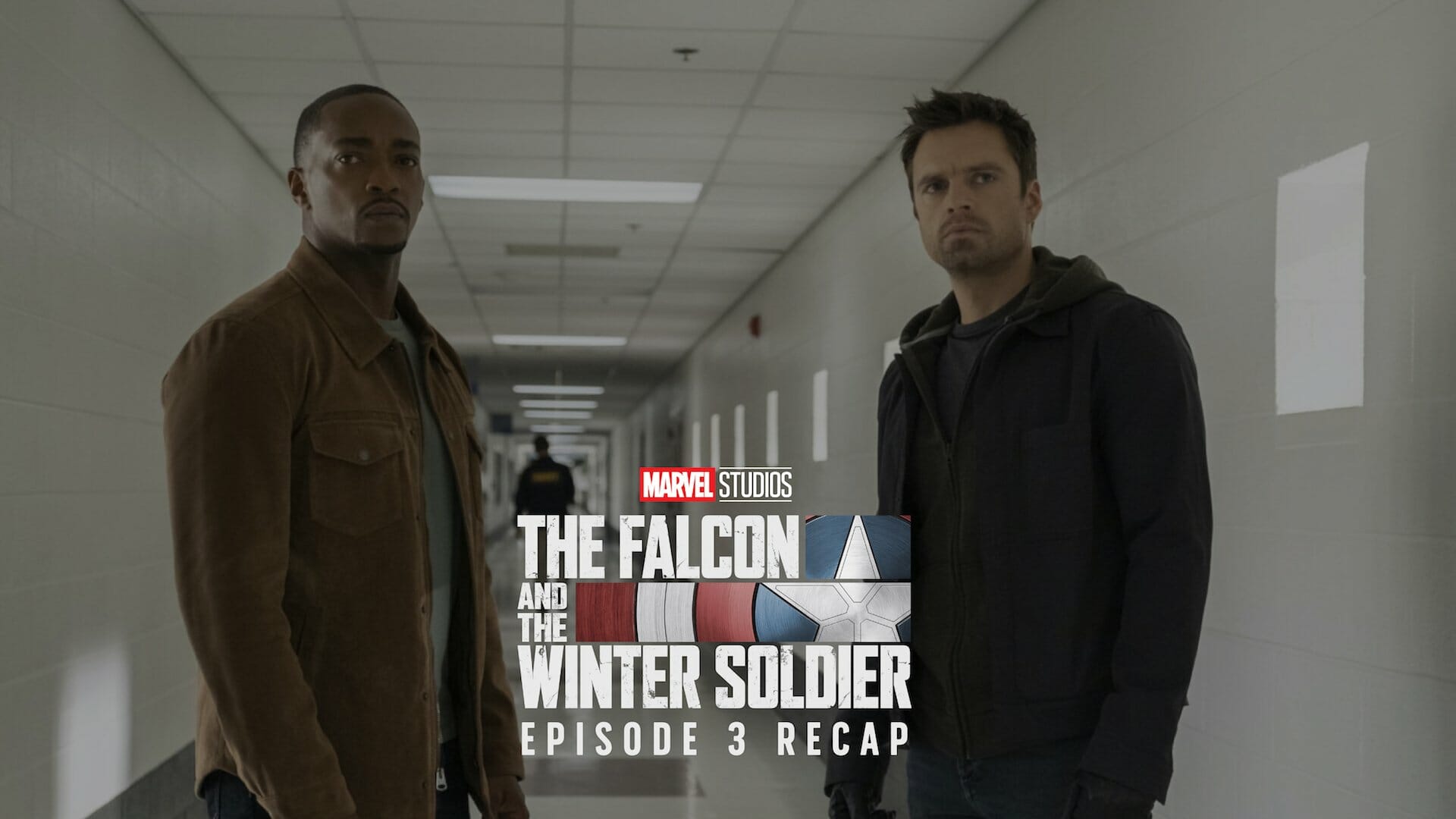 This recap contains spoilers for Episode 3 of The Falcon and The Winter Soldier, if you haven’t yet seen it, bookmark this post and come back to it once you have.

The midway point of The Falcon and The Winter Soldier brought with it a whole heap of details, and plenty of action, not to forget a catch up with two characters that were last seen way back in Captain America: Civil War. It feels to me very much like the first three episodes have all been focused on setting up the series and its characters, with things seemingly now in place I think we’re in for a wild ride as we make our way towards an epic conclusion. The episode was titled “Power broker” in reference to Sam and Bucky’s cross-country jaunt in search of the mysterious source of the super-soldier serum, but I feel like Marvel and Disney missed a trick in not calling it “Finding Zemo” Am I right?

The episode starts with a commercial fro the Global Repatriation Council, which felt very ‘WandaVision’ so I’ll be breaking that down in another post, telling you all about what it means, which Infinity stone it represents and how it sets up Mephisto as the Big Bad of the series. Joke. It honestly felt like it was used to move the plot along and give context to how the world is reacting to billions of people retiring after 5 years away. The GRC has been set up to help people “Reset, Rebuild, Restore, and on the face of it seems fairly friendly, unlike John Walker who is seen leading a raid on the people who helped the Flag Smashers in episode 2. He’s starting to show his true colours now, and they they certainly aren’t the red, white and blue of Steve Rogers.

Bucky and Sam manage to stay ahead of Walker, who’s heavy handed raid draws a blank. The pair head out to pay a visit to Zemo, currently residing in a maximum security prison, which gives off pure Silence of the Lambs vibes. Bucky goes in to see Zemo alone and manages to arrange his escape, much to Sam’s surprise. The three of them agree to work together to track down the mysterious Power Broker, who happens to be someone Zemo knows, he’s happy to help of course as it fits in with his unfinished plan to rid the world of super-soldiers. 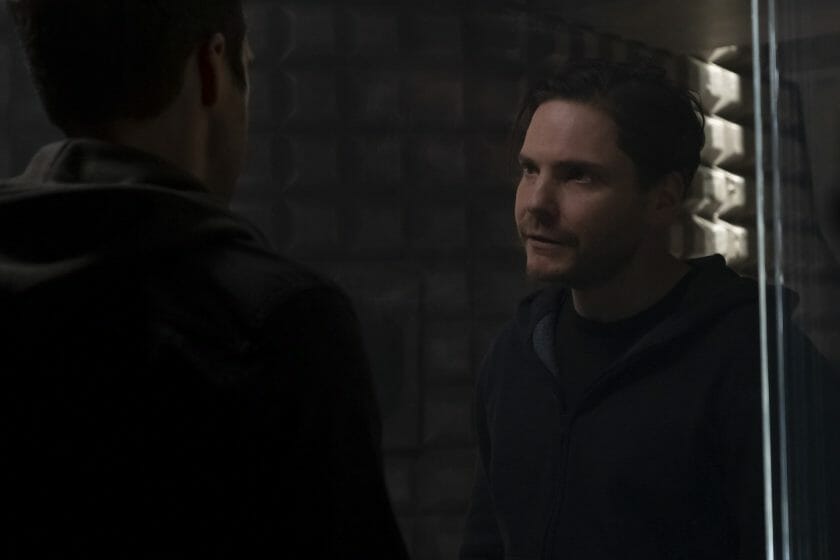 It turns out that Zemo has been royalty all along which gives him access to a private jet and plenty of cash to fund the trio’s mission. This expansion of his backstory is in line with the comics, and his transition to Baron Zemo brings with it the purple mask, which we get to see in the MCU for the first time. They head off to the fictional island of Madripoor to “scale the ladder of lowlifes” If you’re unsure of what Madripoor is about, it’s like Mos Eisley meets Blade Runner. It’s the kind of place you go if you’re looking for the kind of low-life who might know a thing or two about some black market super-soldier serum.

Zemo’s plan is for Bucky to pretend to still be the Winter Soldier, while Sam has to assume the identity of a villain called Smiling Tiger, who kind of looks like Sam if he Dressed like a pimp. The plan goes really well, everyone is afraid of the Winter Soldier, presumably his reputation precedes him, however their cover is blown when Sam’s sister rings him. All hell breaks loose but luckily they have a guardian angel who helps them escape, albeit with a huge bounty on their heads.

Their guardian angel turns out to be Sharon Carter, who we find out has had it tough the past few years since helping Cap and Sam save Bucky back during Civil War. She’s carved a sketchy life for herself hustling stolen art in Madripoor, and although she’s not best pleased to see Bucky and Sam, agrees to help them in exchange for them negotiating her pardon back home. After hanging out at her party, they head to a shipping port where they discover the secret lab of Dr Nagel, the scientist who manufactured the super-serum that transferred the Flag Smashers.

One of the stand out scenes from the episode is Sharon Carter brawling with a bunch of dudes who are trying to get to Sam and Bucky while they’re in the container interrogating Nagel. Sharon, it turns out is a total bad-ass, a path she seems to be following from the comics, which saw her MIA for a while and when she returned she was a different person, much more gritty and ruthless. Its interesting that the credited writer of this episode is Derek Kolstad, who you may know from writing John Wick. Sharon’s ultra-violent fighting style could easily be taken from a John Wick movie.

Things obviously go wrong when the lab is blown up, right after Zemo kills Nagel, completing his mission to finally end the super-soldier programme. The three head off, on another lead on the Flag Smashers leaving Sharon behind waiting for her pardon.

Not much has been seen of the Flag Smashers this week, other than Karli mourning the loss of what seems like her mother who dies inside their resettlement camp. The group do raid a GRC facility, stealing loads of supplies and then blowing the place up, harsh.

As Sam, Bucky and Zemo arrive in Latvia, Bucky decides to take a walk on his own, it turns out he’s spotted a familiar bit of tech, he follows the breadcrumbs that lead to none other than Ayo, the second-in-command of the Dora Milaje, she’s obviously been sent straight from Wakanda presumably after they learned of Zemo’s escape, him being responsible for the death of King T’Chaka and all.

And there ends the episode, another fun hour that was full of action and great chemistry between the shows characters, Zemo adds a brilliant dynamic to Sam and Bucky’s interactions, kind of like a less annoying Leo Getz to Bucky and Sam’s Riggs and Murtaugh. There’s a fair few cool references and nods to the comics which I’ll unpack in a separate post but for now I’ll leave you with my personal hi light of episode 3.