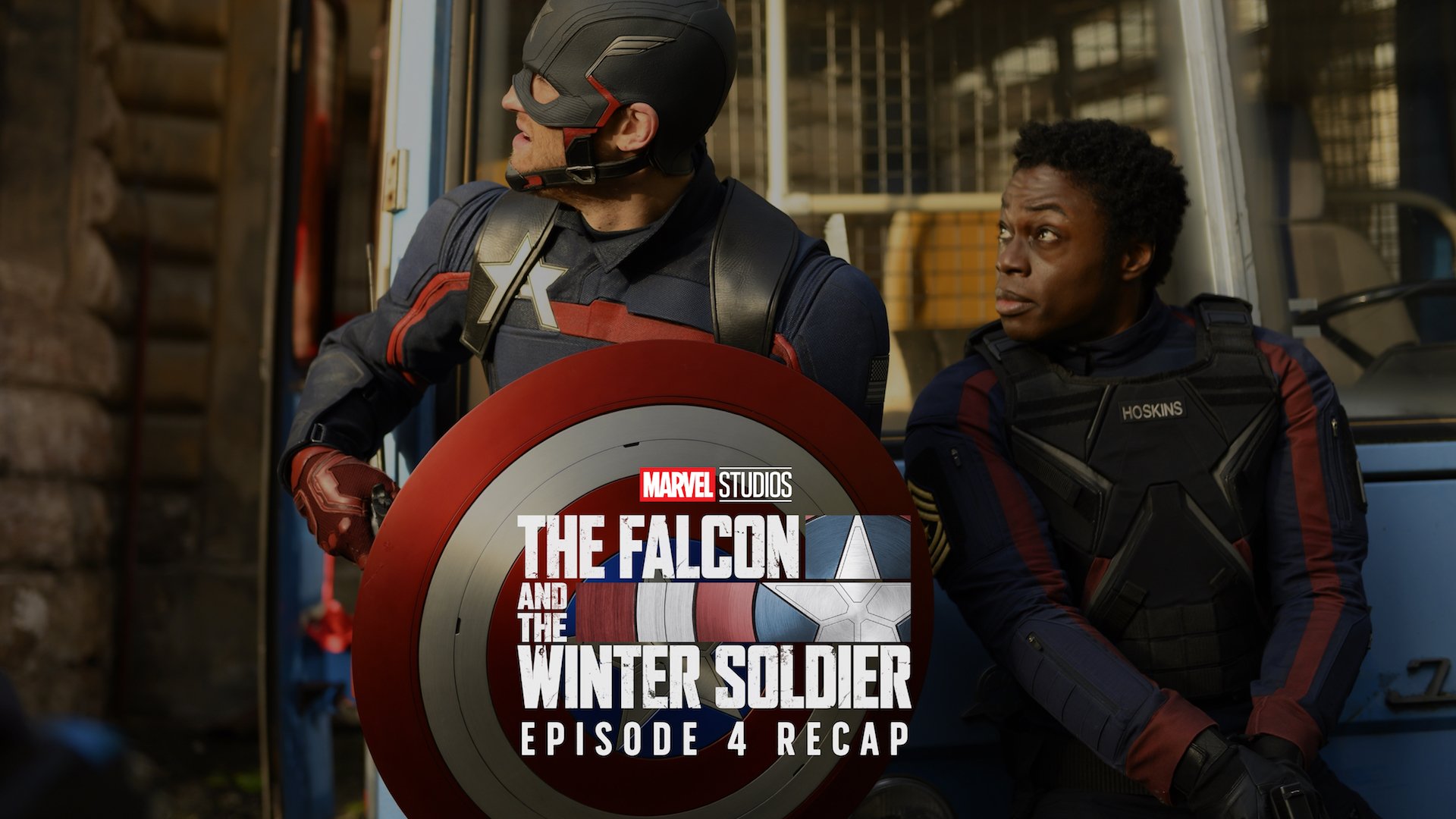 This recap contains spoilers for episode 4 of The Falcon and The Winter Soldier. If you haven’t yet seen it, bookmark this post and come back to it once you have.

There’s a lot to unpack this week, with some of the best action sequences we’ve seen in the series so far and an ending that has left us shocked. We’ve been given more insight into the motivations of both the Flag Smashers and John Walker, an incredible fight scene that reminded of us just how bad-ass the Dora Milaje really are and Zemo sipped his tea.

The opening sequence takes us to Bucky’s time in Wakanda, as the original broken white-boy, given to Shuri to fix. It happens that he spent some of that time around a campfire with Ayo, who helped him to break free of his Hydra brainwashing. It’s an emotional scene that shows how much the Wakandans did to help rehabilitate him, making Ayo’s appearance at the end of episode 3 slightly awkward for The White Wolf.

Naturally Wakanda isn’t happy with Bucky’s plan to break out the guy responsible for killing their king back in Civil War. The Dora Milaje have been sent to sort things out and give Bucky eight hours to get what he needs from Zemo before they come back to get him.

Now obviously Zemo has been charming and dare I say likeable so far, he’s added a really funny dynamic to Bucky and Sam’s relationship but lets not forget that he’s a wrong-un. It’s not long into the episode that he gets the upper hand over Bucky and Sam, withholding information to make sure they keep him in play and not just hand him over to Ayo who’s counting down the hours. He’s also been plying kids with Turkish delight like some kind of weird White Witch. I was wondering about his flashy fur-collared coat, has anyone seen Aslan recently?

Turkish delight isn’t a Marvel reference, it’s a Chronicles of Narnia one. The scene and reference is used to confirm that you shouldn’t take any of the good things Baron Zemo is offering without a heavy dose of caution. In the same way the White Witch bribes Edmund into betraying his family and the freedom fighters of Narnia, Zemo bribes a young girl into giving up the location of Karli and The Flag Smashers. The 500 euros helped too, but its the Turkish delight that is the red flag here. 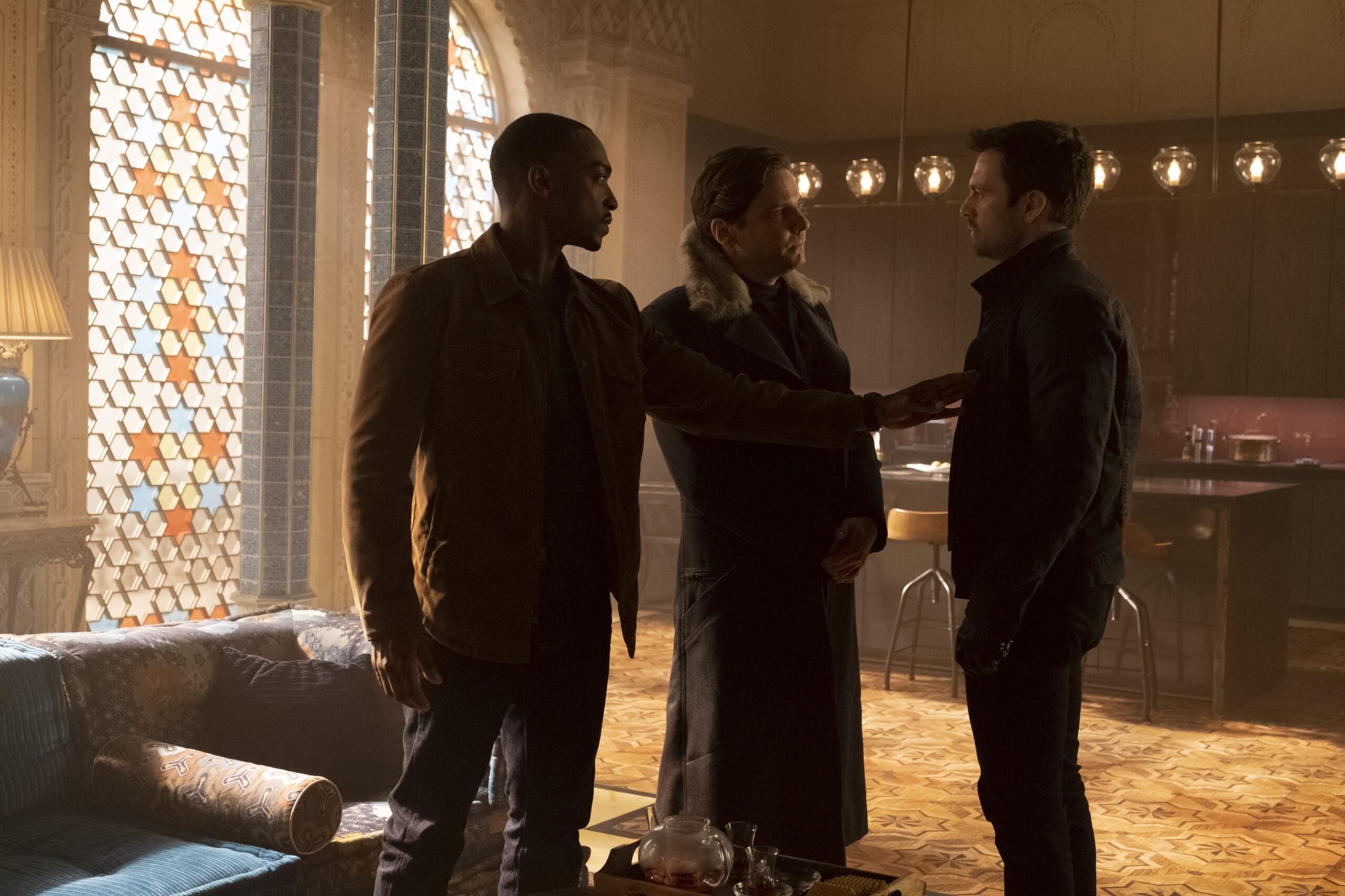 Eventually Zemo takes them to the funeral, just as cut-price Cap and Lemar show up, a few steps behind Bucky and Sam, as always. John has had just about enough and wants Karli brought in by any means necessary. Sam manages to get himself 10 minutes alone with Karli, to talk to her in an effort to get her change her ways.

It’s easy to empathise with Kali, she talks about how refugees were welcomed into any country during the time when half of the population had vanished, but they were then displaced again after the blip brought everyone back. This gives a good insight into her character and motivation, but at the end of the day she’s killing people, as Sam explains so it isn’t as simple as her doing the right thing.

Sam manages 10 minutes before Captain-angry looses his patience and bursts in, destroying any trust and rapport Sam built up during him and Karli’s heart to heart. All hell breaks loose, Zemo escapes, shooting Karli and managing to destroy her bum-bag full of super-soldier serum, just before she manages to get away. 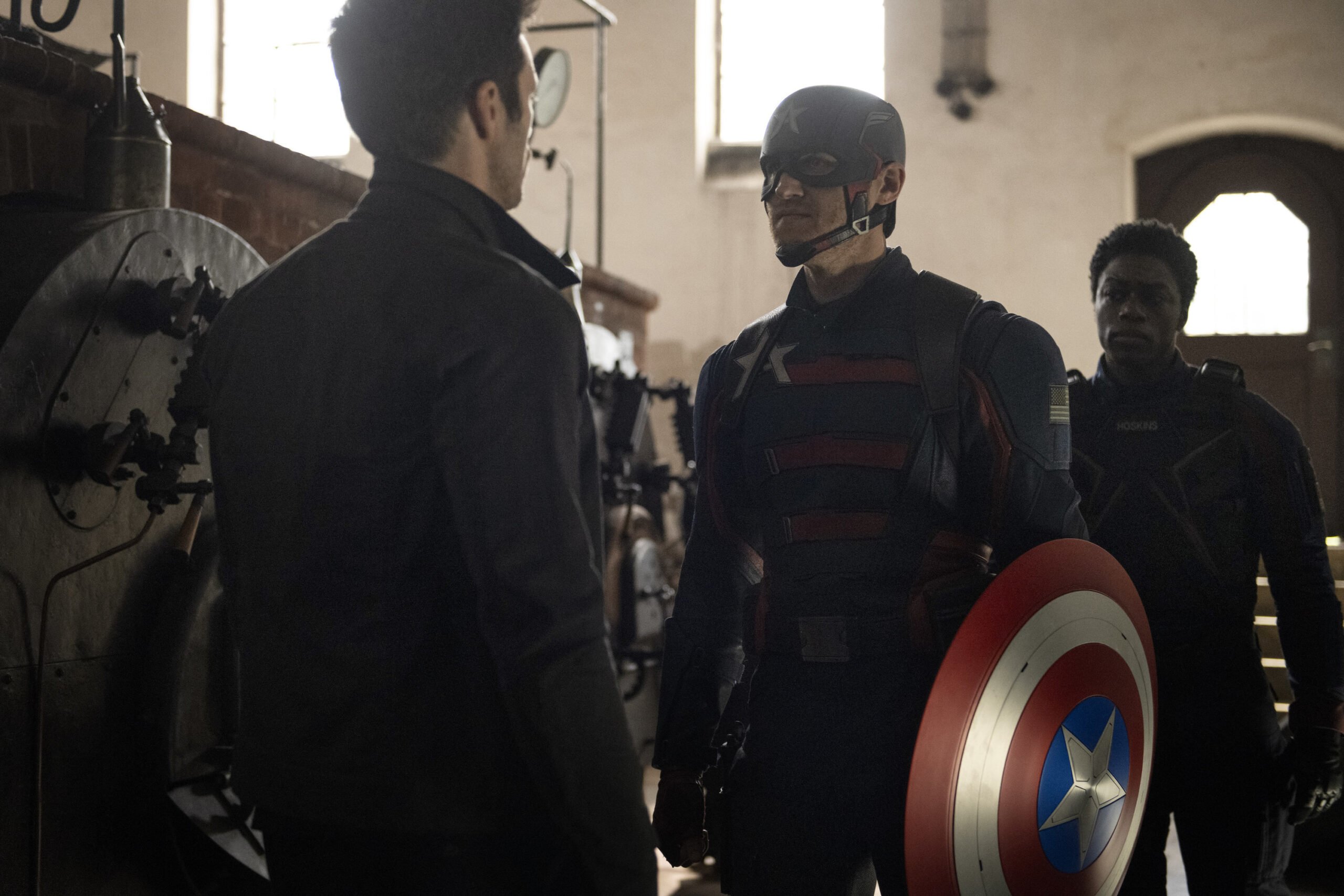 The twist in the tale is of course that one vial remained unbroken, and who should find it but an increasingly emasculated John Walker, who’s been buzzing to get himself some serum so that he can become a proper Captain America.

My favourite sequence comes next, when the Dora Milaje arrive to take Zemo. Cap puffs out his chest and states that the Dora Milaje don’t have any jurisdiction here, to which Ayo responds “The Dora Milaje have jurisdiction wherever the Dora Milaje find themselves to be” sick burn. Cap shows how little respect he has for the Wakandan warriors, who respond by wiping the floor with him, Lemar, Bucky and Sam who step in to try and calm the situation down.

Bucky is quickly put back in his place when Ayo relives him of his Vibranium arm with just a tap in the right place. She shows how she’s now done with Bucky when she refers to him simply as “James” not White Wolf, not even Bucky. In the same way your mum called you by your first name when you were in trouble, or when she wasn’t angry, just disappointed, Ayo makes Bucky understand just who he’s crossed at the expense of helping Zemo, and that the name ‘White Wolf’ is one that can easily be taken back. A similar reminder is given to John Walker when the Doras take his shield from him. It’s made of Vibranium you see, and although its painted red, white and blue, the way the Dora flicks it up and catches it reminds you exactly where it came from, and like Bucky’s name can be taken back anytime they feel is necessary. It’s given back to John of course, as it comes to light that Zemo has once again escaped, Henry Jackman’s Captain America: Civil War theme plays as Walker comes to terms with the fact he’s just been beaten again, only this time they weren’t even super-soldiers. 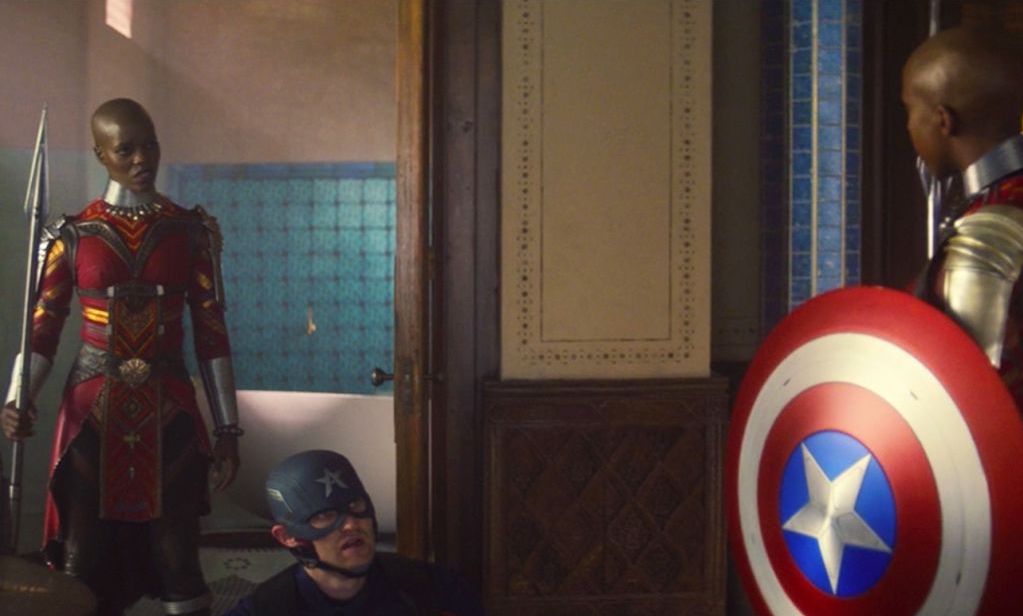 However much you dislike him at this point you really start to see John Walker unraveling, no matter how hard he tries he just cannot seem to gain the respect he feels entitled to. Each time something like this happens, he moves a little closer to the edge and it wont be long until he snaps. Don’t forget that he’s still holding onto a vial of serum like some sort of crazed Gollum.

So the stage is set for Walker to take the plunge and give himself a dose of super-serum. This is strengthened by a conversation with Lemar, who says that he would definitely take the serum if he was offered it. This is a mirror of a conversation Sam had with Zemo earlier in the episode except Sam stated he would turn the serum down. Walker is reminded by Lemar of what they had to go through in Afganistan, which may not have been all good but ended up seeing them given medals for.

Meanwhile Karli arranges to meet Sam and Bucky, via a conversation with Sam’s sister. It turns out to be a misdirection to take Sam and Bucky away from Karli’s real plan to trap and destroy John Walker, who Sam and Bucky now have to race across town to save.

When Lemar goes missing in the building he and Walker are lured to, a jacked-up Walker takes on the Flag Smashers and it quickly becomes clear that he’s had more than a little performance enhancing drug to help him along.

What follows is another brilliant action scene, Bucky and Sam join in, there is great shield tossing, Bucky does some cool stuff with knives while his Winter Soldier theme plays. In fact the action is very much reminiscent of that in Captain America: Winter Soldier, via John Wick.

The fight though, ends in tragedy, as Lemar is thrown against a pillar by Karli, killing him instantly. Walker is bereft, but soon switches to ruthlessness and bursts through a window chasing down one of the Flag Smashers, who begs and insists that it wasn’t him who hurt Lemar.

Walker doesn’t care though, and proceeds to beat the guy to death with the shield. The shield may have been given to Walker, but before him it belonged to Steve Rogers, and was seen around the world as a symbol of everything that was good, it represented hope and truth and now was being used in a brutal and shocking attack, live streamed for the whole world to see. 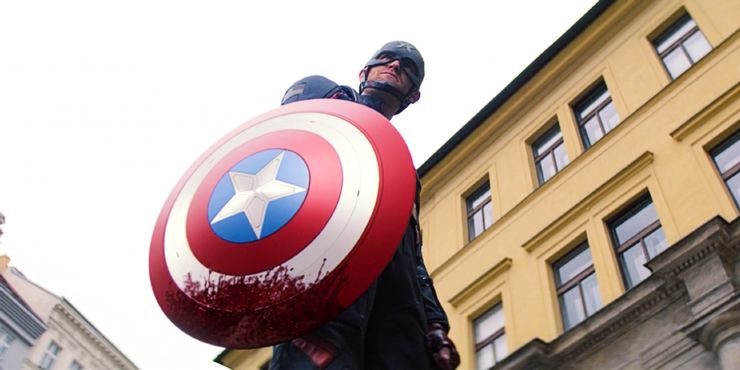 The episode ends as Walker stands over his victim’s lifeless body, blood drips from his shield, an image that he will surely find hard to escape.

We only have two episodes to go and its clear that Zemo disappearing down a drain (seriously, that guy) is the last of Bucky and Sam’s problems. Is this it for Walker now? Will he go rogue to avenge Lemar? Will we find out who the mysterious Power Broker is and just how annoyed will they be when they find out all their serum was destroyed?

As we approach the final 2 episodes I’m sure we are in for a lot more action before the end!