Skip to content
Home » Blog » ‘The Falcon and The Winter Soldier’ – Episode 6 Recap ‘One World, One People’ 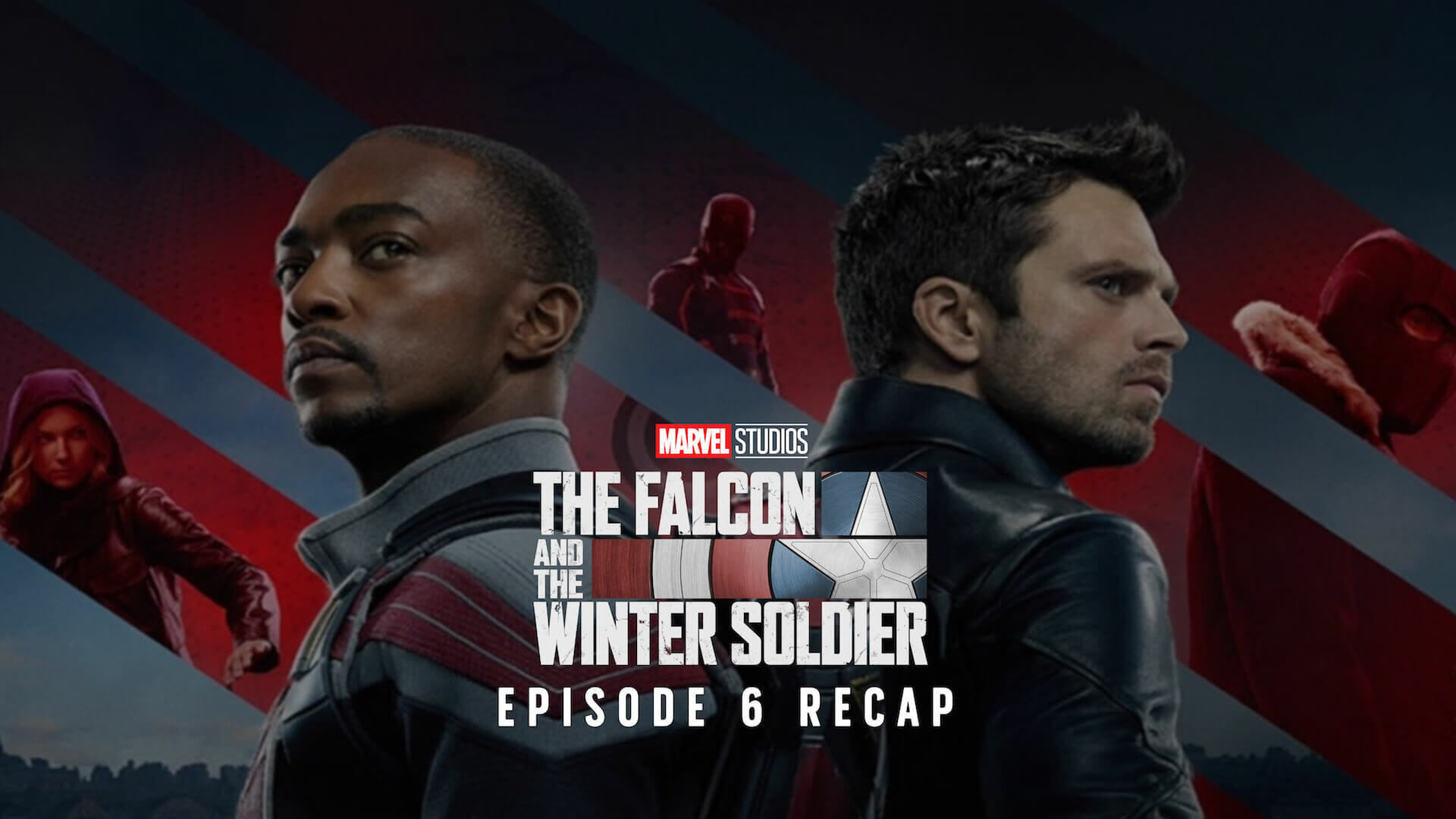 THIS RECAP CONTAINS SPOILERS FOR EPISODE 6 OF THE FALCON AND THE WINTER SOLDIER. IF YOU HAVEN’T YET SEEN IT, BOOKMARK THIS POST AND COME BACK TO IT ONCE YOU HAVE.

Six weeks after its first episode premiered, The Falcon and The Winter Soldier reaches its final episode. Everything that has been leading this conclusion, with a full cast of characters gaining closure to their individual and collective stories.

The series itself has successfully explored the mythology and history of Captain America as a metaphor for real world events. The shield represents the American flag, flaws and all and woven through it are themes of racism and social inequality.

Sam has spent the series struggling with the weight of the mantle of Captain America. His choices throughout the six episodes have taken his character to new emotional depths. The circumstances of each subplot has been used to further Sam’s character development, as well as his decisions regarding the shield. This has ensured that his transformation into a legacy character doesn’t feel forced or rushed.

The final episode opens with the Flag Smashers’ attack on the GRC HQ in New York. Karli has grown more and more desperate as the series has gone on, and now it seems she has a clear goal in sight – stopping the GRC vote at all costs. “These people will never stop, not unless we make them. It’s time” she says to the rest of the Flag Smashers and despite initially questioning her plan, they soon agree to go along with it.

With Bucky in place on the ground, Sam arrives in New York via his new Wakandan wings, he’s roped in some hired help and a shadowy figure reveals herself to be Sharon Carter. It turns out she was using the face masking tech used by Natasha Romanov in Winter Soldier. 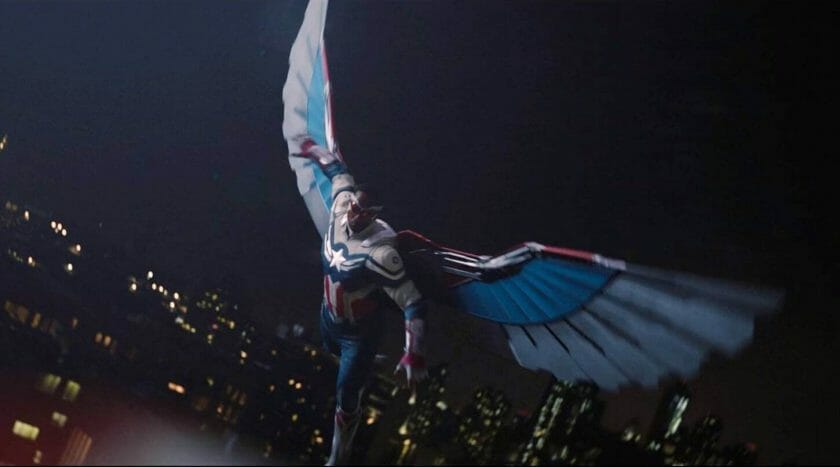 Sam makes his entrance in true MCU superhero style, smashing through a window mid-flight. As he rolls to his feet we get to see his brand new Captain America suit in all its comics-accurate glory, and it IS glorious. I feel like the suit was such an important thing to get right in this series. Sam taking up the mantle of Captain America was a big deal, and having a suit that is as true to the comics as possible makes things all the more special. In the comics, Sam gets his Falcon wings from Wakanda, more specifically from Black Panther, who builds the harness that helps him fly. Sam asks for Black Panther’s help, and its a significant part of Falcon’s origin story so its nice that they added that into Sam’s Captain America origin story here.

There are some spectacular arial action scenes involving Sam and a helicopter. Redwing is back and has received a massive upgrade (thanks Shuri) as Sam is busy saving a helicopter full of GRC hostages in the air. Bucky fends off the Flag Smashers on the ground, as they attempt to move more hostages via truck. As Bucky becomes outnumbered by Flag Smashers John Walker shows up, he’s out for revenge and makes Karli his target.

After last seeing Walker in the mid-credits scene of episode 5, arts and crafting his own shield from a dustbin lid, having him show up in this way is a nice final twist in his story arc. At times during the series he has felt like a villain, other times more of an antihero. As he joins the fight against the Flag Smashers, Walker is quickly outnumbered, hiding beneath his Blue-Peter shield he catches a glimpse of his Medal of Honour, it gives him the inspiration he needs and he bursts out, taking down Flag Smasher after Flag Smasher. Wyatt Russell has been excellent throughout the series, he gets his redemption in the form of helping Bucky take down the remaining Flag Smashers, and leaving Karli and his chance for revenge to help save the GRC hostages.

John Walker’s final moment is in a short scene in which Val (dont call her Val) tells him that things are about to get weird “and when they do, we might not need Captain America, but we might need a US Agent” – he has a new uniform, well its actually the same uniform but black. Its comics accurate too, but I cant help thinking they blew the wardrobe budget on Sam’s new star spangled Falcon suit. Expect more from John Walker / US Agent in future MCU projects for sure.

We find out from Karli and Batrock that Sharon was the Powerbroker all along, I called it right from her first appearance, it was glossed over quite quickly, except for during the episodes’ only mid-credits scene. Sharon gets her pardon and an offer of her old job back which she gratefully accepts, only to go outside and make a phone call in which she instructs someone to line up the buyers as she now has unlimited access to government secrets. Sharon being The Powerbroker will definitely have a bigger pay off further down the line.

Sam and Bucky, with the help of John Walker manage to get all of the Flag Smashers rounded up, and the GRC World leaders all safe and sound. The only major casualty is Karli, who ends up being shot dead. Just as we think things are over, as the remaining Flag Smashers are bundled into a van to be taken to The Raft ‘one world, one people” the guard whispers as he shuts the van door. Something else from this series that I don’t think we’ve seen the last of. Well, maybe not these guys in particular, as when the van drives away it blows up, cut to Zemo’s butler / pilot watching smugly from a nearby car. We then get a shot of Zemo in his cell on The Raft, even in the highest security floating prison Zemo is still pulling the strings. Or maybe Val is, maybe not, but she probably is. Maybe.

Bucky’s story arc is nicely wrapped up, as he returns to confess to Yori that he was the one who murdered his son when he was the Winter Soldier. He also makes a stop off at his therapist’s office, where he leaves her a gift, thanking her for helping him. It’s his notebook, with all the names crossed out, implying that he’s finished what he set out to do and made amends for the things he did in his past.

The greatest moments of the episode though, involve Sam and have nothing to do with any of the action sequences, the first comes in the form of a monologue he delivers to the GRC. He starts off by questioning whether they should be using terms like “terrorist” while they patrol refugee camps with guns, he calls them out for failing to help those in need and when they question him for not knowing what its like to have to make the kind of decisions he’s questioning, he replies by reminding them that he’s a Black man carrying the stars and stripes. It feels like the real climax of the series as everyone who Sam has had to justify his choices to throughout the six episodes look on proudly; Bucky, Sam’s sister, Sarah and Isaiah. Managing to win over someone who’s own experience made him of the opinion that no self respecting Black man would ever become Captain America is a big deal.

The series deserves high praise for Isaiah Bradley’s storyline. Having the theme of structural racism and its relationship with the stars and stripes and the legacy of a character like Captain America feels like a landmark moment for a Disney+ series. It was superbly written and brilliantly acted and the moment that Isaiah’s statue at the Smithsonian was revealed to him was deeply moving. Sam was able to bring peace to someone that was treated unjustly, by telling Isaiah’s truth and restoring his history. While it doesn’t make up for what was done to Isaiah, it is a start in recognising the problems of the flag that Sam represents, which is the overall theme of the series for Sam. His world isn’t perfect, but that isn’t going to stop him doing his best to help it.

As the series ends, Curtis Harding’s “On and On” plays and a familiar title card appears with a new twist, it reads:

“Captain America and The Winter Soldier”