The main theme of The Falcon and The Winter Soldier was the legacy of Captain America. Throughout the series, we were shown how that legacy impacted those who were connected to it. Sam struggled with the weight of his decision to turn down the title passed to him by Steve Rogers. As the show went on, the perspectives and actions of those around Sam helped influence his decision to take the title of Captain America, perhaps the most important of which was Isaiah Bradley. Although Sam would eventually make up his own mind, it was important for him to revisit Isaiah, and understand exactly what he went through and how it connected to the history of the shield he would be carrying. 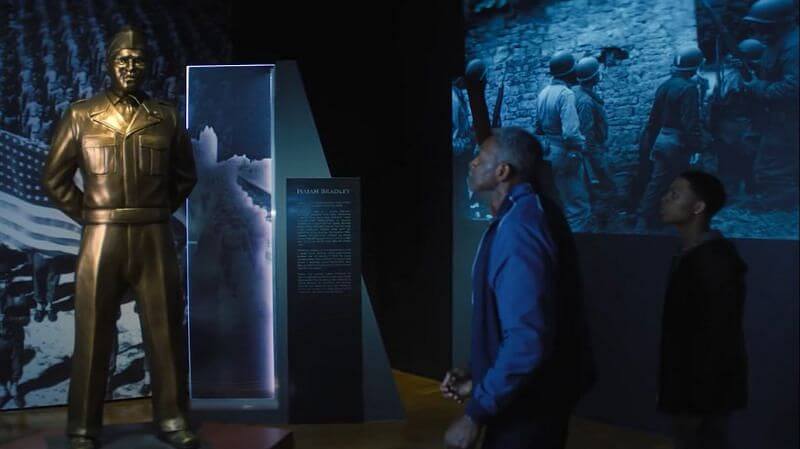 In the final moments of episode 6, Sam returns to see Isaiah, who acknowledges that Sam made the right choice – “you’re special, you’re no Malcolm, Martin or Mandela’ he tells him. It’s no coincidence by the way that the scenes with Isaiah were filmed in the neighbourhood that Martin Luther King Jr lived most of his life, his family home can be seen at the end of the street just 2 blocks away from Isaiah’s house. While Isaiah doesn’t explicitly state that Sam made the right decision, his understanding of Sam’s reasons is the acknowledgement Sam needs.

After telling him that he has something to show him, Sam takes Isaiah and his grandson Eli to the Smithsonian, where an update to the Captain America exhibit has been given an update. As well as a statue of Isaiah proudly standing in his military uniform, there are images, and an engraving that tells Isaiah’s full story.

The full text of the engraving reads:

Isaiah Bradley is an American Hero whose name went unknown for too long.

Isaiah was one of a dozen African-American soldiers who were recruited against their will and without their consent for participation in human testing in pursuit of the super-soldier serum. Most did not survive. The few who lived through testing were sent on secret missions during the Korean War. During the conflict, against all odds Isaiah Bradley rescued his fellow soldiers and 28 other POWs from behind enemy lines.

However, fearful of the ramifications of a Black super soldier some individuals within the government tried to erase Isaiah’s story from history. His family was issued a falsified death certificate and for decades the truth of his unflinching bravery was buried.

Isaiah Bradley will now be recognised as a hero, his truth has been told and his part of the Captain America legacy will now live on forever. It was the perfect endpoint for a series that looked deep into what it truly means to be a hero and the perfect starting point for Sam Wilson’s time as Captain America.